Accessibility links
Interview: Tim Weiner, Author Of 'One Man Against The World' : It's All Politics In his new book, New York Times journalist Tim Weiner paints a portrait of a president overwhelmed by wars at home and abroad, whose self-destructive behavior resulted in "political suicide." 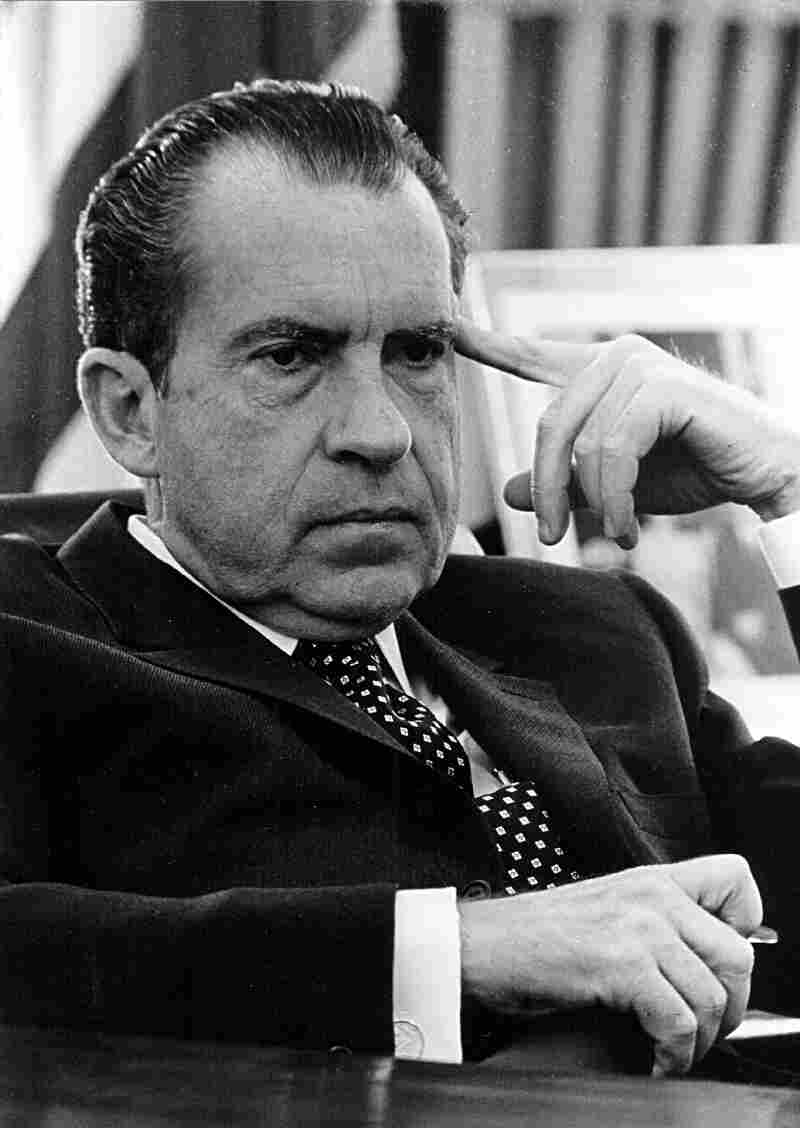 In his new book One Man Against the World, Tim Weiner explores some of the questions surrounding the presidency of Richard Nixon, pictured above in the Oval Office on Feb. 19, 1970. National Archives/Getty Images hide caption 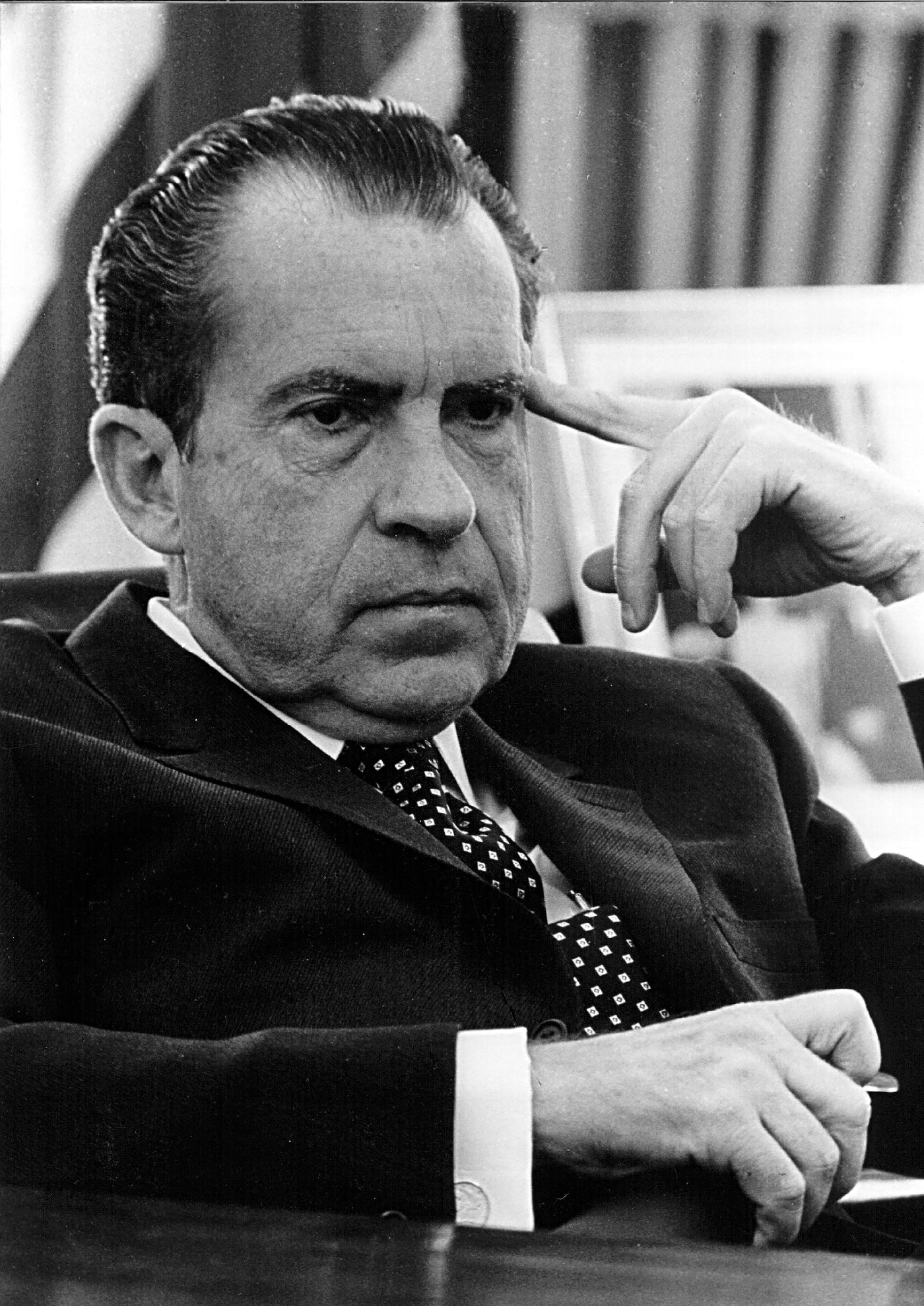 In his new book One Man Against the World, Tim Weiner explores some of the questions surrounding the presidency of Richard Nixon, pictured above in the Oval Office on Feb. 19, 1970.

Richard Nixon's presidency has always been one surrounded by questions and controversy: Why did he wiretap his own aides and diplomats? Why did he escalate the war in Vietnam? Why did he lie about his war plans to his secretary of defense and secretary of state? What were the Watergate burglars searching for, and why did Nixon tape conversations that included incriminating evidence?

Tens of thousands of files from the Nixon White House, National Security Council, CIA, FBI, State Department and Pentagon were declassified between 2007 and 2014. Hundreds of hours of Nixon's tapes were made public in 2013 and 2014. After having pored over these documents, Tim Weiner provides answers to these and other questions in his book One Man Against the World: The Tragedy of Richard Nixon.

Nixon was consumed by fear, Weiner tells Fresh Air's Terry Gross. That fear "turned into anger and that anger turned into self-destruction and every hour of these new tapes and these released transcripts adds to the record of a man committing political suicide day-by-day," he says.

Nixon was waging fights both at home and abroad. "In Vietnam, he had a weapon — B-52 bombers," Weiner says. "At home, he had bugs, break-ins, black bag jobs and burglaries. The two wars became one: Vietnam morphed into Watergate. He said so himself — Nixon did — that Vietnam found its successor in Watergate."

On the challenges Nixon faced when he assumed office

Richard Nixon, we must remember, had lost by just a hair's breadth of a vote to John F. Kennedy in 1960 in the presidential election. He had won election as president in the greatest resurrection since Lazarus in 1968, by a tiny fraction of the vote — less than 1 percent and only 43 percent of the vote. He was determined from the day he was sworn in to be re-elected by the greatest landslide in American political history. To do that, he had to somehow settle the Vietnam War.

It has always been a mystery and I think that mystery is now revealed with the release of these last tapes and with the release of the daily diaries of his faithful chief of staff, H.R. Haldeman. ... The chairman of the Democratic National Committee was a Kennedy man — political wheeler-dealer in his own right named Larry O'Brien — and they had considerable political dirt on Larry O'Brien including the fact that he was on a secret retainer from the increasingly lunatic billionaire, Hollywood producer, Las Vegas casino owner and hotel magnate Howard Hughes.

They had that dirt on O'Brien but they wanted to know what dirt O'Brien had on Nixon — and that's why they went into the DNC headquarters to try and raid and bug. They wanted to do political counterintelligence, espionage. Their next target, the Watergate burglars, if they hadn't been arrested that night, was the campaign headquarters of George McGovern, who became the Democratic nominee in 1972, much to Richard Nixon's delight. 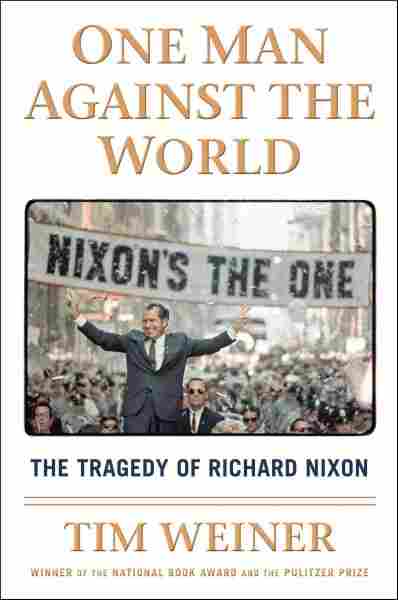 The Tragedy of Richard Nixon

It was almost entirely based on domestic-political opposition to the war in Vietnam, it was another front in the Vietnam War, the domestic front. The goal was to make sure through political espionage and sabotage, one: that Nixon knew everything that his political opponents were up to and, two: that they could ensure that the weakest possible democratic candidate was nominated in 1972 and in this, they succeeded.

They had spies trailing Teddy Kennedy ... they had spies trailing and sabotaging the campaign of Sen. Ed Muskie of Maine who was the front-runner at one point. They were absolutely delighted when George McGovern, who was the farthest to the left of the senators who could have won the nomination, did in fact win. It was all to guarantee Richard Nixon's re-election by a landslide in 1972. He won by 18 million votes, the greatest margin numerically in American political history.

He did it because he planned to write a post-presidential memoir that would make him millions of dollars and that he and only he would have access to the tapes. And, in fact, for 20 years only he had access to all but a handful of these tapes. He also planned to use them as a defense against the inevitable memoirs of Henry Kissinger — no one writes a memoir in which he comes out looking like a fool or anything less than wise man. He thought it would be a unique resource that would be worth millions. 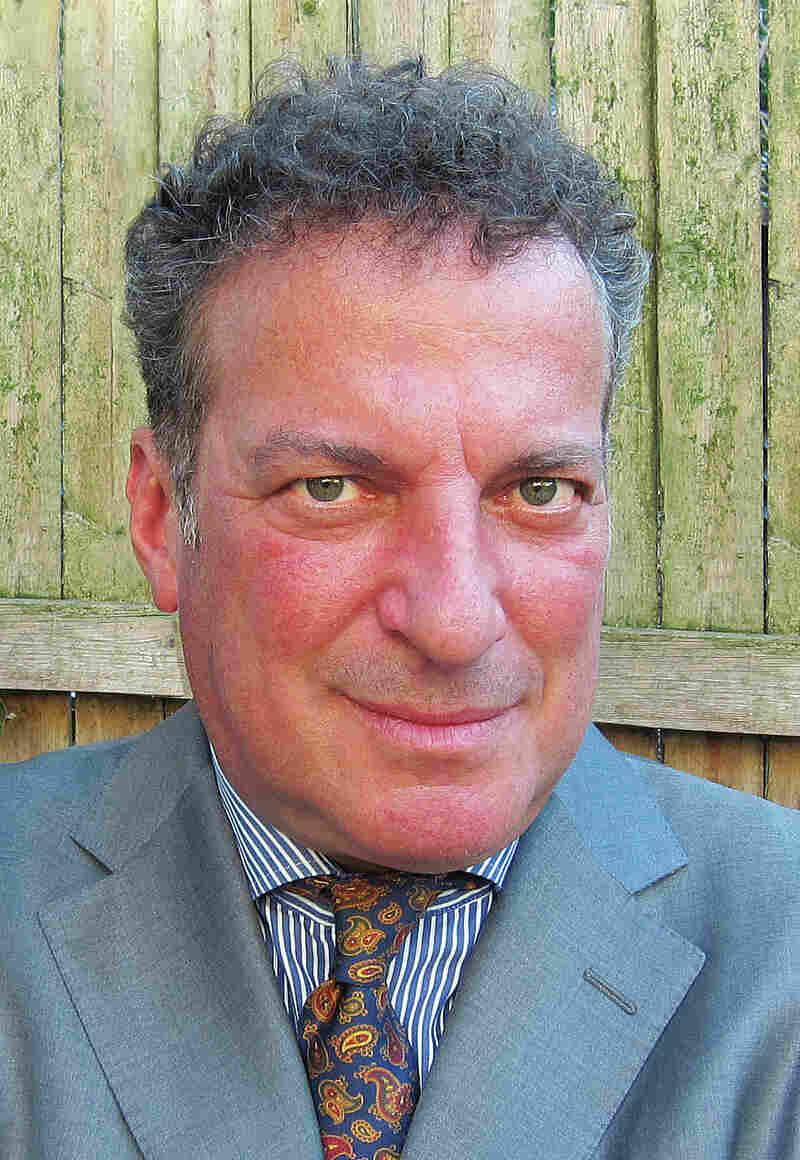 Tim Weiner, a Pultizer Prize-winning New York Times reporter, is the author of four other books about national security, including Enemies: A History Of The FBI. Courtesy Henry Holt & Co. hide caption 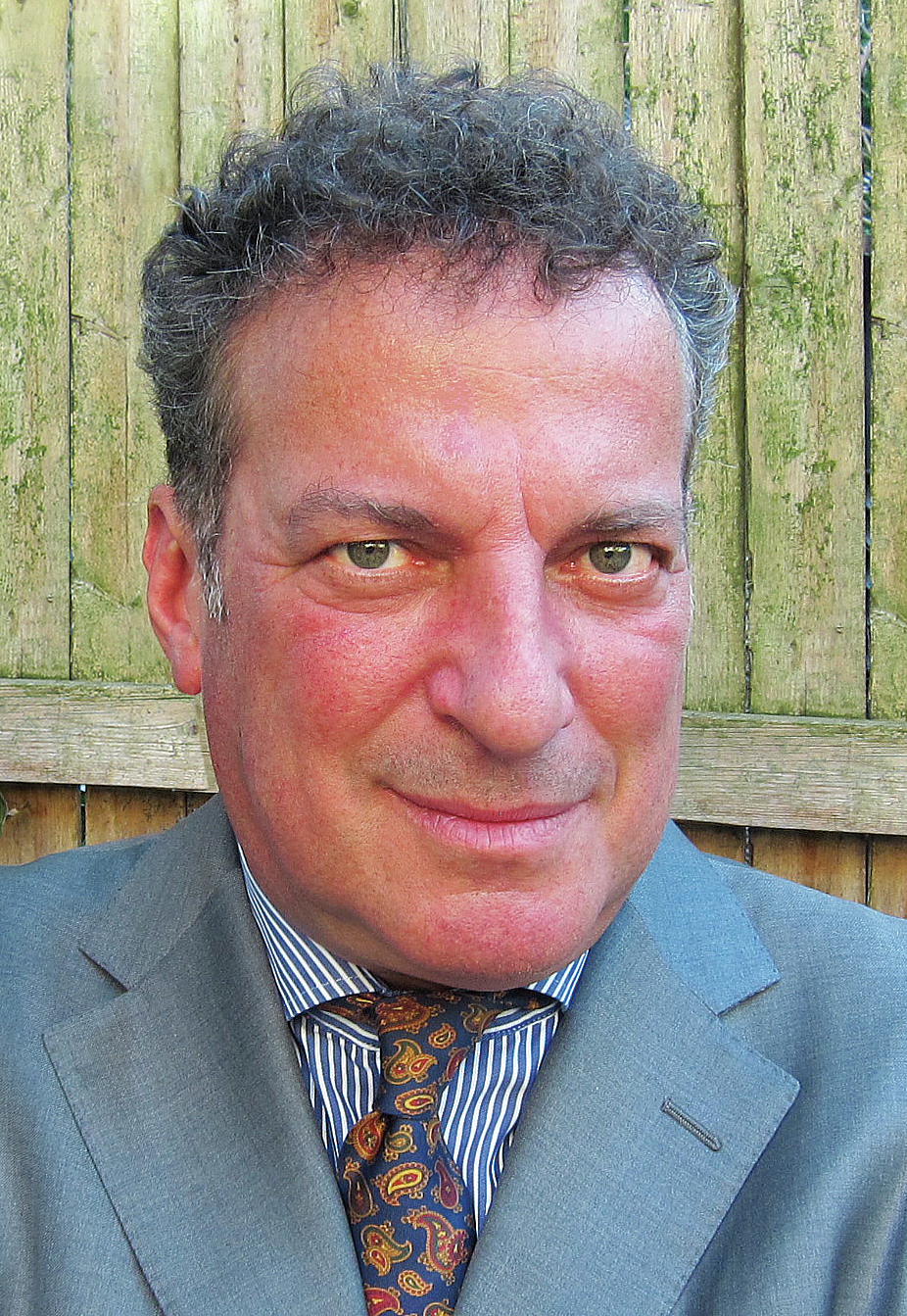 Tim Weiner, a Pultizer Prize-winning New York Times reporter, is the author of four other books about national security, including Enemies: A History Of The FBI.

Why didn't he destroy the tapes? Because he wrote himself a memo soon after their existence was revealed at the Watergate hearings, "Should've destroyed the tapes." He could have and he probably could've gotten away with it because there were only nine tapes under subpoena at that time, but the problem is, as all his presidential counselors and lawyers agreed, who was going to strike the match? It would have to be the president himself, and he probably could've gotten away with it, although there would've been a hell of a constitutional cataclysm.

But who was going to strike the match? One of them jokingly said, "King Timahoe?" who was the president's not-very-faithful Irish setter.

On Nixon signing legislation because he had no other choice

He had to sign the Environmental Protection Act because Congress had passed it and they probably would've overridden his veto. He had to obey the Supreme Court in terms of school busing for desegregation — he would've had to fight a long line of Supreme Court decisions going back to Brown vs. Board of Education in 1957 to stop the desegregation of the United States, even though he himself said he wanted to "bring us together," he said, "I can't talk to black people unless they're Uncle Toms."

How Nixon Re-Shaped The Presidency

How Nixon Re-Shaped The Presidency

On the secret bombing of Cambodia

What was secret about the secret bombing of Cambodia was that the military records of the bombing were falsified, which is a violation of the rules of war and American military code of justice. The pilots who took off knew they were hitting Cambodia, the crewmen didn't. The pilots were vectored — the filed plan was to hit a certain enemy target in northern South Vietnam or southern North Vietnam, the actual target was inside Cambodia. The pilots were vectored into their targets through a signal from the United States Embassy in Laos or Thailand. We didn't have a functioning embassy in Cambodia at the time. There would be two sets of flight plans filed — one true and one false and this was not revealed until 1973.

On Nixon's problem with alcohol

It was October 1973. ... There's a raging war in the Middle East between the Syrians and the Egyptians on the one side and the Israelis on the other, known as the Yom Kippur War. It escalates. The Israelis aren't winning. The Soviets want to interpose, together with the United States, U.S. and Soviet forces in the Middle East to stop the war and then, they say: "If you won't do it, we will go in there alone." The United States discovers that the Soviets are shipping nuclear warheads to Egypt.

Nixon, as had been his habit, drank too much, was terribly deprived of sleep, he was a ravaging insomniac, and he went days on end drinking himself to sleep during these days of crisis. There's a meeting in the White House situation room, it's Oct. 24th, 1973. Henry Kissinger is there, Adm. Tom Moorer, chairman of the Joint Chiefs of Staff are there, secretary of defense, the head of the CIA. The president was not there, and they say to one another: "What are we going to do here? The Soviets think we have no functioning president."

Tim Weiner, on Nixon's state at an important moment during the Yom Kippur War

In the absence of a functioning president, these five men, unelected, led by Henry Kissinger, decide to raise the global nuclear alert level to one-step short of imminent nuclear war, alert the 82nd Airborne Division and recall 75 B-52 nuclear bombers to make it look like we are ready to go to World War III. But at the end of this meeting, the chairman of the Joint Chiefs, Adm. Moorer writes, "If the Soviets put 10,000 troops into Egypt, what do we do?" The answer is, "We might've done nothing," because we did not have a functioning president.

The president was drunk. The president was in the family residence at the White House — had drunk himself to sleep, and was by all evidence, not in his right mind at that moment. He had said that day to Henry Kissinger, that his enemies and I quote: "They want to kill the president. I may physically die." There are real threats along with these roiling fears because that same day, Oct. 24th, the House for the first time since 1868, has opened formal proceedings to impeach the president of the United States.

Read an excerpt of One Man Against the World