Accessibility links
Clinton Walks Delicate Line On Trade, Economy In First Press Conference : It's All Politics The Democratic presidential candidate called the current stalemate in Congress a "process issue" and also addressed the question of her family's finances. 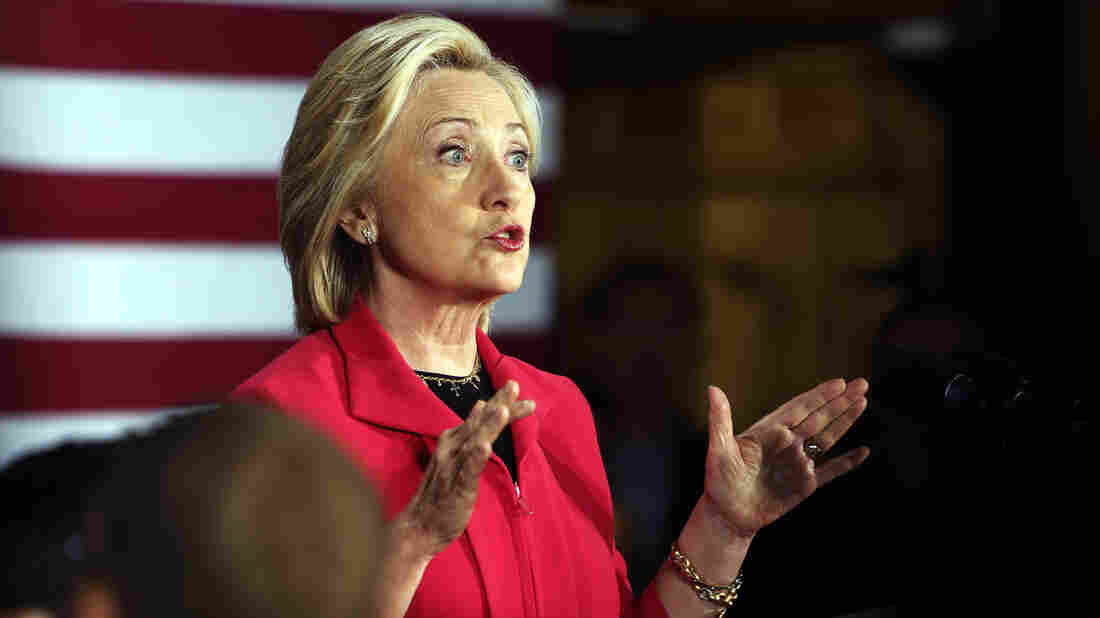 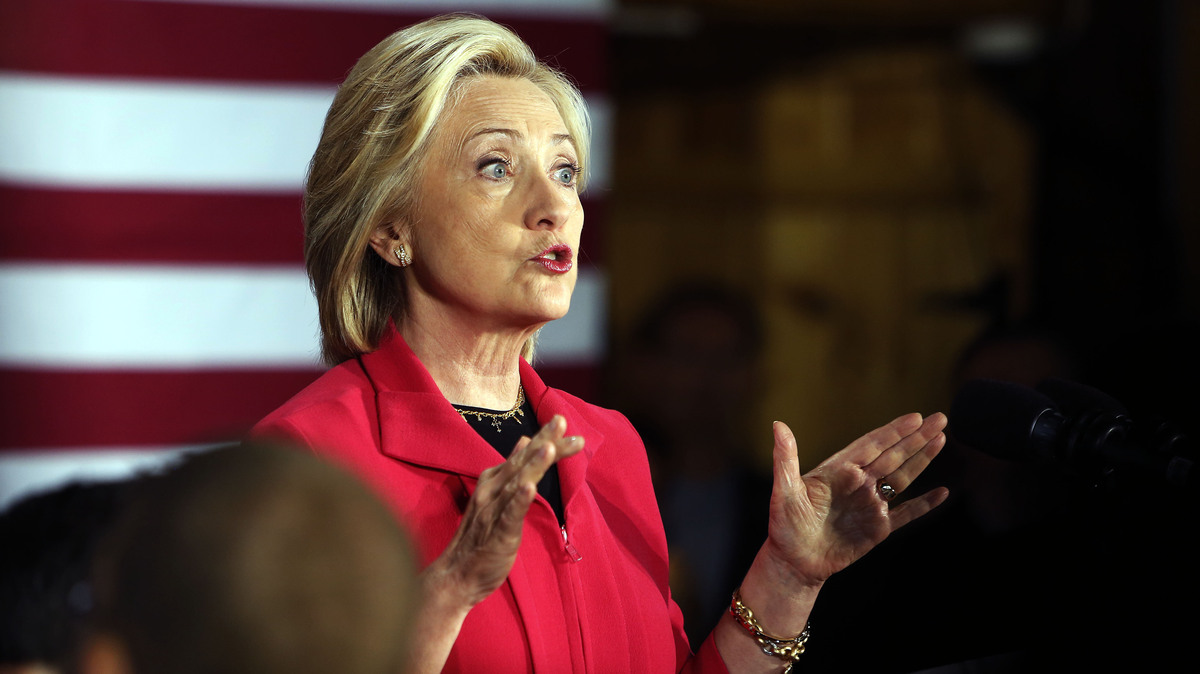 After a campaign event in New Hampshire on Monday, Hillary Clinton held her first press conference since becoming an official candidate for president.

Hillary Clinton walked a delicate line on trade as she held her first official press conference of her campaign on Monday.

Instead of staking out a clear position on whether she supports the current Trans-Pacific Partnership (TPP) trade deal and fast-track authority for the president, the Democratic presidential candidate instead dismissed the current stalemate in Congress as a "process issue."

"I think this is chance to use this leverage so the deal does become one that more Americans and more members of Congress can vote for," the former secretary of state said after a campaign event in New Hampshire. "I will wait and see what the deal is, and then I will tell you what I think about it."

On Friday, House Democrats dealt President Obama a stinging blow when they rejected a key part of the trade package that would allow for funding for training and education for workers would lose their jobs because of the Pacific Rim trade deal. Even an 11th hour visit by President Obama to Capitol Hill couldn't sway enough votes from his own party. The White House dismissed the failed vote as a "snafu" and House Republicans will try again this week.

Progressive Democrats, who have led the charge against the trade package, have grown frustrated that Clinton hasn't taken a concrete position on the deal. Her surging Democratic rival, independent Vermont Sen. Bernie Sanders, has been a leading critic of the TPP in the Senate. As secretary of state, she once called the TPP the "gold standard in trade agreements."

Now, taking reporters questions for the first time in months, Clinton blamed the secrecy of exactly what is in the deal for its failure and tried to downplay her husband, former president Bill Clinton's, history of championing free trade agreements, including the controversial North American Free Trade Agreement (NAFTA).

"The issue for me is, what's in the deal? And I think now there's an opportunity for the president and his team to reach out and meet with the people who have said on the floor, like [House Minority Leader] Nancy Pelosi did, that we need a better deal," she said.

Clinton suggested that the White House could work with Democrats who could be swayed to assuage their concerns and get a better outcome on the bill.

"I believe that you take whatever happens to you in a negotiation and you try to leverage it," the former New York senator said.

The nearly 20-minute question-and-answer session also ended a long drought with the press. After she announced via social media in April that she was running for president, Clinton had answered few questions or shrugged many off, even as there were mounting concerns about her private email server at the State Department and donations to her family's charitable foundation. But with her official launch on Saturday in New York City, her top aides indicated that hesitation would change.

In her press conference Monday, Clinton also tried to walk a fine line on President Obama's struggles to revive the American economy. She argued that he was handed a difficult situation just after he was elected in 2008 but that she would be laying out her own plan to create jobs and spur growth.

"When the president came into office, the deck was at the bottom of an abyss," she recalled. "I don't want us to live in a state of collective amnesia about what we're facing."

"I will be laying out policies that I think builds on what the president has done, what my husband has done, what other Democrats have done, what even other Republicans have done," said Clinton. "I think President Obama has done a lot that has put us in a good position, and I will go further."

Clinton also addressed the question of her family's own finances — she took heat a year ago after saying her family was "dead broke" after leaving the White House, but they are now earning hundreds of thousands of dollars in paid speeches. She framed it instead as a story of success and hard work with the help of others.

"I want everybody to have the same opportunities that I had and that my husband had. He faced a lot of obstacles in his life and had a great set of people who urged him on and supported him," said Clinton.

"I don't think Americans are against success — I think Americans are against people who get on the top of the ladder and start pulling it up so nobody else had the same chance that they had, and then act as though they pulled themselves up by their bootstraps and the log cabin they built themselves," she added. "At some point, we're all in this together, and those of us who do have opportunities ought to be doing more to help other people have the same."

Clinton laughed off a question about what advice she would have for another candidate dealing with both the advantages and baggage of a famous last name — Republican Jeb Bush, who announced his campaign for president just after Clinton was finishing her remarks.

"I'm going to let the Republicans decide who their nominee ends up being," said Clinton. "I'm running on my record and on my positions, but I'm very proud that I have experience alongside my husband in the White House and serving with Barack Obama as secretary of state."