Accessibility links
5 Things You Should Know About Donald Trump : It's All Politics "The Donald" has high national name recognition and has made forays into politics before. He was once one of several contenders for the nomination of the Reform Party and won a primary.

5 Things You Should Know About Donald Trump

5 Things You Should Know About Donald Trump 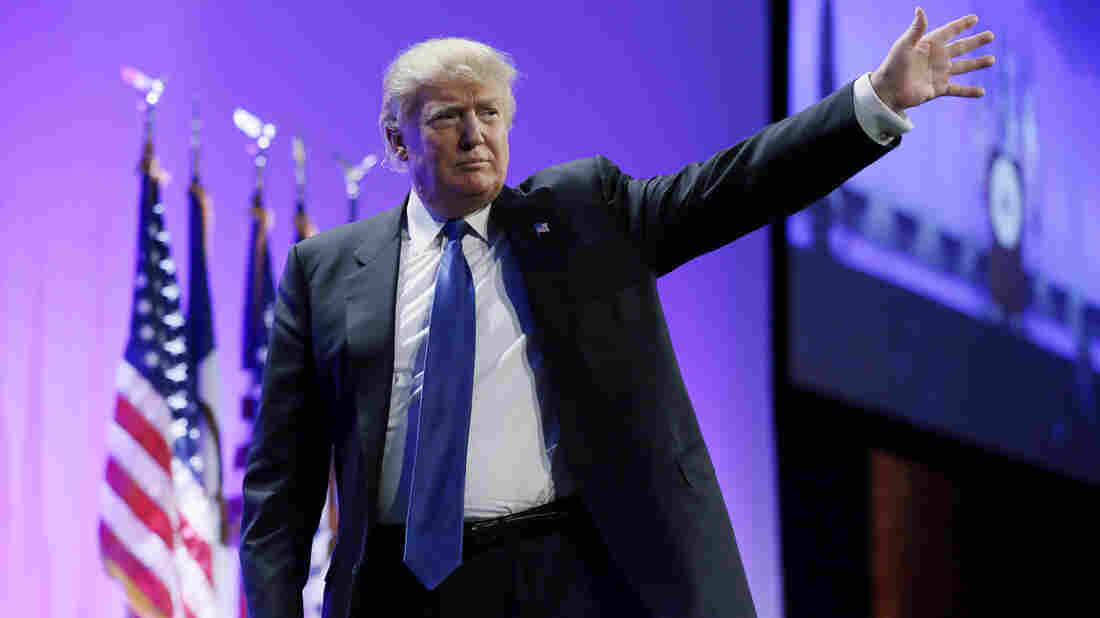 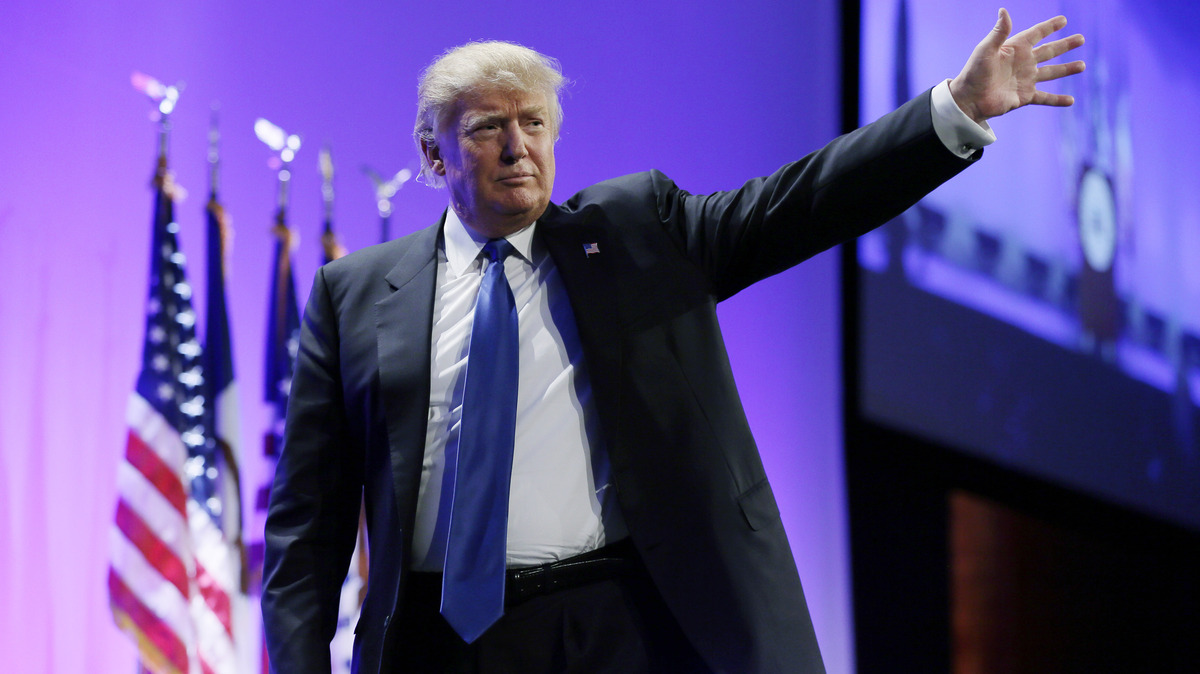 The 2016 presidential race has attracted the widest and most diverse field of major candidates in anyone's memory. Yet, even in this crowd, Donald John Trump Sr. stands apart. On Tuesday, he joined that field, two days after his 69th birthday.

Donald Trump, or "The Donald" as he often styles himself, has high national name recognition as a billionaire real estate developer and TV celebrity.

He is known for his signature properties — Trump Plaza, 40 Wall Street in Manhattan; golf resorts in Florida; and casinos in Atlantic City — and for his successful run as a reality TV star on The Apprentice and The Celebrity Apprentice.

He has made highly publicized forays into national politics on occasion over the past two decades. Late in 1999, as the presidency of Bill Clinton wound down, Trump was one of several contenders for the nomination of the Reform Party, the remnant of the third-party movement begun by billionaire H. Ross Perot in 1992.

Trump eventually withdrew from that contest, but in 2008 and 2012 he talked of seeking the Republican presidential nomination, and in the latter cycle he remained a vocal critic of President Obama's policies at home and abroad. He also appeared often with other candidates and prospective candidates, such as Sarah Palin. 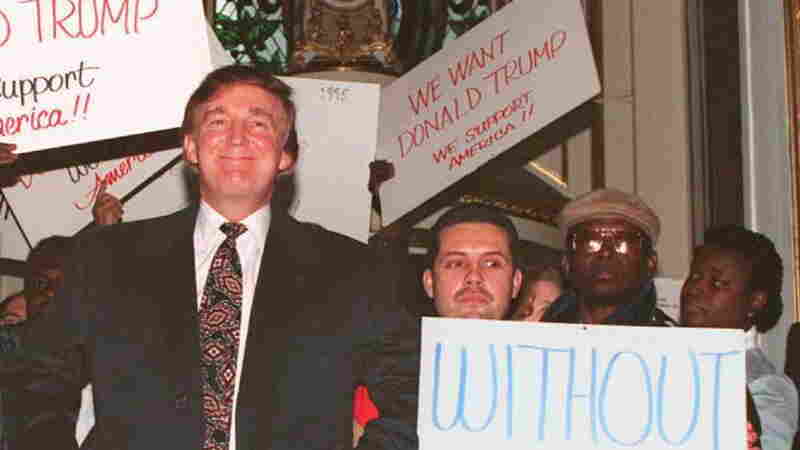 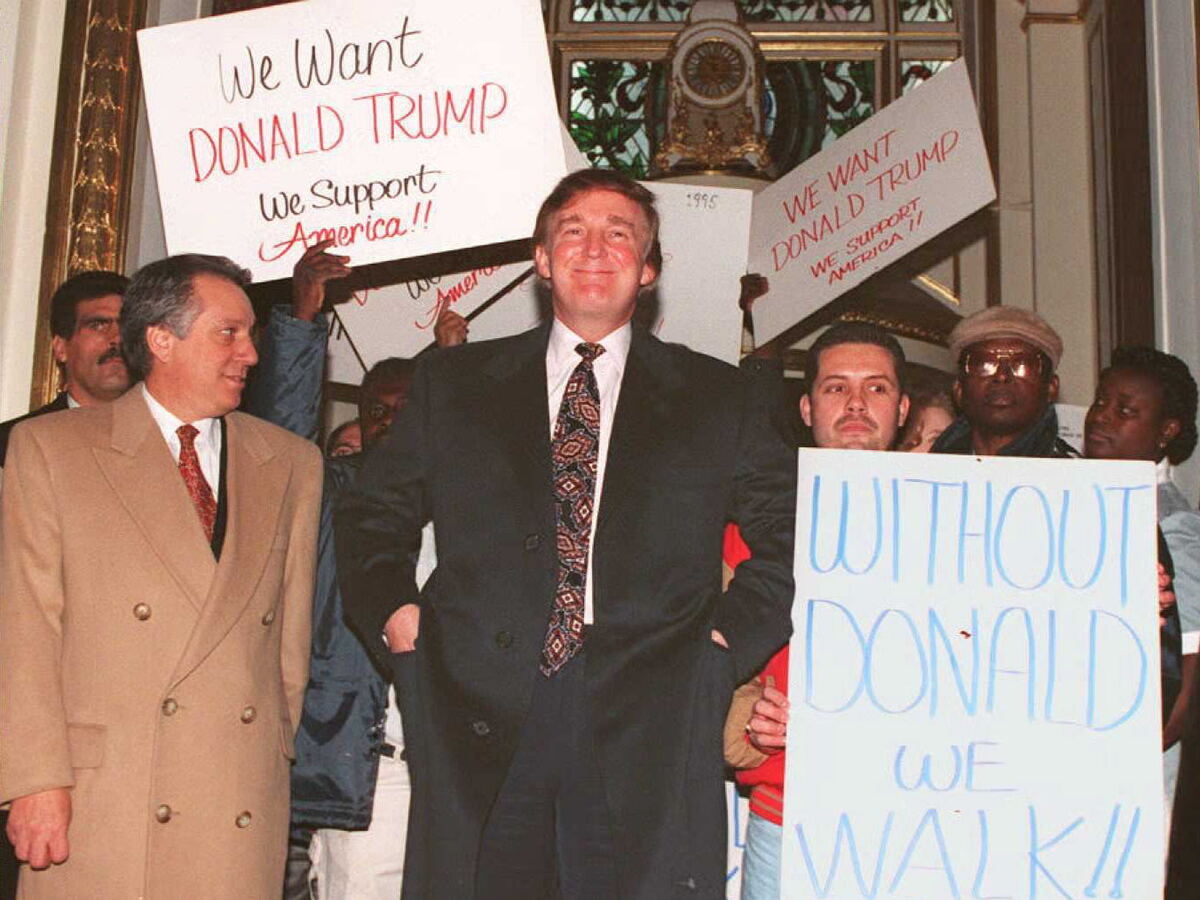 Donald Trump at the Plaza Hotel in New York in 1994.

Trump was among those sustaining the so-called birther movement well after the original copy of the president's birth certificate from Hawaii had been released. The challenge to the president's eligibility for the office was based on allegations that he was actually born in Kenya or another African country. Even after definitive documents from Obama's birth in Hawaii in 1961 were authenticated and released, Trump was still insisting he was not convinced.

Known for his big personality even as a child, Trump was sent off to the New York Military Academy at age 13 to learn discipline. Responding to that environment, he later enrolled at Fordham University and then completed his degree at the University of Pennsylvania's famed Wharton School of finance. He then went into business with his father, a developer of middle-class housing in Queens and other outer boroughs of New York, but he soon refocused on Manhattan and went on using leverage to participate in higher-risk, higher-reward projects.

Trump had circled the political arena in previous cycles without really getting in. This time he's in — and he has been drawing about 5 percent among Republicans in some national polls. That would be good enough to qualify for the Fox News debate on Aug. 6, which will feature the top 10 candidates in an average of national polls.

Here are five things to know about The Donald.

Although his actual net worth has been a matter of dispute, particularly after business reversals in the early 1990s, Trump has survived a now-distant flirtation with bankruptcy and is estimated to be worth $4.1 billion by Forbes magazine. Forbes ranks him 133rd richest among American billionaires (388th among global billionaires). However, Forbes gives him just a 5 on the "self-made" scale of 1-10, where 1 connotes entirely inherited wealth and 10 an extreme case of rags to riches.

On Tuesday, after his political rally, Trump is expected to release a summary of assets that total $9 billion, the Washington Post reports. That number would include valuations on his real estate.

2. He has won a presidential primary in a major state

In 2000, Trump was among five candidates listed on the Reform Party primary ballot in California. He had filed papers the previous autumn to become a member of that party and one of its presidential candidates. Although he had withdrawn from the race months earlier and did not campaign for the primary in California, he received 15,311 votes in the June event, 44 percent of the total. 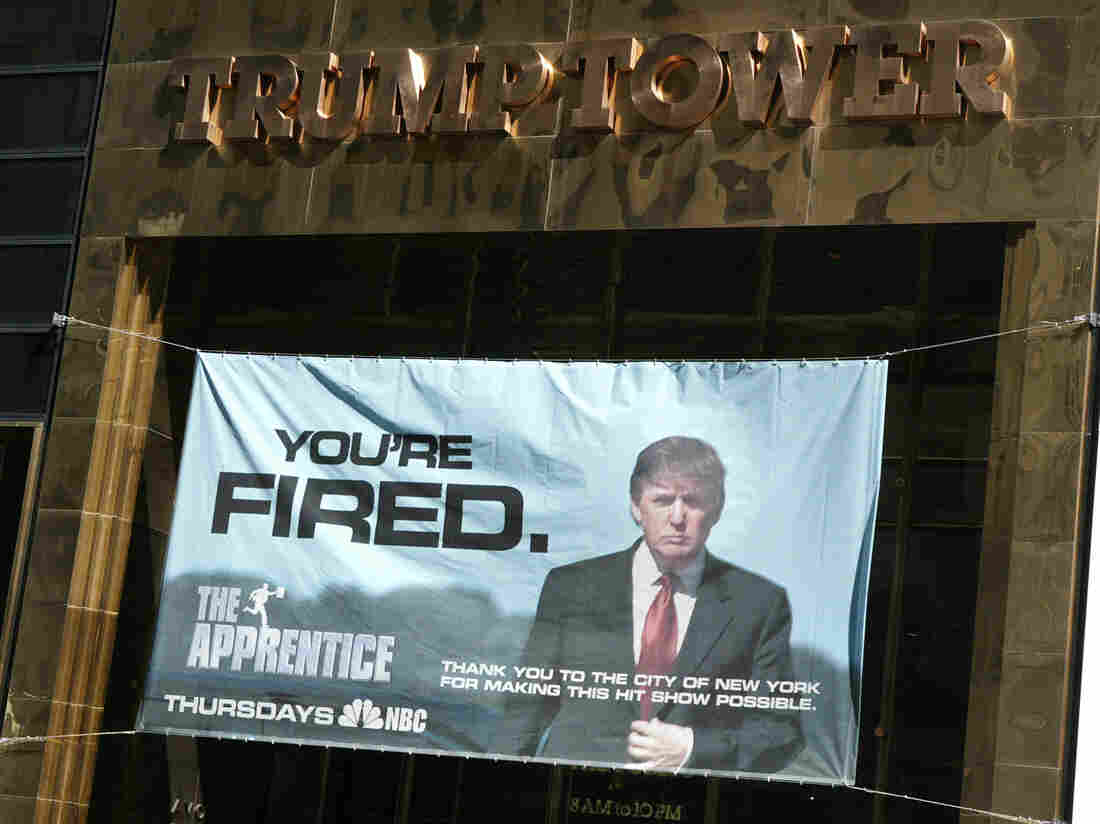 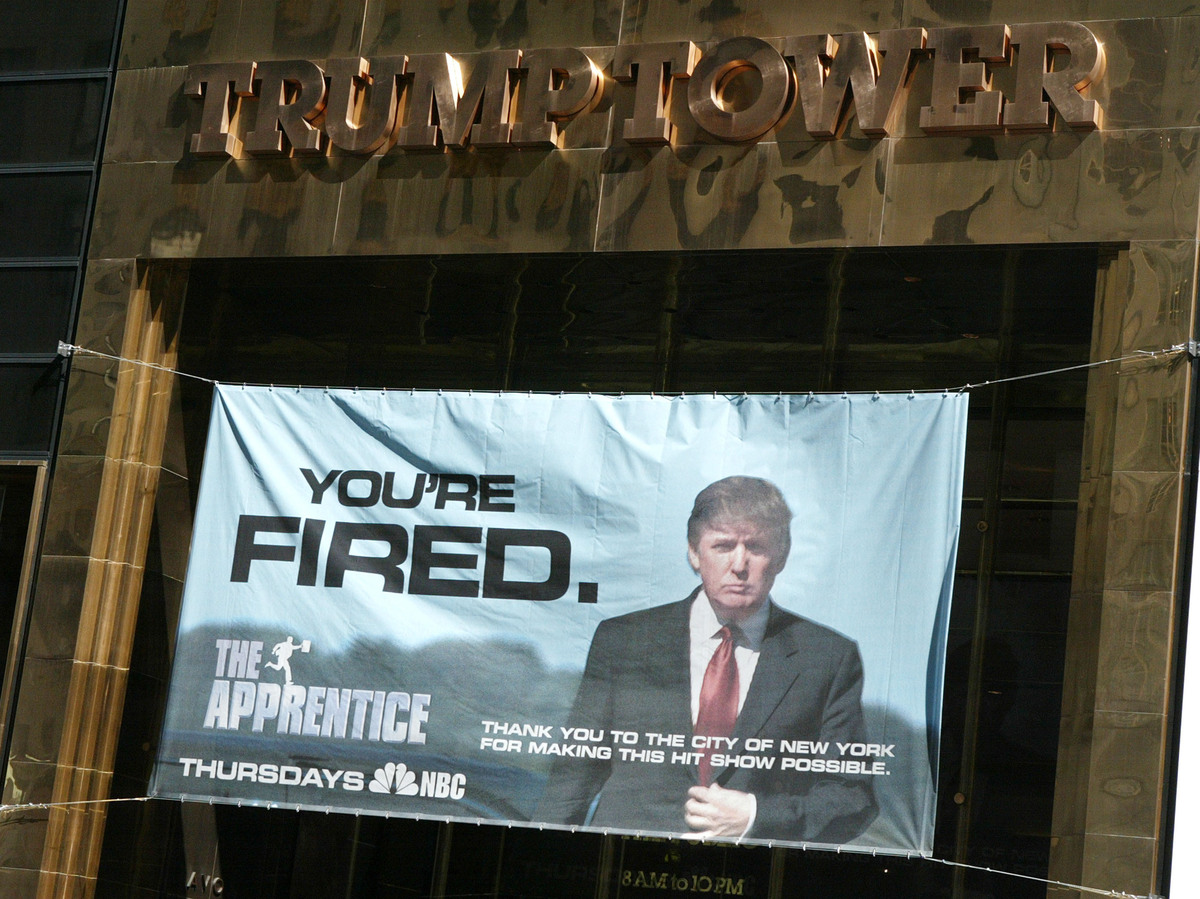 3. He has been a reality TV star

His NBC TV show The Apprentice featured Trump schooling ambitious young people and was a hit practically from its introduction in 2004. It was later reborn as The Celebrity Apprentice. Trump has also been a frequent guest on TV talk shows, including The Late Show With David Letterman. Between 1993 and 2015 he appeared on "Dave" 21 times, the same as comedian Jon Stewart. He has also been a staple in TV ads for various products.

4. His big breakthrough in business came when he was just 34

He obtained an option to buy the old Commodore Hotel near Manhattan's Grand Central Station. Trump and various partners redesigned that grand dame as a glass showplace that became the Grand Hyatt, a major hit after extensive restoration of Grand Central itself. He later bought and renovated the iconic Plaza Hotel at the southeast corner of Central Park and the Barbizon at the southwest corner. 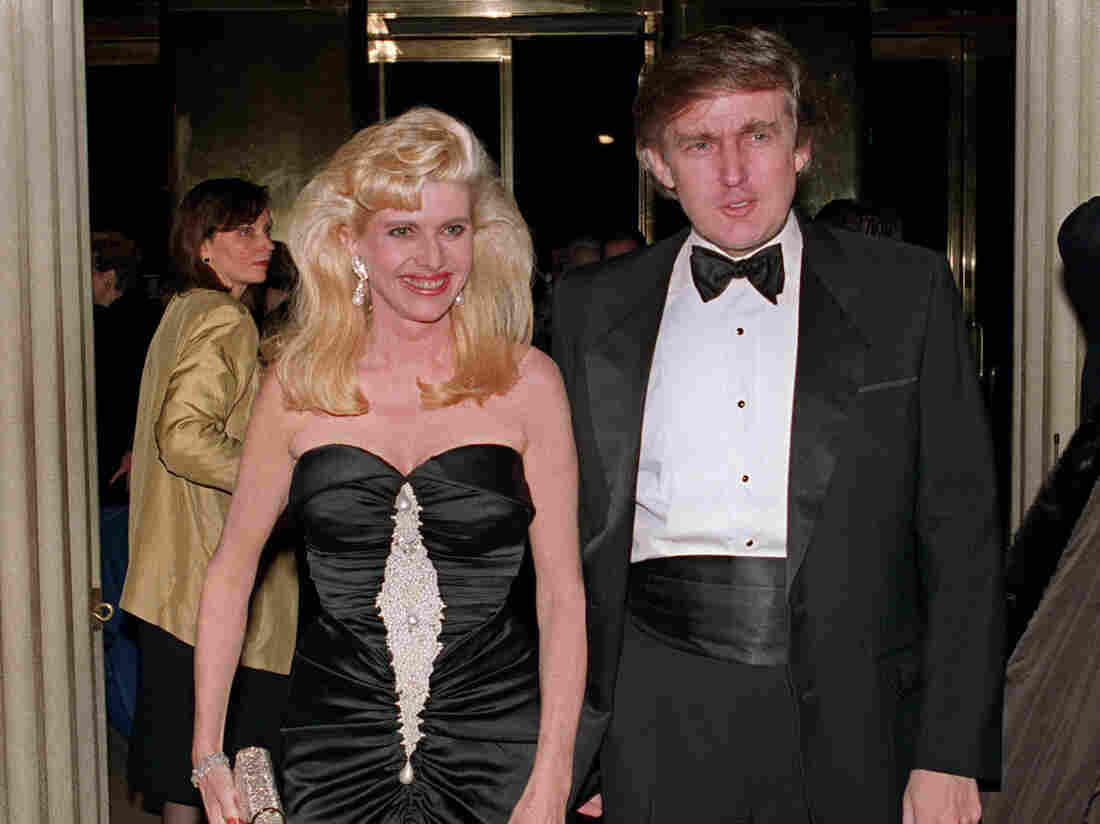 Trump and his then-wife, Ivana, at a social engagement in New York in 1989. SWERZEY/AFP/Getty Images hide caption 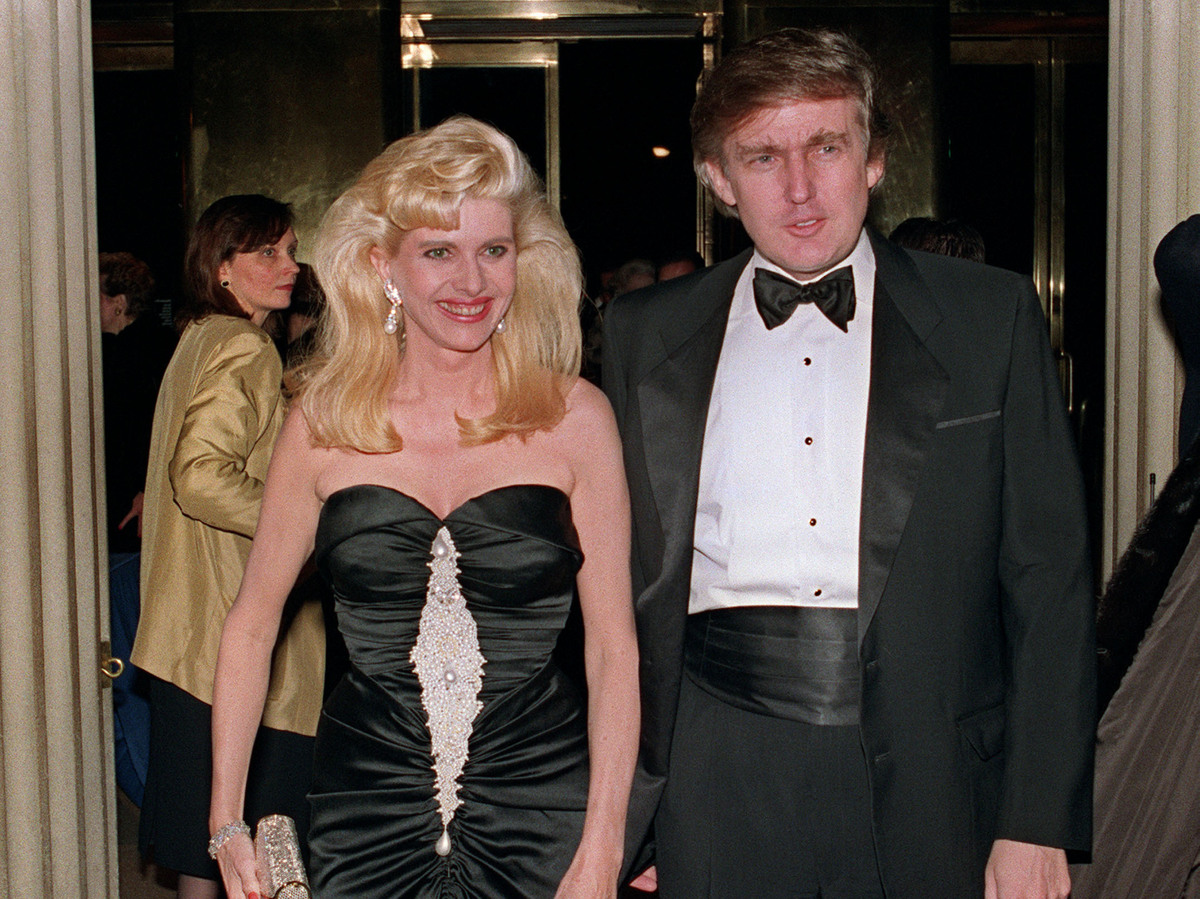 Trump and his then-wife, Ivana, at a social engagement in New York in 1989.

5. He has been married three times and has five children

The three children from his first marriage — Donald Jr., Ivanka and Eric — are now in their 30s and involved in the Trump Organization businesses. Their parents, Donald Sr. and Ivana, were married from 1977 to 1991 but appeared in Pizza Hut ads together after their separation — joking about how they would split up the pie.