Accessibility links
The Problem With Donald Trump's One-Page Summary On His Wealth : It's All Politics Donald Trump held up a one-page summary of his wealth that he claimed showed he's worth almost $9 billion. But the public essentially has to take his word for it until more details are disclosed. 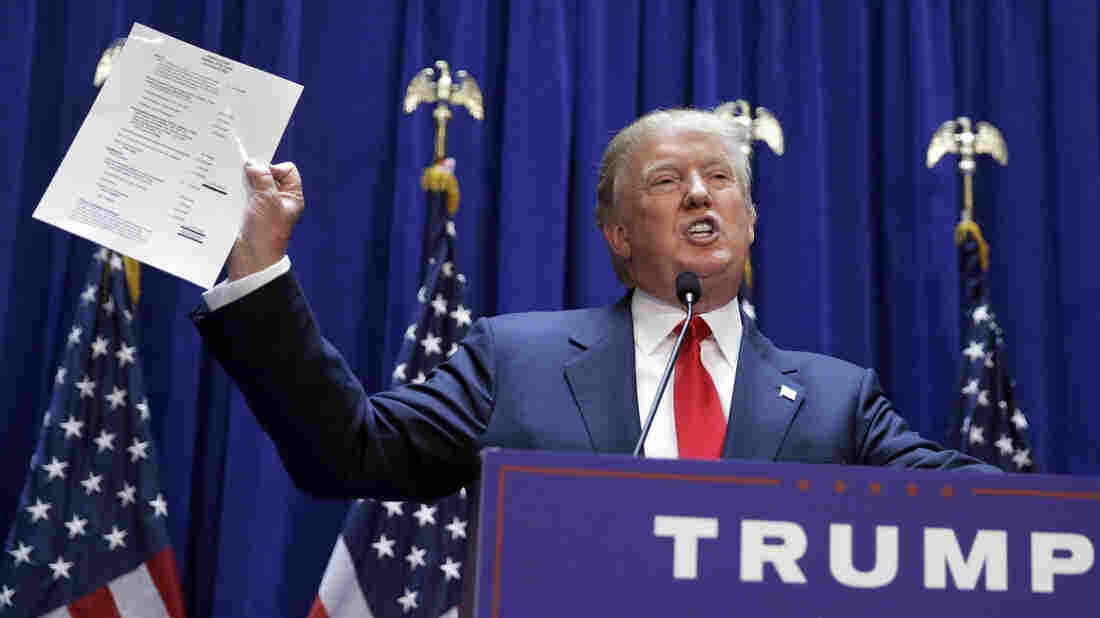 Donald Trump displays a copy of a summary of his net worth during his presidential announcement Tuesday. Richard Drew/AP hide caption 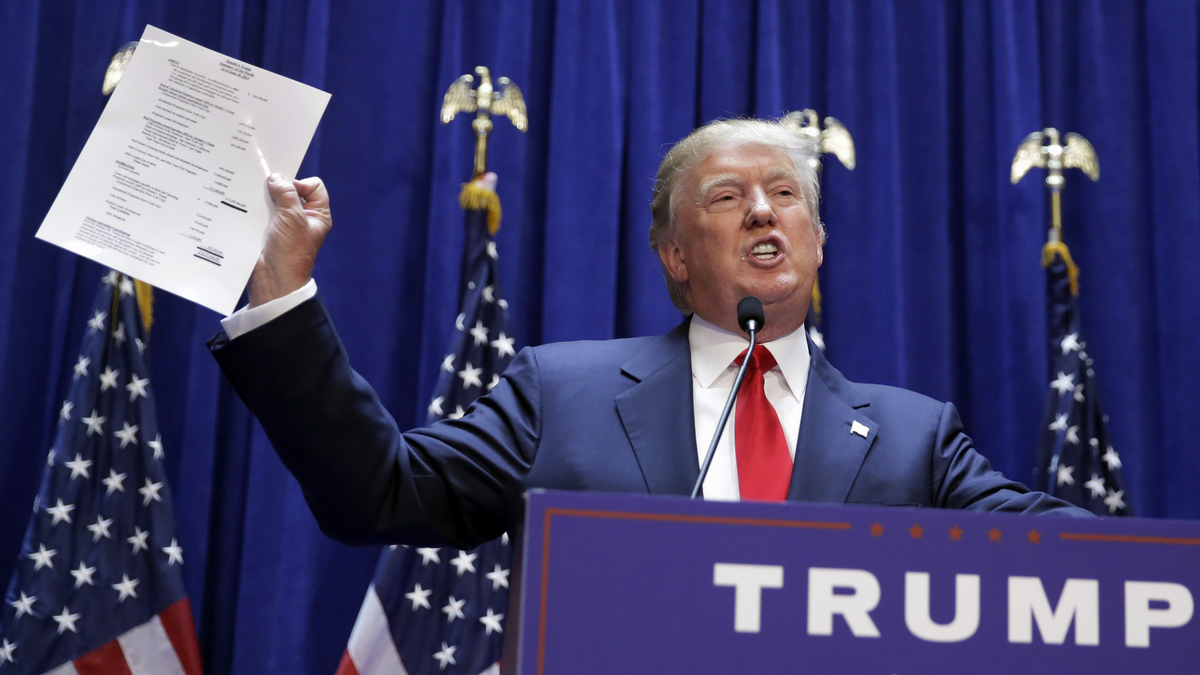 Donald Trump displays a copy of a summary of his net worth during his presidential announcement Tuesday.

Just how much is Donald Trump worth?

"I'm really rich," Trump declared during his presidential announcement Tuesday in New York at Trump Tower, one of the many buildings around the world donning his name.

But just how rich has always been a question. It was one before the real-estate mogul declared for president and, well, it remains a big question afterward, too, despite Trump holding up a one-page form declaring he is worth roughly $9 billion.

Trump has never liked to get specific about his wealth, but presidents and presidential candidates have no choice. Federal ethics law requires them to file annual disclosure reports, including a financial disclosure form 30 days after officially announcing.

"A lot of pundits on television said he'll never run," Trump boasted. "He's too private, and he's probably not as successful as everybody thinks."

And with that, he brandished his answer: a one-page "Summary of Net Worth," which he said was produced­ by his accountants and a "big accounting firm, one of the most highly respected."

The summary puts Trump's assets at $9.24 billion and his liabilities at just $503 million, giving him a net worth of just over $8.7 billion.

That's more than double an estimate from the Forbes list of billionaires, which pegged it at $4.1 billion. But, particularly at this level of personal wealth, the numbers released hardly tell the whole story. The one-page summary makes it difficult to unravel how the math is calculated. Specific buildings, real estate and holdings are not itemized, like they are required to be in a more detailed candidate financial disclosure.

The properties Trump owns can be assessed at book value — roughly speaking, the initial cost minus depreciation — or they can be assessed at fair-market value. The real-estate market can be volatile, and sometimes there are big gaps, especially if the real estate is Trump Tower and the Grand Hyatt hotel in midtown Manhattan.

Trump appears to be leaving millions of dollars on the table, a real-estate investment adviser said, by paying off his mortgage debt rather than using low-interest loans to leverage the real estate for reinvestment.

Another questioned whether the real-estate values might be overstated. Both advisers asked to speak on the condition on anonymity.

"There's not enough information to really understand it," said Frederick Chinn, an advisor at the Atalon Group in Henderson, Nev. "There are a lot of questions I would have just looking at the statement."

Then there's the value of the Trump brand. Trump's statement judges his "real estate licensing deals, brand and branded developments" to be worth $3.3 billion.

But to Forbes, the brand is worth less than $300 million, said Anand Chokkavelu, managing editor of the Motley Fool investing website Fool.com.

"I side with Forbes," Chokkavelu said. "I don't see any reason to take his self-reported net worth at face value."

Trump has a July 16 deadline for filing the official disclosure. He said he would do it on time.

"Everything will be filed eventually with the government," Trump declared at his announcement, "and we don't [need] extensions or anything. We'll be filing it right on time. We don't need anything."

There are legal liabilities for misreporting. Although the feds can grant deadline extensions, Fox News might not. It has a Republican debate scheduled Aug. 6, and candidates must file if they want to participate.

But even when a candidate files a more detailed disclosure, accuracy is hard to nearly impossible to enforce, watchdogs warn. Newt Gingrich in 2011, for example, filed a disclosure that did not list his paid speeches or television analyst contract. They were lumped in with income from Gingrich Productions, obscuring the details.

"Once you throw your hat in that ring, there's a bunch of laws that are supposed to apply to you, not all of them are enforced with the same level of rigor," Bill Allison, a senior fellow at the Sunlight Foundation, told NPR's Joel Rose. "And the financial disclosure is one of those areas where candidates have a lot of leeway to fudge the numbers."