Accessibility links
Republicans Don't Have A Plan Yet To Replace Obamacare Subsidies : It's All Politics If the Supreme Court finds health care subsidies unconstitutional, conservatives will boast a win over Obamacare. But Republicans face a challenge — many of their constituents are getting subsidies.

Republicans Don't Have A Plan Yet To Replace Obamacare Subsidies

Republicans Don't Have A Plan Yet To Replace Obamacare Subsidies 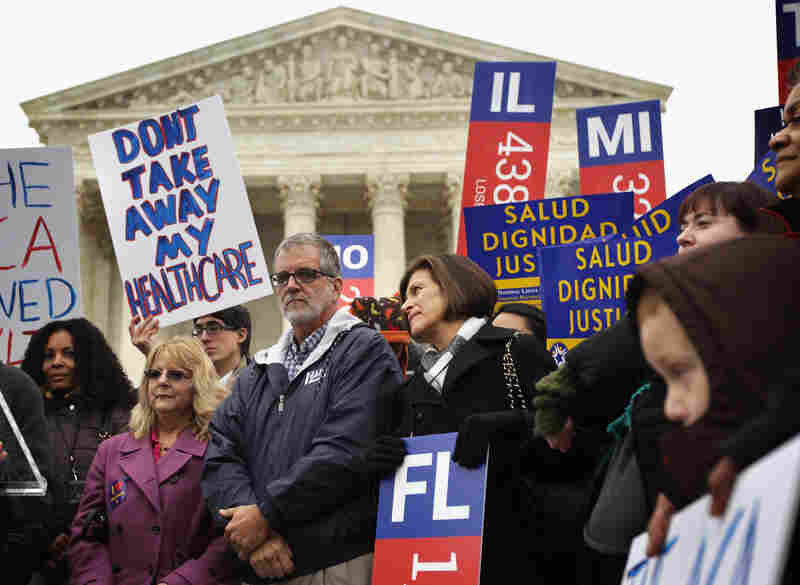 Supporters of the Affordable Care Act rally in front of the U.S. Supreme Court in Washington, D.C., on March 4. The Supreme Court is considering the case of King v. Burwell, which could determine the fate of health care subsidies for millions of people. Alex Wong/Getty Images hide caption 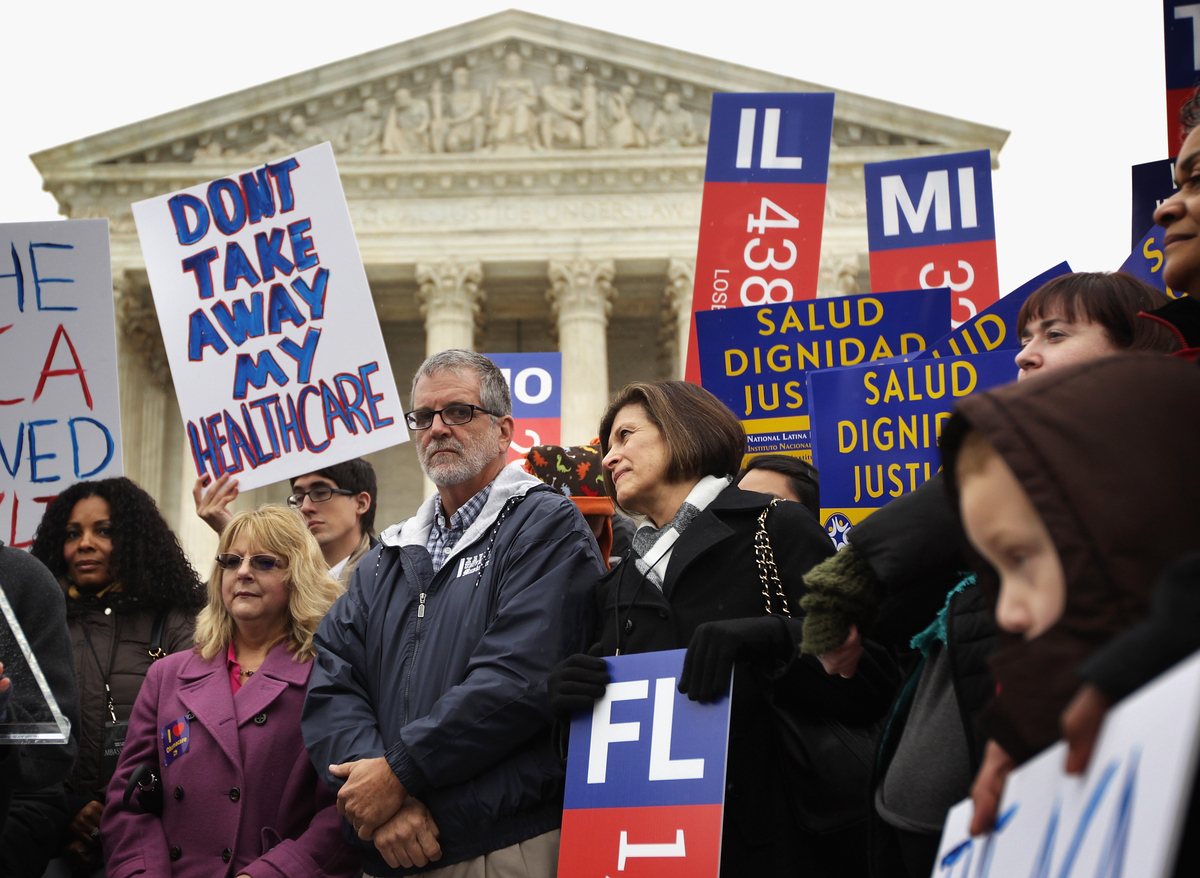 Supporters of the Affordable Care Act rally in front of the U.S. Supreme Court in Washington, D.C., on March 4. The Supreme Court is considering the case of King v. Burwell, which could determine the fate of health care subsidies for millions of people.

As the Supreme Court edges closer to issuing an opinion that could deal a blow to the federal health exchange operating in more than 30 states, Democrats have sounded a warning to their colleagues on the other side: Be careful what you wish for.

If GOP lawmakers get the court decision they've been hoping for, it will be up to the Republican-controlled Congress to figure a way out of the mess. After more than 50 votes in the House to repeal either all or parts of the Affordable Care Act, Republicans have yet to unveil a proposal on how to replace the health care law. And they also haven't united around a stopgap plan that would bridge an adverse ruling by the court with the health care policies of the next president.

Republicans in both chambers have been working for months on proposals, but, so far, House Speaker John Boehner and Senate Majority Leader Mitch McConnell — and their respective caucuses — haven't coalesced around a single path forward for the 6.4 million people, who would lose their subsidies should the court rule against the Obama administration in King v. Burwell.

Sen. Ron Johnson, R-Wis., is pushing a plan that would extend subsidies for people currently enrolled in the federal exchange through August 2017. But it would also end the individual mandate and employer mandate.

The bill has 31 co-sponsors, including McConnell.

"I think we are coalescing around the fact that we don't want to see any additional American harmed by Obamacare," Johnson said. "So what we're willing to do, if the Supreme Court rules in the favor of King, is basically fix that mess — the mess created by a sloppily written law, ruled unlawfully implemented."

But Johnson said his colleagues are asking for a few tweaks to his bill, including pushing back the date by which subsidies end. Because insurance policies run annually, Johnson said, some senators think it would be easier to have the subsidies run through December 2017.

"We're going to give everybody breathing space," said Johnson.

Sen. Ben Sasse, R-Neb., is also pushing a bill that would force the subsidies to expire after a year and a half. Meanwhile, Louisiana Republican Bill Cassidy has introduced legislation that would replace the subsidies with grants to states, which could be used to set up individual health savings accounts for patients.

So far, Senate Majority Leader Mitch McConnell has not pressured his caucus to unite behind one specific proposal.

On the House side, Republican leadership has been coy about its plans in case King v. Burwell goes their way.

"Clearly we're interested in protecting those millions of Americans who could lose their subsidies," Boehner said at a press conference last Thursday. "But we are not interested in protecting a fundamentally broken law. And we're doing everything we can to increase choices for Americans, lower cost and increase the quality of the healthcare they get — which is all being undermined by Obamacare."

A trio of powerful House committee chairs is coordinating with leadership to craft a proposal, but no details have been released. Part of that could be because publicizing any plan now would shine a light on deep divisions in the party on how to move forward.

Many conservative Republicans insist any plan that temporarily preserves subsidies for millions of Americans is tantamount to extending Obamacare.

"I think, politically, the worst move of all for Republicans is to help extend Obamacare and save it," House Republican Tim Huelskamp of Kansas said. "If we squander this opportunity, I think we squander the whole reason for our majority."

Huelskamp wants a full repeal of the Affordable Care Act and a full replacement. He says he's currently working on such a proposal with other members from the House Freedom Caucus, a conservative wing of House Republicans.

When asked if he knew many other members who'd support this path, he laughed.

"Hmmm. I don't know," Huelskamp said. "Depends who has a primary opponent."

Rep. Raul Labrador, R-Idaho, said Republicans shouldn't lose sight of the fact that his party's promise to repeal Obamacare has helped them win elections. If millions of Americans lose subsidies after the Supreme Court decision, Labrador argued, only Democrats are to blame.

"If anybody loses their subsidies, it's going to be because the president and his party decided to write the law in a way that was wrong," Labrador said. "The American people understand that this is the president's law and that whatever bad comes from it, it is his issue and his party's issue."

Meanwhile, Democrats have tried to stay out of the fray, remaining careful not to assume an adverse Court ruling.

The Supreme Court case focuses on a piece of the health care law that says subsidies should go to the insurance customers "through an exchange established by the state." Many Democrats want to offer a one-sentence amendment to the Affordable Care Act that would explicitly clarify the federal subsidies are available to people participating in the federal exchange, too.

"The obvious option is to sit down like grown-ups and fix the problem with one sentence, which we can do," Sen. Dick Durbin, D-Ill., said. "Or we can find ourselves languishing in the future of the Affordable Care Act, and millions of Americans may lose their coverage."