Accessibility links
This Quirky New Hampshire Law Might Keep Bernie Sanders Off The Ballot : It's All Politics Since the Vermont independent isn't a registered Democrat — and has never run as a Democrat before — there are questions as to whether he can run in the state where his poll numbers are surging. 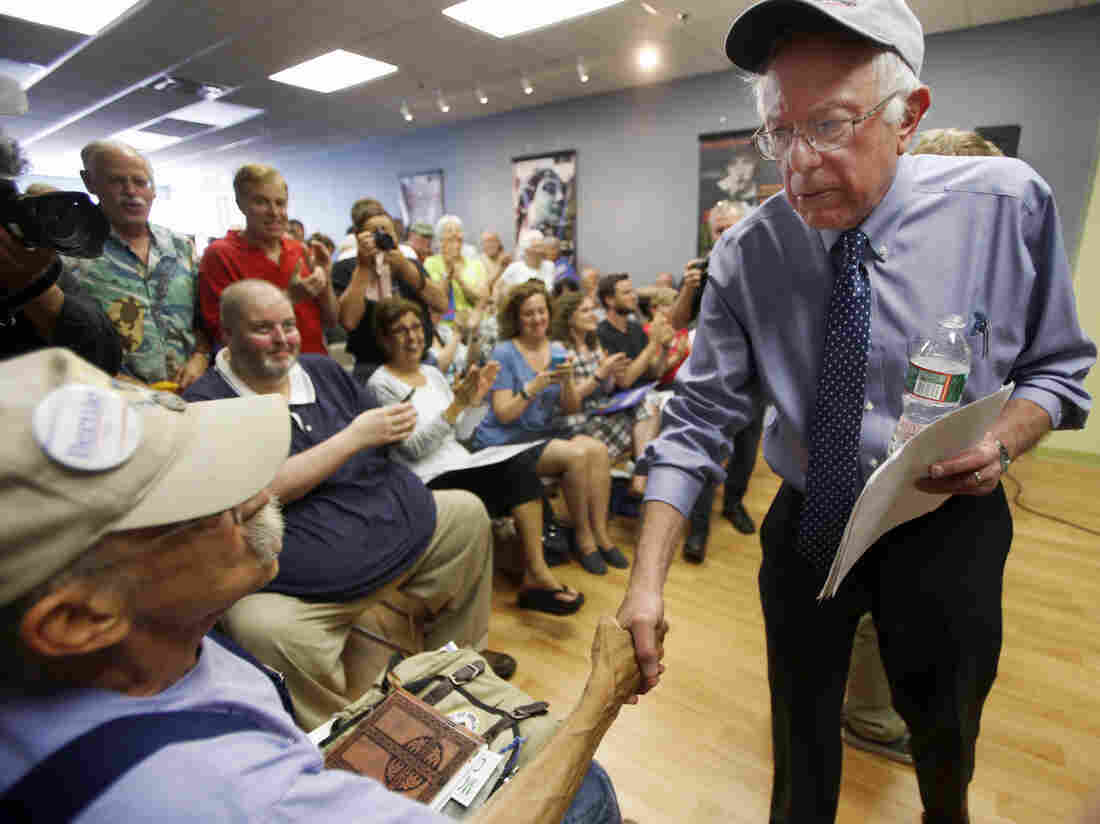 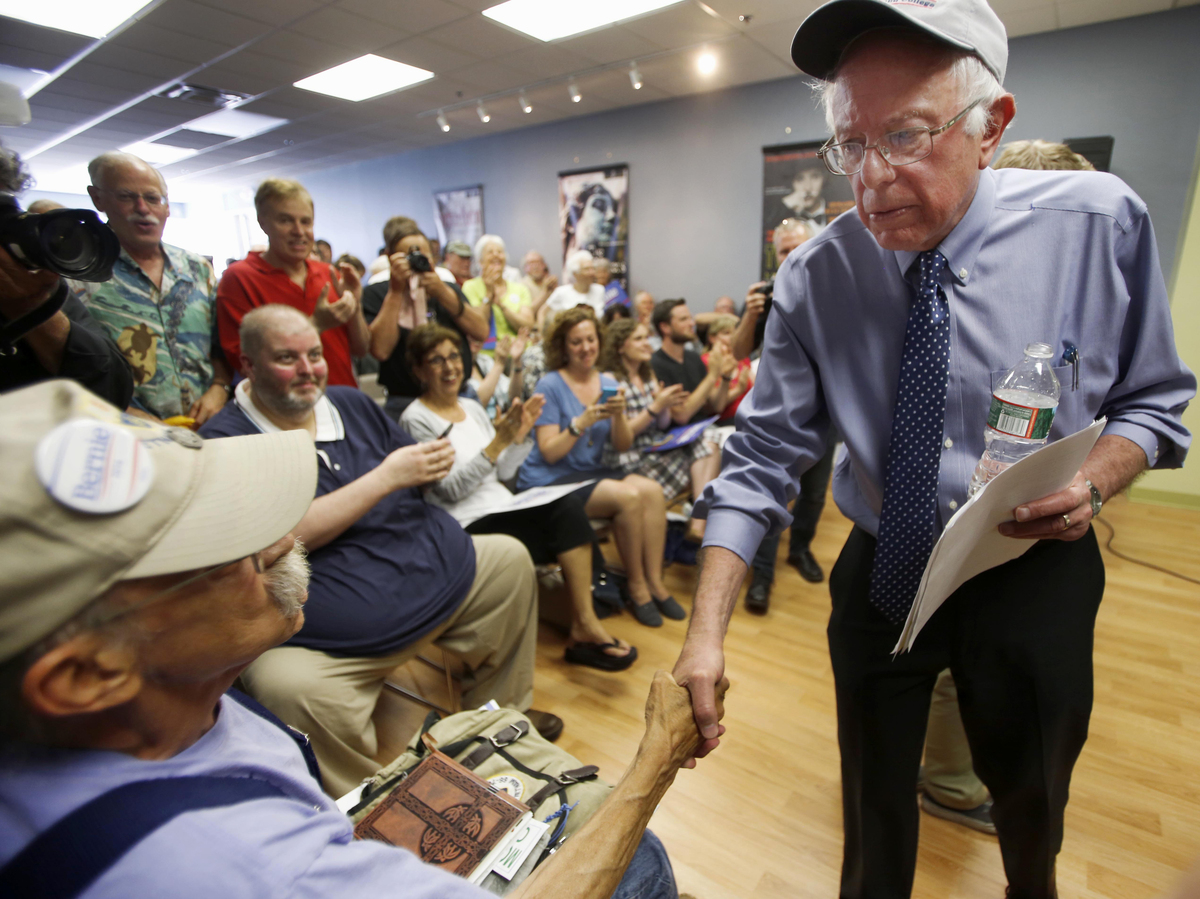 Presidential hopeful Bernie Sanders is on the rise in New Hampshire. But that might not matter if the independent senator from Vermont can't get on the Democratic ballot in the first-in-the-nation primary state.

Due to a quirky New Hampshire filing process — and Sanders' status as an independent rather than a registered Democrat — there are lingering questions about how easy it will be for him to file for the primary next year.

State law says that presidential candidates must be a registered member of the party whose primary ballot they are trying to get on. In fact, the Declaration of Candidacy they must fill out is fairly straightforward (emphasis added):

I, ____, swear under penalties of perjury that I am qualified to be a candidate for president of the United States pursuant to article II, section 1, clause 4 of the United States Constitution, which states, "No person except a natural born citizen, or a citizen of the United States, at the time of the adoption of this Constitution, shall be eligible to the office of President; neither shall any person be eligible to that office who shall not have attained to the age of thirty-five years, and been fourteen years a resident within the United States." I further declare that I am domiciled in _____, in the city (or town or unincorporated place) of _____, county of ____, state of ____, that I am a registered member of the _____ party; that I am a candidate for the nomination for the office of president to be made at the primary election to be held on the ____ day of _____; and I hereby request that my name be printed on the official primary ballot of said _____ party as a candidate for such nomination.

He did appear on the Democratic primary ballot in Vermont for the Senate in both 2006 and 2012, winning their primary, but he declined the nomination both times so he could run as an independent. Still, the avowed socialist has always caucused with Democrats and is even ranking member of the Senate Budget Committee.

Former Rep. Charlie Bass, R-N.H., says that isn't enough evidence for the Vermont senator to make the cut, especially with his explicit rejection of the Democratic nomination in his state twice. 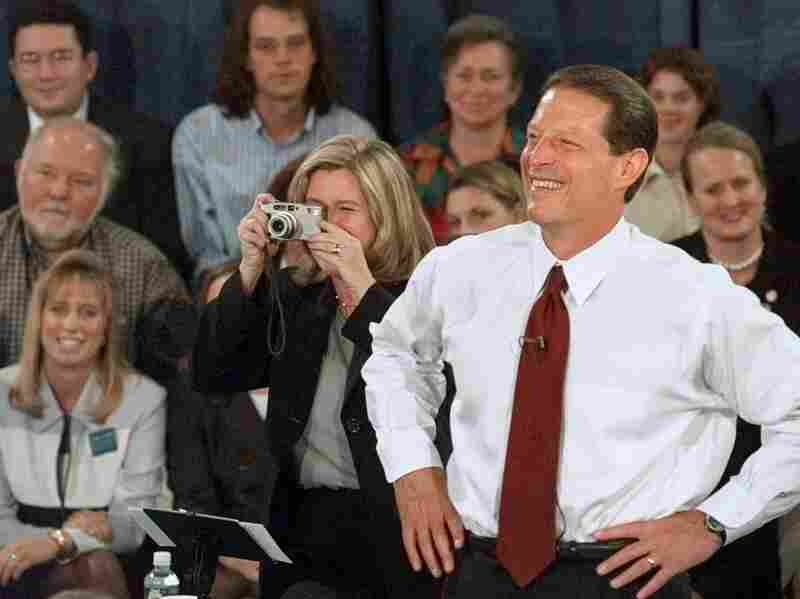 In the 2000 New Hampshire Democratic primary, then-Vice President Al Gore was allowed on the state's ballot because, even though Tennessee does not have party registration, he had been frequently elected as a Democrat. Stephan Savoia/Associated Press hide caption 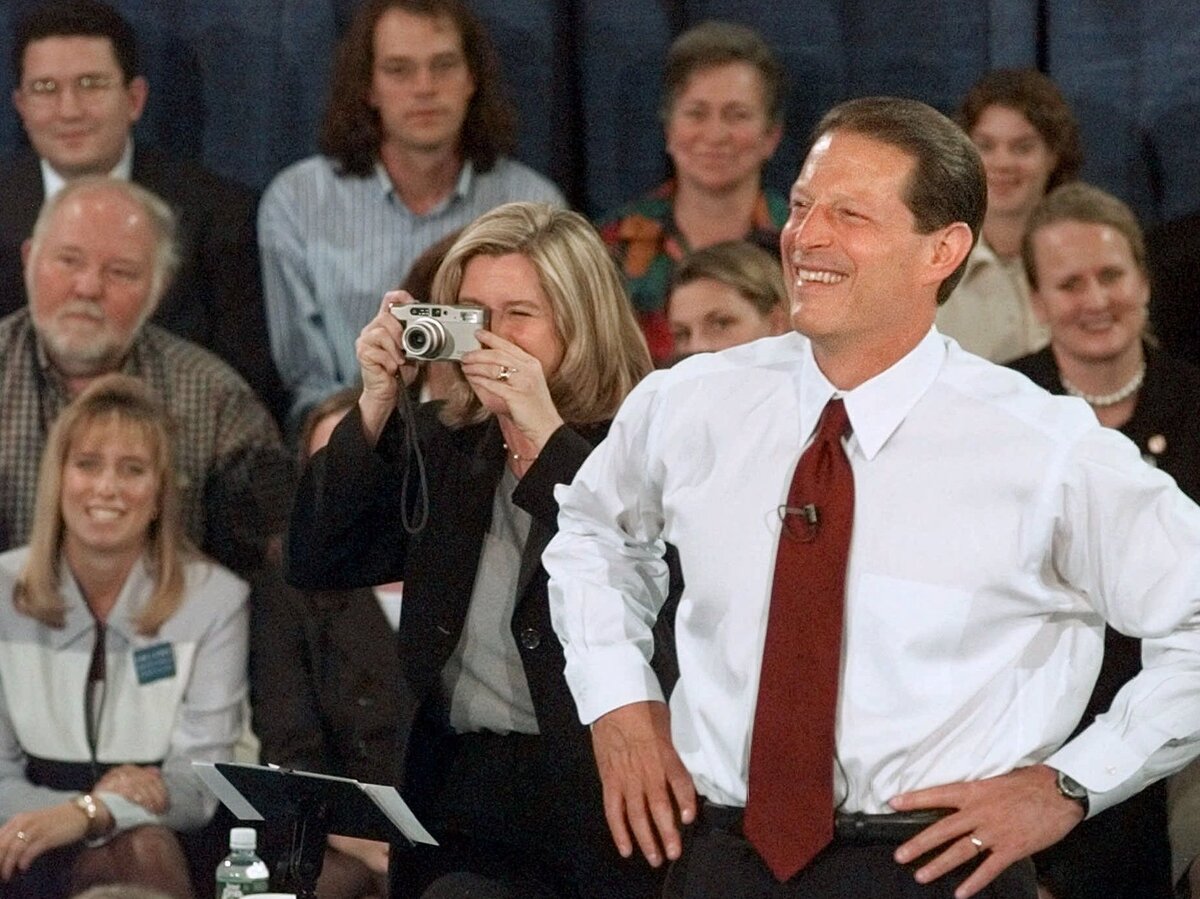 In the 2000 New Hampshire Democratic primary, then-Vice President Al Gore was allowed on the state's ballot because, even though Tennessee does not have party registration, he had been frequently elected as a Democrat.

Even if he wanted to register as a Democrat, he couldn't — Vermont, like 19 other states in the country, doesn't have party registration. Other previous candidates for president who came from states that didn't register by party — such as both George H.W. Bush and George W. Bush from Texas and Al Gore from Tennessee — were able to prove a party history because they had been on ballots and won primaries many times.

But Sanders' candidacy presents the state with a quandary it hasn't faced before — and one that its top elections official isn't even sure about how it will shake out.

"Whenever the question has come up, there was some way to usually show the person has been on the ballot of that party," New Hampshire's long-serving Secretary of State Bill Gardner told NPR. "I really don't know."

Gardner noted that if Sanders does put down Democrat and there are any challenges to the validity of that, or if he is rejected outright, disputes would be heard by the New Hampshire Ballot Law Commission. The five-member committee is made up of three Republicans and two Democrats.

For their part, Sanders' campaign doesn't seem to be worried yet. "We don't think it's going to be an issue," his spokesman, Michael Briggs, told Politico. Briggs did not respond to a request for comment from NPR.

One thing Sanders does have on his side is that both the national and state party have recognized him as a legitimate Democratic candidate for president. 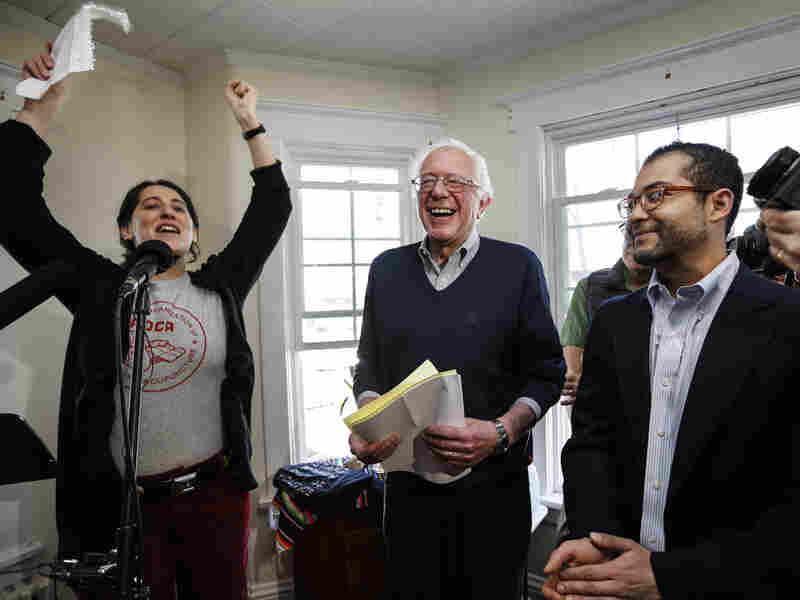 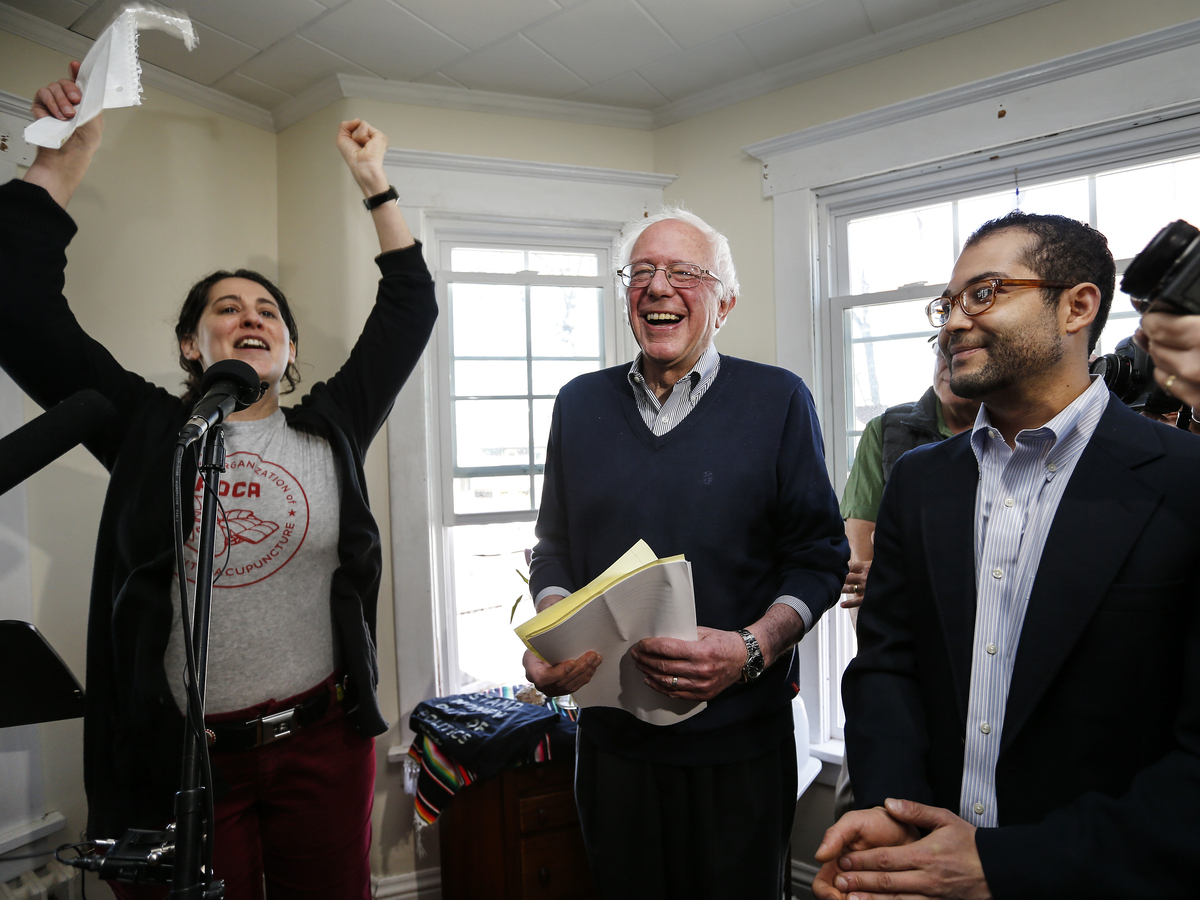 He told NPR he believes "the law is very clear" that its parties determine who is on their party's ballot, and that "we would be the ones, if it were necessary, to take the secretary of state to court" to ensure Sanders is on the ballot.

The quirky law and wording is unique to the Granite State, according to Richard Winger, who publishes the Ballot Access News newsletter.

"New Hampshire just doesn't ever seem to worry that its election laws might be unconstitutional, because they should," said Winger.

He pointed to a 1986 Supreme Court case, Tashjian v. Republican Party, which struck down a Connecticut law that primary voters had to be members of that party after the Connecticut GOP adopted a law allowing independent voters to vote in their primaries. Winger says that case could be used to justify getting Sanders on the ballot, too, since the state party supports his inclusion.

"New Hampshire is the only state dumb enough to say a candidate has to be a registered member of that party," Winger said.