Accessibility links
5 Things You Should Know About Bobby Jindal : It's All Politics The 44-year-old Indian-American governor, who entered the presidential race Wednesday, was once seen as a rising star in the GOP. But presidential hopes are dimming.

5 Things You Should Know About Bobby Jindal

5 Things You Should Know About Bobby Jindal 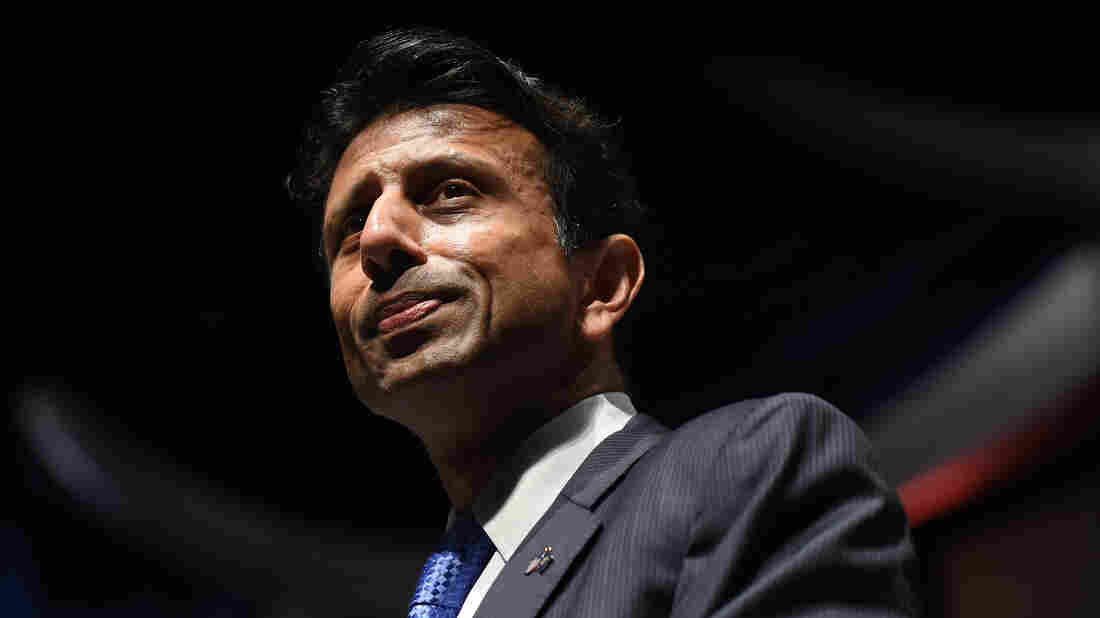 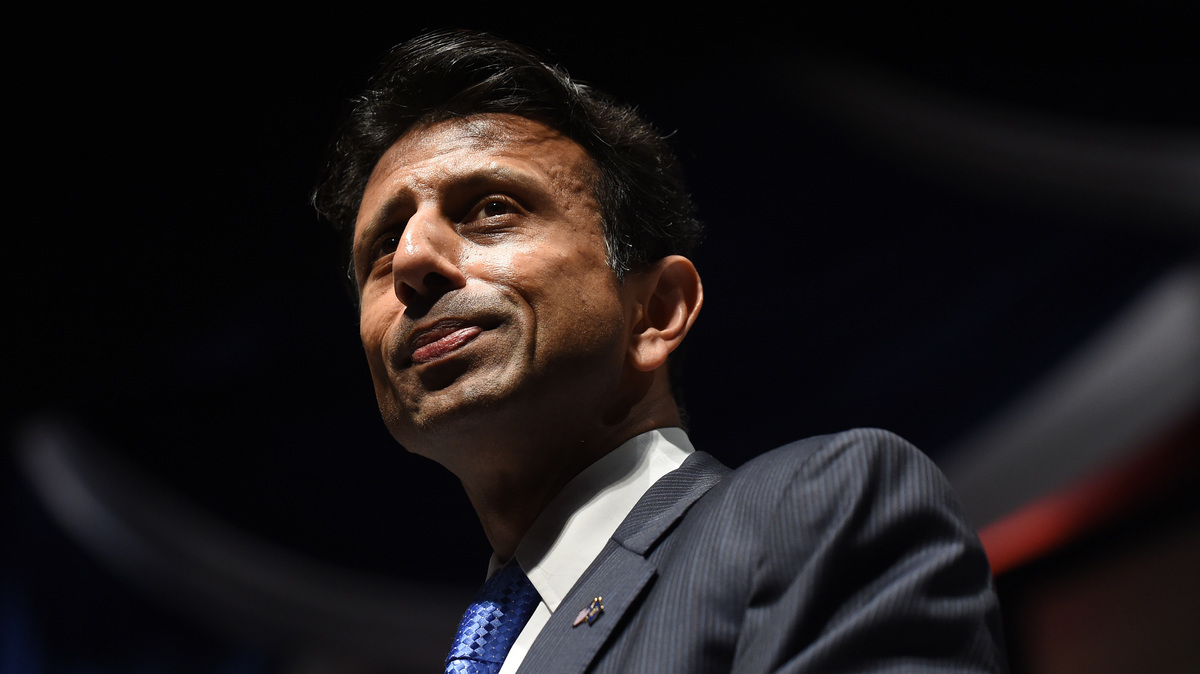 I’m running for President of the United States of America. Join me: http://t.co/MmqB4kxpUq

Once seen as a rising star in the GOP, the 44-year-old Indian-American politician now faces long odds in a crowded primary. He's mired at the bottom of most polls, a situation that threatens to keep him off the main debate stage in the first GOP presidential primary debates in August.

That wasn't always the outlook for the former congressman. Seen as a policy wunderkind, who quickly moved up the ranks from state and federal administrations to lead his state, he was mentioned as a 2012 presidential candidate, but eventually passed on the race. Though his approval ratings in the Bayou State have dropped dramatically amid budget fights, he has still tried to keep a high national profile by hitting the cattle-call circuit to build up his White House chances.

Jindal's best shot at catching fire in 2016 is to appeal to religious conservatives, especially in the early states of Iowa and South Carolina. But that's a crowded space this time around. Though he's a Roman Catholic, he has said he considers himself an "evangelical Catholic." At last week's Faith and Freedom Coalition gathering in Washington, he got a good reception from the crowd as he shared his personal journey to Christianity, and Iowa GOP observers have also said he's gotten positive marks on the trail there, too.

Here are five things to know about Bobby Jindal:

1. Bobby isn't his real name; it's a nickname inspired by The Brady Bunch.

Jindal was born Piyush Jindal in Baton Rouge in 1971 to parents who had emigrated just months earlier from India. When he was 4 years old, he asked to be called Bobby after one of the brothers on the popular family sitcom.

Raised Hindu, Jindal converted to Christianity in high school after a friend shared his faith with him. Jindal would read his Bible with a flashlight in his closet, hiding his conversion from his parents.

"I read the words of Jesus Christ, and I realized that they were true," Jindal said in a 2014 commencement address at Liberty University. "I used to think that I had found God, but I believe it is more accurate to say that He found me."

2. He's a Rhodes scholar — and had a young start in government and public policy.

Jindal graduated at just 20 years old from Brown University with degrees in both biology and public policy. He was admitted to both Harvard Medical School and Yale Law School, but he turned down both to attend Oxford University as a Rhodes scholar.

There, he studied health policy and eventually returned to his native state to serve as secretary of the Louisiana Department of Health and Hospitals — all at the young age of 24. Four years later, at just 28, he was appointed the youngest-ever president of the University of Louisiana system.

In 2001, President George W. Bush appointed him to be assistant secretary for the U.S. Department of Health and Human Services, acting as the chief policy adviser to the director of HHS. 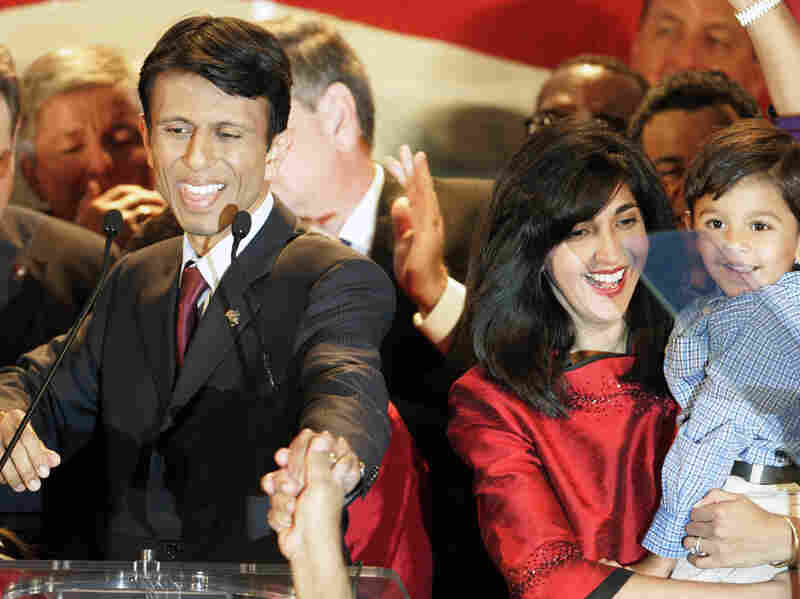 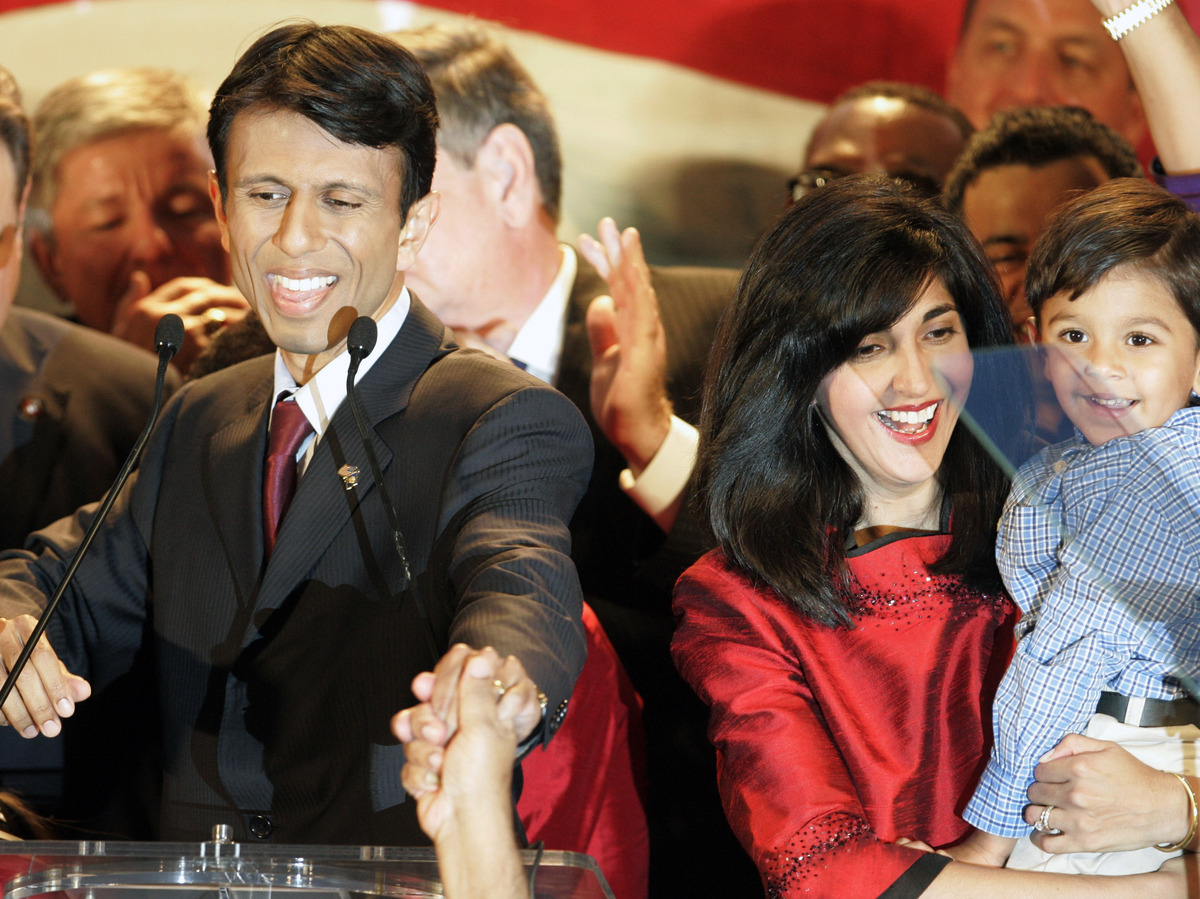 Alongside his wife, Supriya, and son, Shaan Robert, Jindal addresses his gubernatorial victory party in 2007.

3. Jindal lost his first run for elective office, but has won every one since.

Jindal left his role with HHS in 2003 to run for governor. Louisiana has an open primary system in which all candidates are on the ballot regardless of party. In that first vote, Jindal topped the field, easily besting the second-place finisher, Democratic Lt. Gov. Kathleen Blanco. But in that November's runoff election, Blanco narrowly prevailed, despite the fact that Jindal earned some Democratic support, including an endorsement from then-New Orleans Mayor Ray Nagin. Some believed racism was to blame for his close loss.

Jindal went on to be elected to Congress the following year, though, and was re-elected in 2006. Under fire for her handling of the recovery from Hurricane Katrina in 2005, Blanco decided not to run for re-election. Jindal ran again and, this time, he easily beat state Sen. Walter Boasso, who had switched from the GOP just that April to run for governor. In 2011, Jindal won outright without a runoff, winning with more than 65 percent of the vote.

4. One of Jindal's biggest moments instead drew comparison to Kenneth the page.

In 2009, the young Louisiana governor was tapped to deliver the GOP response to newly elected President Obama's first address to a joint session of Congress. The plum post was supposed to launch him onto the national stage and buttress a Republican Party badly in need of diversity.

But Jindal, normally a fast talker, looked halting and timid, as he awkwardly delivered an attempt at a folksy speech. Both Republicans and Democrats panned the address, and many unflatteringly compared him to 30 Rock's bumpkin character, Kenneth the page. 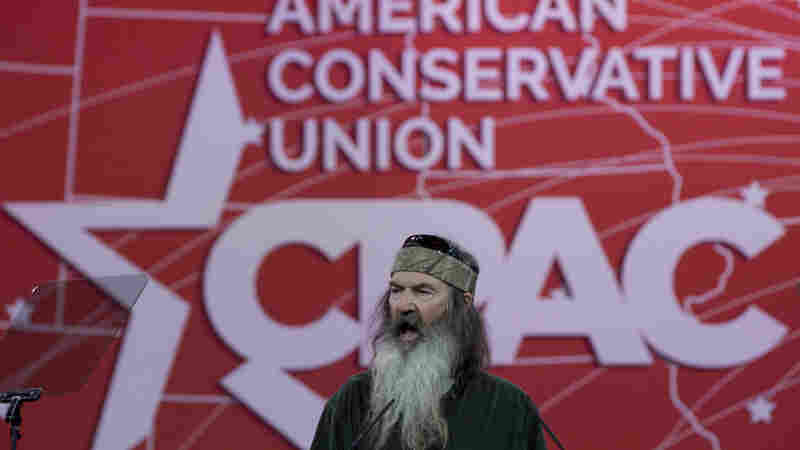 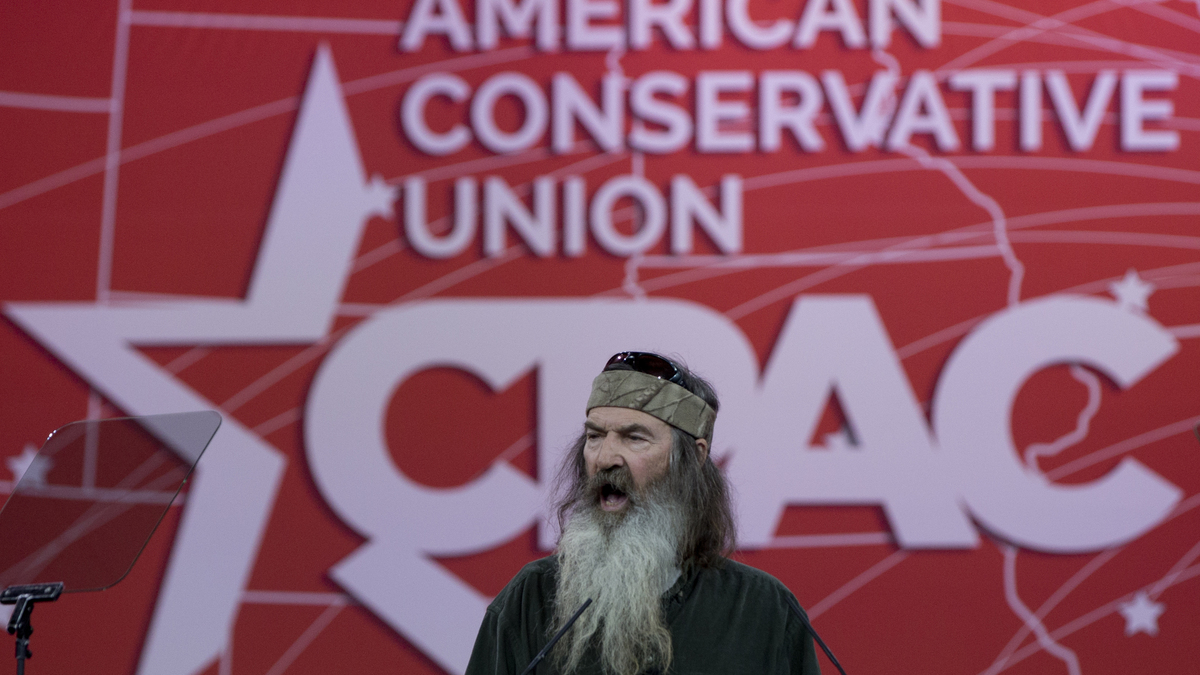 5. He has the Duck Dynasty seal of approval.

One TV comparison Jindal is happy to feed is his relationship with the Robertson family, stars of the popular A&E series Duck Dynasty. The show chronicles the camo-clad, bearded family that runs a booming duck-call business. It is popular among conservatives and those in the Bible Belt; the Robertson family are seen praying each episode and talking openly about their faith.

But Jindal's connection to the show hasn't been without controversy. The family patriarch, Phil, came under fire for comments he made about people who are gay; Jindal, though, stood behind him and criticized Robertson's suspension from the network. When Jindal began to explore a White House run, the Robertson family had his back as well.

"I'm the kind of guy who really likes smart people ... and that guy's one of the smartest people I've ever met in my life," son Willie Robertson said on Fox News earlier this year, throwing his support behind Jindal. "He's young, but he's got the values; he's got the intelligence to do it."

An earlier version of this story said that President George W. Bush appointed Jindal to be assistant secretary for the U.S. Department of Health and Human Services in 2011. The correct year is 2001.