'Abide By The Law': Campaign Trail Responds To Same-Sex-Marriage Ruling

'Abide By The Law': Campaign Trail Responds To Same-Sex-Marriage Ruling 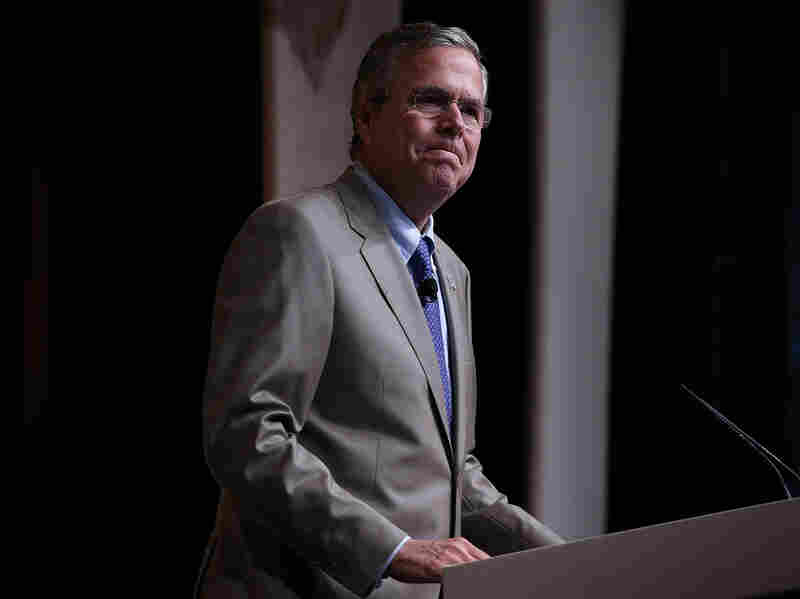 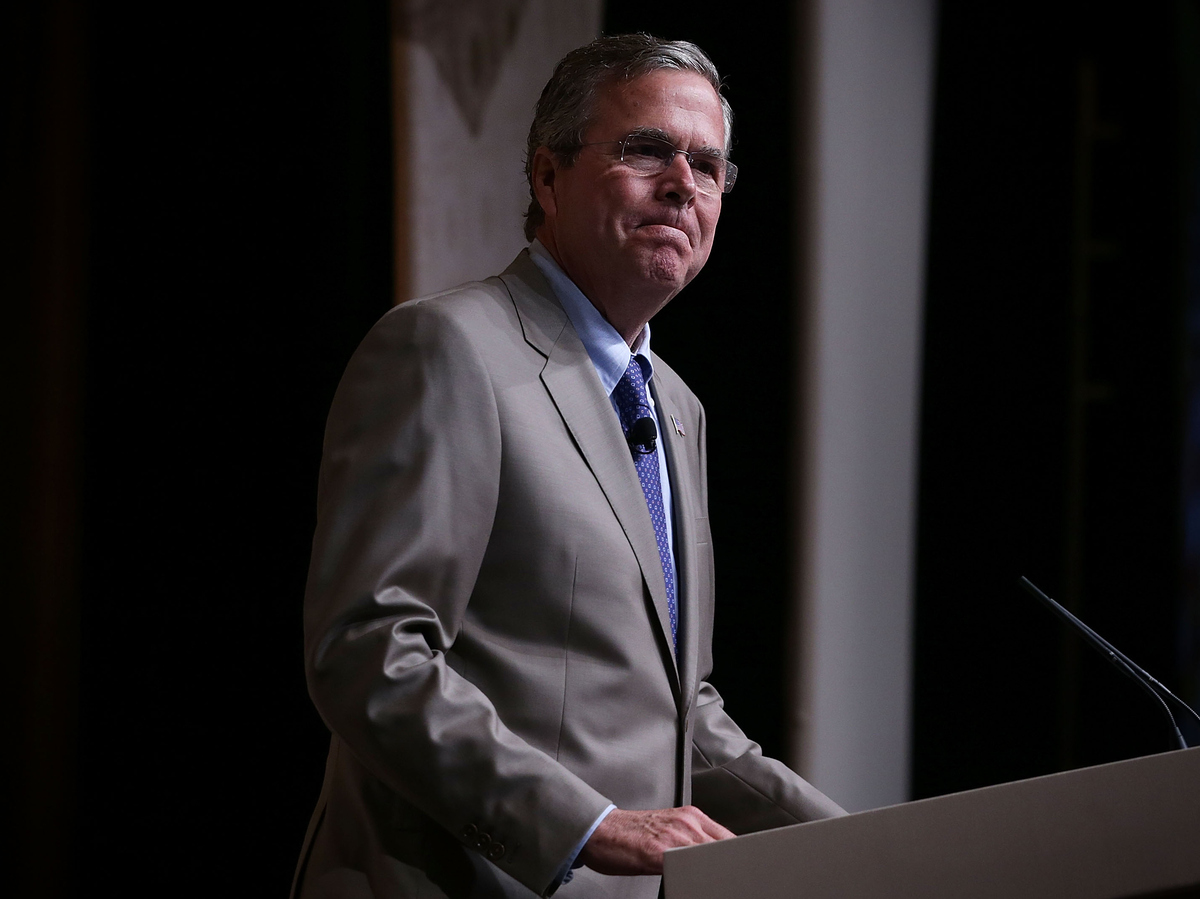 After the Supreme Court's decision effectively legalizing same-sex marriage nationwide came down at 10 a.m. ET, the 2016 hopefuls weighed in quickly.

The Republican side of the field has opposed same-sex marriage, but in responding to Friday's decision, most of the candidates struck a measured tone — many noting they support traditional marriage and religious freedom and disagree with the court — but also stressed the importance of respect and tolerance for all Americans.

Marco Rubio said while he disagrees with the court's decision, "we live in a republic and must abide by the law." Jeb Bush sent a statement saying while he disagrees, "I also believe that we should love our neighbor and respect others, including those making lifetime commitments."

Lindsey Graham said that as president he would "staunchly defend religious liberty" but that "while we have differences, it is time for us to move forward together respectfully and as one people."

For others like Bobby Jindal and Rick Santorum, the tone was not so measured. "This decision will pave the way for an all out assault against the religious freedom rights of Christians," Jindal said.

On the Democratic side, Hillary Clinton, who supports same-sex marriage, tweeted that she was "Proud to celebrate a historic victory for marriage equality — & the courage & determination of LGBT Americans who made it possible." Her campaign quickly changed her "H" logo on social media sites to a rainbow-colored one, and sent out rainbow graphics of the word "History."

Here is how the candidates have responded (with updates as we hear more):

"Guided by my faith, I believe in traditional marriage. I believe the Supreme Court should have allowed the states to make this decision. I also believe that we should love our neighbor and respect others, including those making lifetime commitments. In a country as diverse as ours, good people who have opposing views should be able to live side by side. It is now crucial that as a country we protect religious freedom and the right of conscience and also not discriminate."

"While I strongly disagree with the Supreme Court's decision, their ruling is now the law of the land.

I call on Congress to make sure deeply held religious views are respected and protected. The government must never force Christians to violate their religious beliefs.

I support same sex civil unions but to me, and millions like me, marriage is a religious service not a government form."

"I am a proud defender of traditional marriage and believe the people of each state should have the right to determine their marriage laws. However, the Supreme Court has ruled that state bans on gay marriage are unconstitutional, and I will respect the Court's decision. Furthermore, given the quickly changing tide of public opinion on this issue, I do not believe that an attempt to amend the U.S. Constitution could possibly gain the support of three-fourths of the states or a supermajority in the U.S. Congress. Rather than pursing a divisive effort that would be doomed to fail, I am committing myself to ensuring the protection of religious liberties of all Americans. No person of faith should ever be forced by the federal government to take action that goes against his or her conscience or the tenets of their religion. As president, I would staunchly defend religious liberty in this nation and would devote the necessary federal resources to the protection of all Americans from any effort to hinder the free and full exercise of their rights. While we have differences, it is time for us to move forward together respectfully and as one people."

"Moving forward, however, all of our effort should be focused on protecting the religious liberties and freedom of conscience for those Americans that profoundly disagree with today's decision.

The Court did not and could not end this debate today. Let us continue to show tolerance for those whose opinions and sincerely held beliefs differ from our own. We must lead by example, finding a way to respect one another and to celebrate a culture that protects religious freedom while promoting equality under the law."

"The Supreme Court has spoken with a very divided voice on something only the Supreme Being can do-redefine marriage. I will not acquiesce to an imperial court any more than our Founders acquiesced to an imperial British monarch. We must resist and reject judicial tyranny, not retreat."

The Supreme Court can no more repeal the laws of nature and nature's God on marriage than it can the laws of gravity.

"The Supreme Court decision today conveniently and not surprisingly follows public opinion polls, and tramples on states' rights that were once protected by the 10th Amendment of the Constitution. Marriage between a man and a woman was established by God, and no earthly court can alter that.

This decision will pave the way for an all out assault against the religious freedom rights of Christians who disagree with this decision. This ruling must not be used as pretext by Washington to erode our right to religious liberty.

The government should not force those who have sincerely held religious beliefs about marriage to participate in these ceremonies. That would be a clear violation of America's long held commitment to religious liberty as protected in the First Amendment.

I will never stop fighting for religious liberty and I hope our leaders in D.C. join me."

"While I disagree with this decision, we live in a republic and must abide by the law. ...

I firmly believe the question of same sex marriage is a question of the definition of an institution, not the dignity of a human being. Every American has the right to pursue happiness as they see fit. Not every American has to agree on every issue, but all of us do have to share our country. A large number of Americans will continue to believe in traditional marriage, and a large number of Americans will be pleased with the Court's decision today. In the years ahead, it is my hope that each side will respect the dignity of the other."

"As President, I will be committed to using the bully pulpit of the White House to lead a national discussion on the importance to our economy and our culture of mothers and fathers entering into healthy marriages so that every child is given their birthright- to be raised by their mother and father in a stable, loving home. I will stand for the preservation of religious liberty and conscience, to believe what you are called to believe free from persecution. And I will ensure that the people will have a voice in decisions that impact the rock upon which our civilization is built."

"From Stonewall to the Supreme Court, the courage and determination of the LGBT community has changed hearts and changed laws.

This ruling is an affirmation of the commitment of couples across the country who love one another. ...

So while we celebrate the progress won today, we must stand firm in our conviction to keep moving forward. For too many LGBT Americans who are subjected to discriminatory laws, true equality is still just out of reach. While we celebrate today, our work won't be finished until every American can not only marry, but live, work, pray, learn and raise a family free from discrimination and prejudice. We cannot settle for anything less."

What a day for our country—join me in celebrating today’s decision & thanking the advocates who helped make it happen http://t.co/4JaNmOIgTA

"Today the Supreme Court fulfilled the words engraved upon its building: 'Equal justice under law.' This decision is a victory for same-sex couples across our country as well as all those seeking to live in a nation where every citizen is afforded equal rights. For far too long our justice system has marginalized the gay community and I am very glad the Court has finally caught up to the American people."