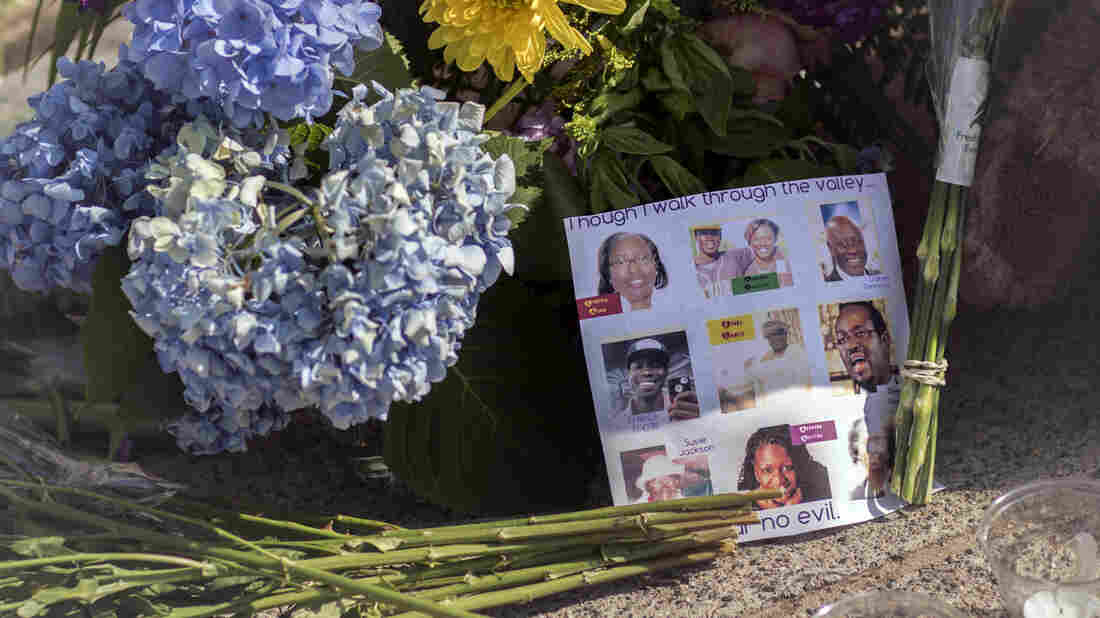 Flowers line the sidewalk in front of the Emanuel AME Church in Charleston, S.C. Stephen B. Morton/AP hide caption 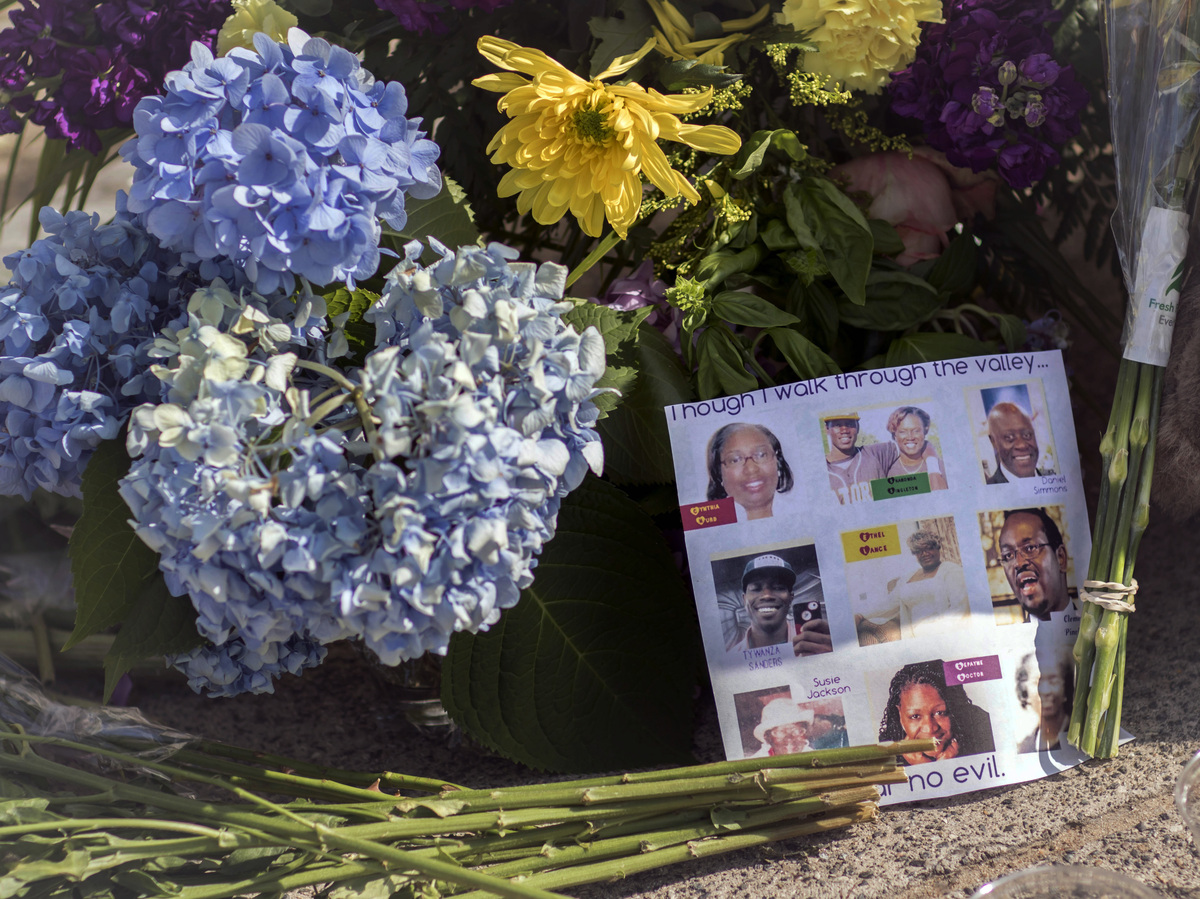 Flowers line the sidewalk in front of the Emanuel AME Church in Charleston, S.C.

Federal officials are investigating last week's Charleston, S.C. church shooting as a hate crime, and the U.S. Justice Department could weigh in in the coming weeks with a federal hate crimes charge.

There are many reported signs that point to alleged shooter Dylann Roof being motivated by hate. The 21-year-old white gunman charged in the murder of nine African-American worshippers at the Emanuel AME Church reportedly said he wanted to start a "race war." A Facebook photo shows him wearing apartheid-era South African and Rhodesian flag patches on his jacket. And a website registered to his address contained a lengthy diatribe against blacks, Jews and Hispanics. 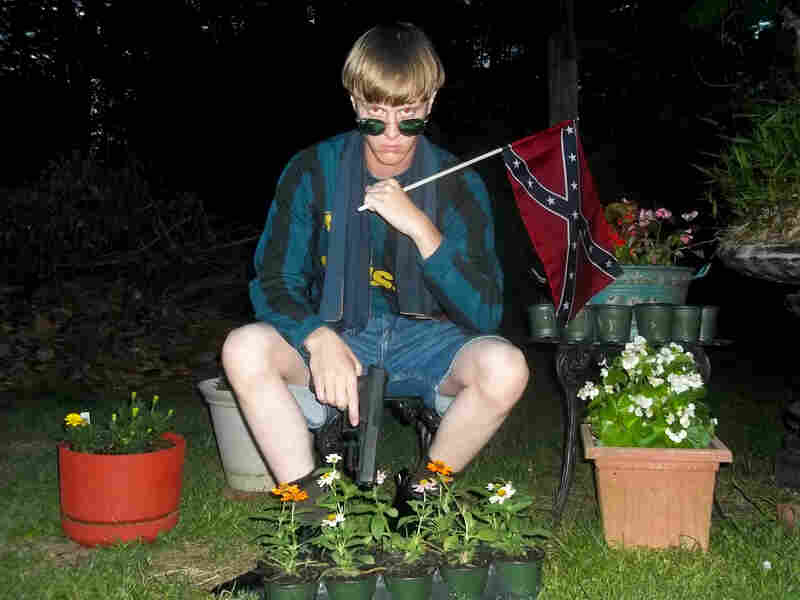 This undated image appeared on a website and is being investigated by the FBI in connection with Charleston, S.C., shooting suspect Dylann Roof. /AP hide caption 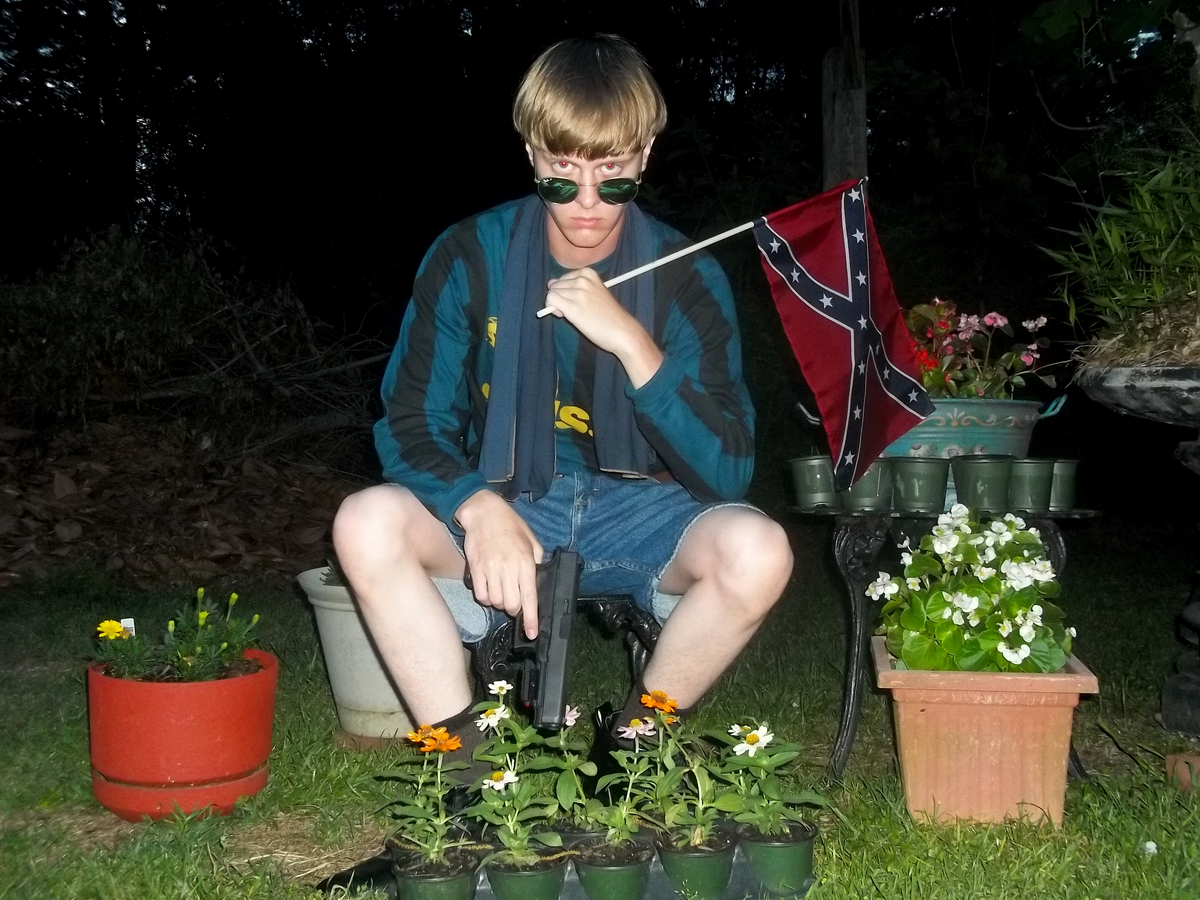 This undated image appeared on a website and is being investigated by the FBI in connection with Charleston, S.C., shooting suspect Dylann Roof.

But the prosecutors in South Carolina won't be able to add hate crime charges, because the state is just one of five without a state hate crime law. State Rep. Wendell Gilliard, who represents the district that includes the Emanuel AME Church, is a co-sponsor of a bill in the South Carolina General Assembly to add additional penalties for committing a crime motivated by bias against a particular group of people.

Roof may face the death penalty, regardless of his motives. But proponents of hate crime laws say the additional punishment is important for criminal justice.

"People understand that this is something different," said Fred Lawrence, an attorney who specializes in hate crimes, and the current president of Brandeis University. "If we were to say to the African-American community of Charleston, 'we're just going to treat this like any murder, we don't think the race of the victims is relevant at all,' I think that would be an enormous affront to that community," he said.

It's rare for federal law enforcement to get involved in hate crime cases, because most cases fall under state law. Lawrence says most hate crime cases involve vandalism, assault, aggravated assault and murder. The feds get involved if they think the state's penalties don't adequately address the crime committed.

In the 45 states with hate crime laws on the books, crimes committed on the basis of something like racial hatred can make a big difference in sentencing. Guidelines vary by state. In many cases they call for enhancing a sentence by adding on additional years, or changing the classification of a crime, such as from misdemeanor to felony.

The Anti-Defamation League has been a big advocate for the laws. The group has pushed for legislation at the state level since 1981, and supported the 2009 law that expanded hate crimes at the federal level to include those motivated by sexual orientation, disability and gender identity.

"If you're going to burn a swastika into the side of a synagogue or burn a cross and demonstrate your hatred that way, if you know that you're going to be doing serious time for that, then you may modify your behavior," said the ADL's Michael Lieberman. He said the fact that 45 states and the District of Columbia have adopted the laws shows most state leaders think stronger punishments make people think twice before acting on any racist or other hateful attitudes.

But trying to measure the deterrent effect of hate crime laws is difficult.

But it's likely a vast undercount; the Bureau of Justice Statistics estimated almost 294,000 hate crimes in the year prior to that, based on victim surveys. The number of hate crimes has fluctuated since 2004, with most recently a sharp spike from 2011 to 2012.

So if the laws are effective, wouldn't the number of incidents be going down each year?

Not necessarily. Proponents say a stronger law means more people may be willing to report hate crimes who wouldn't have before.

"Why would you report that you were the victim of a hate crime unless you thought police were going to do something about it?" Lieberman says. "If [a city] pass[es] a strong hate crime law ... it demonstrates that city is now taking these crimes very seriously," he said.

Still, the laws have their critics, who question the usefulness of combating hate by extending prison sentences.

"I think they essentially come down to feel-good laws," said Michael Bronski, a media studies professor at Harvard who co-wrote "Considering Hate: Violence, Goodness, and Justice in American Culture and Politics."

"I think part of what they do is that they actually misdirect us from looking at much deeper issues," he said. "Racism is a problem, homophobia is a problem, violence against immigrants is a problem ... so we end up passing these laws and saying 'look at this, we're actually doing something.'"

Critics like Bronski think hate crime laws have the effect of bloating prison populations. But figures on sentencing at the national level are hard to come by. The FBI's hate crime data doesn't include how many people are sentenced under these laws.

However, the number of people with enhanced sentencing under hate crime laws is probably pretty small. For example, California reported a total prison population of almost 120,000 in 2013; But in the same year, a state report indicated only 68 people were convicted for hate crimes.

Aside from any deterrent aspect, Lawrence says it's important for victims of hate crimes to know that society recognizes the consequences beyond the crime itself.

"Nobody thinks [Charleston] was a garden-variety murder," he said. "Everybody understands what happened, and it's a deeper tear in the fabric of the society because of what happened."