Accessibility links
One-Third Of Congressional Districts Could Be Affected By Supreme Court Ruling : It's All Politics A Supreme Court ruling expected Monday could dramatically remake the partisan makeup of the next Congress ahead of the 2016 elections. 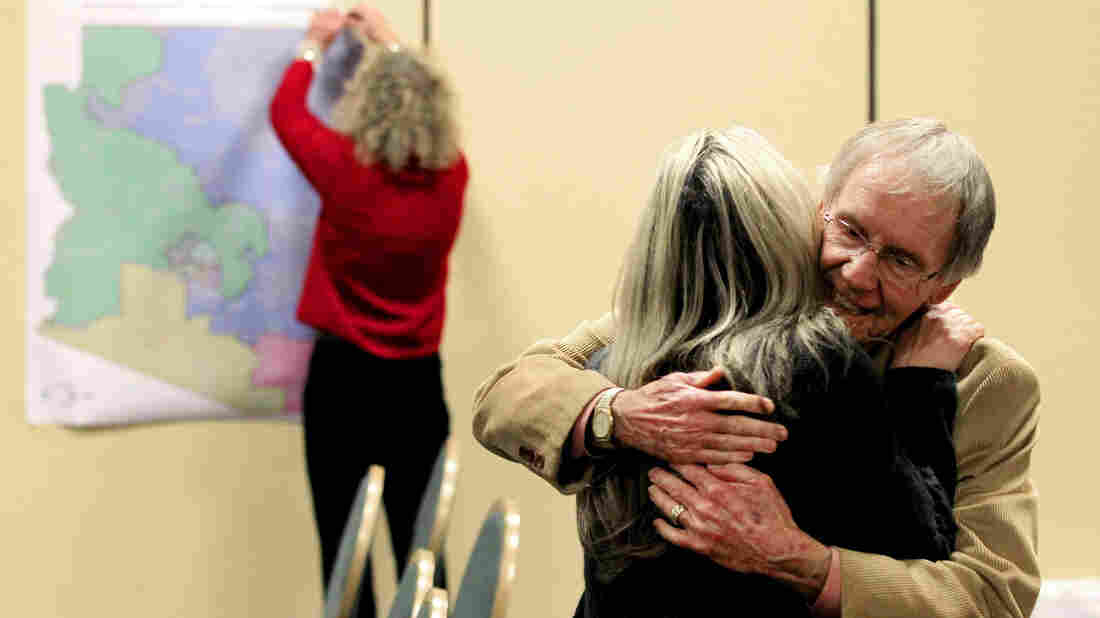 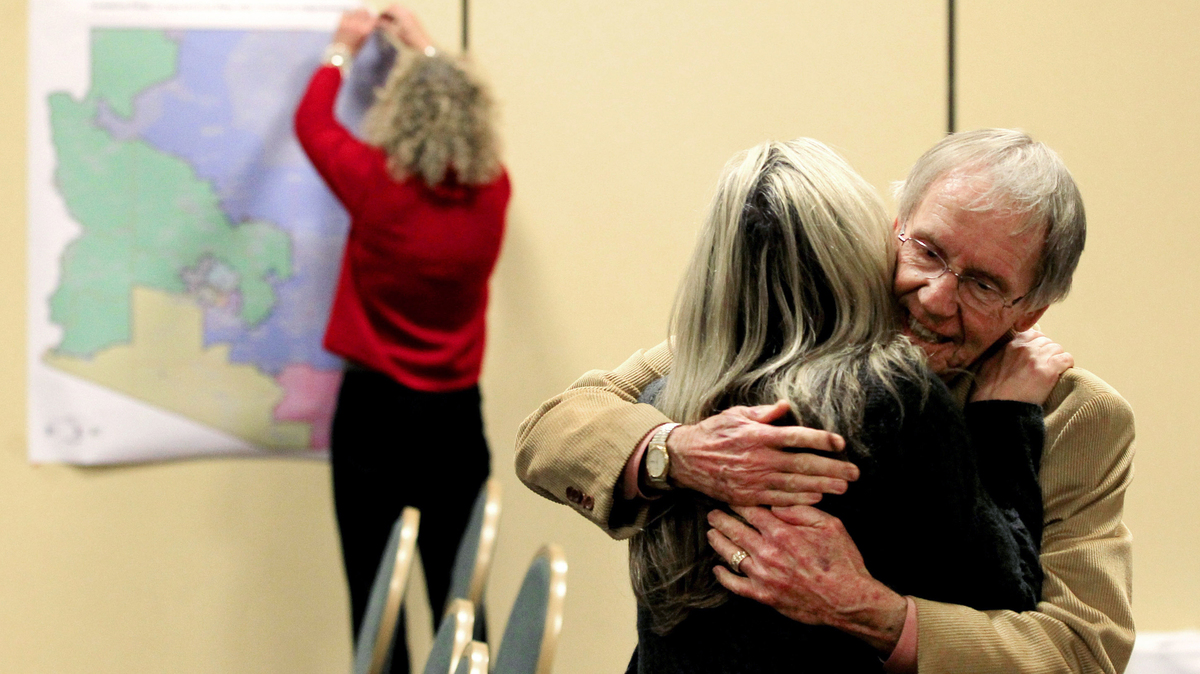 As a staff member takes down the Arizona redistricting map, Arizona Independent Redistricting Commission chair Colleen Mathis gets a hug from Frank Bergen, a Pima County Democrat, at a 2012 meeting.

On the final day of the Supreme Court's term on Monday, they will issue a ruling that could affect as many as one-third of congressional districts — possibly dramatically remaking the partisan makeup of the next Congress ahead of the 2016 elections.

The case at hand, Arizona State Legislature v. Arizona Independent Redistricting, was brought by the Arizona legislature to try to be able to redraw their congressional districts. That task was instead given to an independent redistricting commission after a state referendum passed in 2000 in an effort to try to take political and partisan concerns out of the map-making process.

But because other states also use similar commissions to redraw their congressional lines after each decennial reapportionment, states and districts far beyond the borders of Arizona could be affected.

Here's an explainer on what could happen after the ruling on Monday:

Why is Arizona suing?

In 2011, Arizona was awarded an additional House seat because of population growth in the 2010 census, largely due to the state's Hispanic growth. The state's independent commission — created by a referendum in 2000 that was designed to take politics out of the redistricting process — was tasked with redrawing the new lines. But much to the frustration of the GOP-controlled state legislature, the new nine-seat map included four safe Republican districts, two safe Democratic districts and three swing districts — both currently held by Democrats. 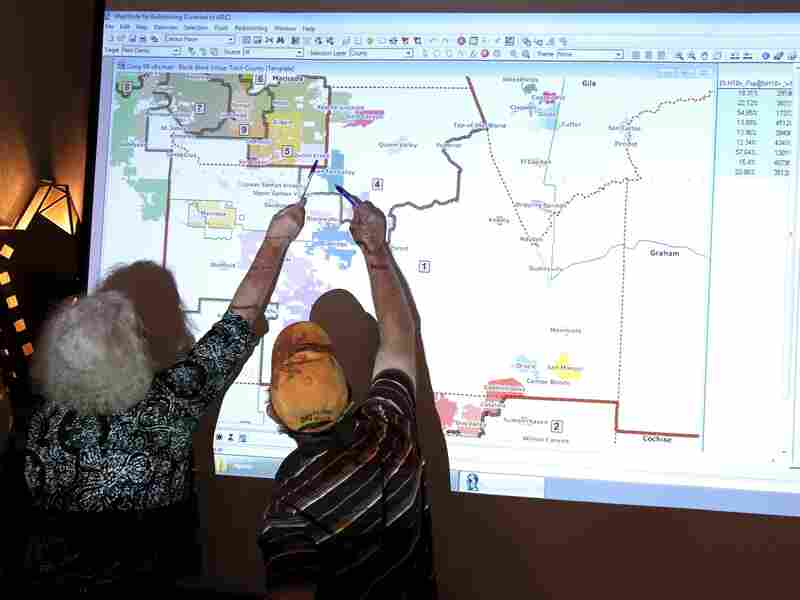 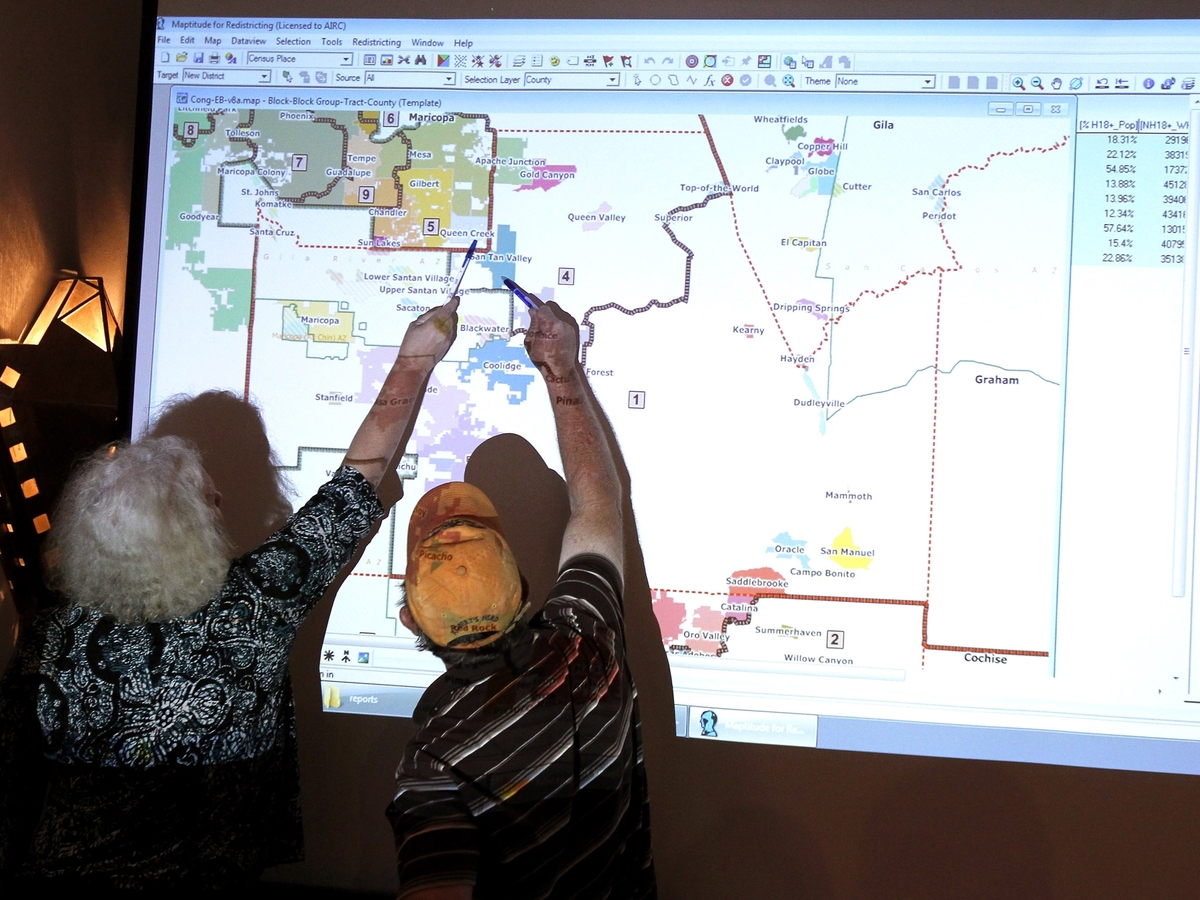 The map GOP lawmakers would have liked to have enacted, according to National Journal, would have given Republicans an additional fifth safe House seat, making Democratic Rep. Kyrsten Sinema's district now a GOP stronghold.

There has long been tension between the legislature and the commission, made up of two Republicans, two Democrats and chaired by an independent. In 2011, when the new district lines were first approved, the legislature and then-Republican Gov. Jan Brewer actually moved to remove the commission's chairwoman, charging she hadn't been transparent and had skewed the resulting lines toward Democrats. The state Supreme Court reinstated her just days later. Now the Supreme Court will decide the legality of the independent commission.

What is the legal argument?

The Elections Clause of the Constitution says that the "times, places and manner of holding elections" for Congress "shall be prescribed in each state by the legislature thereof." The question is whether the legislature referenced there only gives the state legislature the power to draw congressional boundaries, whether they simply need to have some hand in it, or if a legislature could also be interpreted as any voter referendum.

The latter is the point the lawyers for the redistricting commission made earlier this year, to a somewhat skeptical Supreme Court. NPR's Legal Affairs Correspondent Nina Totenberg had the full breakdown of the arguments before the court back in March.

What other states would be affected?

California also adopted an independent redistricting commission thanks to a 2008 statewide referendum. Their commission included 14 members — five Democrats, five Republicans and four members from neither party. According to election law professor Rick Hasen of the University of California-Irvine, who runs ElectionLawBlog.org, further legal action would likely have to be taken for California's to be struck down, too.

That could be the case for other states that have commissions involved in their redistricting process, too. According to the Democratic Legislative Campaign Committee, five states — Hawaii, Montana, Idaho, Washington and New Jersey — legislators appoint at least some of the commission members, but aren't involved in drawing district lines. In Indiana and Connecticut, backup commissions draw maps if the legislature deadlocks on how to redraw lines.

And in Iowa, Maine and New York, commissions submit maps to legislatures for approval, while in Ohio the commission helps the legislature with the lines.

How expansive or narrow the ruling on Monday is could impact some or all of these states as well — up to as many as 152 districts.

Does this mean these districts could become more GOP-leaning or Democratic-leaning?

It's not clear yet. For Arizona, its GOP legislature would likely try to pass through a similar redistricting plan that they had envisioned in 2012 that would have put at least one more seat solidly in their column. In California, however, where Democrats are in power, they could try to use the advantage, if theirs is struck down as well, to draw a friendlier 53-district map for their members. But that might be hard to do with the map essentially already maxed out for Democrats.

If the ruling is more expansive and endangers other states' advisory commissions too, additional legal action could come, too. But for many legal scholars and good-government groups, the biggest fear is that if the court strikes down Arizona's commission, it could be a death blow to hopes of removing politics and gerrymandering from the redistricting process.

"The more important thing," Hasen said, "is that what it would be doing is taking away a tool that tries to deal with the problem of self-interest in redistricting."