Accessibility links
Giving Some Rope: A Brief History Of Tensions Between Politicians And The Press : It's All Politics Hillary Clinton's campaign took the term "wrangling the press" literally when it used a rope to control reporters. She and other candidates have a long history of frustration with the Fourth Estate.

Giving Some Rope: A Brief History Of Tensions Between Politicians And The Press

Giving Some Rope: A Brief History Of Tensions Between Politicians And The Press 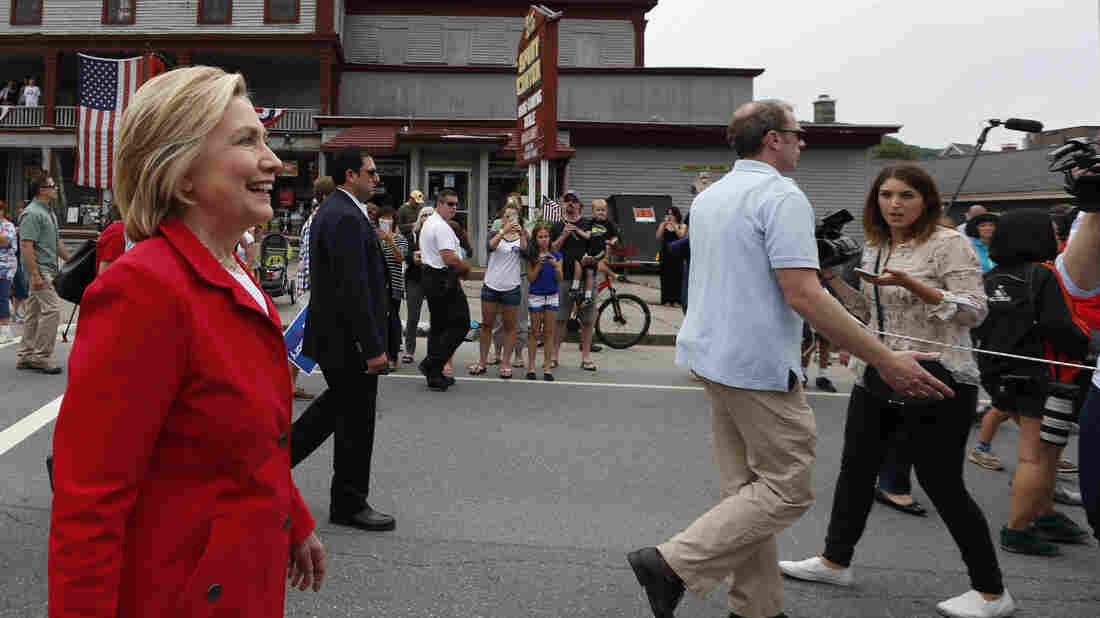 Members of the media are kept behind a moving rope line as Democratic presidential candidate Hillary Clinton marches in a Fourth of July parade in Gorham, N.H. Robert F. Bukaty/AP hide caption 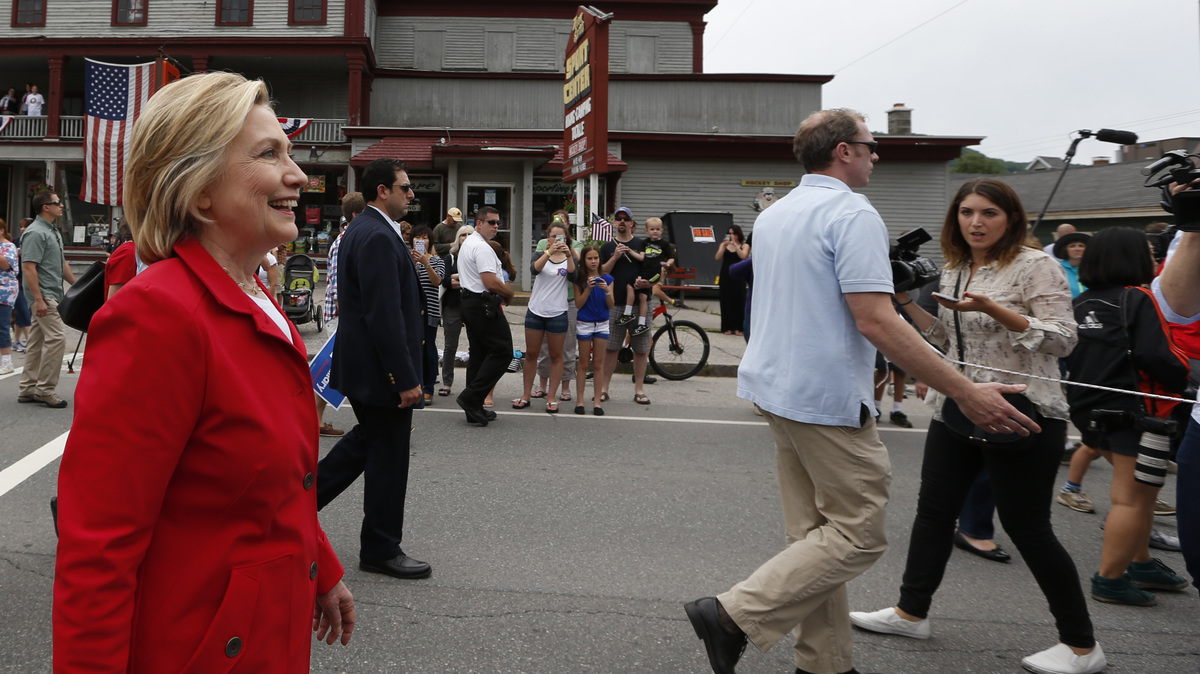 Members of the media are kept behind a moving rope line as Democratic presidential candidate Hillary Clinton marches in a Fourth of July parade in Gorham, N.H.

Hillary Clinton's campaign took the term "wrangling the press" to a whole new level this weekend when it literally used a rope to control reporters covering the Democratic presidential candidate's walk in a New Hampshire Fourth of July parade.

Clinton's campaign defended the decision as necessary to maintain the candidate's ability to interact with voters along the parade route.

"As we've said, we want a happy press corps," Clinton spokesman Nick Merrill told NPR's Tamara Keith in a statement. "We also have to balance that with facilitating our candidate's ability to talk to voters. As to Saturday, we wanted to accommodate the press so they could be right there in the street with the parade. That became too disruptive to the parade, so we asked people to keep a very short distance behind a rope."

Creating that "happy press corps" has been a difficult balance not only for Clinton — who has been frustrated with the media for more than two decades — but also for other candidates over the years. Campaigns have lashed out at reporters they think are covering them unfairly, while reporters have gotten frustrated with lack of access and their questions falling on deaf ears (or politicians simply going around the press).

The trend often continues well into the White House, too. Reporters' frustration early on by lack of access to then-candidate Barack Obama has only grown.

"Politicians and the media are the ultimate hate-love relationship," said Tobe Berkovitz, a professor of political communication at Boston University. "The bottom line is politicians see the media as a semi-necessary evil, and the politicians have, in many cases, now gotten to the point where you can almost avoid dealing with the press" in the age of Twitter, Facebook and YouTube.

But the ease of communicating with the electorate wasn't always that easy. Berkovitz noted that in the 1960s and 1970s, "at that time pretty much the only conduit between a president and the people was mostly television," influential newsweekly magazines and newspapers.

In 1969, the lack of a go-around frustrated then-Vice President Spiro Agnew. In a speech in Des Moines, Iowa, he blasted press coverage of President Nixon's election the previous year and ongoing coverage of the Vietnam War.

Presidents should have the "right to communicate directly with the people who elected him ... without having the President's words and thoughts characterized through the prejudices of hostile critics before they can even be digested," Agnew argued.

And he added something that Hillary Clinton's campaign, well, might agree with: "The views of a — the majority of this fraternity do not — and I repeat, not — represent the views of America."

Here are some recent examples of some of Clinton's famous tiffs with the press, plus how other candidates have also tried to (unsuccessfully) manage the Fourth Estate.

Ever since the Clintons emerged on the national political scene in the early 1990s, there has been a tense relationship with the press. After rumors circulated of Bill Clinton's extramarital affairs, she was one of the biggest supporters of the rapid-response efforts known within the presidential campaign, known as the "Defense Department," to push back against claims.

While insisting that she wouldn't be like Tammy Wynette "standin' by my man," she argued, "it's real dangerous in this country if we don't have some zone of privacy for everybody."

Her frustrations would only increase once the Clintons got into the White House, however. Documents from the Clinton administration released last year showed her staff tried to advise her which journalists may be more friendly and to try and devise a plan to maximize positive press coverage.

"Hillary is comfortable with the local reporters and enjoys speaking with them," her press secretary Lisa Caputo wrote in one memo. "This will help us get around her aversion to the national Washington media and serve to counter the tone of the national media."

One of Clinton's longtime top aides, Philippe Reines, has had a particularly testy relationship with some members of the press. In a 2012 profanity-laced email exchange with the late Michael Hastings of BuzzFeed over the Benghazi attacks, Reines concluded by dropping the F-bomb in his response: "Now that we've gotten that out of our systems, have a good day. And by good day, I mean [expletive] Off."

Reines clashed with reporters again earlier this year amid questions about Clinton's use of a private email server at the State Department, even copying media reporters on his exchanges with Gawker. 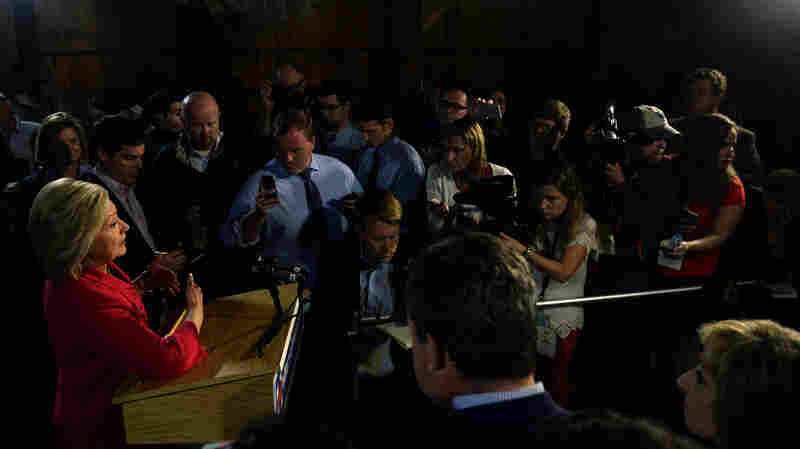 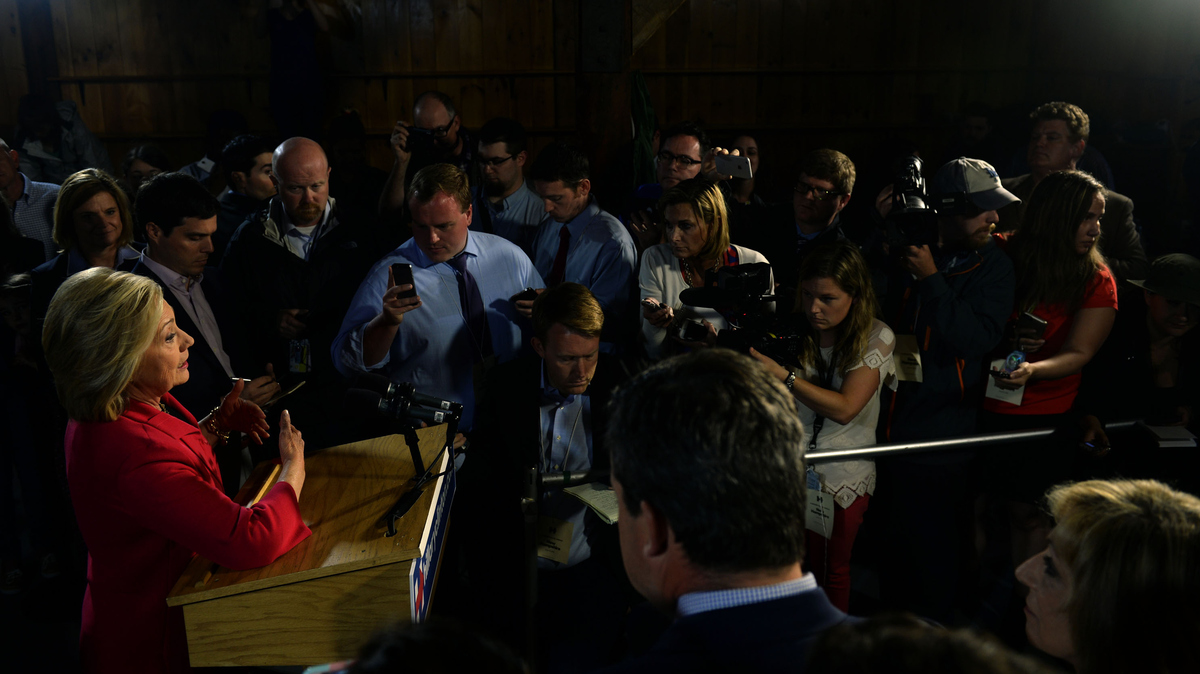 Hillary Clinton took questions from reporters for the first time as a presidential candidate on June 15 in Concord, N.H.

Inquiries about Clinton's use of that private email server persisted well after she officially declared her campaign on April 12. Instead of taking questions directly, her campaign tried to go around reporters and put out its own spin.

As NPR's Keith calculated, by mid-May Clinton had taken just 13 questions, and many of those were really nonanswers. She wouldn't give an official press conference as a candidate until the middle of June. She'll give her first sit-down interview on Tuesday with CNN's Brianna Keilar.

There was an immediate media frenzy shortly after Clinton launched her campaign via a video in April. She drew even more attention when she began her first trek to Iowa via a road trip in a black van dubbed the "Scooby Van." The media frenzy reached an all-time high when many reporters, frustrated that Clinton had yet to answer any questions from the press, took to literally chasing the van, as captured live on MSNBC. Watch the man in the orange pants.

As a way to get out information to participating reporters and cope with the demand for press access amid limited space at events, regular reporters following Clinton organized a "pool rotation" earlier this year to be sent out to all participating media outlets, similar to the way the White House does.

But when it was the London Daily Mail's turn at the helm, its political editor David Martosko was shut out. Clinton's campaign said the decision was because the Daily Mail wasn't yet a part of the regular White House rotation, but the paper pointed out it has a correspondent at the daily briefings who has been vetted and has a permanent pass.

The testy relationship with reporters isn't germane just to the Clintons, however. Here are some recent Republican candidates who have clashed with the press.

The Kentucky GOP senator is another politician who has never had a particularly warm rapport with much of the mainstream media. The problem crept up in full view earlier this year when the ophthalmologist was asked by CNBC host Kelly Evans about his tax policy. When she tried to provide some research, Paul reacted by putting his finger to his lips: "Shhh. ... Calm down a bit here, Kelly, let me answer the question."

The problem would rear its head again after Paul announced his campaign for president in April. There was backlash and charges of sexism after he got testy with NBC's Savannah Guthrie. "Why don't we let me explain instead of talking over me, OK?" Paul told her. "Before we go through a litany of things you say I've changed on, why don't you ask me a question, 'Have I changed my opinion?' That would be sort of a better way to approach an interview."

However, Paul's frustrations appear to spill out to both men and women, as he has had heated exchanges with other reporters, too.

In 2012, GOP presidential nominee Mitt Romney's campaign was often frustrated by the press, too. It hit a crescendo when reporters peppered spokesman Rick Gorka on a trip to Poland about some of the former Massachusetts governor's missteps while abroad and his not taking questions from the traveling press.

By the end of the exchange, Gorka had had it. "Kiss my ass. This is a Holy site for the Polish people," he said outside the Tomb of the Unknown Soldier in Warsaw. "Show some respect."

Later, Gorka also told another reporter to "shove it." Gorka later apologized to reporters and later took some time off from the trail.

Last month, the Florida senator and 2016 GOP hopeful was the subject of two New York Times reports — one on how many traffic tickets he and his wife had gotten and another about his family's financial struggles. Rubio immediately pounced to hit the newspaper — a frequent target of Republicans on the trail — as part of the "elitist liberal media" and used the attacks as a successful fundraising pitch.

In his fight against the newspaper, Rubio even had an unusual ally — Comedy Central's Jon Stewart. Though The Daily Show host hits Republicans more than Democrats, he's also been known to engage in media criticism. He skewered the newspaper's reporting as "inconsequential gossip."

The bombastic New Jersey governor has had an up-and-down relationship with the press. His onetime coziness with some reporters, including MSNBC's "Morning Joe," helped to catapult him to national fame. But that backfired last year when he was embroiled in the "Bridgegate" scandal into whether his top aides had directed closures on a heavily trafficked bridge as political retribution.

Christie himself has not been implicated in the scandal, but Christie said over the weekend that he feels the media convicted him. "That's what the liberal media does when, rather than saying, 'I'm sorry,' which is what they should say."

Back home, though, relations weren't great with the local press either. When he gave his State of the State address earlier this year, he invited only national media, not state and local reporters, to preview his speech. In April, the Poynter Institute noted that Christie hadn't held an open media availability for more than five months.

Sarah Palin And The 'Gotcha Media'

No one used disdain with the press to their advantage more than the then-Alaska governor and 2008 GOP vice presidential nominee, Sarah Palin. After she was Arizona Sen. John McCain's surprise pick for a running mate, media interest in the rising Republican star was at an all-time high.

But after stumbling interviews, particularly one with CBS's Katie Couric in which she couldn't name Supreme Court cases she disagreed with or what she read on a daily basis, the love affair ended abruptly. McCain's campaign bemoaned that she was "going rogue," and there were simmering tensions between the two throughout their uncomfortable partnership. After the ticket lost, Palin would continue to lambaste the "lamestream," "gotcha" media.