Accessibility links
For Limberbutt McCubbins, 'The Time Is Meow' To Run For President : It's All Politics McCubbins' human, Emilee, says she's "hoping that he'll be able to pull through the primaries, but it doesn't seem like he's getting as much press as some of the other candidates." 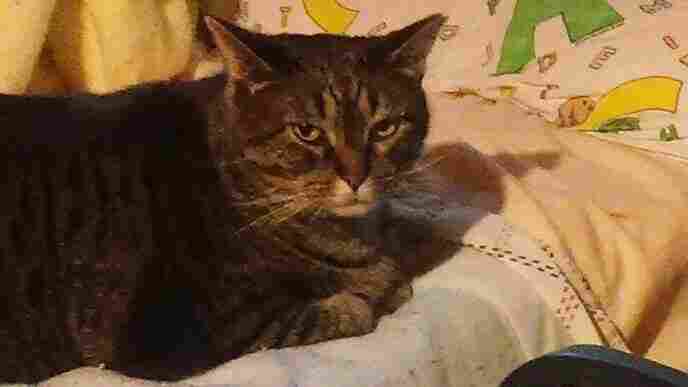 Candidate Limberbutt McCubbins is not the first non-human to become a presidential candidate. Others include a pig named Pigasus the Immortal in 1968 and Molly the Dog in 2008. Courtesy Emilee McCubbins hide caption 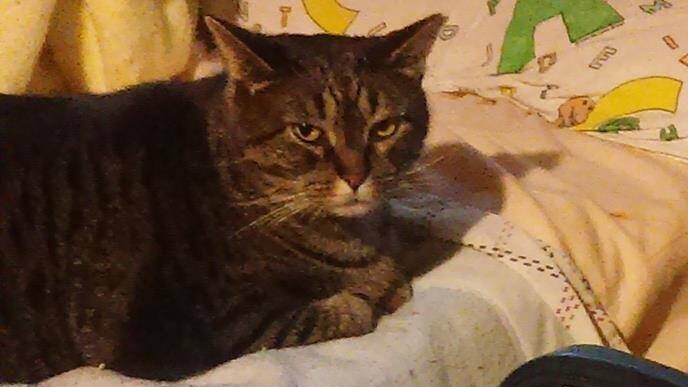 Candidate Limberbutt McCubbins is not the first non-human to become a presidential candidate. Others include a pig named Pigasus the Immortal in 1968 and Molly the Dog in 2008.

Former Virginia Governor Jim Gilmore is the latest candidate to enter the 2016 presidential race — he told the Richmond Times-Dispatch Tuesday that he plans to make a formal announcement in August.

That could bring the number of major presidential candidates to a whopping 22 by the end of the summer. But, as we've reported, there are hundreds of other candidates who have filled out the Federal Election Commission's one-page "Statement of Candidacy" form. Some are serious, some do it as a joke and others, it turns out, are not even human.

Member station WFPL brings us this story of a feline contender:

The first thing people noticed was the name.

A Louisville resident named Limberbutt McCubbins had apparently filed to run for president, gaining attention in recent months from a campaign watchdog and, most recently, The Rachel Maddow Show.

It's not entirely clear whether everyone realized that Limberbutt McCubbins is a cat.

In an interview, Isaac Weiss, 17, a rising senior at duPont Manual High School in Louisville, said he thought it would be funny to enlist his friend's cat to run for president. The presidential candidate belongs to 18-year-old Emilee McCubbins, who is also a rising senior at Manual.

So Weiss logged on to the Federal Election Commission's website this spring and created "The Committee for the Installation of Limberbutt."

According to Federal Election Commission filings, Limberbutt is a Democrat. Or as Weiss puts it, a "demo-cat."

Weiss and Emilee McCubbins say they have already gotten letters about Limberbutt's candidacy—some going as far as to ask for proof of the cat's citizenship. Other letters are seeking information about possible volunteer opportunities to help get McCubbins in the White House.

"I got a letter in the mail from a lawyer wanting to represent him," McCubbins said. "I've gotten numerous emails."

Weiss added: "It does not appear that they know that he is indeed a cat."

Candidate McCubbins is not the first non-human to become a presidential candidate. Others include a pig named Pigasus the Immortal in 1968 and Molly the Dog in 2008.

Anyone can start a committee to explore running for president, but actually getting on the ballot requires fundraising, an FEC spokesman said. It doesn't break FEC rules, per se, for a committee to be launched for a cat, the spokesman added.

Weiss said he and his friends started this process — which already includes a Facebook page ("The time is meow, watch out Hillary!" declares one post) and campaign swag — mostly as a joke.

"We often joked around that Limberbutt would make a great president," Weiss said of the 5-year-old cat.

He said what stood out to him was that it was even possible to register a cat with the FEC.

"Anyone can easily run for president, which is why if you go to the FEC website you'll see over 200 people listed—including Limberbutt," Weiss said.