Accessibility links
How To Take A Picture-Perfect Presidential Candidate Selfie : It's All Politics This election has been called the "selfie election." It turns out there's an art to the political selfie. And with this many candidates running for president, they are in need of some advice.

We asked NPR listeners to send in their selfies with the candidates and around 50 people did. Here are some of our favorites.

"Pics or it didn't happen" is a common refrain these days. You can't just experience life. You have to document it. And so, when fans line up to shake hands with a presidential candidate, that handshake often really isn't enough. It's all about the selfie — a self-portrait shot from a cellphone. And candidates are being deluged with selfie seekers on the trail.

Selfies are "a part of American culture" and, for candidates, taking them has to be part of a broader digital campaign strategy, said Brian Donahue, founder and CEO of Craft Media Digital, a political communications firm.

"The point or the objective is really to expand your message and expand your audiences," he said. "I think selfies are a really exciting visual way to show support and say that this is a candidate that I'm behind, I'm excited about. I want to share that in my own social network."

Clay Aiken, American Idol turned 2014 congressional candidate, was a master of the campaign selfie. He even had a hashtag — #SelfieswithClay.

Now, he didn't win his race. It wasn't even close. But Aiken had the selfie down to a science. Rather than waiting for people to figure out their camera phones and fumble around. He'd just grab it and shoot himself.

"I started doing it because everybody has the same phones but nobody knows how to use anybody else's, so it was just easier for me to take them myself," he told me last Fall.

And as a result, he had a certain amount of control over the angle.

"I can always do it and make myself look like you can't see all the chins I've added from eating so much," he said.

That's right candidates, when executed correctly — shot from just above eye level — a selfie can be slimming.

For more advice on the perfect selfie, I turned to an expert from outside the political world — Stephanie Saltzman, associate digital editor for allure.com.

She's the author of an article called "How to Look Good in a Selfie," which includes advice like: find the best lighting, and consider your background. Another one, be yourself.

"I think as long as it seems genuine, you know, like a real smile. And just sort of like you're having fun with it, then it's going to be flattering and it's going to something that reads well to the public," she said. 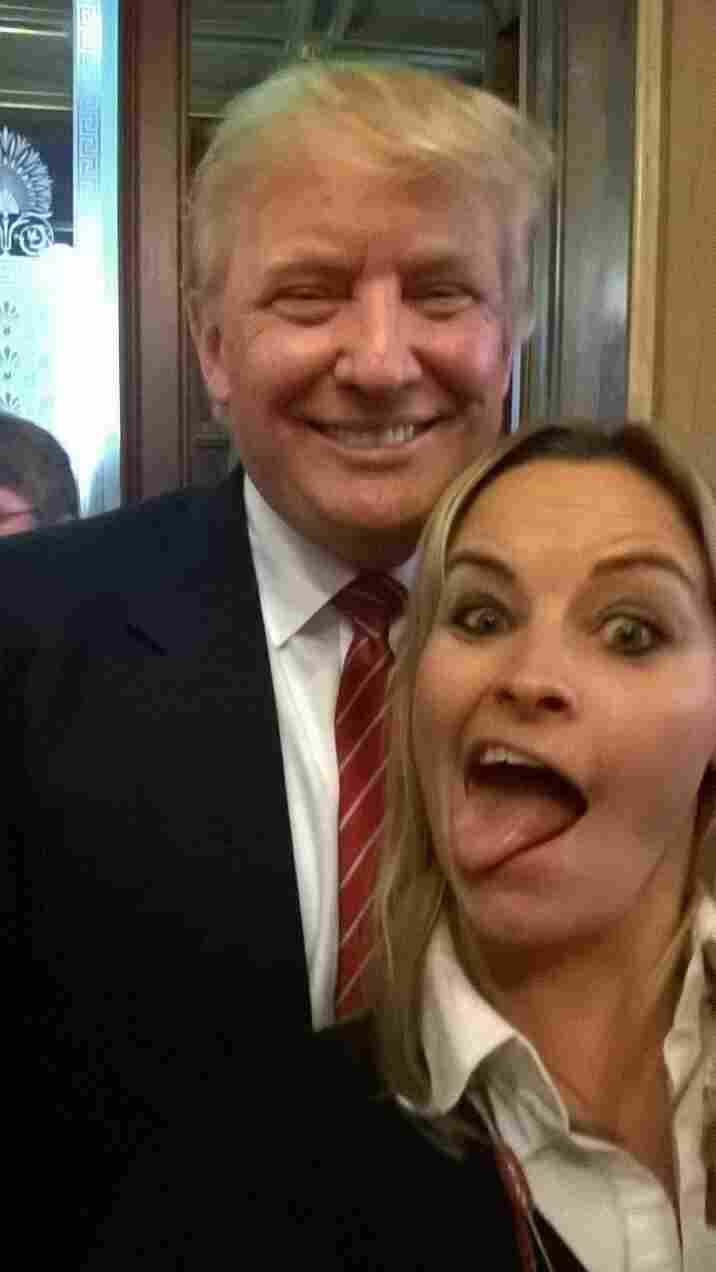 Maggie Fitzgerald says she started out taking selfies with a regular smile. Now she makes goofy faces. Her advice: "Go in with a great attitude because it does make an impression." Courtesy Maggie Fitzgerald hide caption

If there were a record for most selfies taken with 2016 presidential candidates Maggie Fitzgerald might hold it. She's a state lobbyist based in Des Moines with easy access to candidates — so she's taken selfies with everyone from Hillary Clinton to Scott Walker and Donald Trump.

She started out doing a normal smile. Now she makes goofy faces in her selfies with presidential candidates. And she has a suggestion for them:

"I would say go in with a great attitude because it does make an impression," she said.

There's one candidate, whom she wouldn't name, who she said had a bad attitude.

"I know it sounds stupid, but it's not that I'm going to — whoever takes the best selfie or whoever comes in with the best attitude I'll caucus for. It's more of, are you a jerk to everybody?" she said.

The bottom line, said Saltzman from Allure: just embrace it.

"If you try to fight it, you're going to look awkward and like you're just very out of touch."

Or as the borg said on Star Trek — resistance is futile.