Accessibility links
5 Things You Should Know About Scott Walker : It's All Politics The Wisconsin governor's rise in the GOP has been swift, helped by his crusade against public sector unions. But the 47-year-old presidential hopeful has been a candidate in the making for years. 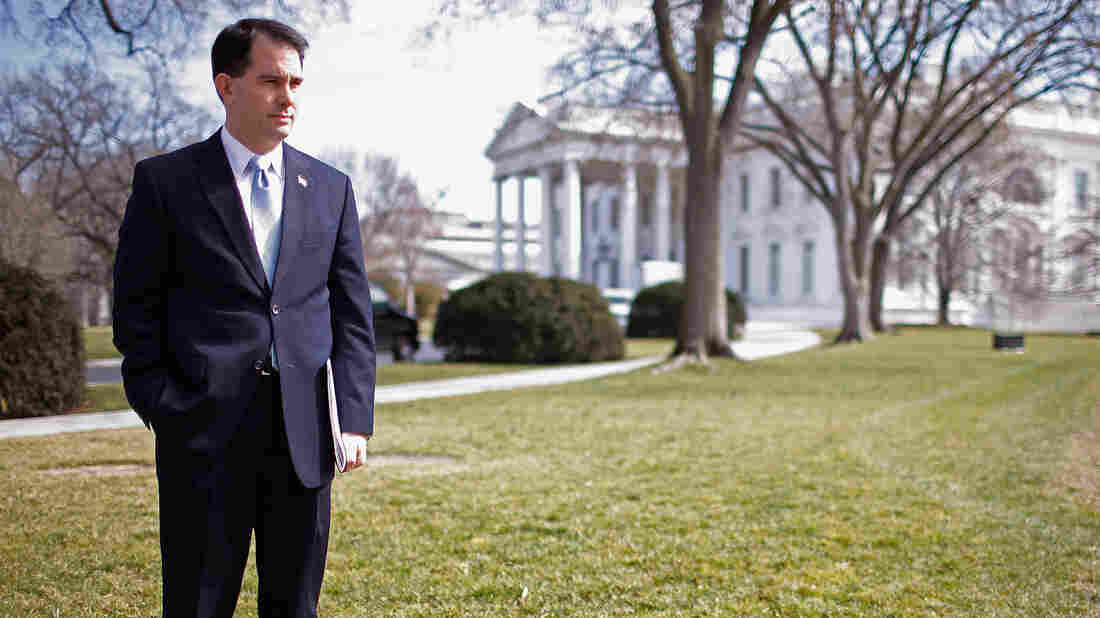 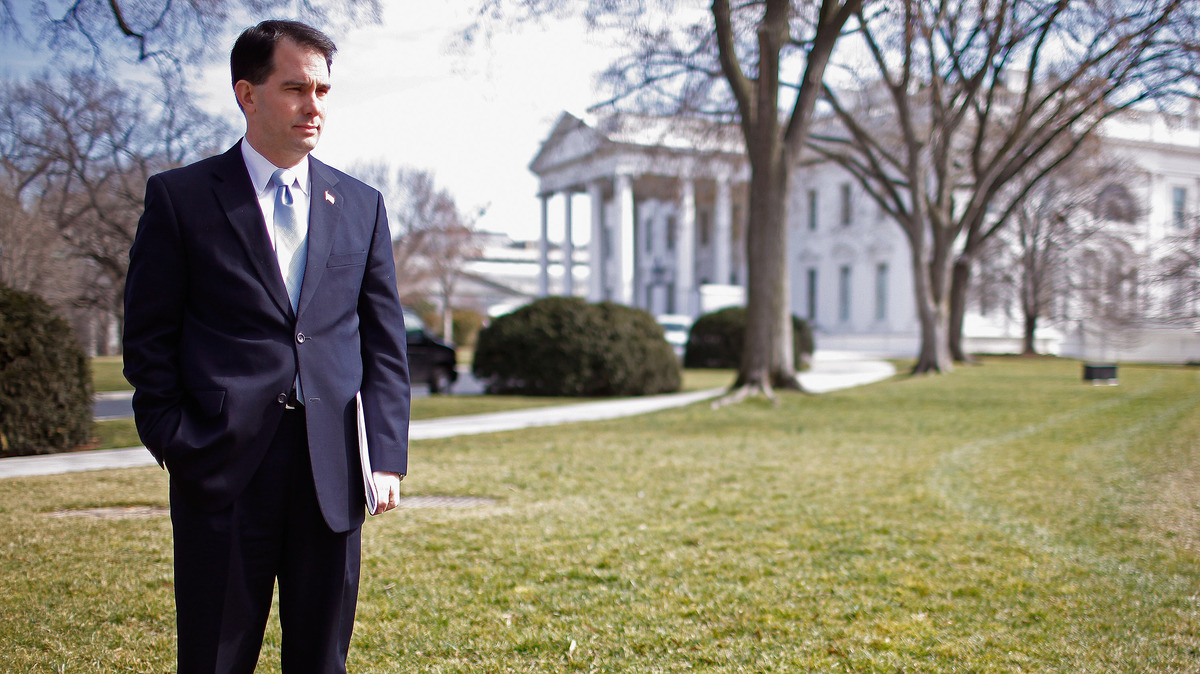 Wisconsin Gov. Scott Walker's rise as a national political star has been swift. He was elected statewide three times in four years.

Wisconsin Gov. Scott Walker will announce his long-expected campaign for president on Monday in Waukesha.

The Republican begins as the favorite in early primary state Iowa, a post he's kept since his rousing speech there in January. He benefits from being the neighboring governor and will look now to carve a path that goes beyond the Hawkeye State. He has vaulted into the top tier of GOP White House hopefuls and is a lock to make the debate stage next month.

Walker's bitter fight with unions in his state propelled him into the national spotlight, and his battle scars earned him the respect of Republicans. Perhaps like no other candidate, he can bridge the traditional conservative vs. establishment divide, appealing to parts of each bloc.

Here are five things you should know about the 47-year-old politician:

1. He was elected statewide three times in four years 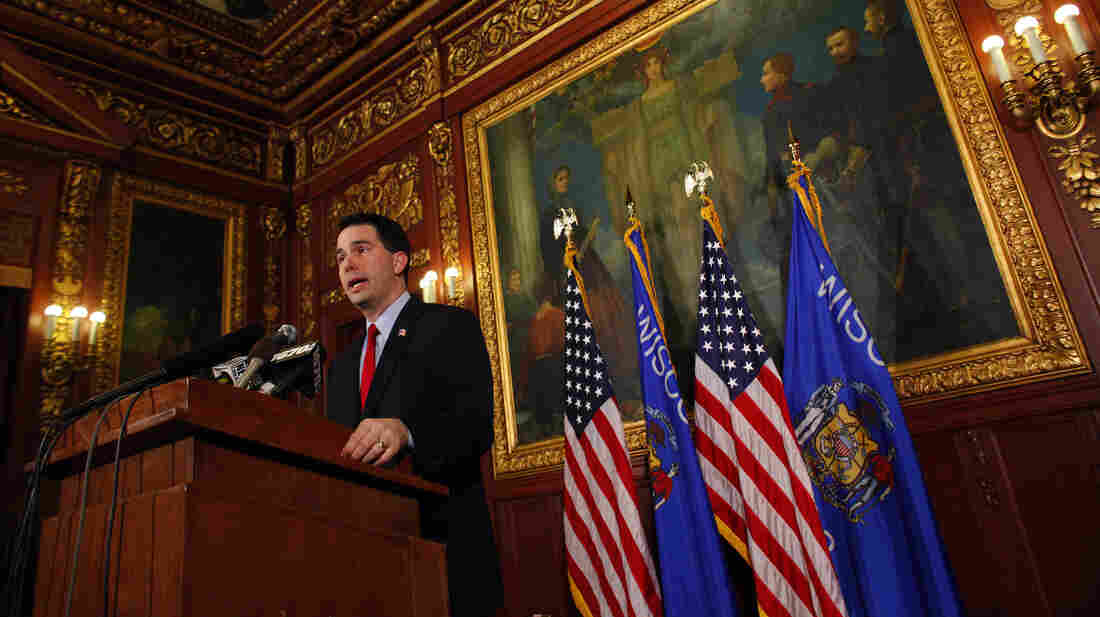 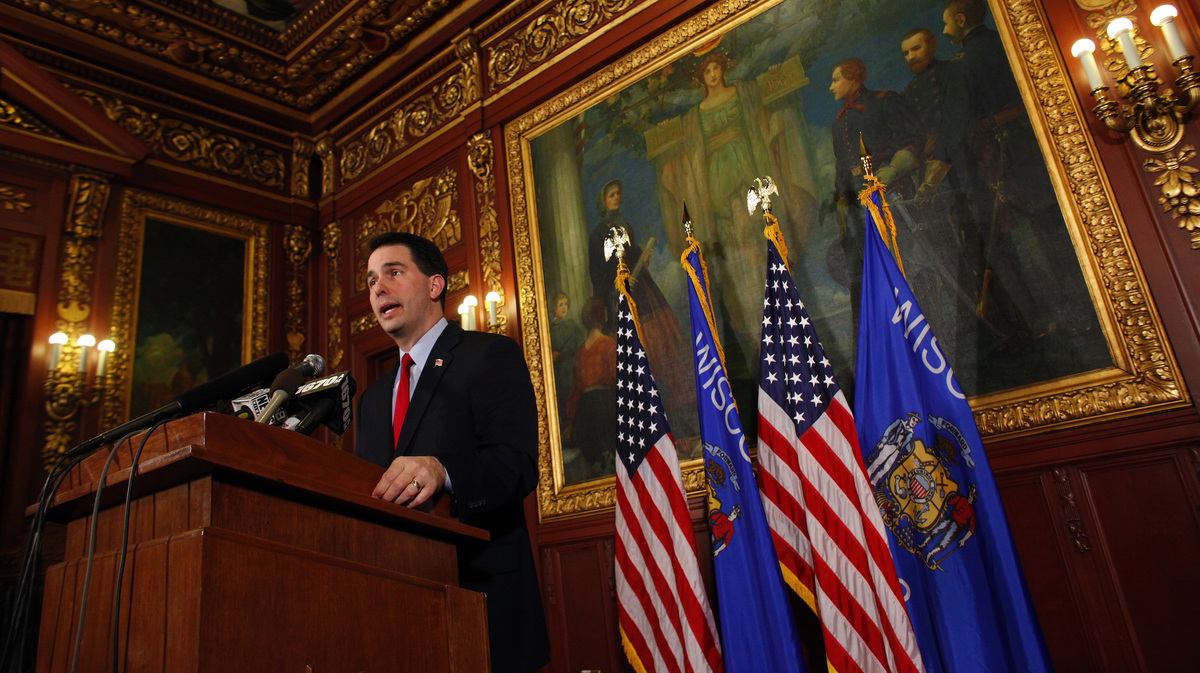 Republican Gov. Scott Walker at a news conference inside the Wisconsin State Capitol in 2011.

Walker's rise as a national political star has been swift. In 2010, he was just 43 years old when he used his platform as the Milwaukee County executive to capture the Wisconsin governorship in a GOP wave across the country. His platform was more jobs, smaller government and spending cuts.

When he first took office, Walker was not that well-known, even by people in his own state. Then came the battles with public employee unions and the massive protests at the state Capitol in Madison. Walker triumphed, though, and the unions were stripped of collective bargaining rights, making a state with a long industrial tradition a right-to-work state. 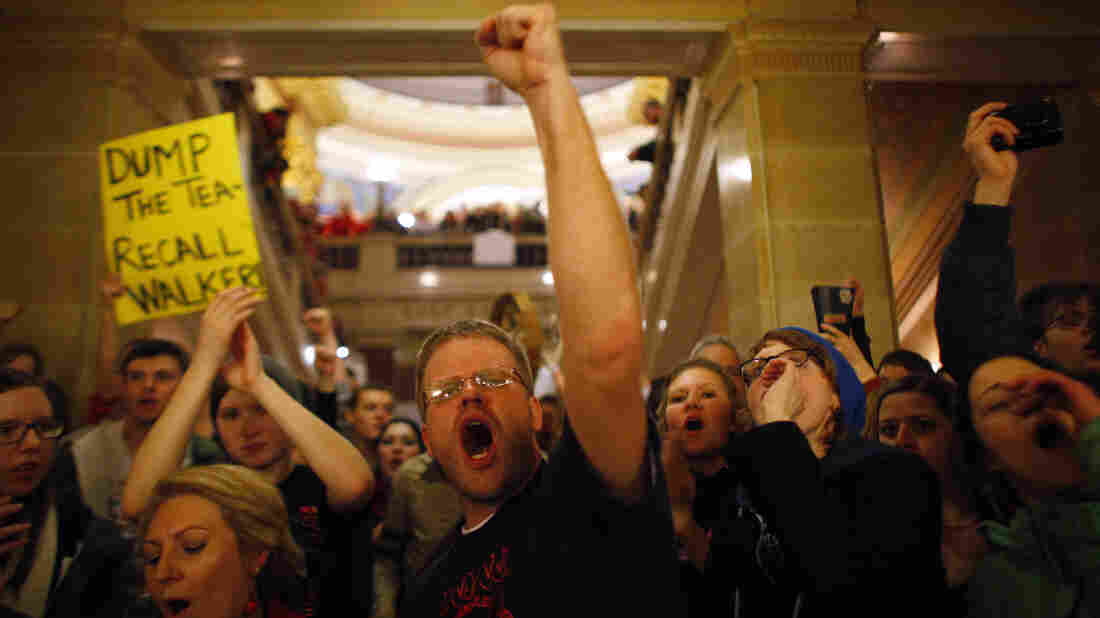 Protesters react to an appearance by Walker at the Wisconsin State Capitol in 2011. Eric Thayer/Getty Images hide caption 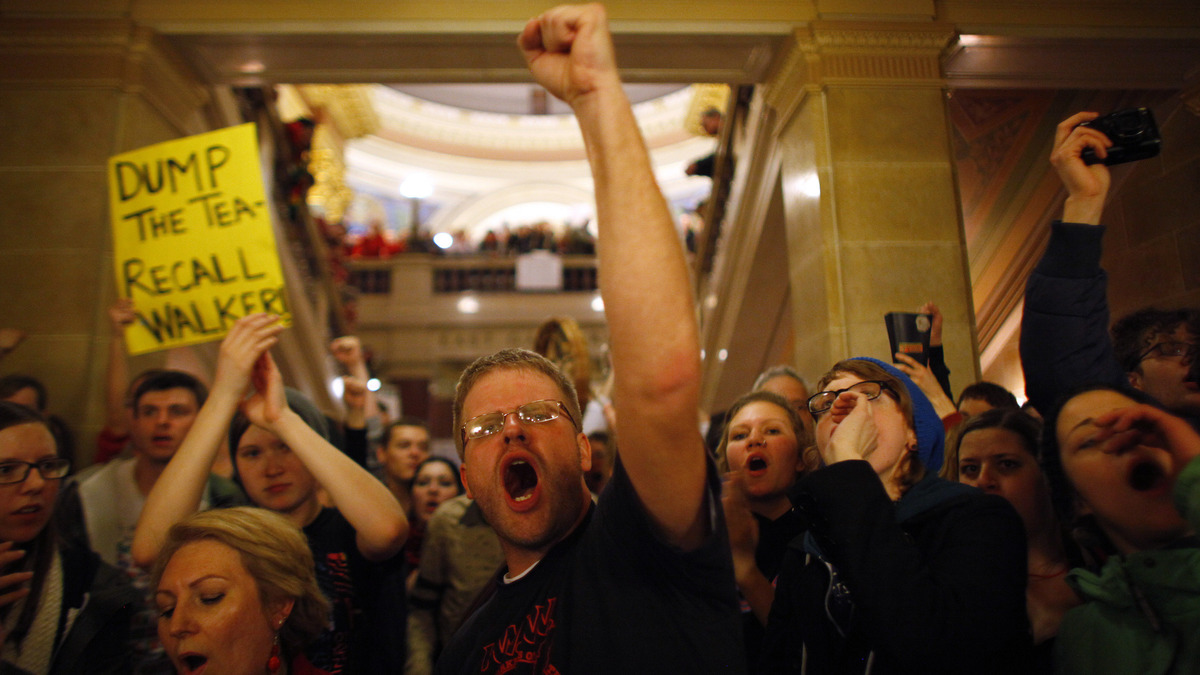 Protesters react to an appearance by Walker at the Wisconsin State Capitol in 2011.

Suddenly, he was a hero to national conservatives, who saw a potential superstar in the making for taking on the Democratic labor base.

But to have any national future, he'd first need to survive in his own state. A labor-led recall election in 2012 failed, coming just 17 months after he took office. Two years later, he won another hard-fought race in the decidedly purple state that served as another referendum on Walker and his record.

2. He is tied to three presidential battleground states 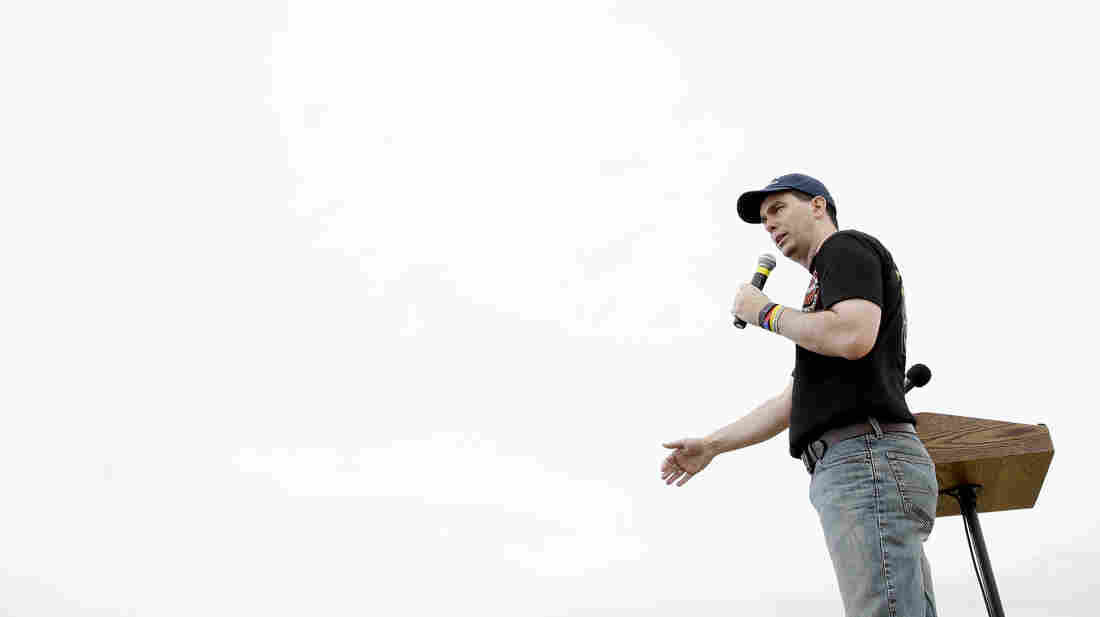 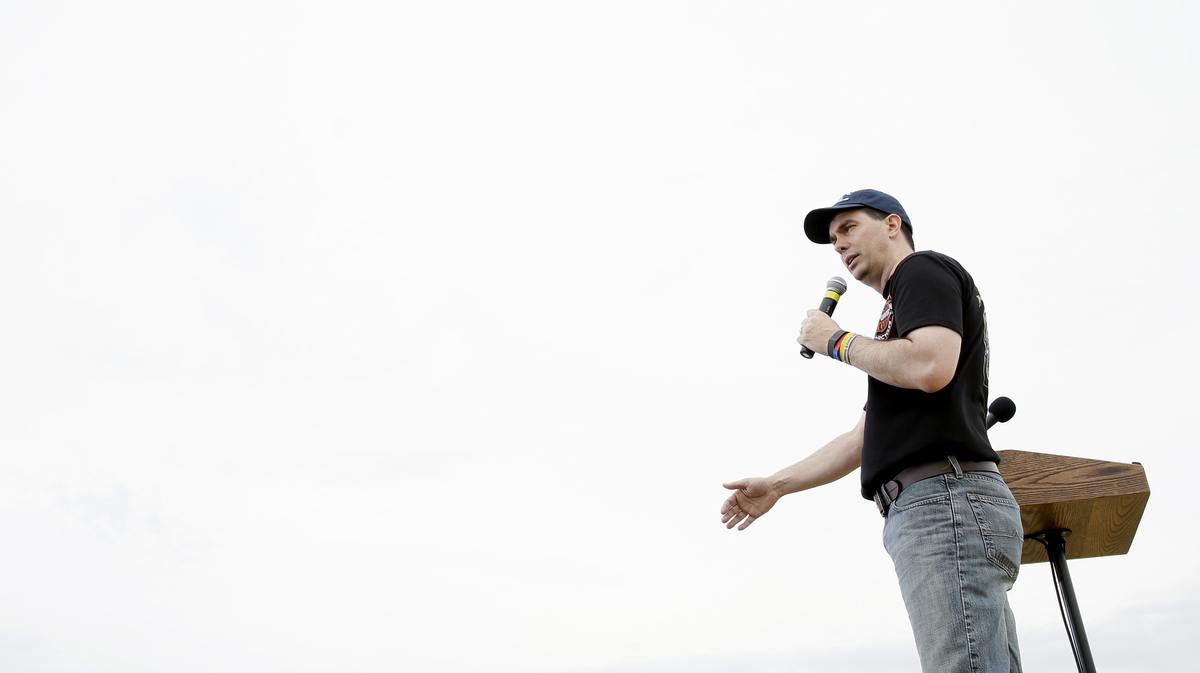 Walker has the distinction of being able to claim a connection to three White House battleground states. He was born in Colorado Springs, Colo., in 1967. The state went to the Democrats in the last two national elections, but it voted Republican in nine of the previous 10 presidential contests.

Walker lived in Denver just three years before his Baptist minister father moved the family to Plainfield, Iowa. They lived there just seven years, but when campaigning in Iowa, Walker is quick to mention his memories of growing up in a town with a population of less than 1,000.

At age 10 in 1977, Walker moved to Wisconsin, and he's been there ever since. Still, it's a question whether Walker's Badger State pedigree can help a conservative Republican carry the state in a presidential year. The state is considered evenly divided politically, and while the GOP does do well in state elections, its electoral voters have still gone to the Democrat since 1988.

Walker's first political endeavor was a successful one. According to his mother, an 8-year-old Scott, then living in Plainfield, noticed the city buildings didn't have a state flag.

"He collected money and bought a flag," Patricia Walker told WisconsinWatch.org. "He went around carrying a mayonnaise jar."

He joined the Boy Scouts when he was 10 and would rise to the top level of Eagle Scout, becoming one of just two students to represent Wisconsin at the American Legion's "Boys Nation."

His first run for office failed, though. While attending Marquette University, a Catholic institution in Milwaukee, as a business major, Walker was very active in campus politics. He ran for student body president, but despite an energetic and aggressive campaign, he lost. His teachers note he may have long had the aura of a politician though — describing him as wearing a suit to class every day at Marquette.

But soon, Walker was gone from the Marquette campus — dropping out in 1990, 34 credits shy of his degree. It was technically his senior year, but to earn those credits he would have needed 10 or more classes to graduate.

According to the Washington Post, spending too much time on his failed bid for class president might have cost him: "He had managed to line up 47 campaign endorsements, including ones from the ski team and the varsity chorus, but he had trouble showing up on time for French."

Walker's explanation is pretty simple — he got a job at the American Red Cross, and while he would often think about going back to finish, he just never did. The last U.S. president to not have a college degree was Harry Truman, who dropped out of Spalding's Commercial College in Kansas City.

Politics were still never far from Walker's mind, degree or not. The year he dropped out, he ran for the Wisconsin State Assembly and lost. Three years later, he would finally be successful, winning a seat in the Assembly in a special election.

5. The mystery of the Desperado 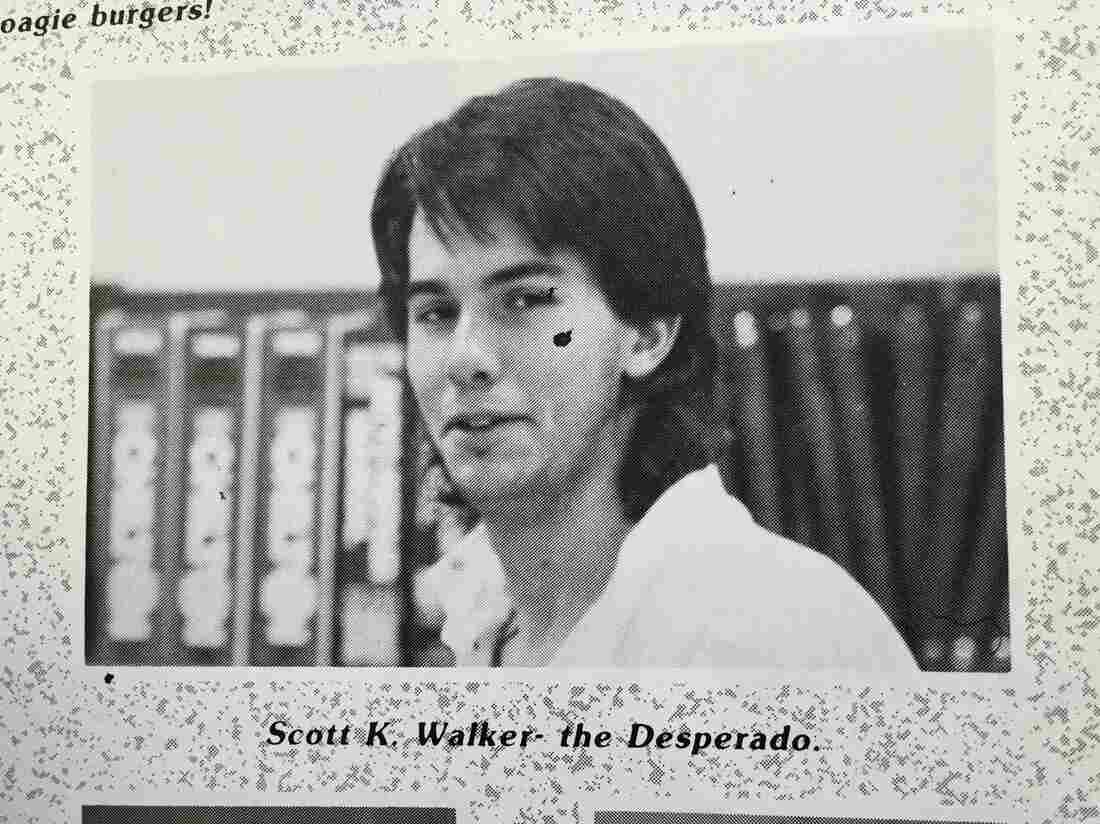 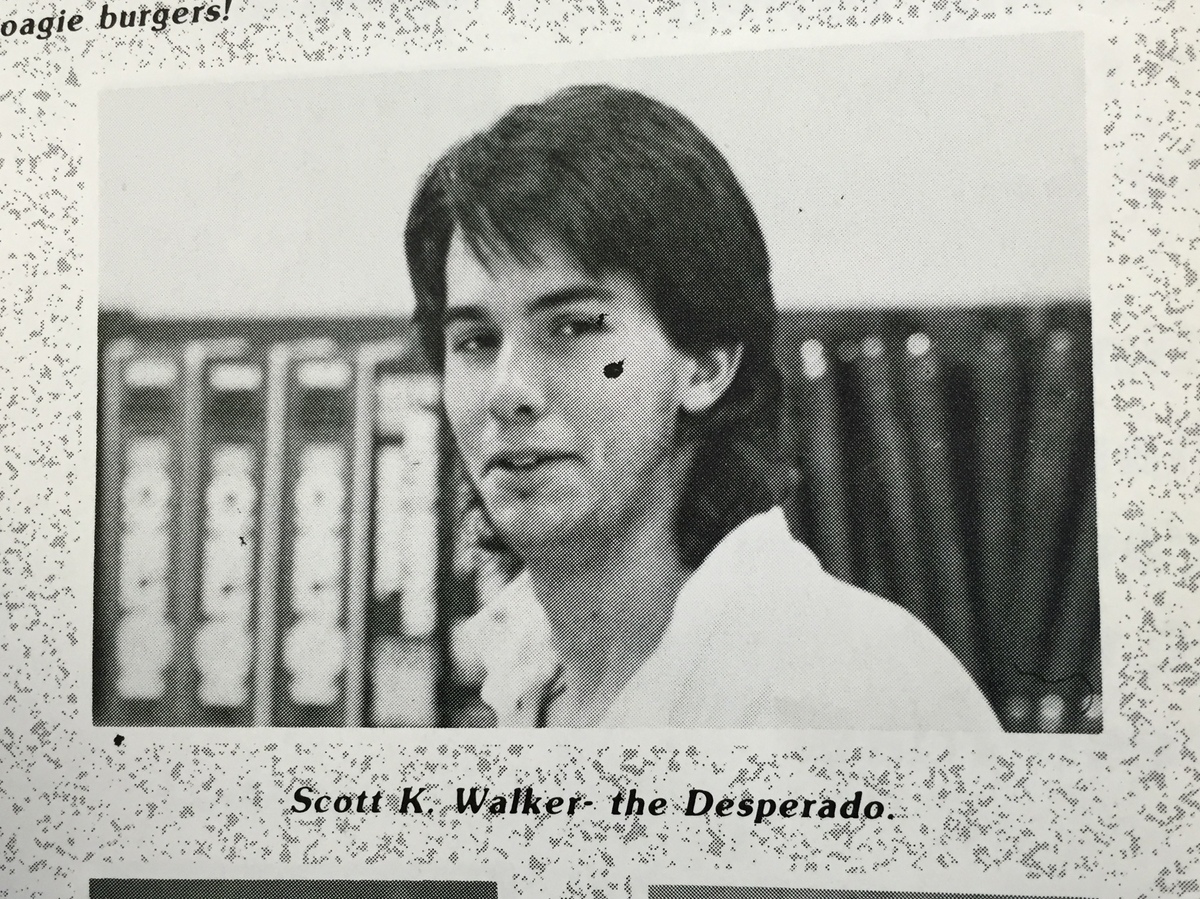 If you open the 1986 Delavan-Darien High School yearbook, you'll find a black-and-white head shot of a teenage Scott Walker. Below the photograph is a caption: Scott K. Walker — the Desperado. Sadly, there are no explanation and no further words on the topic. Did Walker give himself the moniker? Was it a nickname? Was it simply a spur-of-the-moment inside joke by the yearbook staff? Give a look and see if the answer reveals itself to you.

In an earlier version of this story, we incorrectly said Scott Walker was born in Boulder, Colo. He was actually born in Colorado Springs. We also incorrectly indicated that his hometown was Waukesha.