Accessibility links
Lots Of Other Countries Mandate Paid Leave. Why Not The U.S.? : It's All Politics Hillary Clinton, Bernie Sanders and President Obama are fond of pointing out that the U.S. stands nearly alone in not giving its workers paid leave. Here's how it got that way. 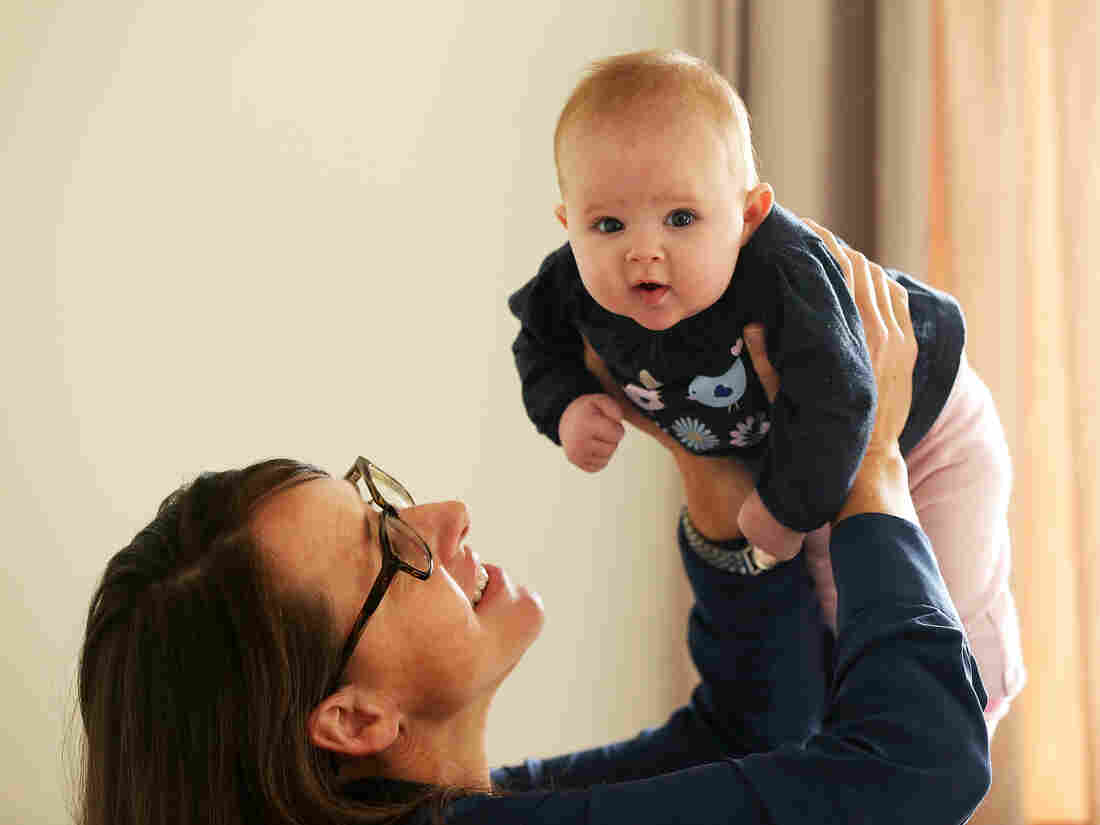 Secondary school teacher Sarah Ward at home on maternity leave with her 3-month-old daughter, Esme Kelliher. A resident of New Zealand, Ward has access to paid leave, something many American mothers do not. Fiona Goodall/Getty Images hide caption 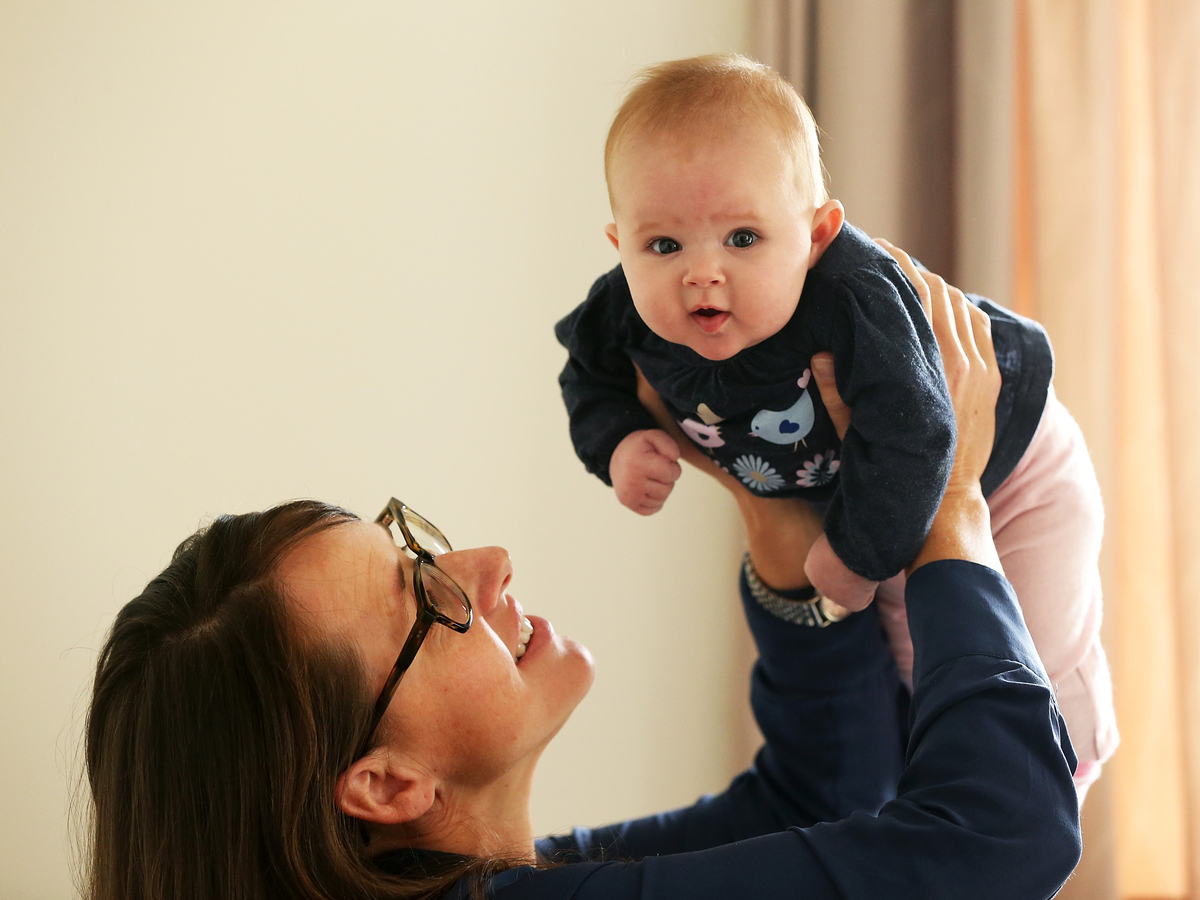 Secondary school teacher Sarah Ward at home on maternity leave with her 3-month-old daughter, Esme Kelliher. A resident of New Zealand, Ward has access to paid leave, something many American mothers do not.

If you've been paying attention to the political news in the past couple of years, you know that the U.S. stands virtually alone in not mandating paid leave of any type for its workers.

It's hard to miss; the topic has become a top talking point for Democratic politicians. Hillary Clinton is advocating for stronger paid-leave policies on the campaign trail. In her Monday economic address, Clinton called for paid family leave as a way of helping women stay in the workforce. Sen. Bernie Sanders, her closest rival for the Democratic nomination, has advocated both paid vacation and paid maternity leave on the campaign trail. In addition, some cities and states have started instituting their own sick leave policies.

President Obama likewise brought new attention to paid leave this year as well, when he pointed out in his State of the Union address that the U.S. is the only advanced economy that doesn't mandate paid sick or maternity leave for its workers.

He was right about that — it's true that most American workers are covered by the Family Medical Leave Act, which allows workers up to 12 weeks of leave per year to care for family members. But that leave is unpaid.

Here, for example, is where the U.S. stands on paid maternity leave in comparison with other countries in the OECD, a group of highly developed economies:

The U.S. is the only one that doesn't mandate paid maternity leave. Likewise, the U.S. is one of nine OECD countries that have no leave policies in place for fathers.

It's not just parental leave, of course — when it comes to vacation, the U.S. is also unique. The chart below shows combined mandatory vacation days and federal holidays in all OECD nations. All of the U.S. days represented below are federal holidays (which are also not guaranteed days off for all workers); the rest of the nations mandate paid vacation days in addition.

It's a similar story on sick days — among high-income countries, the U.S. alone does not mandate sick leave, according to data compiled by the World Policy Forum.

It's not at all new to point this out, but data like these pose a tougher question: How did it get this way? Why is the U.S. so different from the rest of the world in not giving workers paid days off?

You could write an entire book about the complicated forces at work here, but a mix of a few big factors has helped set this scene: The aftermath of World War II, business lobbying, a diminished American labor movement, and the American love of individualism and bootstrap-pulling all have combined to help keep the U.S. alone in not giving its workers paid leave.

One way of thinking about why the U.S. stands alone on paid leave is to zoom way, way out and consider how Americans think about democracy in general — another area where Americans are arguably unique.

Political scientist Seymour Martin Lipset spent much of his career thinking about American exceptionalism — trying to understand what exactly makes the U.S. such a strange creature. Our voting rates are low, but our volunteering rates are high, he pointed out. We're deeply religious. And while some European democracies went in a more socialist direction, the U.S. veered the other way.

For a variety of reasons, Lipset argued, Americans have a different way of thinking about their democracy — the young American democracy was founded with values like individualism and equality of opportunity at its center. And unlike many European democracies, the U.S. has never been a monarchy or a feudal society — that means there's less awareness of class divisions and less deference to the state in the U.S., Lipset writes. He also proposes a similar explanation for how labor parties and trade unions managed to be stronger in other countries but not in the U.S. — where there's less class awareness, there's less likelihood to join unions. (This is just one of many factors he uses to explain U.S. unions' relative weakness, however.)

It's easy to see how that might play out in the realm of paid-leave policies. First of all, with less labor power, there's less support of these sorts of policies. But in addition, when it comes to social class, individualistic, ambitious Americans think of not where they are but where they assume they eventually could be.

"[Lipset's] argument was that Americans identify with the social class that they aspire to rather than the social class that they were in," explains Peter Cappelli, professor of management at the Wharton School at the University of Pennsylvania. "So Americans have a lot of sympathy for small business because American people you would have thought were workers historically thought of themselves as potentially being small-business people."

The result is that Americans tend to have a bit more sympathy for business — after all, when we all own our own shops someday, we won't want our hands tied by any more regulations than absolutely necessary.

It's not just that America's attitudes differ from the rest of the world's; the gap in parental leave in particular also has its roots in the aftermath of the world wars.

"The European social democracies that emerged after WWII all wanted paid leave policies (some had them earlier) in part because of their concern about replenishing the population," Ruth Milkman, a professor of sociology at CUNY, wrote in an email.

Europe suffered both massive casualties and massive damage to its infrastructure, Milkman explains, and it needed to get more people into the workplace. That meant helping women get into work. Meanwhile, when the U.S. troops came home, it meant less of a need for women in the workplace.

"Here in the U.S., while the war was going on, you had women in jobs in factories and in all kinds of jobs the men had held. But women went home" when the soldiers returned from the war, explains Debra Ness, president of the National Partnership on Women and Families. And with all of those women returning to the home, there was less of a reason to create policies that helped them stay in the workplace.

One other force opposing paid leave is the business community. Trade groups like the National Federation of Independent Business and chambers of commerce at the state and national levels have repeatedly opposed paid-leave policies. In 2007, one U.S. Chamber of Commerce official said his organization would wage "all-out war" against paid-leave laws.

Businesses are not opposed to paid leave itself; 65 percent of U.S. civilian workers have paid sick leave, and 74 percent have paid vacation, according to the Labor Department. (The numbers are, however, slimmer for paid family leave — only 12 percent of private sector workers have access to that.)

But those in the business community say they're opposed to the government telling businesses how to institute those policies. Paid leave is expensive, they argue, and businesses should all be able to figure it out on their own.

The U.S.'s campaign finance system helps businesses keep these laws off the books, says one expert.

"Money plays a role in politics in many countries, but the extent to which the amount of dollars [is] spent on campaigns in the United States just dwarfs the amount spent in campaigns elsewhere," says Jody Heymann, dean of the School of Public Health at UCLA. "The ability [to make] very large corporate contributions plays a much more substantial role in our elections than in other countries."

With paid leave a top issue for the two front-running Democratic presidential candidates, conservative groups that oppose paid-leave laws will certainly find themselves fighting this fight in 2016, just as big-spending liberal groups that support paid-leave laws, like unions, will be pushing the cause of inching the U.S. a little bit closer to its international peers in this area.