Accessibility links
Trump Could Bump GOP Veterans Off Debate Stage : It's All Politics The billionaire businessman is under fire for remarks about prisoners of war. But his inclusion in GOP debates could mean Republicans' only two military veteran candidates don't make it on stage. 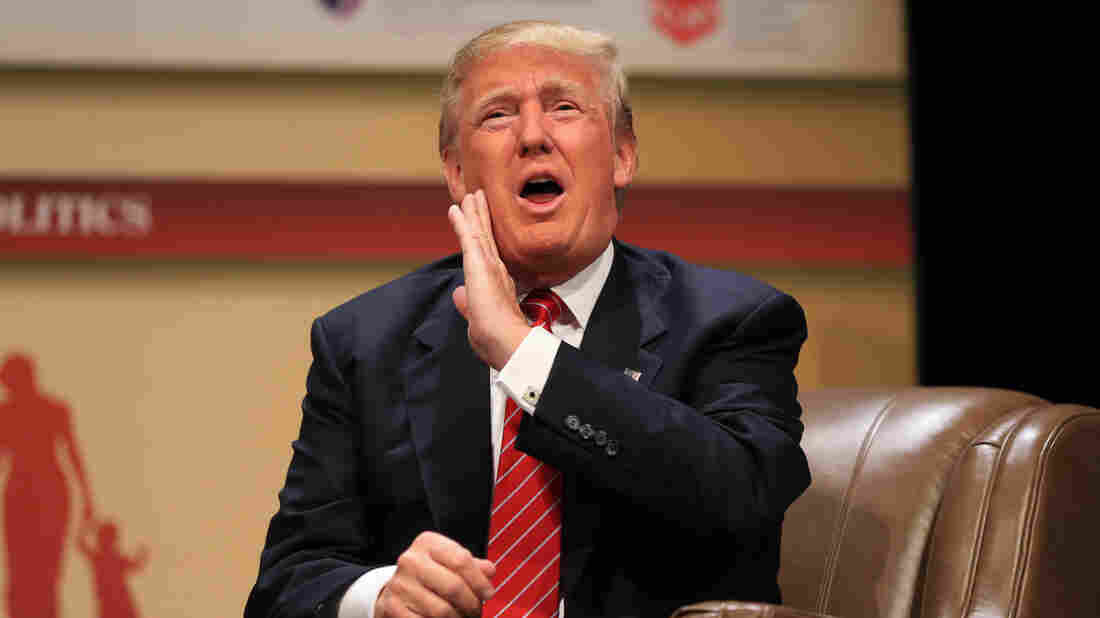 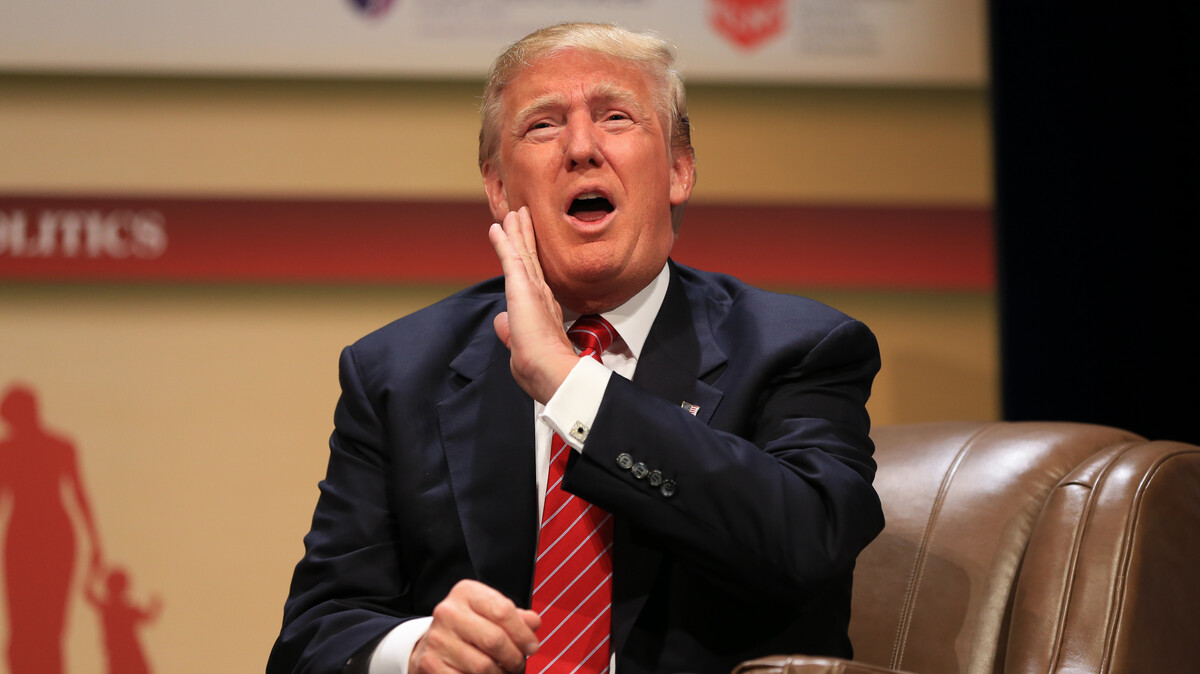 Republican presidential candidate and real estate mogul Donald Trump is polling atop recent national surveys and is a virtual lock to make the cut for next month's first GOP presidential debate.

Donald Trump quickly earned the scorn of many veterans' groups this weekend with his controversial comments about Sen. John McCain's military service.

But the irony is that the unpredictable Trump is still likely to make it into the Fox News debate next month. And if he does, he will quite possibly bump off the stage one of the only two Republican candidates who are military veterans: former Texas Gov. Rick Perry. The other veteran, South Carolina Sen. Lindsey Graham, is not close to the threshold for inclusion, but having neither Graham nor Perry on stage is sure to be an issue.

According to the Washington Post's most recent calculations, Perry just barely makes the cut for the Aug. 6 debate; the candidates on stage will be the top 10 from an average of the five latest national polls. Last week, Perry ranked 11th and looked like he would miss the debate, while Graham is further down. New polls are being released that could change that formula, but Perry is on the bubble.

The potential slight to the two Air Force veterans also comes at a time when national security is a big issue among voters. Now some Republicans are worrying about denying the vets' voice while giving Trump his greatest megaphone yet.

"I think most Republicans would find this outrageous that Trump would outshine two veterans that should be on the stage debating real issues instead of a media mogul looking to get more headlines and offer cheap shots," said GOP strategist Ron Bonjean.

Trump certainly stirred the pot Saturday in Iowa when he seemed to dismiss the Arizona senator and 2008 GOP presidential nominee's more than five years spent as a prisoner of war in North Vietnam: "He was a war hero because he was captured," Trump said. "I like people who weren't captured" 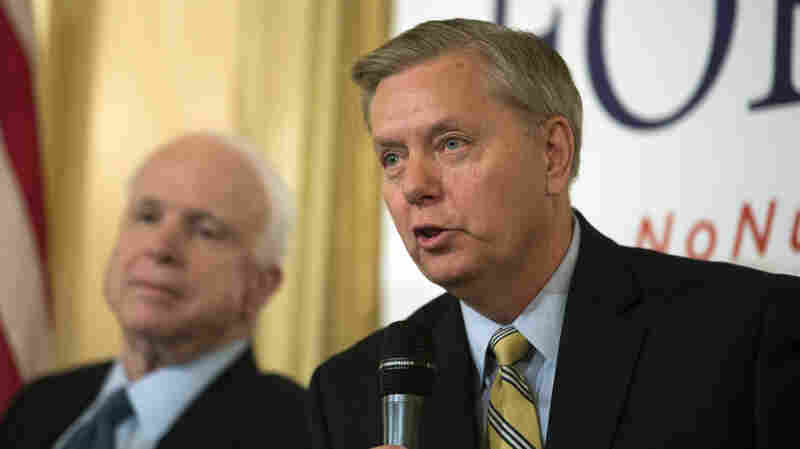 South Carolina Sen. Lindsey Graham defended his friend Arizona Sen. John McCain from comments made by Donald Trump. Graham, who recently retired from the Air Force, is at the bottom of 2016 polls. Kevin Hagen/AP hide caption 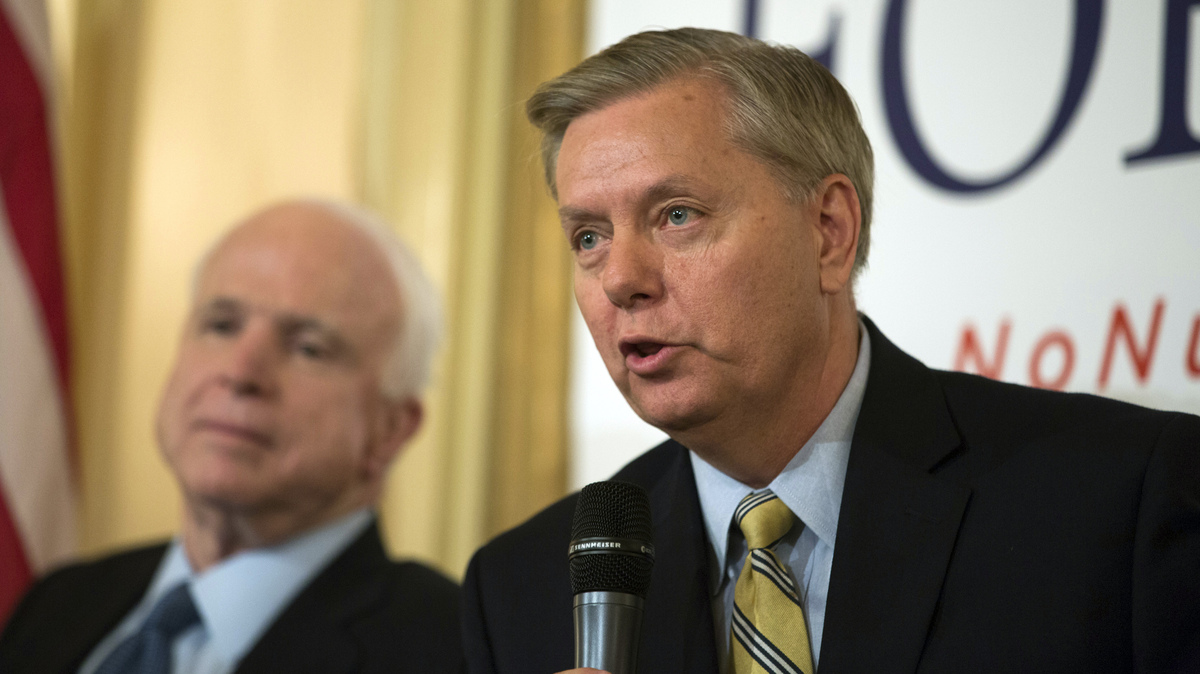 South Carolina Sen. Lindsey Graham defended his friend Arizona Sen. John McCain from comments made by Donald Trump. Graham, who recently retired from the Air Force, is at the bottom of 2016 polls.

The jab drew immediate scorn from most of his Republican rivals (although Sen. Ted Cruz declined to offer direct criticism). It also raised questions about Trump's own student and medical deferments in 1968 and 1969 that kept him out of the draft in his early 20s — during the height of the Vietnam War.

Some of the harshest reactions came from Perry and Graham. "His attack on veterans makes him unfit to be commander-in-chief of the U.S. armed forces, and he should immediately withdraw from the race for president," Perry said at the same Iowa forum where Trump had spoken out.

Graham, a close friend and frequent ally of McCain, tweeted: "If there was ever any doubt that @realDonaldTrump should not be our commander in chief, this stupid statement should end all doubt."

Military service is, of course, not a prerequisite to be the nominee or to emerge as a leader on the issue. Florida Sen. Marco Rubio has been touting his experience on the Senate Foreign Relations Committee, and other governors have been making overseas treks to bolster their own foreign policy credentials.

But the absence of Perry and Graham would be at a time when polls show national security is the top concern among voters. A Monmouth University poll on the Iowa GOP caucuses released Wednesday — that showed Trump in second place — pegged national security as far and away the biggest issue with voters.

And with those concerns paramount — including the Iran nuclear deal, the re-establishing of diplomatic relations with Cuba and the rise of the self-proclaimed Islamic State — most party activists and officials want the focus to be on how Republicans can combat security threats, not on potentially divisive statements from Trump.

"It has the potential to become a sideshow on an important issue for Republican voters," said GOP strategist Ford O'Connell, who worked on McCain's 2008 campaign for president. "Graham and Perry pretty much stay above the fray. With Trump, he's just so unpredictable and is running an entire campaign on emotion."

The good news for Republicans this year is that national security is an issue on which the GOP has traditionally done better with the electorate than Democrats. That's part of the reason other GOP contenders rushed to McCain's defense and slammed Trump's comments even after many had been silent following Trump's disparaging remarks about Mexican immigrants. While many also disagreed with Trump's language about immigrants, they didn't want to alienate that part of their party that is against any path to citizenship for those in the country illegally today. 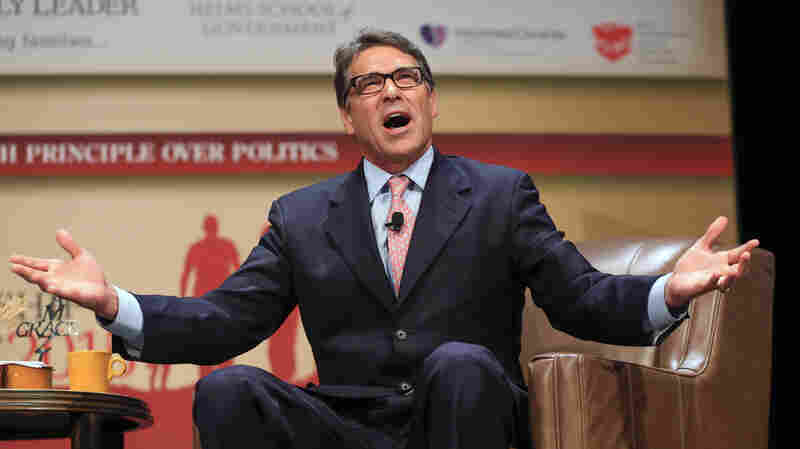 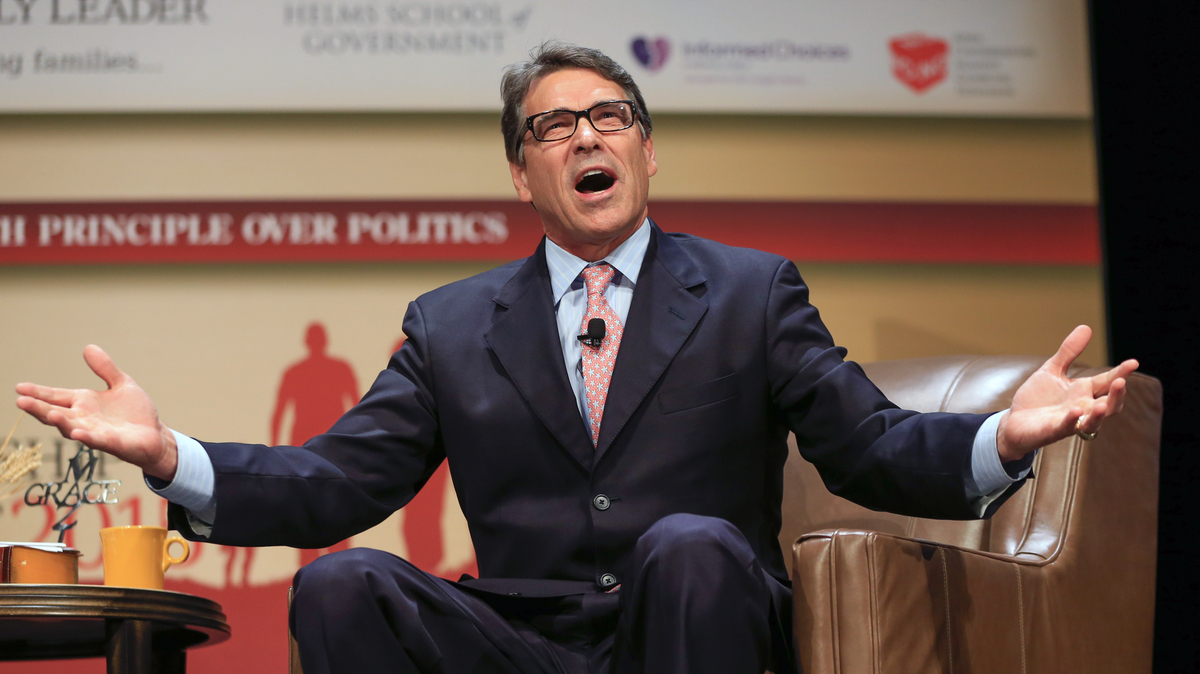 Former Texas Gov. Rick Perry may not make the cut for the first GOP presidential debate next month in Cleveland, Ohio. Perry is an Air Force veteran.

But on national security, the GOP is far more united, especially in criticizing the Obama administration's recent decisions. And strategists say that even if there are wayward comments from Trump in next month's debate, they are hopeful that other candidates would quickly have each other's backs and respond in accord.

"If there's a way to marginalize him on stage, I think most primary voters would really appreciate it," said Bonjean.

Trump, for his part, has defended his work with veterans and said he wasn't criticizing McCain's service, just saying McCain hasn't done enough to help reform VA hospitals in the wake of scandals over wait times and treatment.

"During my entire business career, I have always made supporting Veterans a top priority because our heroes deserve the very best for defending our freedom," Trump said in a statement on Sunday, pointing to his work on a veterans memorial and as grand marshal of the New York City Veterans' Day Parade.

For now, many national Republicans are hoping Trump's poll numbers — which they believe to be inflated by mere name ID and celebrity — will begin to return to Earth, and that if he flames out, they won't have to worry about him in other future debates.

"We are at the beginning of the debate process with many more to come," said Bonjean. "Who knows where this goes, but it looks like Trump has just jumped the shark."