Accessibility links
Obama And Stewart Have One Last Dance On 'The Daily Show' : It's All Politics President Obama and host Jon Stewart turned serious during their last appearance together before Stewart leaves The Daily Show next month. 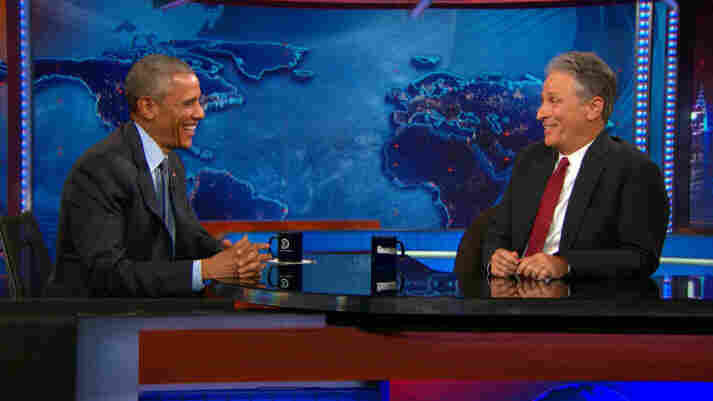 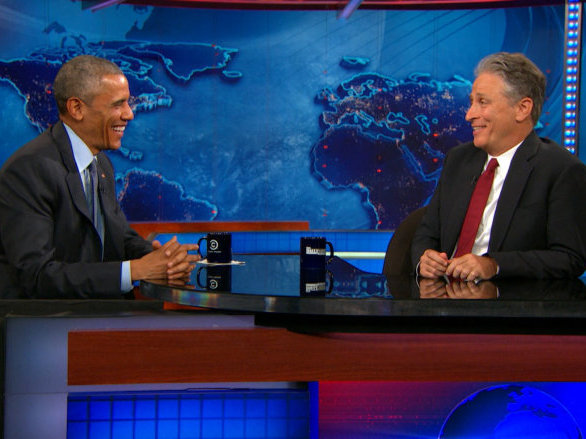 President Obama appeared with Jon Stewart on The Daily Show on Tuesday night. It was Obama's seventh appearance, and his last before Stewart leaves the show next month.

President Obama made his seventh appearance on Comedy Central's The Daily Show with Jon Stewart Tuesday night. It was a meeting of two men nearing the end of big chapters in their lives: Obama is in the final 18 months of his second term, and host Jon Stewart will leave The Daily Show next month.

"I'm not going to screw around tonight," Stewart said at the opening of the episode, leaning over his desk. He skipped his usual monologue and recap of the day's news, introducing Obama soon after telling the audience, "No one's interested in my bull**** tonight."

After the president took his seat, Stewart joked that both had senioritis. Obama responded, "I can't believe that you're leaving before me. In fact, I'm issuing a new executive order — that Jon Stewart cannot leave the show."

The pair quickly turned serious, discussing the Iran nuclear deal, problems with modern-day media and how to instill a sense of national sacrifice in Americans.

"There's no doubt that you get better as you go along," Obama replied. He said it's the result of work done earlier in his administration starting to pay off. The president said he still hopes to make further progress on climate change while in office.

Stewart is known for mixing humor with tough questions for his guests, and he did so again with the president.

Obama said a 16-nation coalition is pursuing the self-proclaimed Islamic State, and defended his strategy on Iran, saying, "This is an adversary. ... As has been said frequently, you don't make peace with your friends. The issue here is: Do we want them having a nuclear weapon? And the answer is no."

"First of all, the media is a bunch of different medias," Obama replied. "There are some that get on my nerves more than others." He said the media get "distracted by shiny objects" and fail to focus on bigger, tougher issues. "We then operate in soundbites. Part of my job and part of the job of everybody in the White House is, how do we adapt to this new environment?" Obama admitted that the White House wasn't well-adapted to a new media landscape and was slow to catch up.

Toward the end of the broadcast, Stewart asked what America has lost "in terms of shared purpose as a country, and sacrifice," citing the wars in Afghanistan and Iraq and the small fraction of Americans who actually serve in the military. Stewart suggested a year of mandatory national service. Obama said that could be a good idea, saying it could be linked to programs like AmeriCorps, in which young people could earn scholarships to reduce the cost of higher education.

Stewart closed the interview by asking Obama what advice he "would bequeath to future President Trump." Obama joined in the audience's laughter and said he was sure Republicans are enjoying candidate Donald Trump's dominance in the contest for their party's nomination.

"Anything that makes them look less crazy," added Stewart.

Before he rose to leave, Obama told Stewart, "You've been a great gift to the country." As the two shook hands, you could see it clearly: Stewart and Obama seem to actually like each other, and perhaps in a way, as they prepare for the next chapters of their careers, they have a lot in common, as well.