Accessibility links
How Democratic-Leaning Detroit Helped Shape Ben Carson's Conservative Views : It's All Politics Detroit is not exactly known as a haven of conservatism, especially in the black community, but a look at where Carson grew up reveals a young man determined to carve his own path. 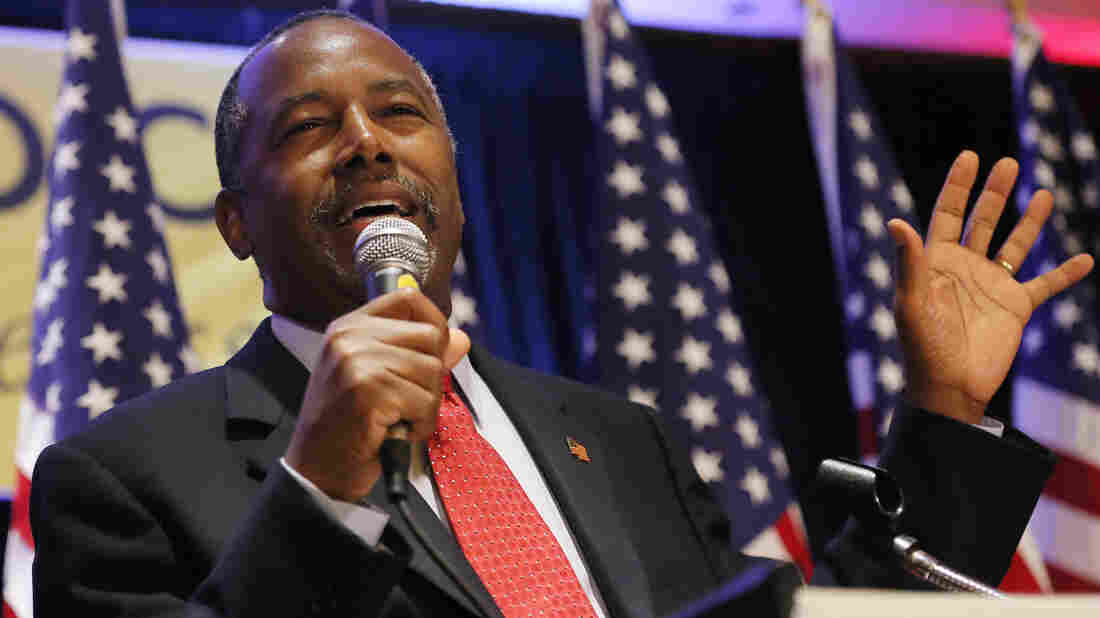 Ben Carson is the only African-American major candidate running for president in 2016. He grew up poor in Detroit in the 1960s and paved his own path. Jonathan Bachman/AP hide caption 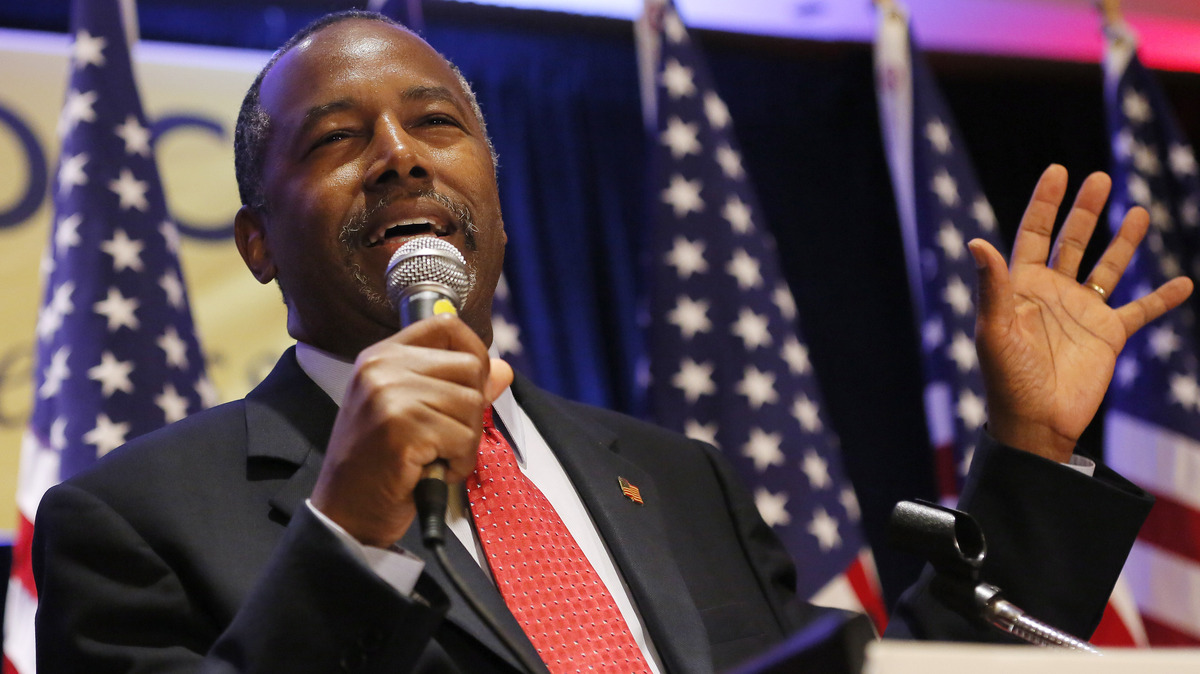 Ben Carson is the only African-American major candidate running for president in 2016. He grew up poor in Detroit in the 1960s and paved his own path.

Long before Benjamin Carson was a Republican presidential candidate, he was a hero and a role model.

For a generation of black parents, the retired neurosurgeon's life's story was used to inspire their children. He grew up poor in Detroit. His mother had a third-grade education and could not read. Carson initially didn't do especially well in school. His poor grades led some of his classmates to refer to him as "dummy." 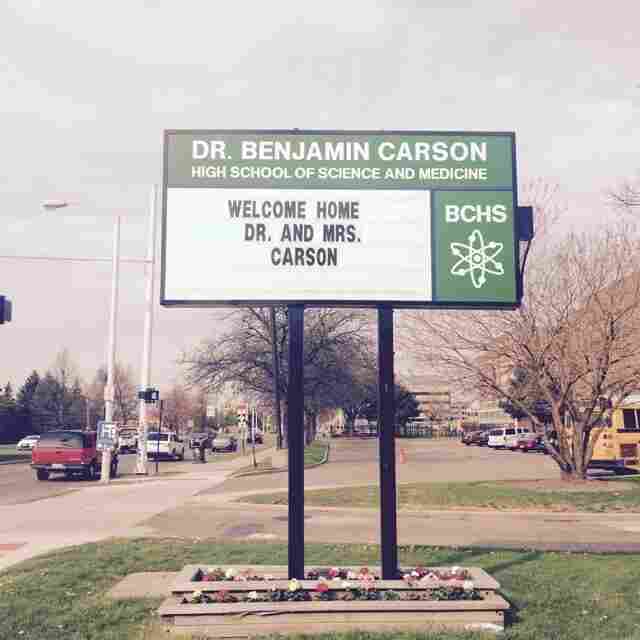 Carson would eventually overcome those obstacles. He became a stellar student and went on to Yale and then to the University of Michigan's medical school before becoming the head of pediatric neurosurgery at Johns Hopkins University in Baltimore at just 33 years old. He would later receive international recognition for leading a surgical team in what was the first operation to separate twins conjoined at the back of the head.

Despite his success, the scars of growing up in poverty left their mark on Carson.

"One of the things that really bothered me when I was a kid was poverty. I didn't like being poor," Carson said to a room full of mostly black high school students at Detroit's Benjamin Carson High School of Science and Medicine (named for him) on the day of his presidential announcement in May. "I remember we used to have popcorn balls at school. And they looked so good, but they cost a nickel. And I never had a popcorn ball, the whole time."

Carson, the only black candidate in the 2016 presidential race, grew up in Detroit during the 1960s. It was not — and is not — exactly known as a haven of conservatism, especially in the black community. Back then, the civil rights movement was gaining momentum, the "Motown Sound" became synonymous with the Motor City and the Vietnam War had no end in sight. Going to where Carson grew up and talking to former classmates and friends revealed a young man determined not to allow the grip of poverty to keep him bound to southwest Detroit. 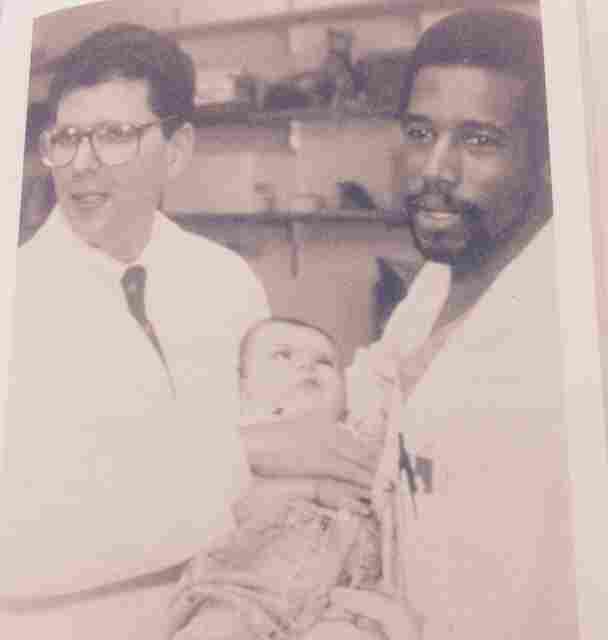 Dr. Ben Carson (right) poses with Dr. Mark Rogers and one of the Binder twins whom Carson surgically separated in a first-of-its kind operation. The twins were born conjoined at the head. Ben Carson memoir "Gifted Hands" hide caption

By 1967, riots erupted in Detroit over four days prompting Michigan's then-Gov. George Romney to call in the National Guard. Forty-three people died. Amid the unrest in the streets and the rise of the Black Panther Party, Carson chose a different path. To a degree, Carson insulated himself from the movement going on around him by joining ROTC, something that subjected him to the taunts of his peers.

Kevin Fobbs, who, like Carson, is African-American and also joined ROTC, remembers them being called "sell-outs" and "uncle Toms," because "we were putting the uniform of 'the man' on."

As an adult, Fobbs became vice chairman of the Republican Party of Michigan, but he met Carson in ROTC in 1969. Carson was a senior colonel and Fobbs was a freshman cadet. Fobbs said the discipline ROTC instilled, coupled with Carson's Seventh-day Adventist faith, helped solidify his conservative views.

"You have all those things working at the same time and then you have a few of us that decided there had to be another way," Fobbs said. "And the other way was ROTC."

Questions Surface About His Backstory

Over the course of the campaign, some aspects of Carson's inspirational biography have been called into question. As NPR Politics reported last month, Carson wrote in his 1990's autobiography "Gifted Hands" that while he was still in high school, he met a Vietnam-era Army Gen. William Westmoreland, who had commanded U.S. forces in Vietnam and other military officials. 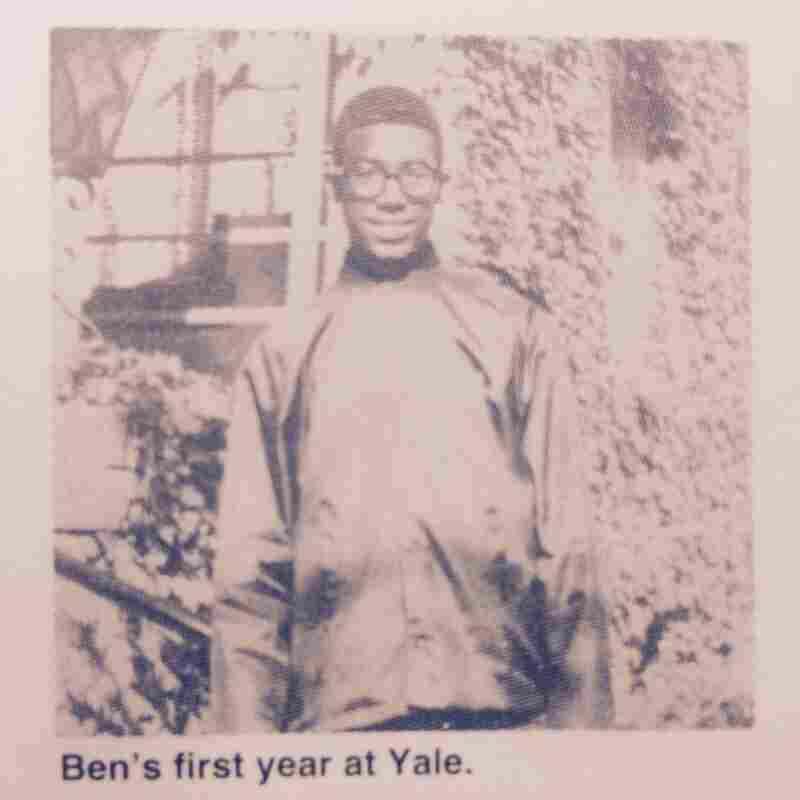 Carson said the general offered him a "full scholarship" to West Point.

Reports surfaced this fall contradicting that account, prompting his campaign to clarify that Carson was actually told he could get an appointment because of his stellar grades.

Other questions soon followed. Carson also claimed in his autobiography that he was a violent teenager who at one time almost struck his mother. In a separate incident during his youth, Carson claims he tried to stab a friend with a knife. No one NPR spoke to for this story mentioned Carson's alleged temper during his childhood.

Timothy McDaniel first met Carson in junior high school. He remembers around the lunch table and after school, Carson was taunted for far less political reasons.

"He was an easy mark because he wore these big glasses," McDaniel said. "He wasn't considered a very sharp dresser—mostly plain clothes, thick-soled shoes. His hair wasn't really stylish."

McDaniel said "capping," also known as "playing the dozens," was big in their junior high school days. It's when two competitors, typically males, go back and forth and try to out-do one another in comedic trash talk. McDaniel said Carson was the brunt of many jokes at first. But he soon overcame that, too.

"Towards the end of the school year, he had become amazing at capping," McDaniel said. "To the point where all the people who used to cap on him stopped doing it; they didn't want to say a word about him."

Carson and McDaniel remain close to this day, but McDaniel said he has noticed a difference in the way people view his friend since Carson began signaling he was considering a run for the White House.

"Before he announced his run for politics," McDaniel said, "he was considered one of America's heroes and darlings by all the people."

That's not the case anymore.

McDaniel noticed this last year when he was organizing the reunion for the 45th anniversary of his Southwestern High School class. In 2013, while speaking the conservative Values Voter Summit, Carson compared Obamacare to slavery.

"You know Obamacare is really, I think, the worst thing to happen in this nation since slavery. And it is in a way, it is slavery in a way, because it is making all of us subservient to the government. And it was never about health care, it was about control."

Those comments didn't sit well with many of their classmates, McDaniel said.

"Some wanted to tell him about the fact that, you know we all grew up together, poor," he said. "And now that he's no longer poor, they wanted to remind him that we all came from the same place."

Carson did not end up going to the reunion.

And even though McDaniel said nearly 99 percent of their classmates are Obama supporters, they are proud of Carson's success in life. Many just don't agree with his politics.