Accessibility links
Can The South Carolina GOP Get Rid Of Its Confederate Ghosts? : It's All Politics Many Republican voters didn't necessarily agree with the decision to remove the Confederate battle flag from the state Capitol. They're now worried it could mean the removal of more memorials. 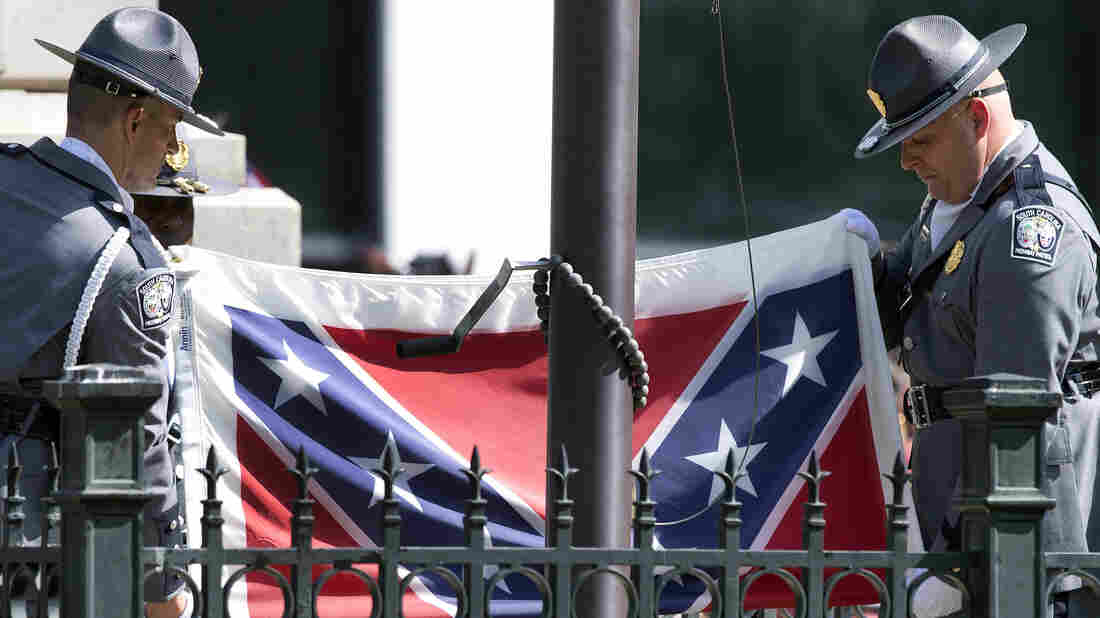 An honor guard from the South Carolina Highway Patrol lowers the Confederate battle flag, removing it from the Capitol grounds on July 10. John Bazemore/AP hide caption 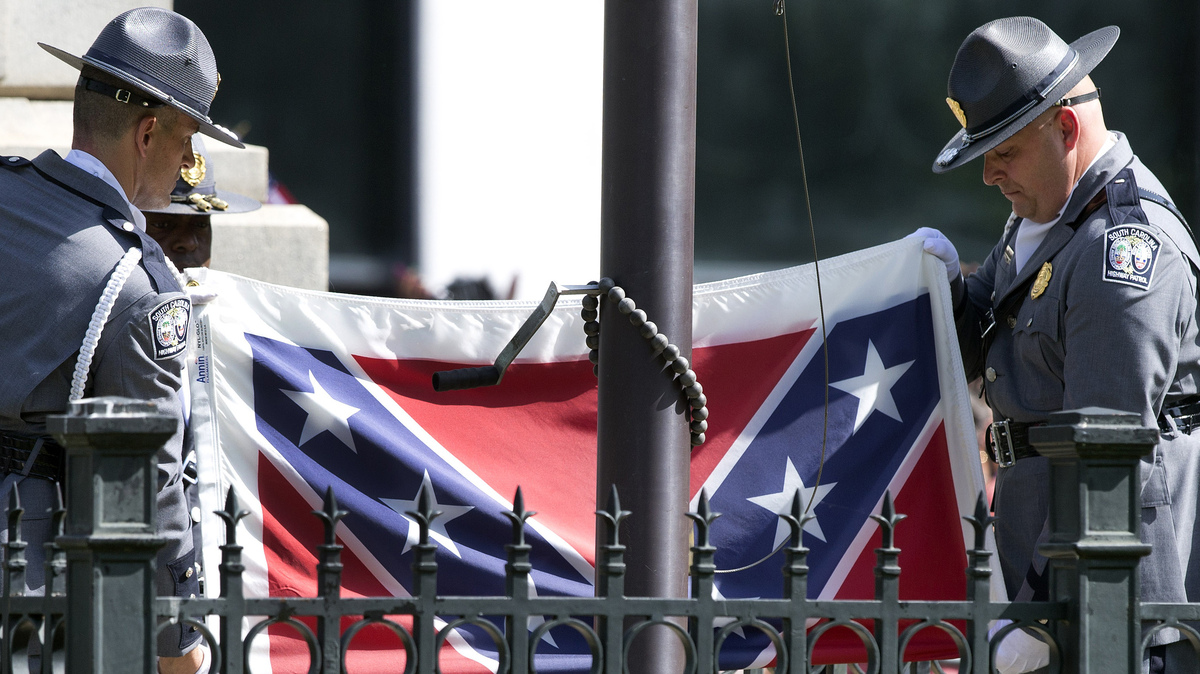 An honor guard from the South Carolina Highway Patrol lowers the Confederate battle flag, removing it from the Capitol grounds on July 10.

The controversy over the Confederate battle flag has cast a pall over the South Carolina GOP primary for decades.

Now, after the flag was finally removed from the state House grounds last month, Republicans are hoping the political football that's long tripped up White House hopefuls is gone.

But the bipartisan accord in the wake of the murder of nine African-Americans at a Charleston church hasn't translated to all GOP voters in the first-in-the-South primary, many of whom say the flag should have been left flying.

"I don't think they should have taken it down. I think it's a symbol of state's rights, and I think that's an important issue that's being trampled today," Paul Jordan said at a campaign stop in North Charleston for Wisconsin Gov. Scott Walker.

Walker, for his part, wasn't eager to talk about the decision. When pressed by reporters later at a stop last week just outside Columbia, the state capital, he simply praised Republican Gov. Nikki Haley for her role in taking the flag down and putting it in a Confederate history museum.

"It was important for her to be able to lead, and to lead with people from South Carolina, and not have other people drive that from outside," Walker said.

Other GOP hopefuls have been more blunt. Last month, Jeb Bush pointed out he lowered Florida's Confederate flag when he was governor and also put it in a museum.

"The symbols were racist," Bush declared.

It hasn't always been easy for GOP White House hopefuls to take a stand against the Confederate flag in South Carolina, where it has a complicated past. 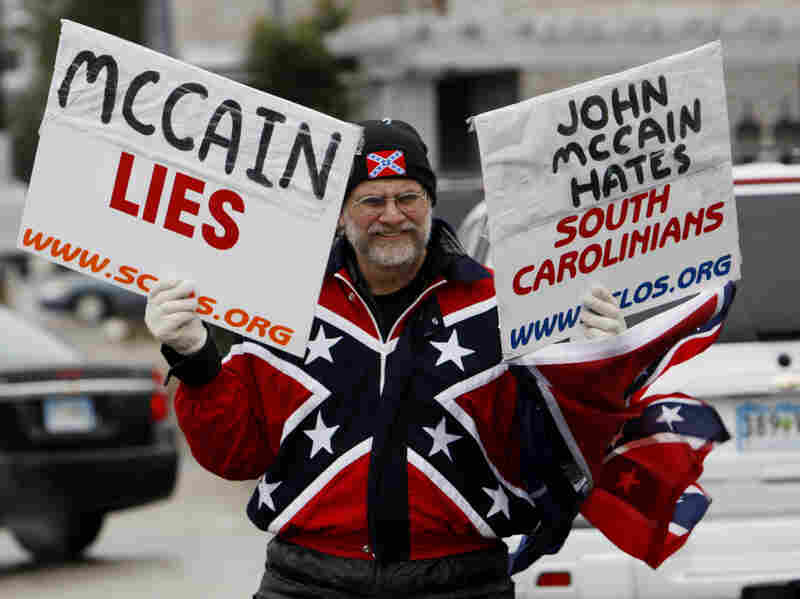 Arizona Sen. John McCain regretted not taking a clearer stand against the flag in the 2000 GOP presidential primary. When he ran again in 2008, some in the state didn't forget his change of heart. Charles Dharapak/AP hide caption 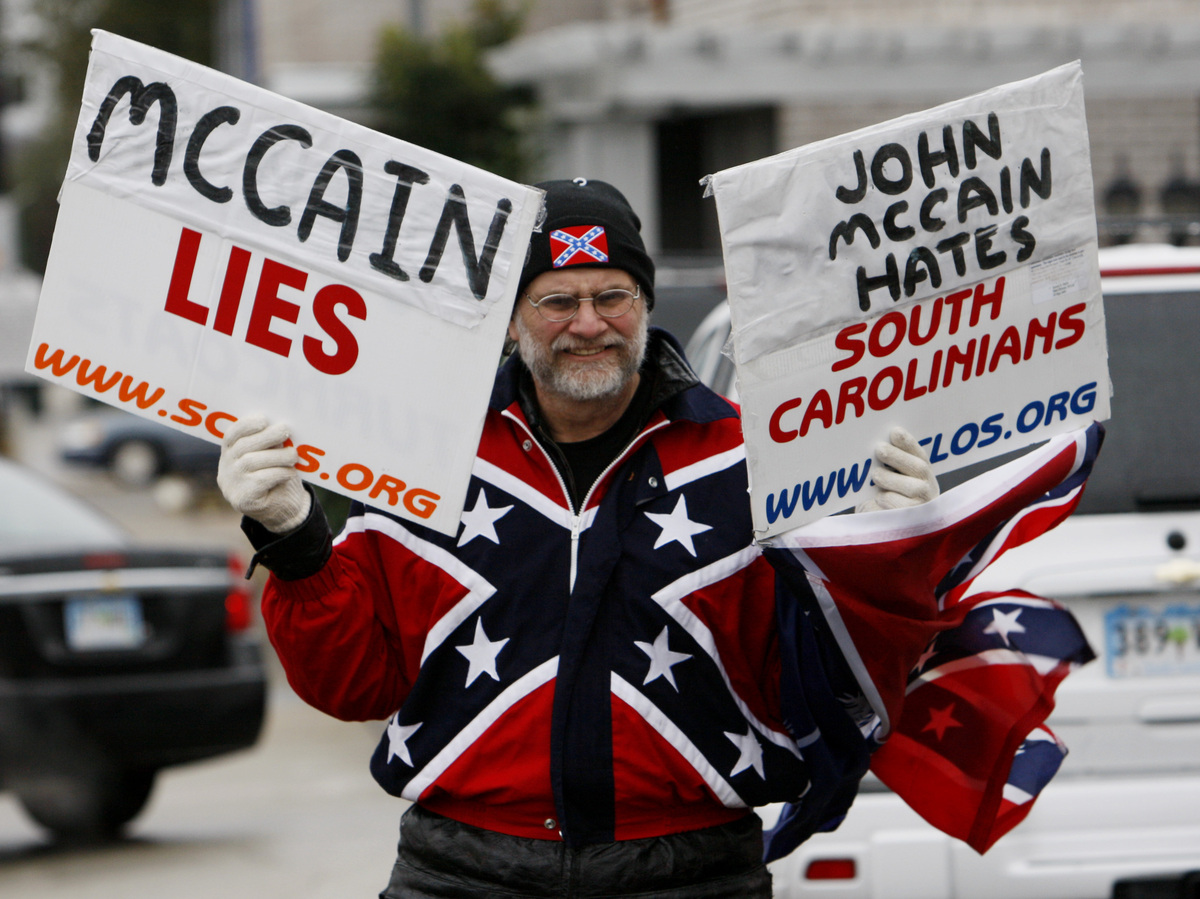 Arizona Sen. John McCain regretted not taking a clearer stand against the flag in the 2000 GOP presidential primary. When he ran again in 2008, some in the state didn't forget his change of heart.

In 2000, a compromise was reached to remove the flag from the top of the capitol dome and put it in front of the state House instead. In that year's primary, White House hopefuls were pressed on the issue. Arizona Sen. John McCain, who went on to suffer a fatal loss there, was torn. He personally opposed it, but fearing political repercussions, backed the flag. In 2008, he said he regretted it.

"I knew that it was a symbol that was very offensive to many people, and afterwards I went back and apologized. But by saying that I wouldn't have anything to do with an issue like that was an act of cowardice," McCain said.

Now, being able to largely avoid the issue is a sigh of relief for Republicans.

"I think if you're a presidential candidate, you've got to be eternally grateful that this thing is down, because it should not have to haunt them in years in the future," said Danielle Vinson, a professor of political science at Furman University in Greenville.

Charleston GOP Chairman Larry Kobrovsky argued that, as long as the flag kept flying, the national stereotype of South Carolina as closed-minded and non-diverse was reinforced. But he pointed out it was Haley, an Indian-American, and South Carolina Sen. Tim Scott, the only African-American Republican in the Senate, who led the charge.

"It changes the perception of the state," Kobrovsky said, adding he believes the flag won't be an issue in primaries any longer.

But for some voters, they worry removing the Confederate flag is only the first step in removing other memorials or buildings named after Confederate generals or soldiers.

"You open the door to one thing that's offensive to somebody. And now all the doors are open to other people. So, where does it end?" Mike Bean of York wondered at a Walker event in Mauldin.

Leona Crouch of Greenville admitted it was probably time for the flag to go but maintained it wasn't an offensive symbol. 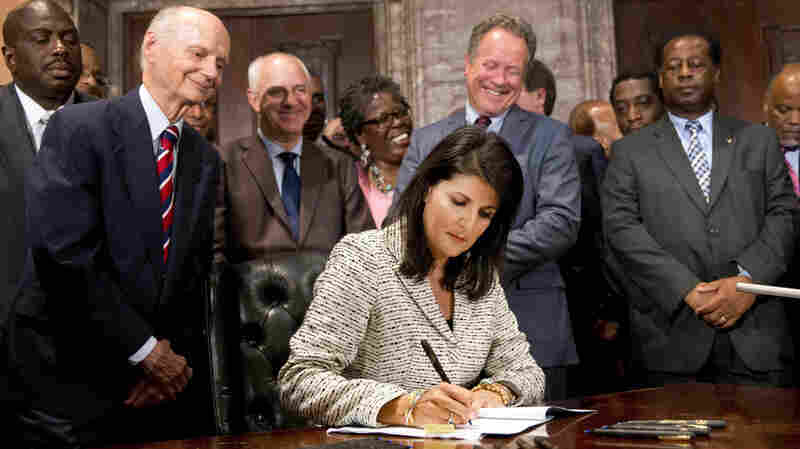 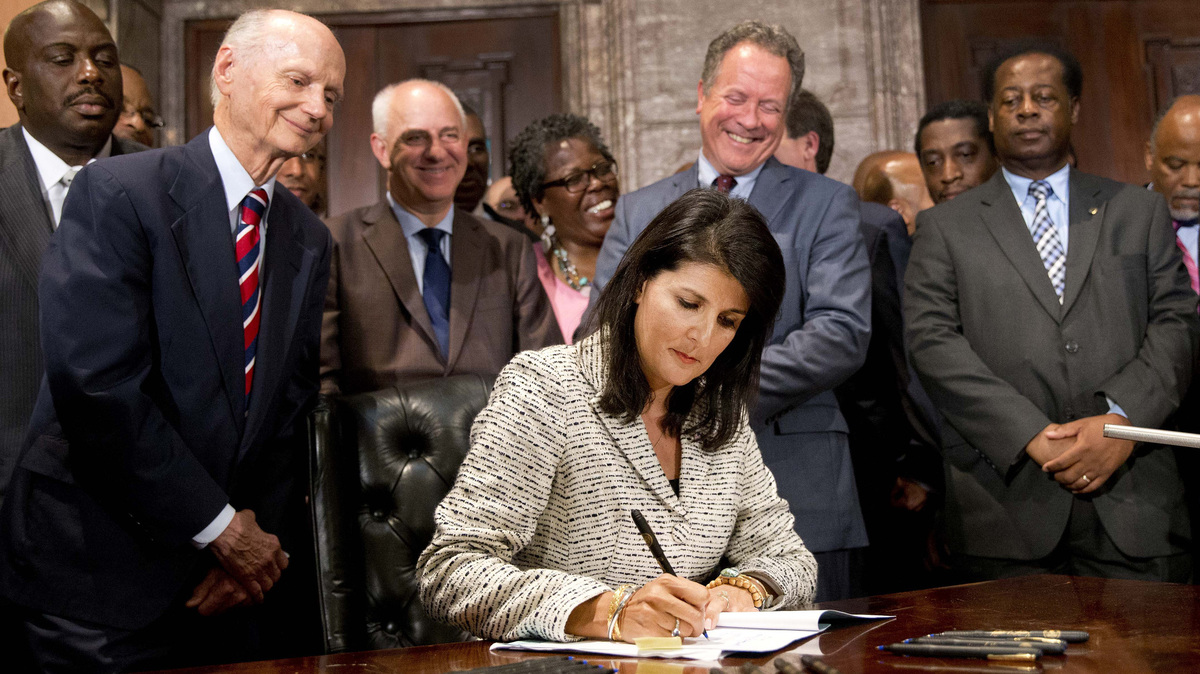 South Carolina Gov. Nikki Haley signs a bill to remove the Confederate flag from the State House grounds into law as former South Carolina governors and officials look on.

Others who think the legislature did the right thing also worry it's now a slippery slope.

"I think the flag should've come down off of there, but I think that's it. We don't want to go out there and start taking statues down," said Sam Kirton of Charleston.

The good news for Republicans: the South Carolina House speaker has said the legislature won't take up changing any other public Civil War memorials, monuments and the like.

But if a push to change those memorials does somehow become a flashpoint in the GOP primary, Vinson, said candidates have a new license to steer clear of the issue in a way they didn't have in years past.

"Even those that think it might be an issue they'd want to tackle, probably can sidestep it by saying 'It's a state decision,'" said Vinson.