Accessibility links
Most of Donald Trump's Political Money Went To Democrats — Until 5 Years Ago : It's All Politics The man making a strong showing for the GOP presidential nomination also has a remarkably inconsistent track record as a conservative. 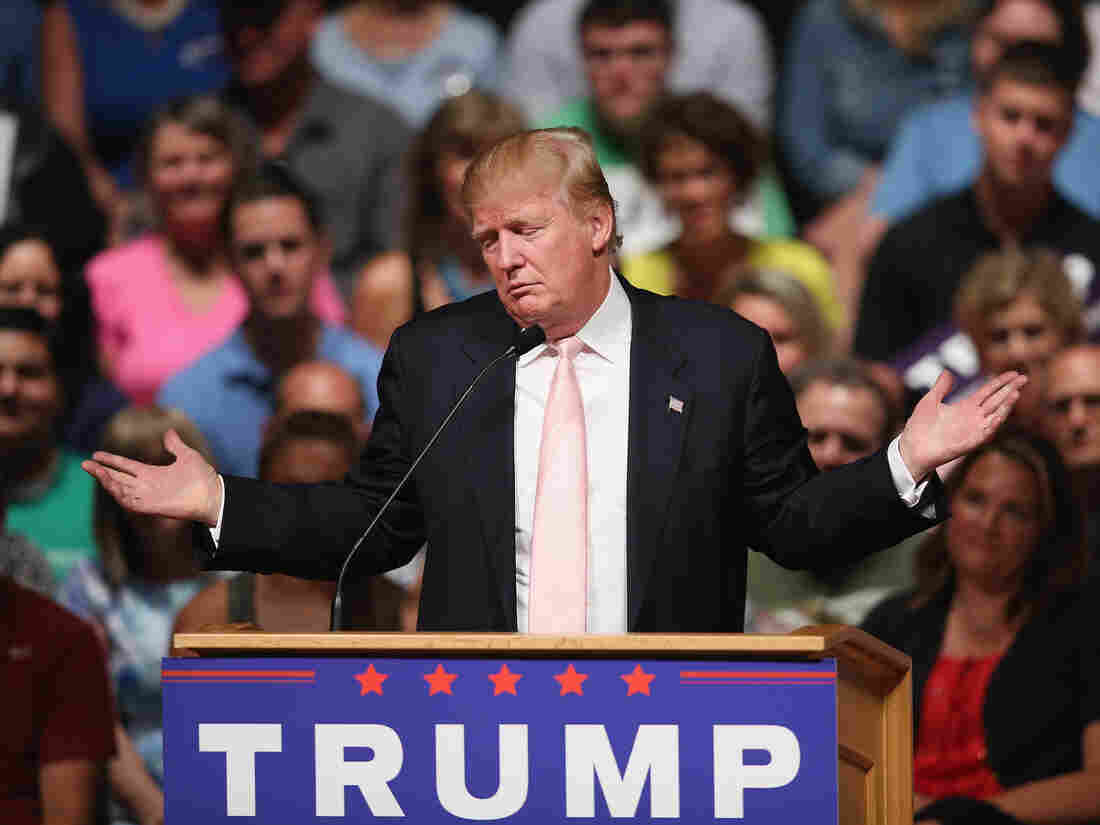 As of 2004, Trump told CNN he was more Democrat than Republican. So why doesn't this upset potential GOP primary voters? Scott Olson/Getty Images hide caption 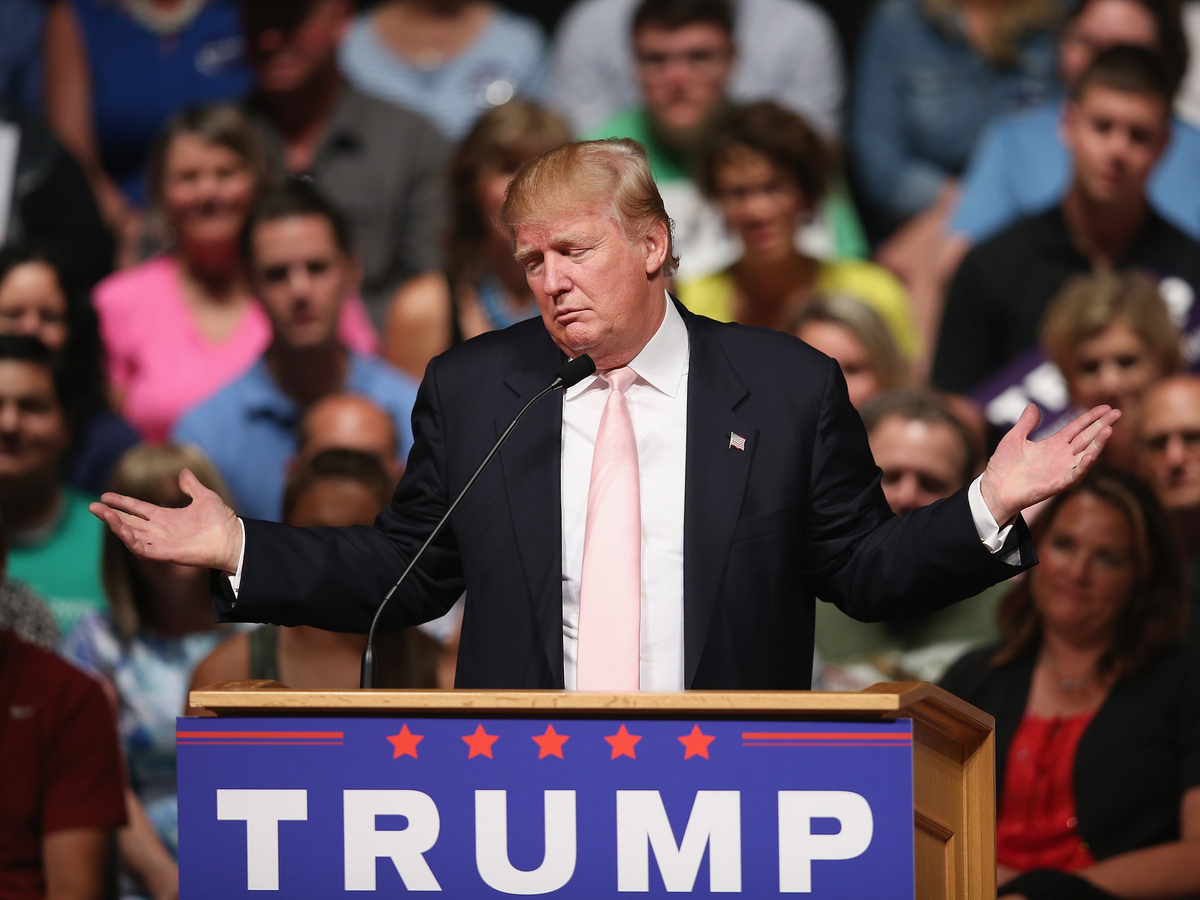 As of 2004, Trump told CNN he was more Democrat than Republican. So why doesn't this upset potential GOP primary voters?

"Well, if I ever ran for office, I'd do better as a Democrat than as a Republican," Donald Trump told Playboy in 1990. "And that's not because I'd be more liberal, because I'm conservative. But the working guy would elect me. He likes me."

It turns out that even The Donald can't predict the future — after all, 25 years after that comment, he's mounting a strong early push for the Republican presidential nomination. And while he framed himself as a conservative back then, his sympathies and political views have been all over the map during the last 25 years. Only in the last few years has he seemed to find some cohesive ground in what he thinks and whom he supports.

His political donations provide an objective look at just how big this change has been: Since 1989, donations in Donald Trump's name have totaled around $1.4 million (adjusted for inflation) to national-level parties, candidates, and other committees. Around two-thirds of that has gone to Republican groups and candidates, according to an NPR analysis of data from the Center for Responsive Politics. However, Trump's decisive tilt toward giving to Republicans has only come in the last few years.

(That grey bar in 1999 comes from when Trump donated $50,000 to the "Donald Trump New York Delegate Committee — a committee to which he was the sole listed donor, per CRP.)

It's true that this data might not even reflect all of his donations to super PACs, to which donations can be anonymous. But it does indicate a sharp pivot toward supporting Republicans. That's perhaps even more pronounced when you consider the share of his total giving by party. Between 2010 and 2015, 97 percent of all of his donations have gone to Republicans. Prior to that, Democrats had been the primary beneficiaries, taking more than half of Trump's donations between 1989 and 2009.

There are a couple of narratives you could draw from these numbers. One is that Trump had a conservative conversion moment of sorts and immediately changed his views (and donation patterns) accordingly.

As a businessman, you wanna be friendly with everybody.

Or, perhaps, he was simply seeking to grow (or, more accurately, buy) influence among Republicans. In 2011, campaign finance watchdog Center for Responsive Politics conducted a similar breakdown of his donation numbers. But since then, the numbers have grown even more telling, as his donations have exploded — more than 40 percent of his nearly $1.4 million in donations have come since 2010. The breadth of those donations is huge, too — in 2014 alone, for example, Trump gave to 34 Republican politicians.

The turnaround in Trump's donation habits has come alongside a few rapid turnarounds in political views, as Politico's Timothy Noah wrote in a Monday analysis. He at various times has voiced support of single-payer health care, a 14.25 percent wealth tax, and an assault weapons ban — all positions that he has reversed. In addition, in 1999, he proclaimed Republicans "too crazy right."

Aside from those prominent flipflops, he has also held views that would likely anger many of today's orthodox conservative voters. For example, he told the Miami Herald in 1990 that drug legalization was the way to deal with drug violence.

"We're losing badly the war on drugs," Trump told reporter Gus Carlson. "You have to legalize drugs to win that war. You have to take the profit away from these drug czars."

Likewise, in that 1990 Playboy article, he demurred on the topic of abortion: "When I asked for his stand on abortion, he frowned, pouted and asked me to turn the recorder off," wrote Glenn Paskin. "He didn't really have an opinion — what the hell was mine? It was a very human moment."

And in 2004, he told CNN that he simply didn't see himself as a Republican.

"In many cases, I probably identify more as Democrat," Trump told Wolf Blitzer at the time. "It just seems that the economy does better under the Democrats than the Republicans."

To be clear, people's opinions on any number of political topics can and do change over time. But being branded a "flip-flopper" can be politically toxic — just ask John Kerry, the 2004 Democratic nominee who suffered when Republicans gave him that title. And Trump's changes of heart have been manifold and well-documented.

So why haven't voters punished Trump for this? How is the man leading in several GOP polls also among the least consistent conservatives in the race?

Part of it might be that voters are in a state of information overload — particularly on the subject of Donald Trump.

"They're getting overwhelmed with a bunch of statements about him, and if it's true or not true, they're not sure. They're just hearing a lot," said Republican strategist David Winston.

In Winston's view, the first stage of the Trump campaign came when he burst onto the scene with a volley of outrageous and provocative statements. This current part, when voters are trying to sort out just what's what, is the second stage, in his view. The third stage, he said, will come when voters figure out what's fact and fiction and synthesize their view of who Trump is as a candidate.

But for now, that's tough to do, because Trump's strategy is to spit out provocative statements, rapid-fire, whipping his supporters into a frenzy, said another GOP strategist.

"What he does is he takes page six tabloid tactics to presidential politics and not only do his opponents not know what to do with him; neither does the media," said Ford O'Connell.

O'Connell pointed to Trump's claim that veterans are being treated worse than illegal immigrants — a comparison that O'Connell said is not completely logical but manages to link together two things that infuriate some voters.

"What he does is he throws that word salad out there, and the voter goes gaga," O'Connell adds. "And before you can even break that down for the reader or the news anchor, he then moves on to something else. He's such a whirling dervish of stuff that you just don't know which way to go."

Amid that word salad that O'Connell is talking about, Trump has found time to shrug off criticisms of his past donations, defending them as a business necessity: "I am a businessman," Trump told conservative talk radio host Howie Carr recently, as reported by Buzzfeed. "And when, you know, a speaker of the House or head of the Senate or, you know, people call, you know, I generally speak. As a businessman, you wanna be friendly with everybody."

One key event coming up could help voters cut through the noise and figure out how they feel about him: the Republican debate on August 6. As a frontrunner in the polls, Trump is certain to have a spot on the stage. And facing off against nine other GOP candidates, Americans might just get a better sense not only of whether to vote for him, but who he even is.