Accessibility links
Could President Obama Win A Third Term? : It's All Politics Four U.S. presidents have completed a second term since that became the limit, and three of them might well have had a shot at winning again: Dwight Eisenhower, Ronald Reagan and Bill Clinton. 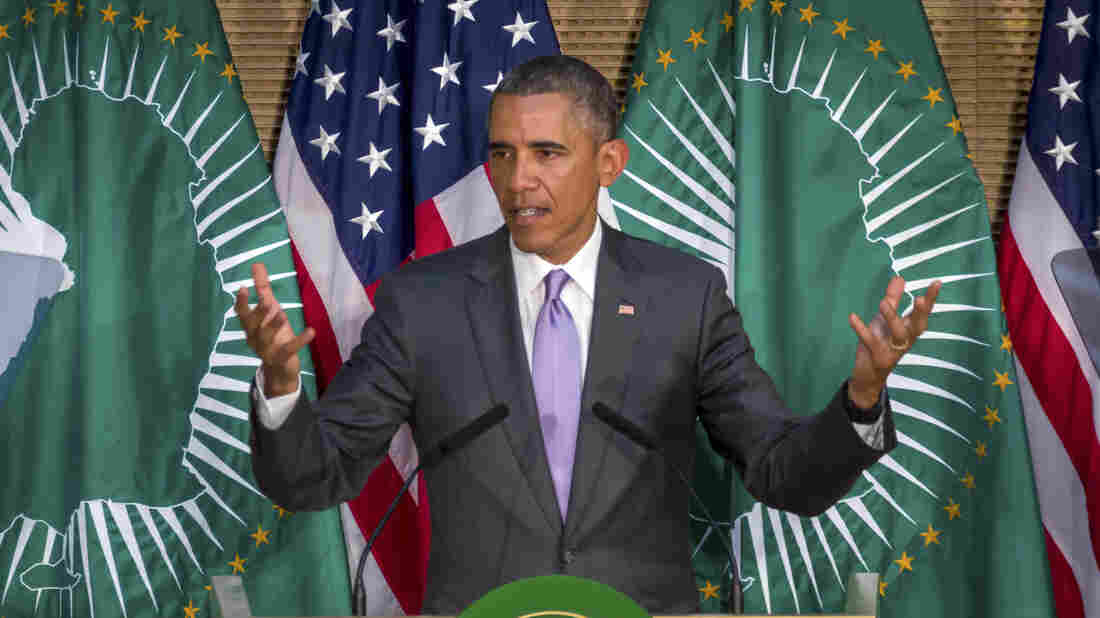 President Obama speaks in Ethiopia. While there, he noted that in the U.S., presidents can't run for more than two terms. But if they could, he said, he'd win. Mulugeta Ayene/AP hide caption 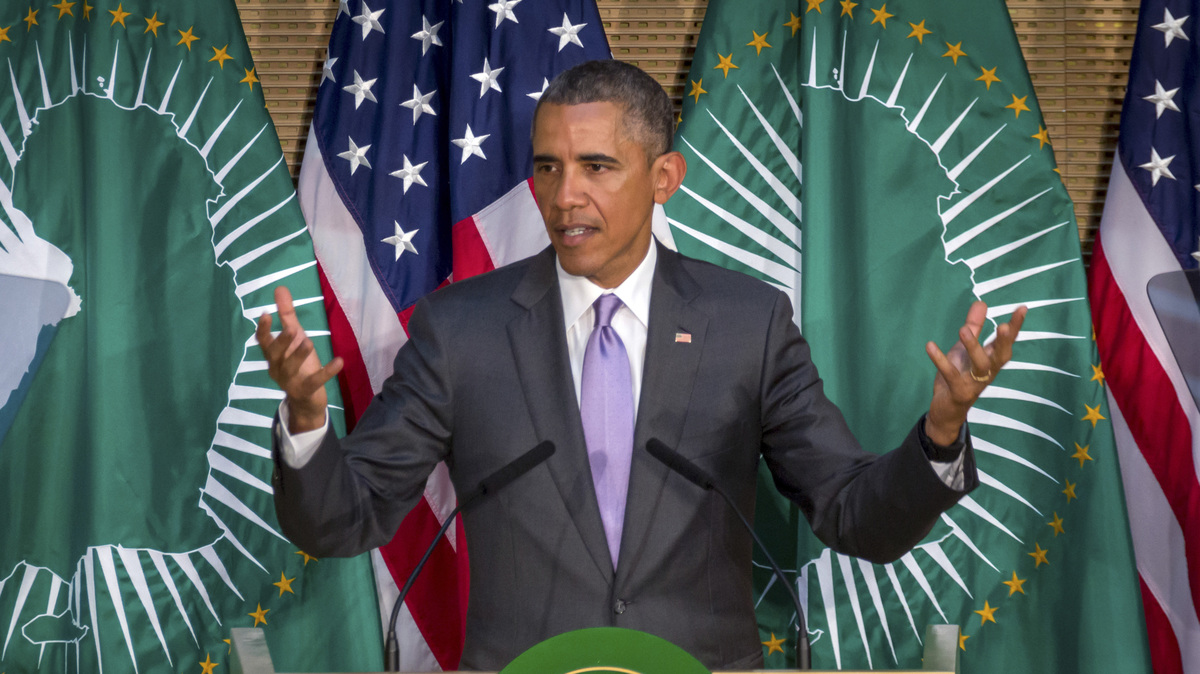 President Obama speaks in Ethiopia. While there, he noted that in the U.S., presidents can't run for more than two terms. But if they could, he said, he'd win.

President Obama was giving the final speech of his Africa tour, offering a critique of the young democracies on that continent, singling out the all-too-typical practice of leaders overstaying their terms in office.

"When a leader tries to change the rules in the middle of the game just to stay in office, it risks instability and strife," Obama said, aware that the president of Burundi, seated nearby, had recently defied that country's two-term limit.

Obama pointed to the shining example of Nelson Mandela, the first black president of South Africa, who left office on schedule and transferred power peacefully.

Obama also pointed to himself.

"I actually think I'm a pretty good president," he said with a smile. "I think if I ran I could win. But I can't. ... The law is the law, and no one person is above the law, not even the president."

The law the president mentioned is the 22nd Amendment to the U.S. Constitution, limiting a president to two terms. It was ratified in 1951, in a kind of delayed reaction to the epochal presidency of Franklin D. Roosevelt, who won his fourth term in 1944.

I actually think I'm a pretty good president. I think if I ran I could win. But I can't. ... The law is the law, and no one person is above the law, not even the president.

Obama was talking about African leaders, but back in the States, that context was often lost in heated reactions to his claim to re-electability.

The very idea ignited digital high dudgeon. News websites featuring the story were soon festooned with endless reader comments, many interpreting Obama's statement as a dark hint that he plans to do just what he was denouncing.

Wrote one commenter identified as "Snowleopard" on The Blaze: "Honestly, I expect that Obama will find some excuse to nullify the next elections, and declare himself as President for Life ... "

"Sargeking" heard much the same message: "He has ignored our Constitution from day one since 2008, why should he amend his ways now? In fact, I harbor the thought that he's waiting for some major event that will posture him in a 'holdover' for the duration."

Some commenters worried about Obama finagling a third term by some back-door maneuver, such as having first lady Michelle Obama run for president — or perhaps by becoming vice president to a President Joe Biden.

But even those who do not imagine a palace coup in the making might well dispute the president's boast about winning again.

A third term, really? With all the controversy over Obamacare and the Iran deal and executive orders on immigration? With an approval number that's nearly always below 50 percent, and other measures of the national mood lukewarm at best?

Well, it's an exercise in pure speculation. But it is a question with real relevance for Hillary Clinton, or whomever the Democrats wind up nominating. Because that nominee will inevitably be said to be running for "Obama's third term."

Let's say you combine three polling numbers: the president's job-approval ratings, the national "right direction-wrong track" score and the "generic ballot" for Congress (a choice between the parties). Obama's standing by these data points right now is about where it was in the summer of 2012, less than six months before he swamped Mitt Romney in the Electoral College.

The difference is, of course, that when you go from polling to an actual election, you run against an actual opponent. And the question of re-election becomes: "Compared to what?"

That thought weighed on blogger Aaron Goldstein on the conservative The American Spectator's website. While dreading the thought of another Obama term, Goldstein wasn't sure the voters would agree.

"Say what you will about Obama," Goldstein wrote. "The man knows how to run a campaign, at least when he is at the center of it. Sure he has a lot of help from a sympathetic and sycophantic media. But Obama and his team ... know how to make the other guy ... the issue."

Goldstein shakes his head over the performance of Romney (and John McCain in 2008), and he doubts most of the 2016 contenders as well (making an exception for Scott Walker).

Four U.S. presidents have completed a second term since that became the limit, and three of them might well have had a shot at winning again: Dwight Eisenhower, Ronald Reagan and Bill Clinton.

Eisenhower was still popular in 1960, despite ill health, and his vice president (Richard Nixon) came within a whisker of succeeding him that year. Reagan almost certainly would have been re-elected in 1988, when his vice president (George H.W. Bush) did, in fact, win.

Clinton in 2000 had survived impeachment and ridden good economic times to an approval rating well over 60 percent. Sure enough, his vice president (Al Gore) won the popular vote for president that year by half a million votes (while losing the Electoral College by one state).

In each of those three elections, the crucial element was the nominee offered up by the party out of power. For many voters, those nominees helped make the prospect of a third term for the retiring incumbent look pretty good.

One thing to bear in mind: If it were possible for Obama to run again, he would presumably benefit from the continuing shift in voter demographics. Since Reagan's first victory in 1980, the percentage of the presidential vote cast by non-Hispanic whites has fallen from about 90 to 72 percent — or about 2 percent on average in each election.

That is a big reason why Republicans have won the popular vote only once in the past six presidential cycles. Assuming this change in the electorate continues apace, the Obama of 2016 would start with an even greater edge than the Obama of 2008 or 2012.

So count Obama out in 2016, because the Constitution says no. Even if the voters might not.