Accessibility links
Planned Parenthood Controversy Proves Complicated For Democrats : It's All Politics Several Republican candidates denounced Planned Parenthood at a rally in Washington this week after a series of sting videos were released. But it's a trickier issue for Democrats. 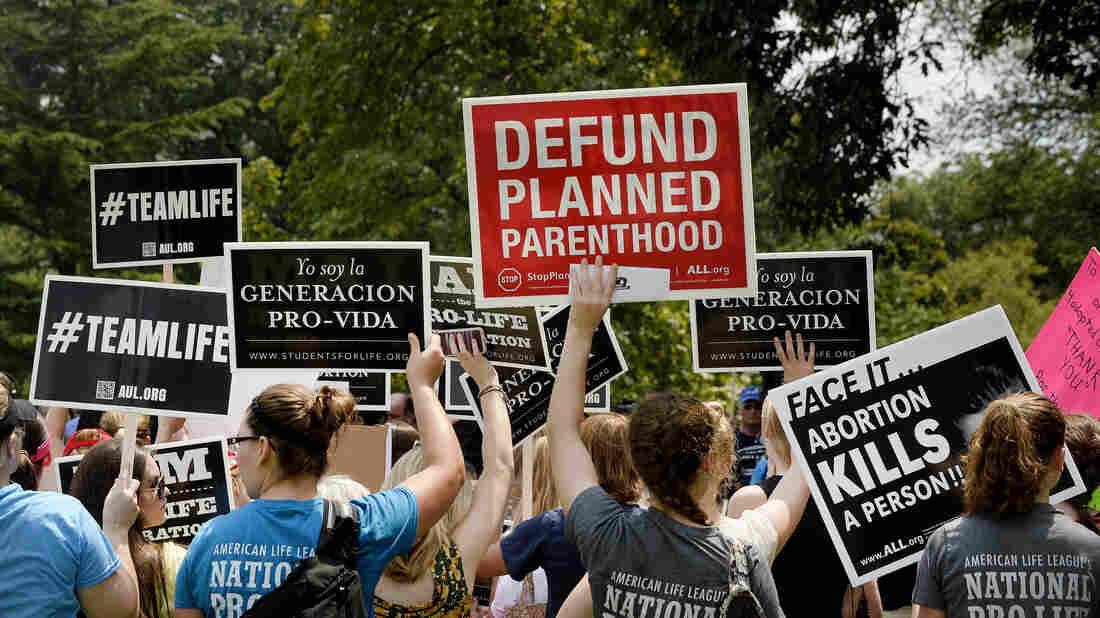 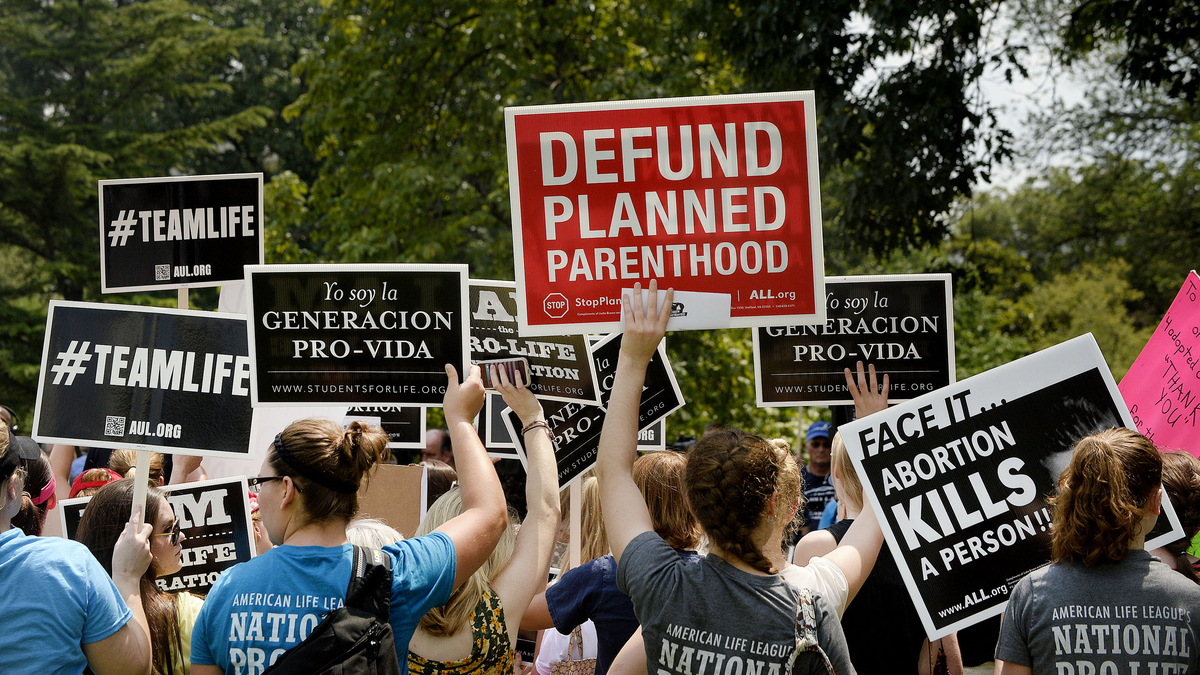 Anti-abortion activists held a rally opposing federal funding for Planned Parenthood in front of the U.S. Capitol on Tuesday.

The latest in a series of undercover sting videos features a woman who says she worked for a company that harvested organs from fetuses aborted at Planned Parenthood.

Planned Parenthood leaders say the videos are heavily edited and that they're not making money from facilitating fetal tissue donation for medical research. But the controversy over the videos is becoming a campaign issue — for both Democrats and Republicans.

At an anti-Planned Parenthood rally outside the U.S. Capitol on Tuesday, Kentucky senator and GOP presidential hopeful Rand Paul referred to a video released earlier this month by the anti-abortion Center for Medical Progress. It shows a Planned Parenthood doctor meeting over lunch with activists posing as representatives of a company that handles fetal tissue donations. 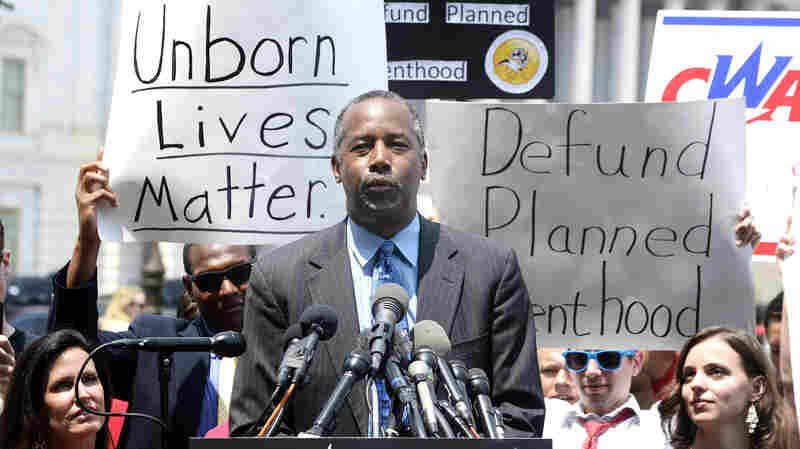 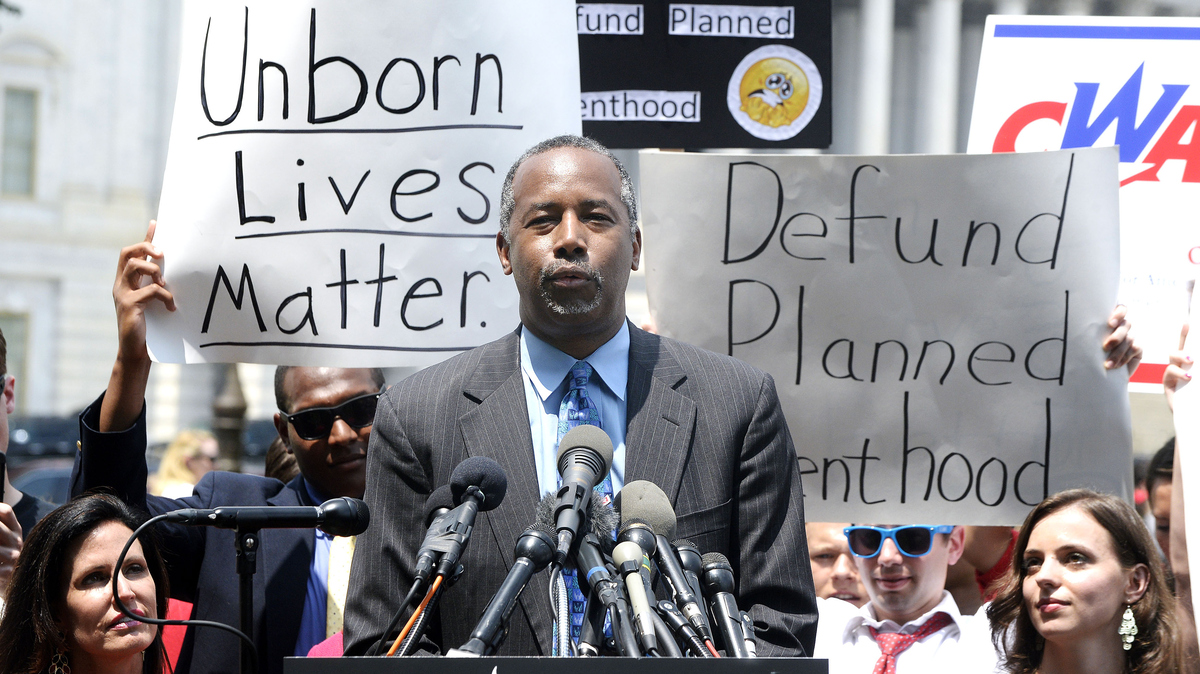 "This callous disregard expressed over wine and cheese should inflame and infuriate us all, and we should stop once and for all any penny of money going to Planned Parenthood," Paul said.

Paul is proposing legislation to cut funds to Planned Parenthood. Federal funding for abortions already is illegal in most cases, but the organization receives public money for services like health screenings for low-income women.

Also taking the mic at the rally was Ben Carson, a retired neurosurgeon, and Sen. Ted Cruz of Texas. Cruz directed his jabs at the Democratic front-runner.

"I call upon our friends in the mainstream media to ask Hillary Clinton if she is pleased that she has so much passionate support from Planned Parenthood, an entity that appears to be a national criminal enterprise," Cruz said.

Planned Parenthood President Cecile Richards has insisted that the organization has broken no laws. She told ABC News this weekend that the videos are a product of a "three-year effort to entrap doctors."

"Planned Parenthood does not at all profit from fetal tissue donation, which is an important ... element of health care research in this country," Richards said.

As the videos have been released online, Clinton has largely defended Planned Parenthood as a longtime provider of health care for low-income women. At a campaign stop in South Carolina on July 23, Clinton said the attacks on the organization are an attack on women's constitutional right to an abortion.

"I think it is unfortunate that Planned Parenthood has been the object of such a concerted attack for so many years," she said.

After a third sting video was released Tuesday, Clinton said in an interview with the New Hampshire Union Leader newspaper that she had seen pictures from the videos and found them "disturbing," but reiterated her support for Planned Parenthood's record as a provider of family planning and health services.

Other Democratic presidential hopefuls didn't exactly race to defend the organization. Vermont Sen. Bernie Sanders has said that Richards was right to apologize for the "tone" of a Planned Parenthood doctor featured in one of the videos.

Later Wednesday, after our initial report, Sanders defended the organization in a post on his Senate Facebook page and press release. "The current attempt to discredit Planned Parenthood is part of a long-term smear campaign by people who want to deny women in this country the right to control their own bodies," he wrote.

It's a tricky issue for the left, says political scientist Rachel Caufield of Drake University in Des Moines.

"It creates an environment where the pro-choice supporters have to be in a position to justify some of the practices of Planned Parenthood," she said. "[Sanders] took a more measured tone and was less willing to defend Planned Parenthood outright, [and] recognized that this is not a practice that Americans are accustomed to hearing about and not something that they're particularly comfortable with."

Regardless, Americans are going to hear more about it. Paul has promised that the Senate will take up his proposal to defund Planned Parenthood before leaving for the August recess. The issue also is likely to come up in next week's Republican debate in Cleveland.