Accessibility links
Can Donald Trump Build A Campaign To Last? : It's All Politics Veteran strategists say that while Trump has staffed up in early states, the Republican is missing the long-term campaign infrastructure and approach to go the distance.

Can Donald Trump Build A Campaign To Last?

Can Donald Trump Build A Campaign To Last? 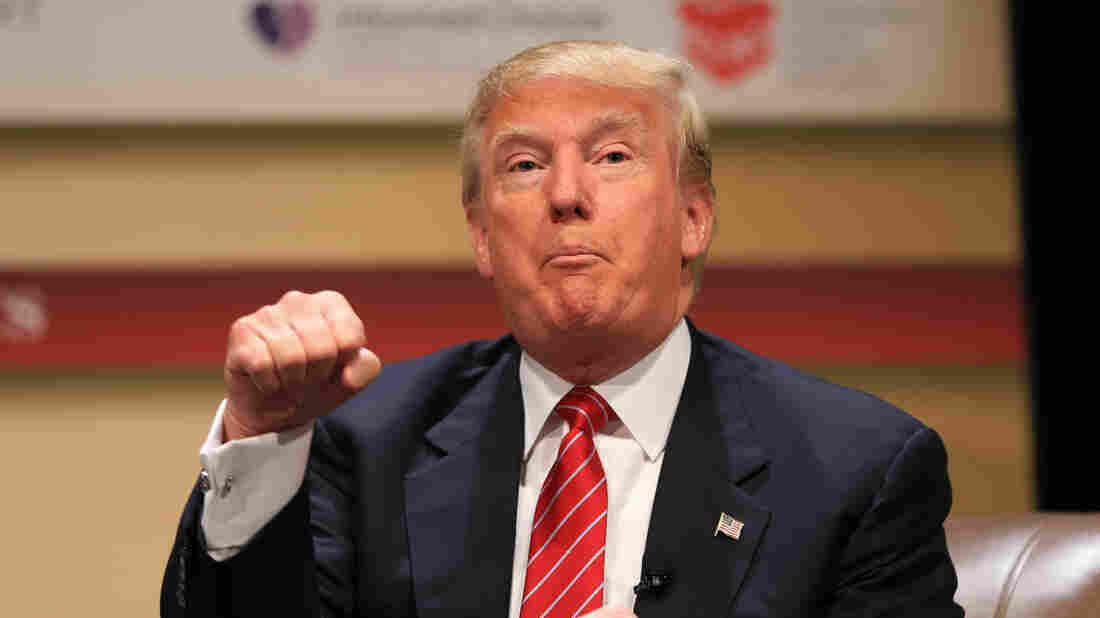 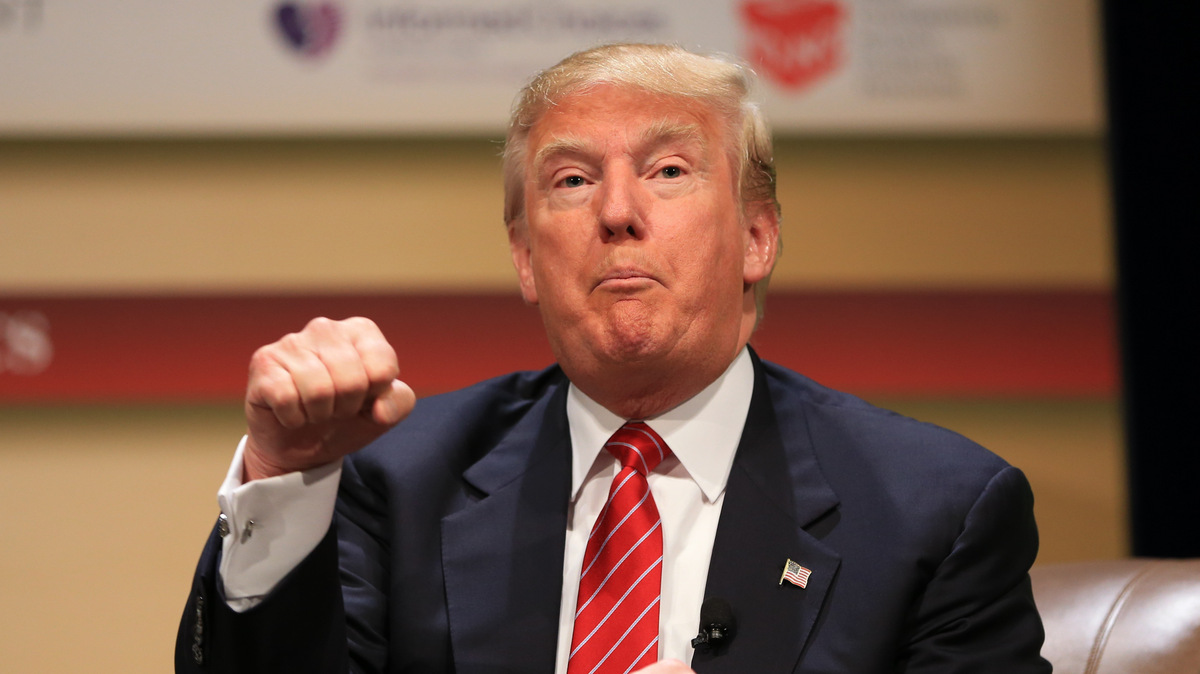 Donald Trump may be good at building things — hotels, wineries, golf courses — but his biggest challenge may be to create a lasting campaign for president.

Despite — or perhaps because of — his bluster and controversial comments, Trump is leading in national and many early state polls. But longtime White House campaign veterans are skeptical he has an organization built for the long haul.

"The easiest thing in the world is to tell a pollster, 'I'm for that person,' " said Stuart Stevens, who was the chief strategist on Mitt Romney's 2012 presidential bid. "The hardest thing is to get that person to vote."

Right now, these veteran operatives say, Trump's strategy appears to be consolidating all the media attention around himself — and saying as many outrageous things as he can. That may have catapulted him to the top of the field for now, but it will take more than that to survive the debates and withstand more scrutiny into his background and business deals.

Trump has staffed up in early states, picking up some notable state strategists. But he doesn't have the high-powered consultants, veteran media teams or pollsters that are usually the bedrock of any successful campaign venture.

"He does have some professionals, but they don't sit all in the same place at the same headquarters," said Charlie Black, a longtime GOP strategist and veteran of several White House campaigns. Black also lobbied for Trump's businesses. 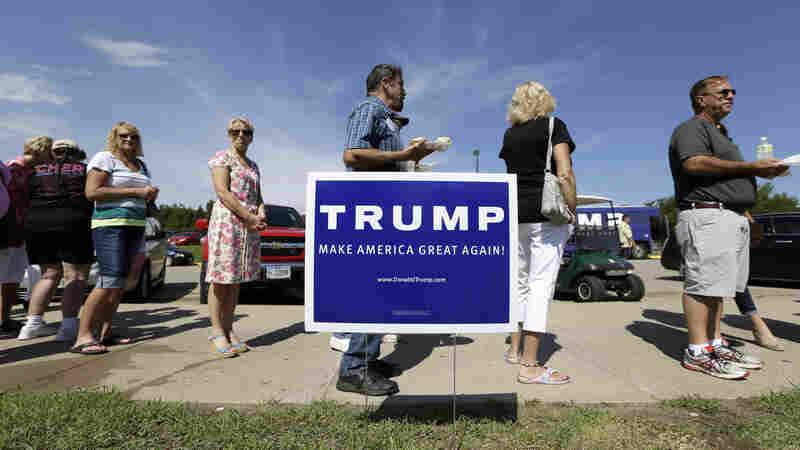 Donald Trump has staffed up in Iowa and New Hampshire but hasn't reached out to top party leaders and taken the typical campaign approach. Charlie Neibergall/AP hide caption 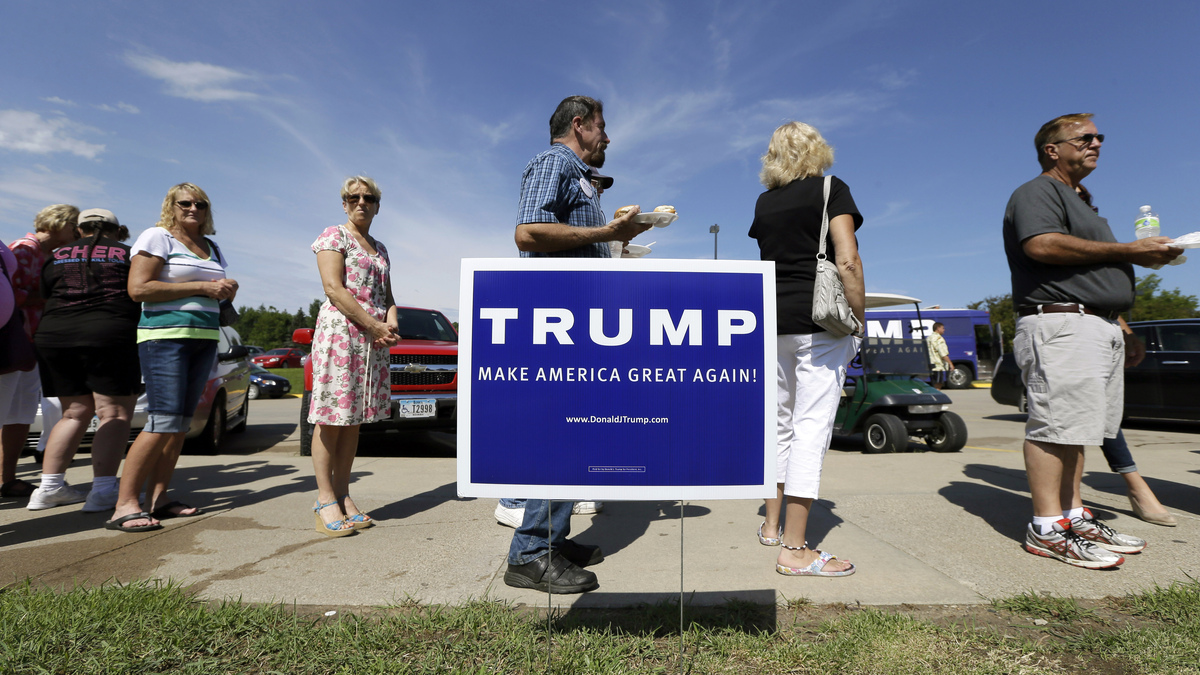 Donald Trump has staffed up in Iowa and New Hampshire but hasn't reached out to top party leaders and taken the typical campaign approach.

"And they have not built the kind of infrastructure that we ordinarily do in presidential campaigns. The whole campaign is just based on him. His traveling and speaking and radio appearances are, at this point, the whole campaign. They don't have a methodical, top-notch, professional get out the vote operation that I can see."

Trump hired Alan Cobb & Associates of Topeka, Kan., for strategy consulting, according to his second-quarter financial report file with the Federal Election Commission. Cobb was previously a lobbyist for Koch Industries and a state director of the Koch-funded Americans for Prosperity.

Trump is self-funding his campaign, so he has the resources to hire top-flight consultants. But few dyed-in-the-wool Republicans may be eager to sign on, fearing his impact on the field.

The one place that hasn't been true is in Iowa. Back in February, Trump snapped up Chuck Laudner to be his state director. It was an impressive hire. Laudner has a long resume that includes time as the executive director of the state party and former chief of staff to conservative Rep. Steve King. In 2012, Laudner engineered former Pennsylvania Sen. Rick Santorum's upset victory in the Iowa caucuses despite little money or resources. Santorum, of course, ran a shoe-leather campaign, traveling to all 99 Iowa counties.

Laudner won't have the same cash problem with Trump this time around — provided Trump, who is worth between $1 billion and $10 billion, is willing to spend. A Washington Post profile of Laudner last month detailed how he's tirelessly working to convert skeptics into believers who will turn out on caucus night.

It seems to be working in Iowa, at least for now. The latest polls have Trump surging to second place, some within the margin of error of first, nipping at the heels of caucus front-runner Scott Walker, the governor of Wisconsin.

In New Hampshire, Trump has skyrocketed to first place, doubling the support of his next-closest rival, former Florida Gov. Jeb Bush, in a recent Monmouth University poll, for example. Trump has a heavily staffed campaign there, also drawing talent from AFP, according to National Journal. (Ironically, Politico reported, "The Koch brothers are freezing out Donald Trump from their influential political operation — denying him access to their state-of-the-art data and refusing to let him speak to their gatherings of grass-roots activists or major donors." That includes a Koch network forum Sunday.)

Trump's campaign manager, Corey Lewandowski, hails from the Granite State and was AFP's state director there. A recent Politico profile described Lewandowski as someone who "has a knack for spectacle, an eye toward making money and a proven willingness to defy the Republican Party" — much like Trump.

On Thursday, they also announced the hiring of Michael Glassner as the campaign's national political director. He's a veteran of the George W. Bush and Bob Dole campaigns and also a top aide 2008 vice presidential nominee Sarah Palin during the campaign.

Lewandowski told NPR it was "fair to say we are running a bit of a different organization" than has been run in past White House campaigns, but that didn't mean they couldn't be successful. He pointed to Trump's continued rise in the polls as evidence their strategy is working.

"I can't speak to how other campaigns structure their organization, but if you look at the last two presidential campaigns that were run the same way, they were both unsuccessful," Lewandowski said. "So maybe its time to try something different."

Count former New Hampshire Republican Party Chairman Fergus Cullen among the skeptics that the Trump bubble has staying power — or that the field staff he's built will make a difference.

"I think he's got Potemkin organization at best," Cullen contended. "It looks like an organization from the outside, but it won't last," especially to go toe-to-toe with Democratic front-runner Hillary Clinton if he happens to win the nomination.

Of Trump's rise in the polls, Cullen attributed it to the reality TV star's celebrity and argued the glitz would wear off.

"They really need to test Tom Brady and Taylor Swift in all the polls to get a comparable number," he quipped.

And there are cracks starting to show in the Trump state operation. One of his county chairs, Raul Cervantes of Grafton County, told Politico he wasn't fully behind Trump after his disparaging comments in his kickoff about Mexican immigrants. He later recanted via a statement from the campaign.

One of the most high-profile clashes came this week when The Daily Beast published a story suggesting that Trump may have sexually abused his ex-wife, Ivana.

For her part, Ivana Trump denied the incident took place in a statement to CNN:

"I have recently read some comments attributed to me from nearly 30 years ago at a time of very high tension during my divorce from Donald. The story is totally without merit. Donald and I are the best of friends and together have raised three children that we love and are very proud of. I have nothing but fondness for Donald and wish him the best of luck on his campaign. Incidentally, I think he would make an incredible president."

The campaign strategy wasn't to put out a well-crafted statement or points to rebut the claims. Instead, longtime Trump confidante and attorney Michael Cohen unloaded on the reporters with expletives and personal threats. He later apologized.

CNN noted last week that Trump's unconventional approach on the campaign trail has played out behind the scenes, too. He hasn't been pressing the flesh of top Republicans in the states and has only barely reached out to the state party committees.

"He does seem to be taking it to the people, seems to be doing it primarily through the media. That's one strategy," Iowa GOP Chairman Jeff Kaufmann told CNN. "But I can tell you that you don't win the presidency that way, because you have to have the party organization and party apparatus and local party leaders to win the presidency."

Black agreed that eventually Trump's campaign would lose its luster without a rigid organization in place.

"He does things his own way and he calls the shots," Black said. "It would be hard to sustain a long primary campaign and a general election campaign in this manner, but that's just the way he does things."

Stevens was also skeptical the organization Trump appears to be building will even last until the primaries and caucuses begin.

"I think he could put together an organization if there was serious intent displayed, but I haven't seen that yet," said Stevens, who predicted Trump would grow bored and frustrated and wouldn't even make it until the first votes are cast on Feb. 1.

"I don't think we're going to be talking about him when we're waiting for votes to be counted in Iowa."