Accessibility links
Much Like Speed Dating, Republicans Try Their Best, Short Pitches : It's All Politics The crowded field of GOP presidential hopefuls got their first chance to face-off this week ahead of Thursday's first debate-- just not really against each other in any substantive fashion.

Much Like Speed Dating, Republicans Try Their Best, Short Pitches

Much Like Speed Dating, Republicans Try Their Best, Short Pitches 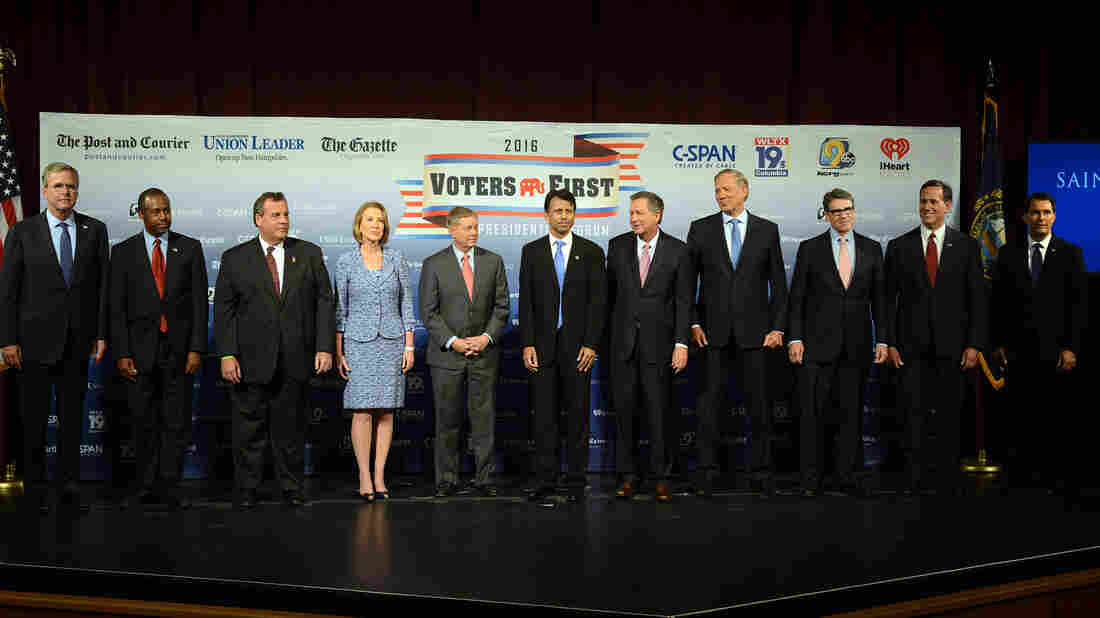 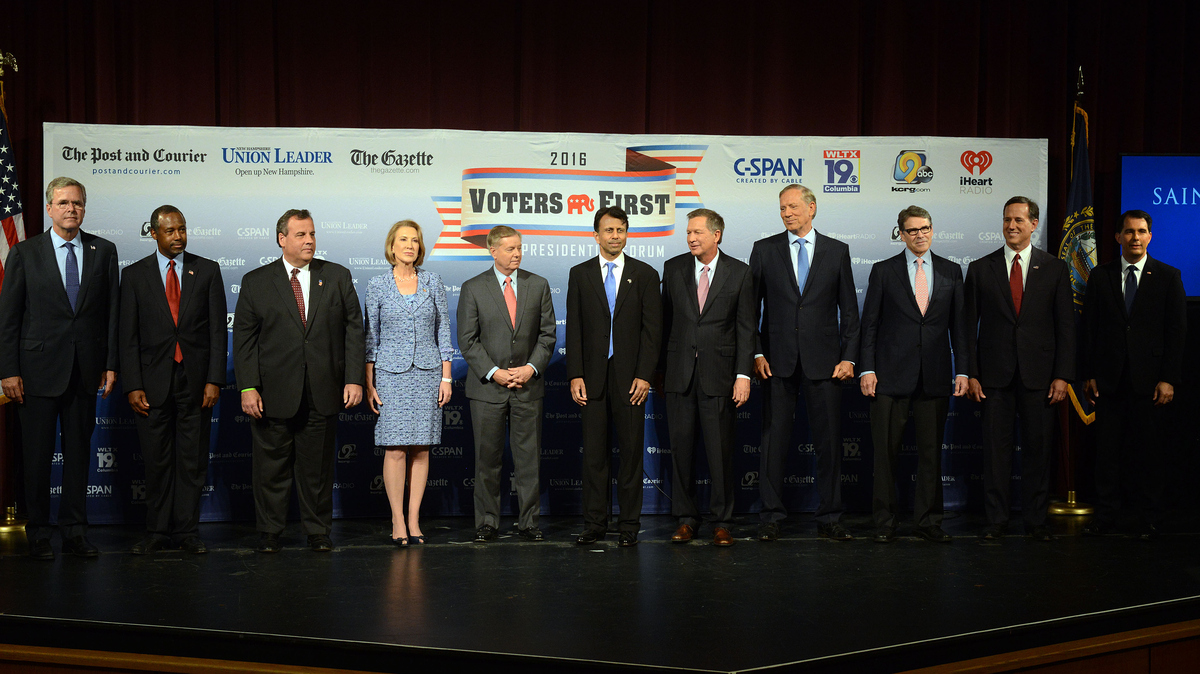 The crowded field of GOP presidential hopefuls got their first chance to face-off this week — just not really against each other.

The two-hour long rapid-fire interviews at the "Voters First Forum" in at St. Anselm College in Manchester, N.H., had the feel of a speed-dating session as the 14 Republicans in attendance fired off their talking points in what amounted to abbreviated stump speeches, hoping voters would want a second date.

For lower-tier candidates, it may be their only chance to appear with, or at least be back-to-back with, the rest of the field. When Fox News announces Tuesday who will make the cut for Thursday's prime-time debate – the first of this cycle – several will be relegated to a B-Team forum earlier that evening.

But perhaps the most important candidate on Monday night was the one who wasn't there — Donald Trump. The controversial billionaire real-estate magnate and current leader in the polls refused to participate in the forum because one of the sponsors, the influential New Hampshire Union Leader, had been critical of his candidacy.

Former Arkansas Gov. Mike Huckabee and former Virginia Gov. Jim Gilmore also did not attend. Joe McQuaid, the newspaper's publisher, told C-SPAN that Huckabee simply left him a voicemail saying he would not attend, and McQuaid added that he told Gilmore that he'd gotten in too late to make the cut.

For candidates who will make the main debate stage on Thursday, what voters saw on Tuesday night were snippets of their stump speech and talking points that went unchallenged by the moderator or other candidates. (The candidates were not allowed to challenge each other, based on the rules.)

Former Florida Gov. Jeb Bush said he was running, after a hiatus from public life, to restart the American economy and spur 4 percent economic growth, despite the skeptics.

"The fact that Paul Krugman disagrees with me warms my heart," Bush quipped.

Wisconsin Gov. Scott Walker painted himself as a "new, fresh face without a name from the past" and highlighted his experience as governor taking on organized labor.

Ohio Gov. John Kasich, who has risen enough in the polls since announcing his bid last month to likely make Thursday's debate, used the opportunity to remind voters he was the architect of the balanced budgets of the 1990s when he was in Congress.

"I've only written about 16 budgets in my lifetime," Kasich boasted. He was the House budget committee chairman.

Sens. Ted Cruz (Texas), Rand Paul (Ky.) and Marco Rubio (Fla.) had to appear via satellite since they were stuck in Washington for votes, and their exchanges at the time appeared halted and awkward because of time delays.

But each still kept to their campaign themes. Cruz defended his harsh rhetoric over President Obama's Iran deal, warning that if the accord passes, the Obama administration "will become the largest funder of state-sponsored terrorism."

"Let me tell you something: speaking the truth is not rhetoric," said Cruz.

The libertarian-leaning Paul pitched himself as a different type of Republican — but one who could compete with Democratic frontrunner Hillary Clinton in swing states.

"We haven't been wining, and if we try the same thing over again we're not going to win," said Paul.

And Rubio tackled immigration, and said that while he was once a chief sponsor of a comprehensive reform bill in the Senate, that with a demand for even legal immigration, such decisions should be on merit.

"We are the most generous country in the world when it comes to immigration," said Rubio.

Those in danger of not making the cut delivered some of the most forceful zingers to try to make their case. South Carolina Sen. Lindsey Graham, who is barely cracking 1 percent in most polls, had the line of the night, getting the most laughs, as he forcefully attacked Democratic frontrunner Hillary Clinton, painting her as untrustworthy.

"I've been dealing with this crowd for 20 years. I'm fluent in Clinton-speak: When Bill says he didn't have sex with that woman, he did," said Graham, who was one of the managers against Clinton's impeachment proceedings in 1998. Graham added, "When she says, 'Trust me, you've got all the emails you need,' we haven't even scratched the surface."

Former Texas Gov. Rick Perry promised he would take a tough hand on illegal immigration: "If you elect me president, I can promise you one thing: The will to secure that border will reside in the Oval Office."

Perry currently isn't in the top 10 for the main debate stage, even though his campaign has gotten positive reviews after he made an infamous stumble in 2011 when asked to name three government agencies he'd eliminate as president. Perry was asked the same question Monday night by moderator Jack Heath of WGIR radio again.

Former Hewlett-Packard CEO Carly Fiorina, the only woman in the Republican field, argued she would be the GOP's most effective attack dog against Clinton.

"In order to beat Hillary Clinton, we have to have a nominee on our side who is willing to throw every punch," she said.

But unlikely to make the main debate stage, Fiorina took a jab at the method of picking the top candidates.

"We don't have a national primary," Fiorina said, adding in a nod to McQuaid, "Thank you for managing to get these candidates to New Hampshire."