Accessibility links
Fact Check: How Does Planned Parenthood Spend That Government Money? : It's All Politics The government spends $500 million a year on Planned Parenthood. Here's where that money goes, where it comes from and how it's used. 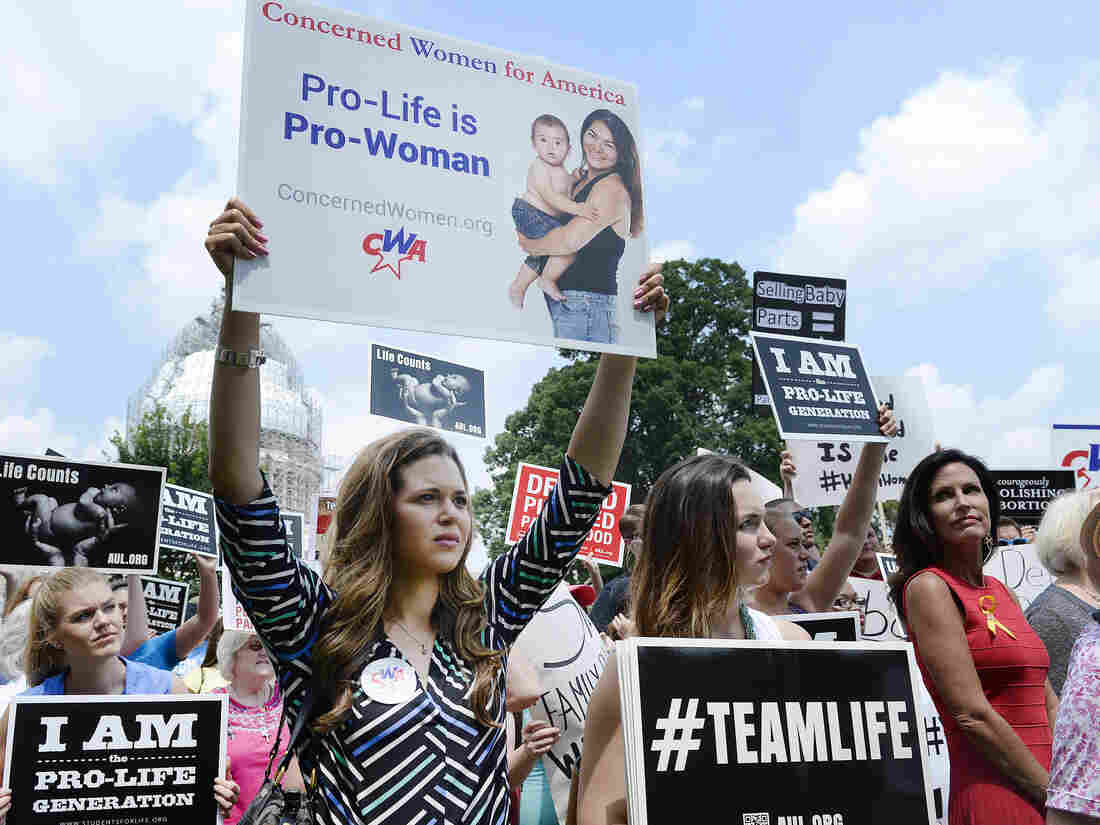 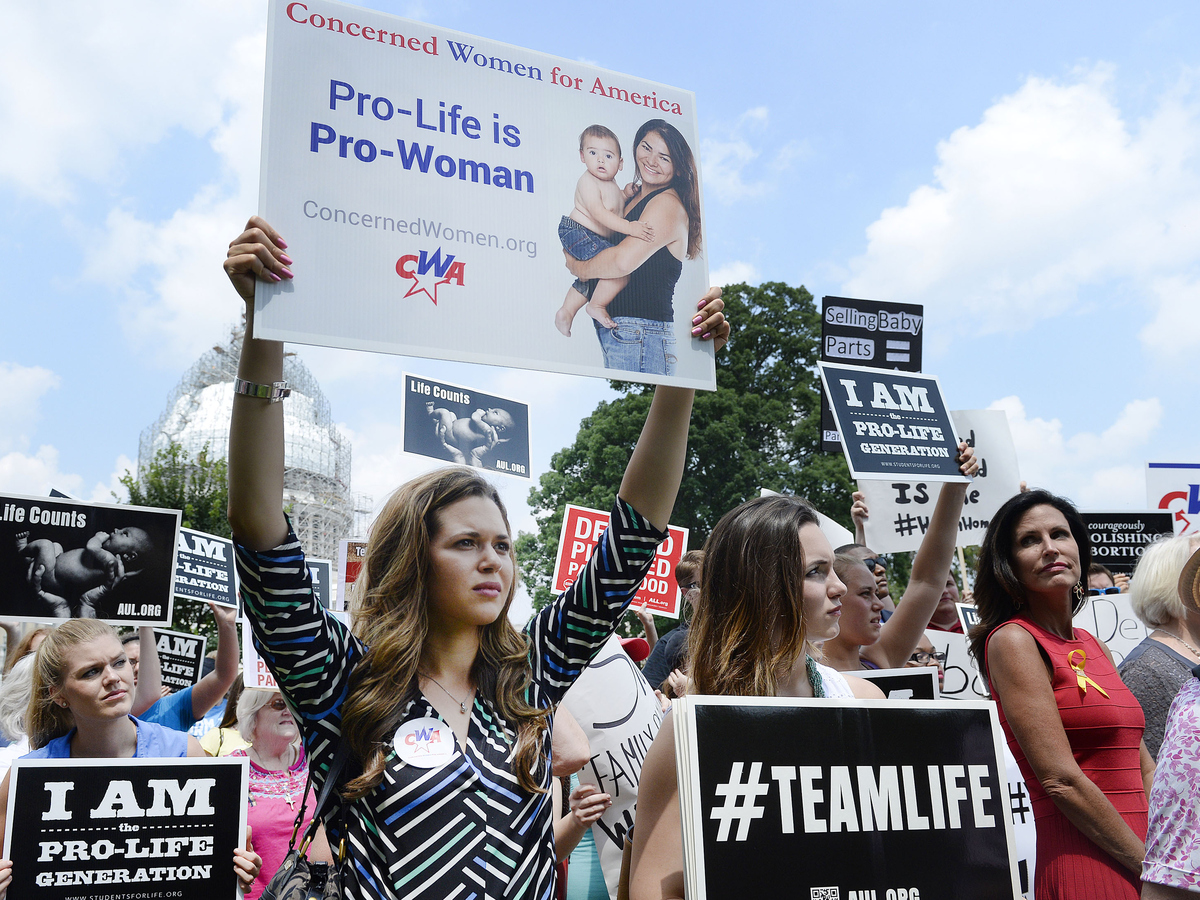 Anti-abortion activists hold a rally opposing federal funding for Planned Parenthood in front of the U.S. Capitol on July 28 in Washington, D.C.

Jeb Bush is again in damage-control mode, this time over an offhand remark he made about Planned Parenthood. He said at an event hosted by the Southern Baptist Convention that Planned Parenthood should be defunded, and he highlighted that he did so as governor of Florida.

He then added as an aside, "I'm not sure we need half-a-billion dollars for women's health issues" — a statement Hillary Clinton and other Democrats pounced on, portraying it as a gaffe that reveals that Bush doesn't care about women's health. He has since said he "misspoke."

But Bush's comments raise questions about just how much money Planned Parenthood actually gets, what the group does with it, and whether defunding it would actually save taxpayers money.

Planned Parenthood does receive a half-billion dollars a year from the government. But that's just one data point — here's what you need to know about where that money comes from and where it goes. 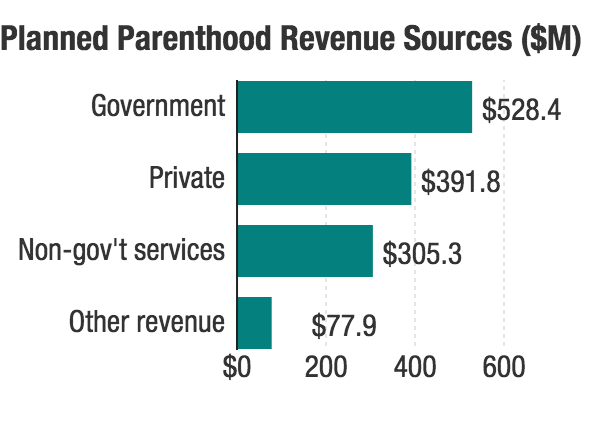 How much does the government pay to Planned Parenthood?

That totals more than 40 percent of Planned Parenthood's total $1.3 billion in revenue for the year, which suggests that the organization would be in some heavy financial trouble without that public funding.

What programs are funding that money?

Not all of the public funds Planned Parenthood receives are federal spending, however. While Title X is a federal program, Medicaid operates using federal and state funds. States receive a 90 percent federal reimbursement on Medicaid family planning spending, for example. So when Washington politicians talk about "defunding" Planned Parenthood, they generally mean cutting off federal money. States could continue to spend as they please.

How does Planned Parenthood actually use those government dollars?

Abortion is driving the defund-Planned-Parenthood discussion in the wake of undercover videos from the anti-abortion-rights Center for Medical Progress. The group says its videos show Planned Parenthood officials discussing the sale of fetal tissue and have sparked a political firestorm. Planned Parenthood, for its part, says it does not sell fetal tissue and claims these transactions were donations. 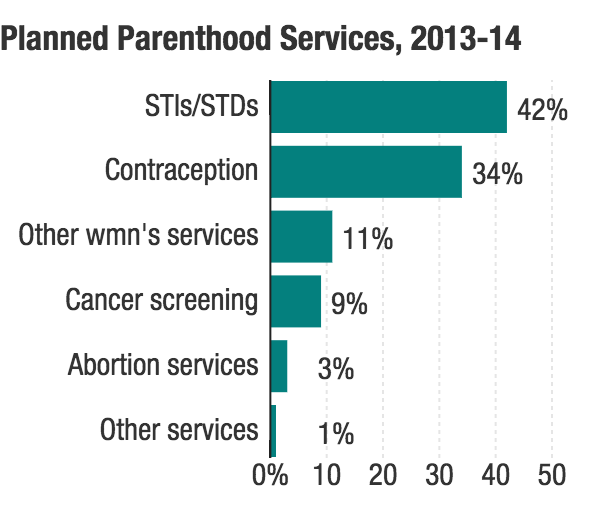 However, abortions are actually not a big part of what Planned Parenthood says it does — 3 percent of the services it provided last year were abortion-related, according to the organization's annual report. (For a sense of the scope of that, abortions accounted for about 328,000 of the group's nearly 10.6 million services provided last year.)

However, this 3 percent statistic has many critics, who point out, for example, that it doesn't explain how much of Planned Parenthood's revenue comes from abortion. Others note that the figure counts services provided, not patients served — and some patients receive more than one service from the organization. That means more than 3 percent of patients receive abortions (Politifact this week estimated the figure at around 12 percent, for example).

The overwhelming majority of Planned Parenthood's services involve screening for and treating sexually transmitted diseases and infections, as well as providing contraception.

Who goes to Planned Parenthood?

Title X and Medicaid are programs that target low- to middle-income Americans, and many of Planned Parenthood's patients are likewise lower-income. As of 2012, 79 percent of people receiving services from Planned Parenthood lived at 150 percent of the federal poverty level or lower (that comes out to around $18,500 for a single adult), according to a March Government Accountability Office report.

What does the law say on funding abortions?

Title X does not allow federal funds to be used for abortions. Medicaid, however, does allow government money to be spent on them — in very restricted cases.

The 1977 Hyde Amendment dictated that federal Medicaid funds could only be used to fund abortions in cases of rape, incest or to protect the life of the mother. However, some states have expanded cases in which they will provide funds. Currently, 17 states allow funds to be used for "medically necessary" abortions. In those cases that these states count as medically necessary but that are not permitted by the federal guidelines, states cover the cost alone.

What would it mean to "defund" Planned Parenthood and would it save taxpayers money?

Efforts to strip Planned Parenthood of public dollars go back decades, as Kaiser Health News' Julie Rovner wrote recently. The most recent attempt, known as S. 1881, would have stripped Planned Parenthood of federal funding and made it "available to other eligible entities to provide women's health care services." Senate Democrats, however, successfully blocked that bill this week.

Defunding the group might cut some spending and accomplish one Republican anti-abortion goal, but it could also backfire, as Congressional Budget Office Director Keith Hall wrote this week in a letter addressing S. 1881.

Though the CBO didn't do a full, formal analysis of the bill, Hall pointed out that while the bill could cut government spending, it could also increase it. While displacing Title X funding from Planned Parenthood to other clinics, the bill could have cut Medicaid spending as some beneficiaries might fail or decide not to seek out family planning services at other clinics. But on the other hand, it could have led to more spending (not to mention more unplanned pregnancies):

"CBO also expects that some of the services that would not be used if S. 1881 was enacted would include those that help women avert pregnancies and deliveries. Reduced use of such services would be expected to lead to additional births, increasing federal spending, primarily for Medicaid. In addition, some of those children would themselves qualify for Medicaid and possibly for other federal programs."

To be clear, the CBO didn't come to a firm conclusion on whether more or less spending is more likely.

However, it's important to remember that these bills could only cut federal funds. States could still spend money to help Medicaid consumers, for example, use Planned Parenthood services.

Of course, without federal reimbursement, it could make those services much more expensive for those states. Abortion-rights advocates also argue that redirecting funding to other clinics could limit lower-income Americans' access to family planning services, as other clinics may not have the capacity to handle the new customers, for example.

Updated Aug. 5, 10:20 p.m. This article was updated with additional information about Planned Parenthood's statistics on the number of abortions it provides.