In 'Happy Hour Debate,' Candidates Struggle To Break Through

In 'Happy Hour Debate,' Candidates Struggle To Break Through 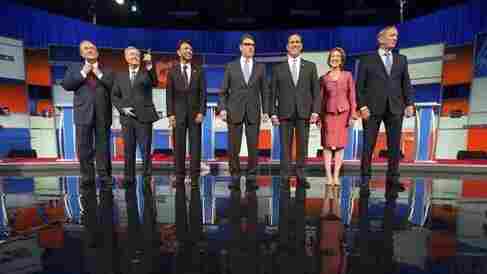 The biggest punches thrown at the first GOP presidential debate of the evening were at candidates not on the consolation debate stage.

First off the bat, Fox News moderators Bill Hemmer and Martha MacCallum asked candidates why the boisterous Trump was on the prime-time debate stage and they weren't. Many had been bitter over the polling methods used to determine who made the cut and who didn't. But others, like Fiorina and Graham, tried to put a happier spin on the evening, calling it the "Happy Hour Debate."

The whole nearly 90-minute event was more like a forum than a real debate — candidates mostly stuck to talking points and stump speeches.

Later, some took shots at former Florida Gov. Jeb Bush and Ohio Gov. John Kasich for not being conservative enough. But no one lobbed attacks at any of their rivals on the 5 p.m. stage.

And try as they might to draw criticism to their higher-polling rivals, right off the bat they had to answer their own weakness as well — why they had slipped in polling or not yet caught fire, and why some of them, with little to no name recognition, were even running.

Fiorina seemed to emerge the best from the debate, touting her business and foreign experience while taking jabs at Trump and Bush. She was leading on Google Trends after the debate, and Zignal Labs found in a real-time analysis that she was picked as the winner. While Fiorina has gotten rave reviews on the campaign trail, that still hasn't translated into poll numbers for her yet.

Our real-time recap of the debate is below. Check out NPR's live chat too for more.

Perry: Texas is a success story, and I'd bring that to the White House

Santorum: I'll look out for the American worker and will reduce immigration.

Jindal: We don't have to abandon our conservative principles to win, and I can unite the country. Jindal also took a shot at Bush's assertion that Republicans have to "lose the primary to win the general."

Fiorina: I can "throw every punch" against Hillary Clinton, and I'm not a professional politician. (She also appeared to leave her closing statement on a hotel printer, as spotted by Rand Paul's spokesman Sergio Gor.)

Graham: I can be commander in chief on Day 1 and win the fight against ISIS.

Pataki: I delivered in a blue state like New York and I can deliver for the country.

Gilmore: I have the experience as a prosecutor, military veteran and governor to be president.

6:10 p.m. The candidates are asked to describe Hillary Clinton in two words (spoiler alert: they all used more than two words). Here's how they responded.

Pataki: "Divisive and with no vision. No vision at all." — 9 words

Fiorina: "Not trustworthy. No accomplishment." — 4 words

6:07 p.m. Rapid-fire questions reveal a place where all the candidates agree — they'd all tear up President Obama's executive orders on their first day in office.

6:03 p.m. When asked whether defunding Planned Parenthood would play into Democratic attacks about "The War on Women," Graham manages to pivot to saying the real war on women is in the Middle East, reminding voters he would send troops in to protect those areas and fight back ISIS. Foreign policy is obviously where Graham is the most comfortable.

5:59 p.m. MacCallum points out Pataki is the only pro-choice candidate running. He tries to clarify and says he's personally opposed to abortion but says Roe v. Wade is the law of the land. He says he would support defunding Planned Parenthood though amid the recent controversy over videos that allege to show them selling fetal parts.

5:52 p.m. Santorum gets the question about same-sex marriage. A vocal critic of such marriages, he says it isn't settled law despite the Supreme Court's decision this month and says it's the product of a "rogue Supreme Court." He also equates it to the 1852 Dred Scott decision that effectively legalized slavery by finding blacks weren't U.S. citizens, which was eventually overturned by the 13th and 14th Amendments. Many conservatives hope another constitutional amendment could overturn same-sex-marriage legalization, too.

5:48 p.m. It took almost 50 minutes for the Iran nuclear deal to come up in this debate. Perry is asked the first question and says he would "tear up the deal." He also seems to imply he would make Fiorina his secretary of state, saying he would trust her negotiating this deal more than current Secretary of State John Kerry. Fiorina has touted her international experience and travels over Hillary Clinton when she was a Fortune 500 CEO.

5:42 p.m. Jindal takes an implied shot at Ohio Gov. John Kasich, who will be on the main debate stage. Kasich made the decision — unpopular with conservatives — to expand Medicaid in his state. Kasich has drawn on his faith for his rationale in doing so. Jindal says he wouldn't have done it, though. "I don't think anybody should expand Medicaid," he says.

Pataki also jumps in and says he thinks Medicaid expansion is wrong and he wouldn't have done it in New York, either.

Kasich has pitched the importance of Ohio (no Republican has won the White House without it) as a reason he should be the nominee. But this exchange shows there's still a lot of skepticism of him on the right, and similar questions are likely to come up at 9 p.m. too.

5:38 p.m. Santorum says he will soon introduce a "20/20 Vision" plan for the economy that would "take a blowtorch to the IRS" and include a 20 percent flat tax and increase manufacturing in the country. Santorum often gets stereotyped as simply a social issues candidate, but he has a blue collar appeal — how he got elected in Pennsylvania and how he was able to have a run of success in 2012.

5:37 p.m. Time for the economy. Graham turns the question to hit Hillary Clinton — something the party would like all candidates to do. "I know the difference between being flat broke. Clinton doesn't." He also cleaned up an anecdote he used on Monday's New Hampshire forum. Saying he knows "Clintonspeak" well, this time he says only if Bill Clinton asks "what the meaning of is, is" then "he did." On Monday, he came outright and claimed the former president had sex with intern Monica Lewinsky — one of the biggest zingers of the night.

5:28 p.m. Santorum, a hard-liner on immigration, is asked what he would do about DREAMers in the country. He uses a line that's frequent from his stump speech — how his grandfather came here from Italy, dreaming of a new life. But he did it legally. "We're a country of laws, not of men," says Santorum.

Perry is also asked about immigration, and he draws, as usual, on his experience as governor of Texas, reiterating securing the border.

5:15 p.m. Time for the elephant that isn't in the room — and these participants hoped wouldn't be here — psych! Perry is asked about Trump, whom he's been unapologetic in attacking. Perry looks surprised but doesn't back down. He points out that Trump has changed his position on health care.

Fiorina jabs at a Washington Post report that Bill Clinton called Trump before he got in. She's careful not to insult him too much, pointing out he taps into an anger people identify with, but piggybacks on Perry's point that Trump once supported health care reform and also once supported abortion rights.

5:09 p.m. Following the same line of questioning, Graham is pressed on whether he's too moderate. And Pataki and Gilmore — at the bottom of the polls — are asked whether it's time for new blood in politics. Pataki hasn't held office since 2006; Gilmore was last in office in 2002.

5:06 p.m. The Fox News moderators are going for the jugular. They start off by asking Fiorina whether her own comparisons to former British Prime Minister Margaret Thatcher are off base given her low standing in the polls. Santorum is asked whether his moment since his incredible 2012 surge has passed. And Jindal is pressed on his poor approval ratings at home. Tough questions off the bat — but they highlight each of the candidates' top weaknesses.

5:01 p.m. First question goes to Perry — who was atop the polls at this time in 2011 but famously flamed out, in part due to his poor debate performances. Perry argues the four years since as governor have made him more prepared. "Americans are going to see I'm ready to be that individual," said Perry.

But this is his biggest hurdle — reintroducing himself to voters. It's hard to make a first impression a second time.