Accessibility links
Inside Hillary Clinton's Debate Watch War Room : It's All Politics At her Brooklyn HQ, staffers huddled over their laptops making graphics and GIFs to respond to the Republican debates. Meanwhile, Bernie Sanders ate pizza and live tweeted the GOP debate. 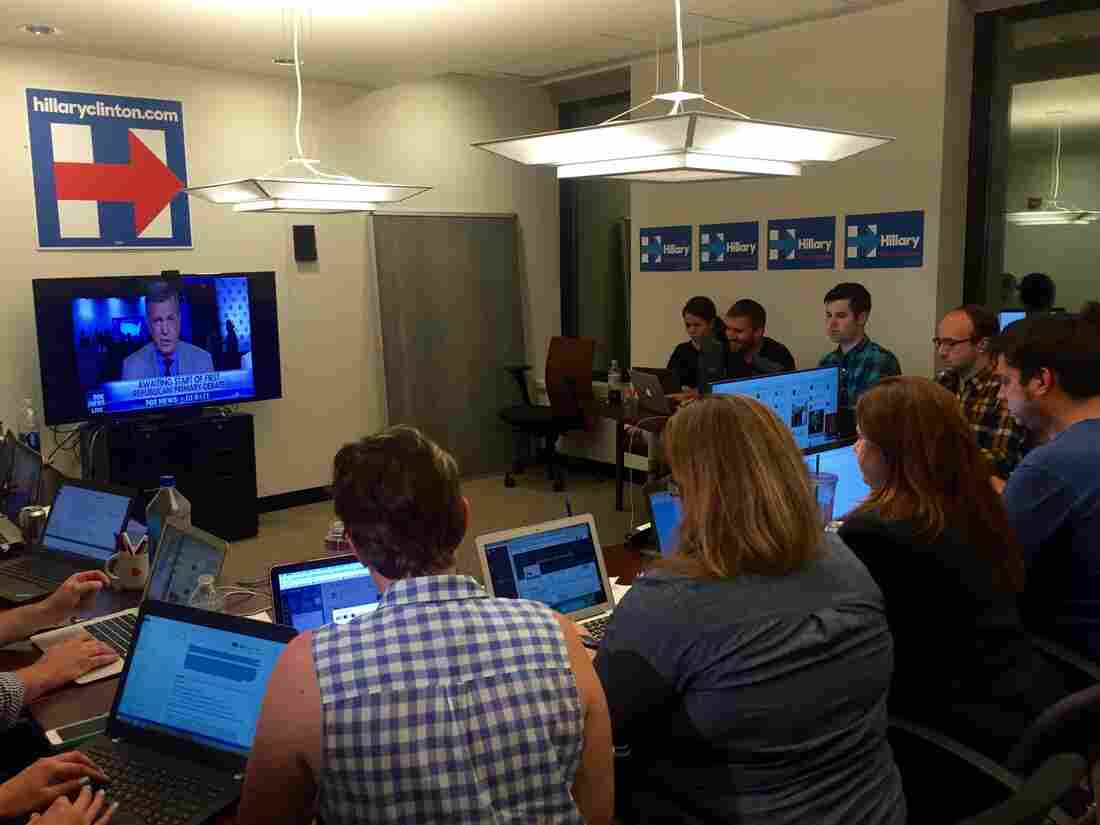 The Clinton campaign's debate watch war room was actually just a conference room with a big-screen TV at the front. Fifteen or so staffers huddled over their laptops ready to pounce. Tamara Keith/NPR hide caption 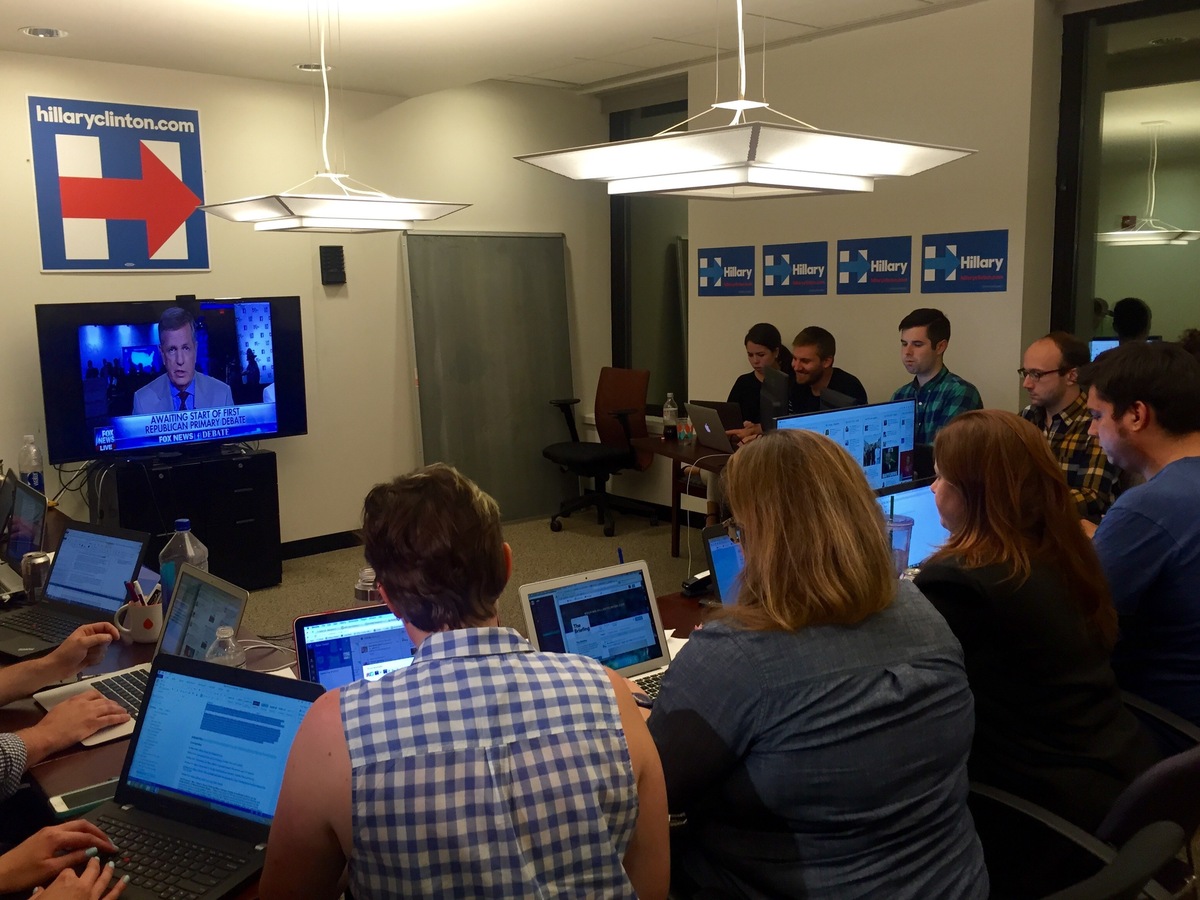 The Clinton campaign's debate watch war room was actually just a conference room with a big-screen TV at the front. Fifteen or so staffers huddled over their laptops ready to pounce.

While the Republican candidates debated Thursday night, Democratic campaigns tried to make the most of the moment, offering rapid response.

At the Hillary Clinton campaign headquarters on the 11th floor of an office building in Brooklyn, N.Y., about 50 staff members gathered to watch the debate. Some were working. Others were holding beers (at least one wrapped in the "Chillary Clinton" beer koozie sold in the campaign merch store).

There was a "war room." Though, as they probably all are, it was actually just a conference room with a big-screen TV at the front and 15 or so staffers huddled over their laptops ready to pounce.

"They're probably going to say some things about Hillary Clinton that are not true as well. So our fact checkers, let's give it up for our research team," shouted Mook to cheers.

Clinton's team tweeted out the first fact check just 13 minutes into the debate. It came in response to Florida Sen. Marco Rubio's answer to a question about whether he has enough experience.

When Rubio said "if this election is a resume competition, then Hillary Clinton's gonna be the next president," cheers went up in Clinton HQ. And the campaign tweeted that it rated Rubio's statement true.

During the debate, reporters were kept in a press filing room decorated with giant posters displaying quotes from Republican candidates heaping praise on Clinton.

Out in the headquarters maze of cubicles, staffers were busy making graphics and GIFs, highlighting quotes from the debate. The tweets came every few minutes. And during commercial breaks, Mook offered instant spin to reporters.

"I think they're digging the hole deeper," Mook said to a small gaggle of reporters on the Clinton beat.

But his attention quickly turned back to the TV.

"Don't get between me and Donald," Mook said.

Trump, that is. At one point Donald Trump said Clinton accepted the invitation to his wedding only because he gave a lot of money to the Clinton Foundation. So she had to come. Clinton campaign communications director Jen Palmieri said that wasn't it. They were acquaintances.

"It hurt her feelings, I'm sure, to hear him suggest that he didn't want her there for her company," said Palmieri.

Tonight, follow the debates live with me and use the hashtag #DebateWithBernie to join the conversation. pic.twitter.com/Mh9XrzWeA3

Sanders tweeted throughout the debate, though it was really a staffer sitting next to him on a tan leather couch typing up the senator's thoughts.

It's over. Not one word about economic inequality, climate change, Citizens United or student debt. That's why the Rs are so out of touch.

In the end, Sanders complained that no one talked about income inequality or climate change.

Former Maryland Gov. Martin O'Malley's campaign adopted the hash tag #WWMOMD ("What Would Martin O'Malley Do") for its rapid response throughout the night.

Hillary Clinton wasn't at her campaign headquarters for the debate, though. She was in California at a fundraiser attended by 250 people. She raised more than $600,000 in 90 minutes. Kim Kardashian (the entrepreneur who is famous for being famous) and her rapper husband Kanye West were among those in attendance. Kardashian blasted out a selfie she shot with Clinton to all her social media channels. West looks to be photo bombing in the background.

I got my selfie!!! I really loved hearing her speak & hearing her goals for our country! #HillaryForPresident pic.twitter.com/zGpdcGSZBD