Accessibility links
Donald Trump's Policy Positions Lack Specifics ... So Far : It's All Politics The billionaire businessman and GOP presidential front-runner wants to "Make America Great Again!" But much of how he plans to do that is still a mystery. 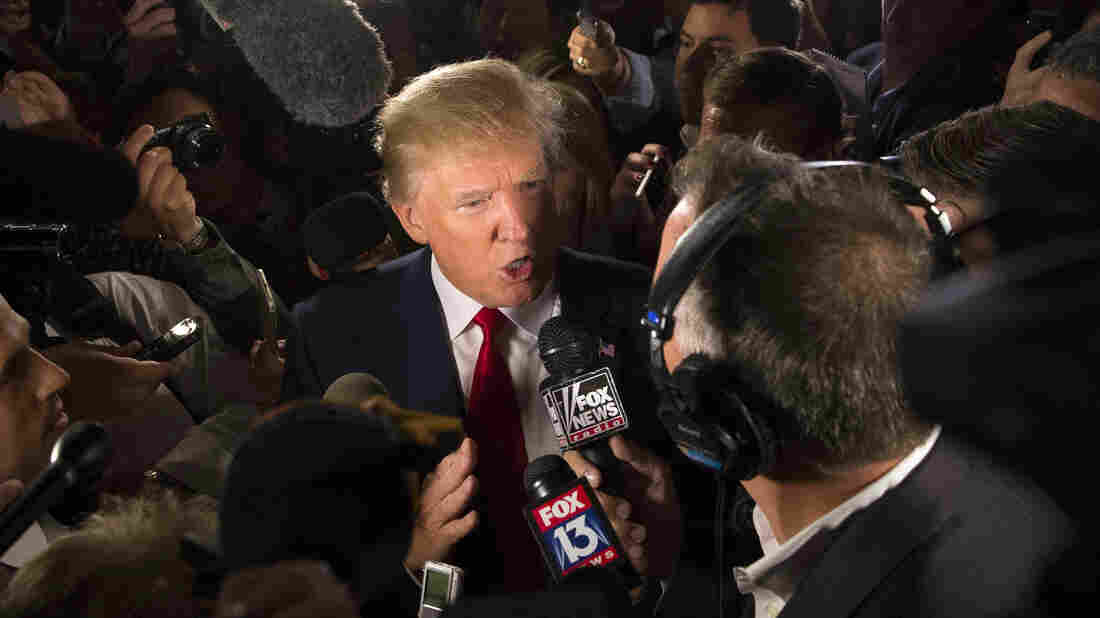 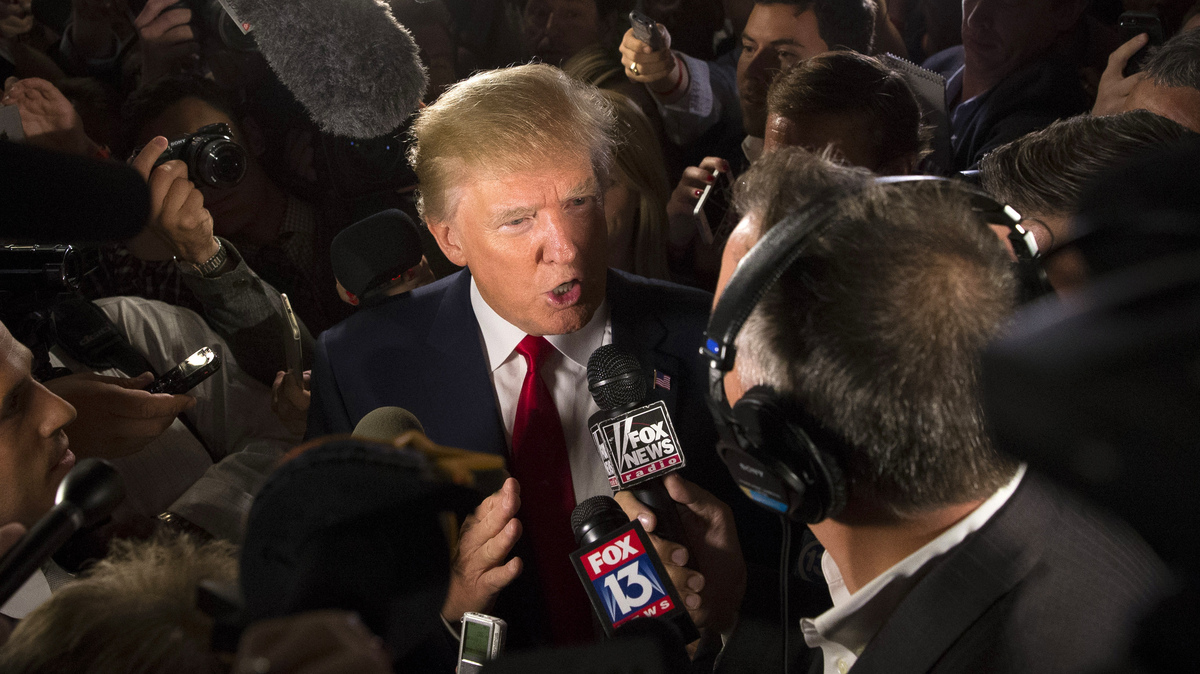 Donald Trump wants to "Make America Great Again!" But much of how he plans to do that is still a mystery.

In his nearly two months as an announced presidential candidate, the controversial and outspoken billionaire businessman has promised he would be the "the greatest jobs president God ever created."

Under fire for his comments on women after attacking Fox News host Megyn Kelly, Trump promised on Sunday that he "will be phenomenal to the women."

When asked what he would put in place of Obamacare after repealing it, Trump told CNN it should be "something terrific."

But all three statements, along with plenty of others, have not been backed up with an answer to the crucial "How?" Trump's campaign site doesn't include a policy page that is standard on most other 2016 candidates' Web pages.

Asked Tuesday morning by Savannah Guthrie on NBC's Today show about his lack of specific proposals, Trump didn't answer the question and simply pointed to the record ratings he drew for Fox News.

That stonewalling could be coming to an end soon. Trump campaign manager Corey Lewandowski confirmed to NPR the campaign is planning policy rollouts "soon" and will include explanations on Trump's website and more policy-focused speeches.

The campaign has been under pressure for some time to release more, though. Lewandowski told The John Fredericks Show nearly two weeks ago that its policy papers were ready to go.

"They're done and we're waiting for our schedule and we won't be dictated to by the mainstream media to tell us what we should or shouldn't be doing and how these positions should be put out front," said Lewandowski.

Until those policy proposals arrive, here's what we know about where Trump stands on some of the most important issues in this campaign cycle.

This is the issue Trump has become most well-known for, following his controversial comments in his June announcement speech that Mexico was sending its "criminals and rapists" across the Southern border.

Trump's plan is to build a 1,933-mile wall — the length of the U.S. border with Mexico — and to force the neighboring nation to pay for its estimated $20 billion price tag. Trump, so far, has offered no alternative on how to pay for the fence if Mexico does not.

As for the rest of the immigrants in the country illegally, he would deport them all — something the liberal Center for American Progress has estimated would cost between $20 and $25 billion.

He hasn't offered any more specifics on how exactly he would round up those estimated 11 million immigrants. "We're going to have plenty of time to talk about it," he said on a whirlwind trip last month to the Mexican border.

But he did tell CNN he would let the "good ones" come back into the country with an "expedited process" to be able to live in the country legally — but not as citizens.

"We've got to move 'em out; we're going to move 'em back in if they're really good people," Trump said.

In the same CNN interview, Trump was noncommittal on whether he would treat young people brought here illegally when they were children — known as "DREAMers" — saying it would "depend" and acknowledging it's a "tough situation."

In Thursday's debate, Trump was pressed on his own business bankruptcies but not on the specifics of how he would jump-start the economy.

In those writings and statements, Trump says he would repeal the estate tax and lower the corporate tax rate to zero — except for businesses that outsource jobs, which would have a 20 percent tax imposed. He also supports lowering the tax rate on capital gains.

Trump has been unapologetic in admitting he tries to use the current tax code to his advantage.

"I fight like hell to pay as little as possible for two reasons. No. 1, I'm a businessman. And that's the way you're supposed to do it," Trump told CBS.

"The other reason is that I hate the way our government spends our taxes. I hate the way they waste our money. Trillions and trillions of dollars of waste and abuse. And I hate it."

This is where Trump could run into trouble within the GOP. While the rallying call for years has been against a single-payer system, the businessman even acknowledged in Thursday's debate he had been supportive of such a system in the past. He says now that circumstances have changed.

"It works in Canada, it works incredibly well in Scotland, it would have worked in a different age," Trump said. "What I'd like to see is a private system without the artificial lines around each state."

Trump has shown a willingness to still include some type of need-based assistance like Medicaid, though.

Trump doesn't support Common Core education standards, and he has attacked rival Jeb Bush over the former Florida governor's support for them.

We must stop Common Core from controlling state & local curriculums. It is a federal grab of education. Keep education local!

Common Core is a federal takeover of school curriculum. Department of Education should be disbanded not expanded. Focus on local education.

Trump outlined his plans to take out the militant insurgent group ISIS Monday on MSNBC's Morning Joe, saying he would target its oil reserves to weaken its influence.

Trump admitted that would require ground troops, though.

"And in order to do that, you would have to put boots on the ground. I would knock the hell out of them, but I'd put a ring around it and I'd take the oil for our country," he continued.

In 1999, Trump said on NBC's Meet The Press that while he "hates the concept of abortion," he was "very pro-choice" and wouldn't ban any abortions as president, including "partial birth" abortions.

Now, he's singing a very different tune. During Thursday's debate, Trump said he was "pro-life" and has evolved on the issue.

Trump also told CBN's David Brody earlier this year he supports a 20-week abortion ban. He said on CNN Tuesday he supports exceptions for life and health of the mother.

In that same interview 16 years ago, Trump said he was undecided on same-sex marriage and that gays serving in the military "would not disturb me."

In an interview with CNN's Jake Tapper in June, just after the Supreme Court legalized same-sex marriage, Trump said he was for "traditional marriage." Trump did admit that some may see his position as hypocritical given he's been married three times.

Suffice it to say he's not a believer.

This very expensive GLOBAL WARMING bullshit has got to stop. Our planet is freezing, record low temps,and our GW scientists are stuck in ice

As PBS NewsHour points out, Trump has described himself as "a very strong person on the Second Amendment" but he does support more control than many conservatives. In his 2000 book The America We Deserve, Trump said he supports a ban on assault weapons and longer waiting periods.

Following the death of five military members who were killed in Chattanooga, Tenn. — unarmed at a recruitment facility — Trump said gun-free zones should be abolished. If guns had not been banned in these areas, the troops could have been saved and could have defended themselves, many believe.

Get rid of gun free zones. The four great marines who were just shot never had a chance. They were highly trained but helpless without guns.

Here was his view on gun control back in January of this year.

Fact – the tighter the gun laws, the more violence. The criminals will always have guns.