Accessibility links
Eat, Speak And Stumble: Candidates Visit The Iowa State Fair : It's All Politics For years the fair, which begins Thursday, has provided a platform for presidential candidates vying in the all-important Iowa caucuses. But they haven't always held on to their pork chops.

You might have heard of the famous butter cow — a life-sized cow made of butter that headlines every Iowa State Fair. But perhaps you didn't know that in 1952, the fair also featured butter sculptures of that year's presidential candidates Dwight D. Eisenhower and Adlai Stevenson.

It's just another example of the symbiotic relationship between politicians and the fair — and it's only gotten deeper over the decades. 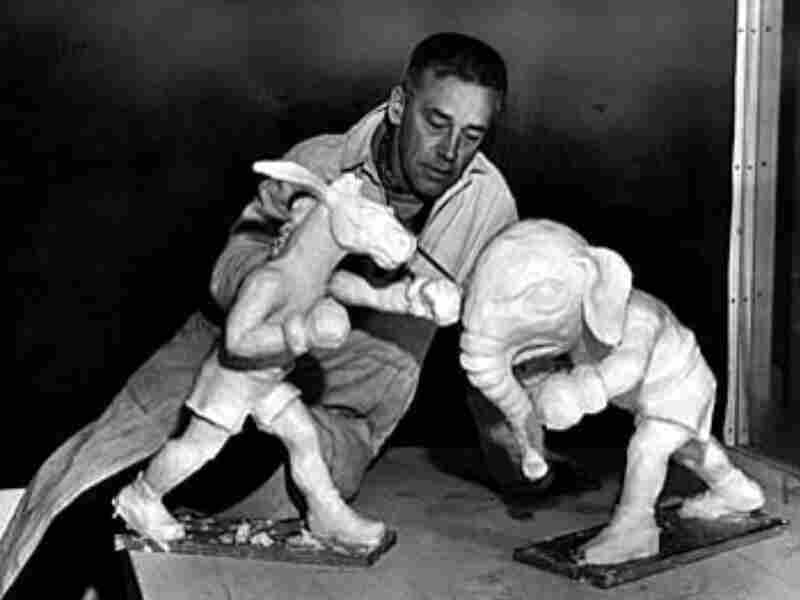 In 1952, the Iowa State Fair featured butter sculptures of a donkey and elephant along with candidates Dwight Eisenhower and Adlai Stevenson in a boxing ring. Des Moines Tribune/Courtesy of Des Moines Register hide caption 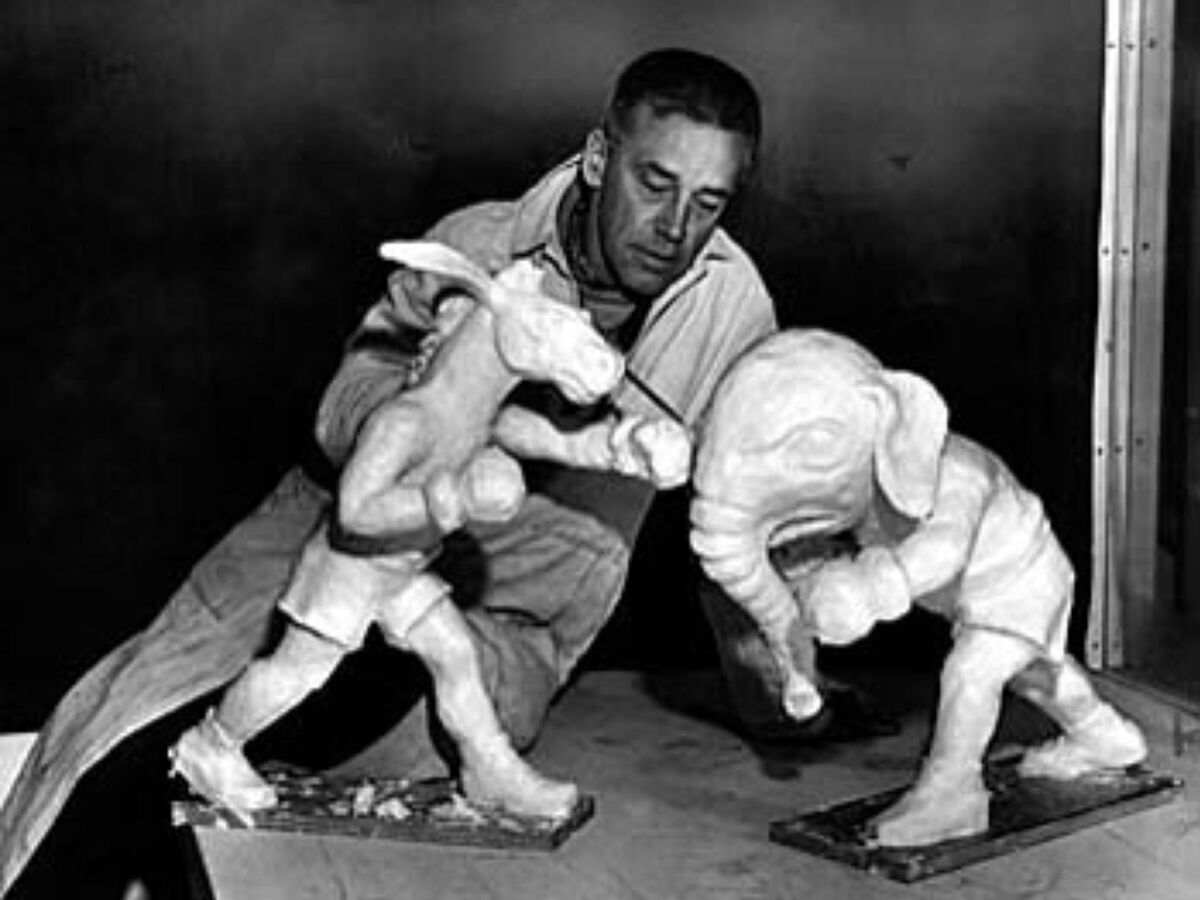 In 1952, the Iowa State Fair featured butter sculptures of a donkey and elephant along with candidates Dwight Eisenhower and Adlai Stevenson in a boxing ring.

More than a million people are expected to attend. In addition to corn dogs, fried Oreos, fried butter and rides on the Tilt-A-Whirl (we're not sure those exactly go together), many of the presidential candidates are expected to be on hand.

There are big bales of hay for audiences to sit on, and a small outdoor stage known as the Soapbox, sponsored by the Des Moines Register. Every candidate hoping to do well in the Iowa caucuses comes through.

There are the big names, like John McCain, Mitt Romney, Hillary Clinton and Barack Obama, who have attended in recent years.

"People kept saying you've got to come to the very best fair — and that's the Iowa State Fair," Clinton said to cheers in 2007.

And there are those you've either forgotten or never even heard of — like Republican Rep. Thaddeus McCotter from 2011.

"After I'm done I'll have the opportunity to see the 100th butter cow. ... Coming from Detroit, that's not an opportunity we get every day," McCotter said.

Thursday alone the Soapbox will host Mike Huckabee, Martin O'Malley and Jim Webb. Friday it's Jeb Bush, and on Saturday, Bernie Sanders. Hillary Clinton is expected to attend the fair Saturday as well, but the Register reports she hasn't accepted the Soapbox invitation, and it appears increasingly unlikely. But more candidates will speak as this year's fair continues.

The first test for candidates comes right at the main entrance, said O. Kay Henderson, an Iowa native who has covered candidates at the fair for Radio Iowa for more than 25 years.

Her advice: "Try to have money in your pocket, because they will not let a candidate in the fair for free." 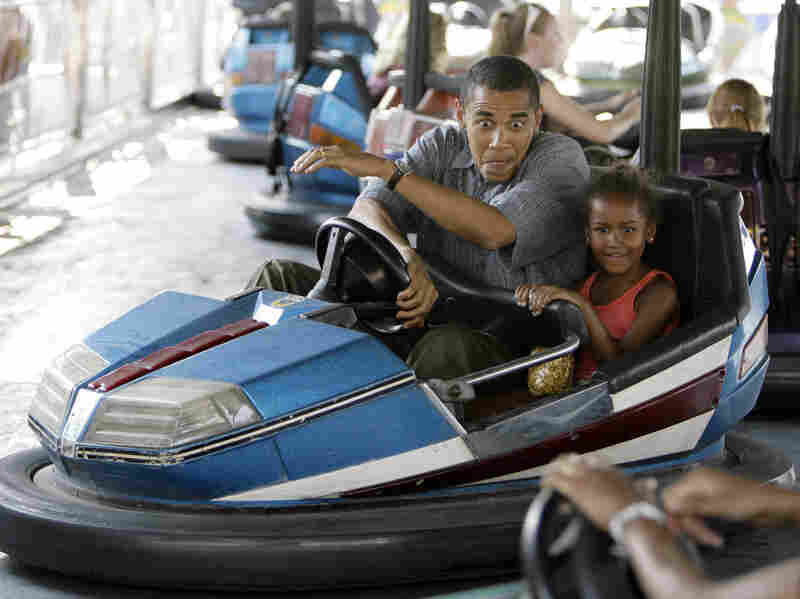 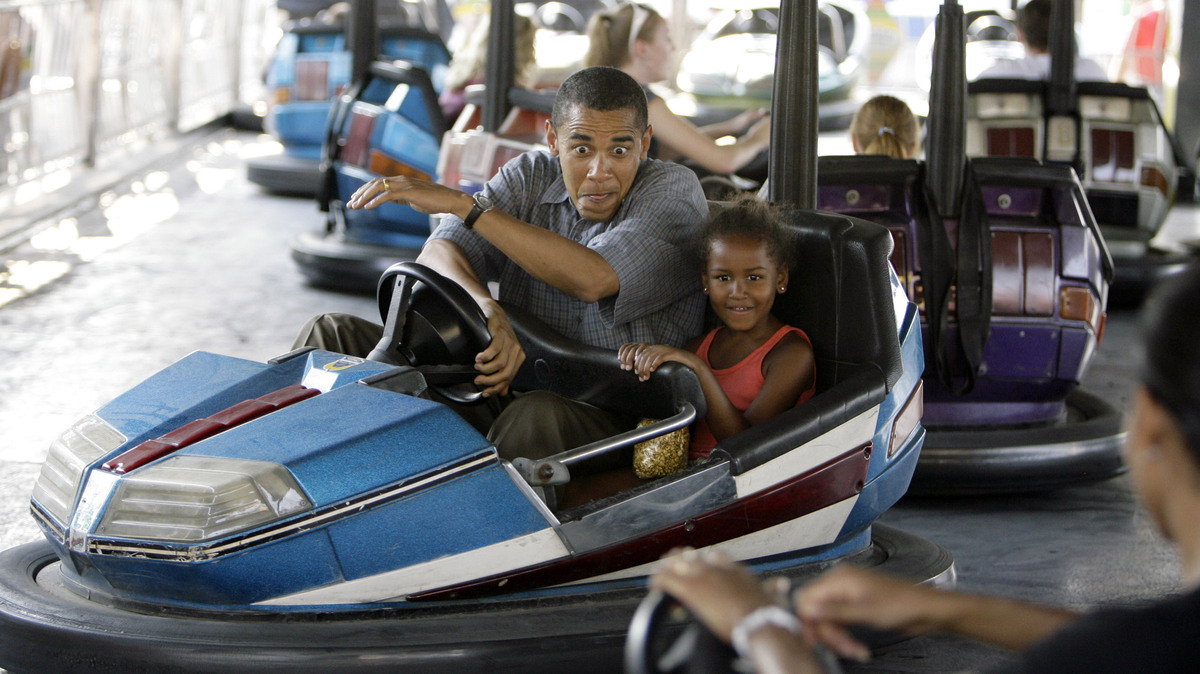 In 2007, then-candidate Barack Obama rode bumper cars at the Iowa State Fair with his daughter Sasha.

On the surface, a campaign stop at the state fair seems simple enough. But it doesn't always work out that way. There's the now legendary story of GOP hopeful Fred Thompson wearing expensive Gucci loafers to the fair eight years ago. For the record, Thompson denies they were Gucci.

And then there's Mitt Romney's experience that same year. He was at the Iowa Pork Producers booth, cooking over a giant pit, flipping pork chops.

But he flipped one too high, and it landed on the ground. "Whoa, there goes one!" he remarked to groans from the audience.

But the bigger reaction from the crowd came when he picked it up and put it back on the grill.

Four years later Romney was running again — and again, another awkward moment at the fair. He encountered vocal hecklers during a speech at the Soapbox, one of whom yelled, "You came here to listen to the people."

It went back and forth like that for some minutes, until Romney uttered this line on the need to cut corporate taxes: "Corporations are people, my friend. Of course they are. Everything corporations earn ultimately goes to people. So, where do you think it goes?"

Romney backers cheered, the hecklers jeered — and that was the line Romney's opponents would use against him all year.

So it's State Fair time in Iowa, and that means Blue Ribbon steers, the giant Ferris wheel, hog-calling contests. And candidates on the stump, touring the grounds, meeting voters from every corner of the state — and trying not to step in it.