Accessibility links
At Clinton Event, An Emotional Conversation On Substance Use : It's All Politics In New Hampshire this week, Hillary Clinton veered from the stump speech for a somber discussion on substance abuse. Nearly everyone in the room had been affected by drugs. 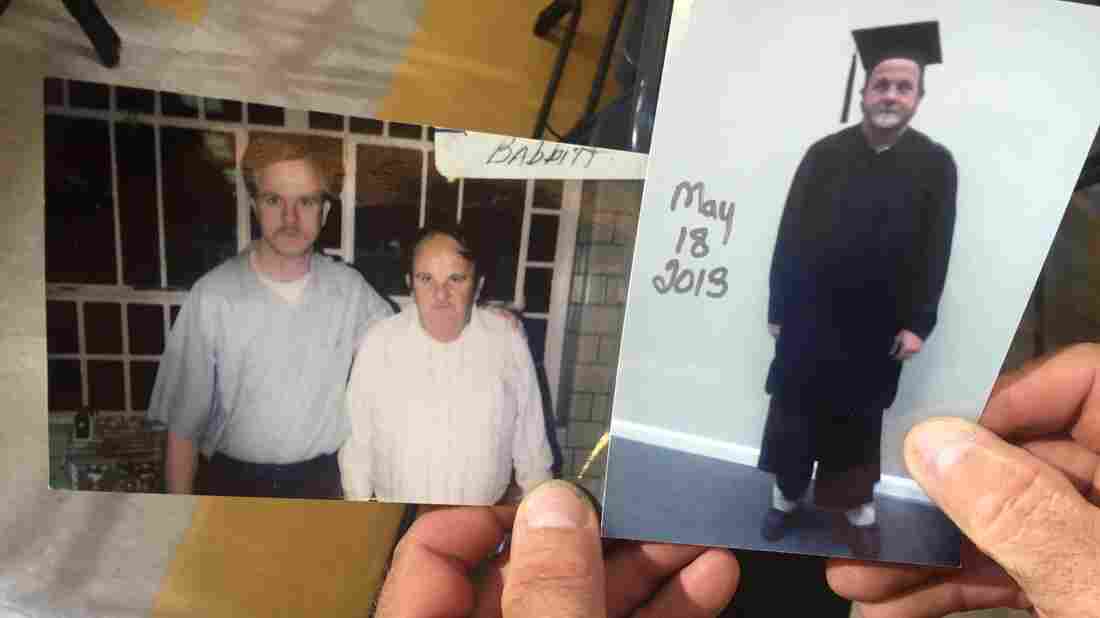 At Hillary Clinton's event, Carl Babbitt raised his hand high until Clinton called on him to tell his story. Here, Babbitt holds two photos of himself — one from when he was 29, in prison serving time for murder. Tamara Keith/NPR hide caption 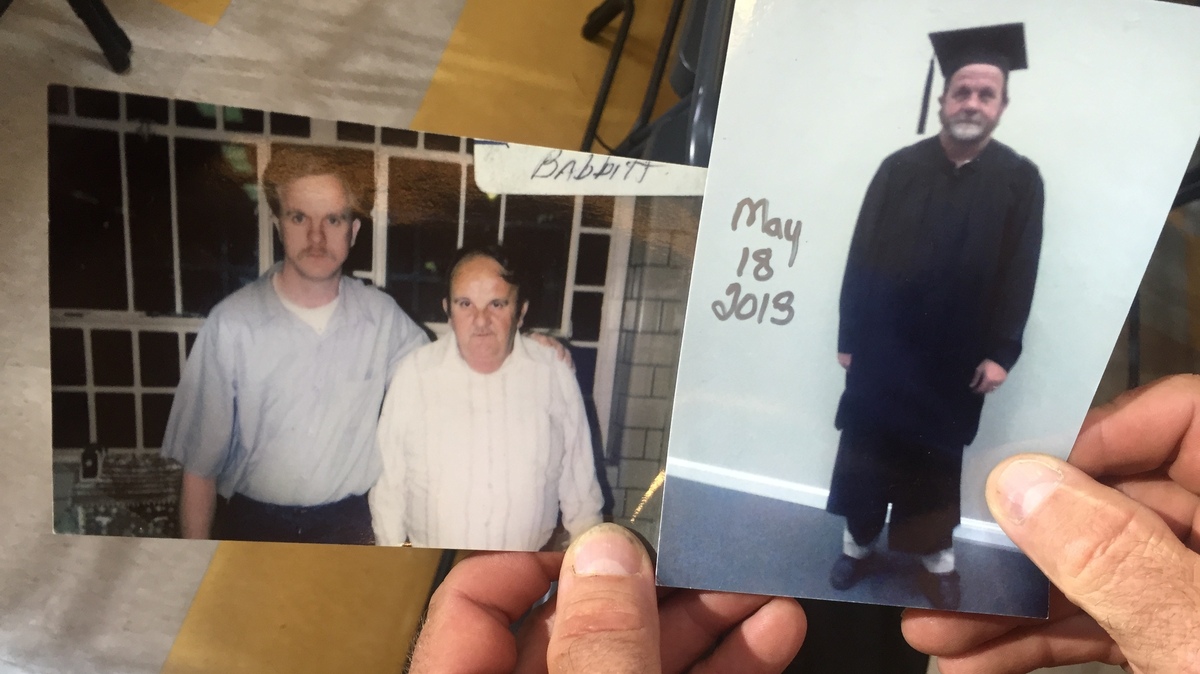 At Hillary Clinton's event, Carl Babbitt raised his hand high until Clinton called on him to tell his story. Here, Babbitt holds two photos of himself — one from when he was 29, in prison serving time for murder.

New Hampshire is in the throes of a drug epidemic driven by prescription opioids and heroin.

"The state of New Hampshire loses a citizen to an overdose death about every day," said Tym Rourke, chairman of the New Hampshire Governor's Commission on Alcohol and Drug Abuse.

"We're not bad people trying to get good. We're sick people that deserve to get well."

In New Hampshire, a recent poll about the most important problems facing the state found drug abuse ranks second. That puts it ahead of education, taxes and the state budget. And now politicians visiting the first-in-the-nation primary state are paying attention — in part because so many voters are bringing it up.

"It's just killing people all across the state, and it's unfortunate that it's taken this to happen before a broader conversation is begun in the political space," said Rourke. "Presidential candidates, if they want to do well in New Hampshire, need to answer the question of what they are going to do to help people with substance use disorders." 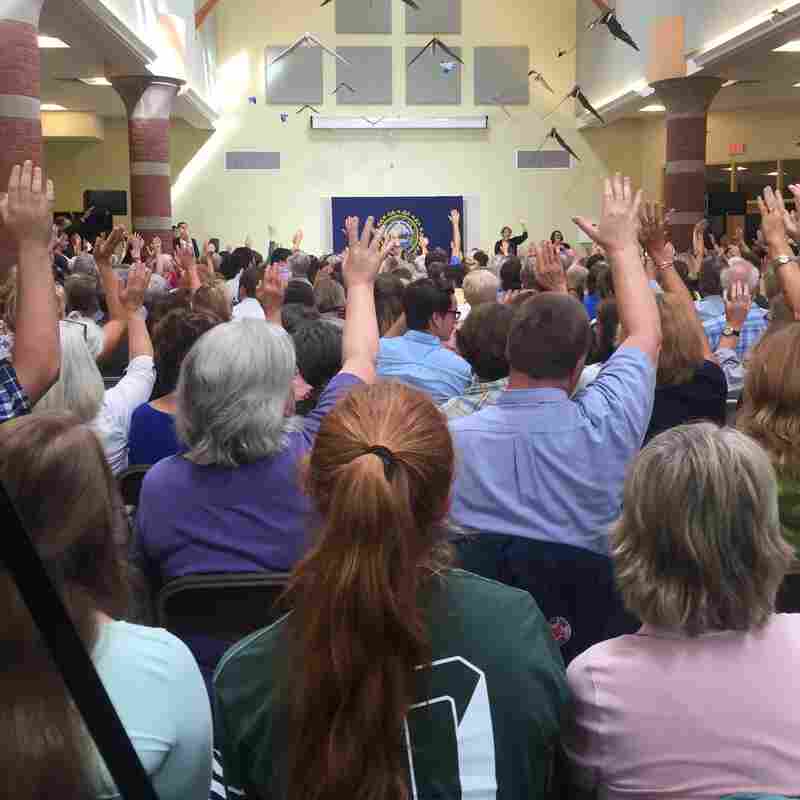 Asked how many in the audience had been impacted by substance use — their own or someone they know — nearly every hand went up. Tamara Keith/NPR hide caption

When Democratic presidential candidate Hillary Clinton visited Keene, N.H., earlier this week, she wasn't there to give her stump speech. Instead she was leading a somber discussion of substance abuse. It's something Clinton said she's been hearing about since her first trip to New Hampshire as a candidate earlier this year.

"In that very first conversation, the issue of heroin and the epidemic it represented here in New Hampshire was raised with me," Clinton told the group. "I have to confess, I was surprised."

This was anything but a typical campaign event. Clinton's campaign had set up a panel of local experts to discuss the problem and possible solutions. Polly Morris, with the group Monadnock Voices for Prevention, introduced herself as someone who is in long-term recovery. Then she asked for a show of hands.

"If you have been impacted by someone you know or your own substance use, would you just raise your hand?" Morris said.

Virtually everyone in the room raised their hands.

"If you could just keep your hands up and look around," Morris said. "So this is data right in itself. We don't have to have percentages of any kind, no pie graphs, no charts. You can see that we have all had some impact."

Maybe it was a self-selecting group. But a Granite State/WMUR poll last month found 46 percent of New Hampshire residents personally know someone who has abused heroin in the past five years. Sandi Coyle is the recovery community engagement director with a group called New Futures. She's been sober for 11 years now, but told the group she used to be addicted to alcohol and heroin.

"We're not bad people trying to get good," said Coyle. "We're sick people that deserve to get well."

The forum took on something of a confessional nature.

"I myself am in long-term recovery since 1987," said Marty Boldin, who serves on the New Hampshire Governor's Commission on Alcohol and Drug Abuse.

He addressed Clinton directly, thanking her for bringing a discussion of addiction to such prominence.

"A voice like yours can make it safe for people like me and Sandi and Polly and hundreds of other people in this audience to speak out loud," said Boldin.

And speak they did. Carl Babbitt raised his hand high until Clinton called on him.

"You look at me as a regular person, but I served 11 years in prison," said Babbitt to the surprise of many in the room. "I didn't wake up one day and decide, boom, I went out and killed a man. And it was done in a fight down in Worcester. But I want to give you a little bit of my story so you know where I came from."

Babbitt said his mom kicked him out when he was 14, and he was sexually abused by a foster parent.

"I turned to drugs and alcohol to cover that pain. I tried to get into a recovery," said Babbitt. "As soon as they found out I had no insurance, bye. I went back to doing cocaine."

This was a couple of decades ago. But people are having the same difficulty today getting into treatment. Babbitt said that six months after his failed attempt at treatment, he went into a drug and alcohol-fueled blackout and wound up convicted of murder. Now he runs a prison ministry.

Clinton's campaign is working on a plan for dealing with substance abuse problems. But there's currently no timeline for releasing it.