Accessibility links
'Spice' It Up! Trump Factor Takes Toll On 'Blanded' Walker : It's All Politics Scott Walker was riding high in Iowa until Donald Trump came along. Walker appeared at the Iowa State Fair Monday, where he tried to rekindle the fire with voters, who think he's gotten boring. 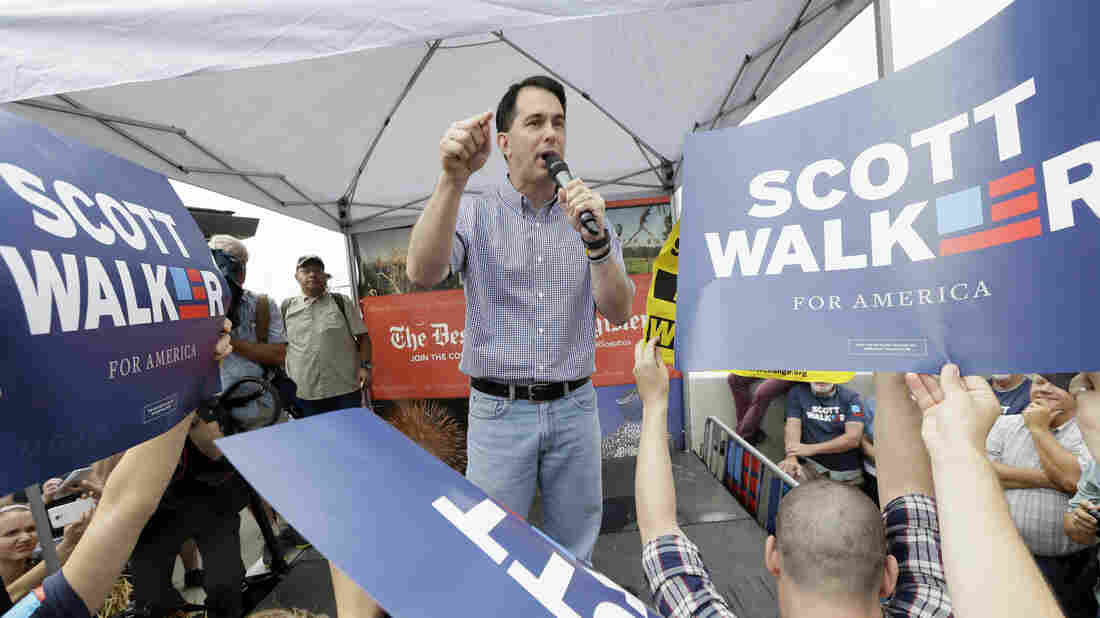 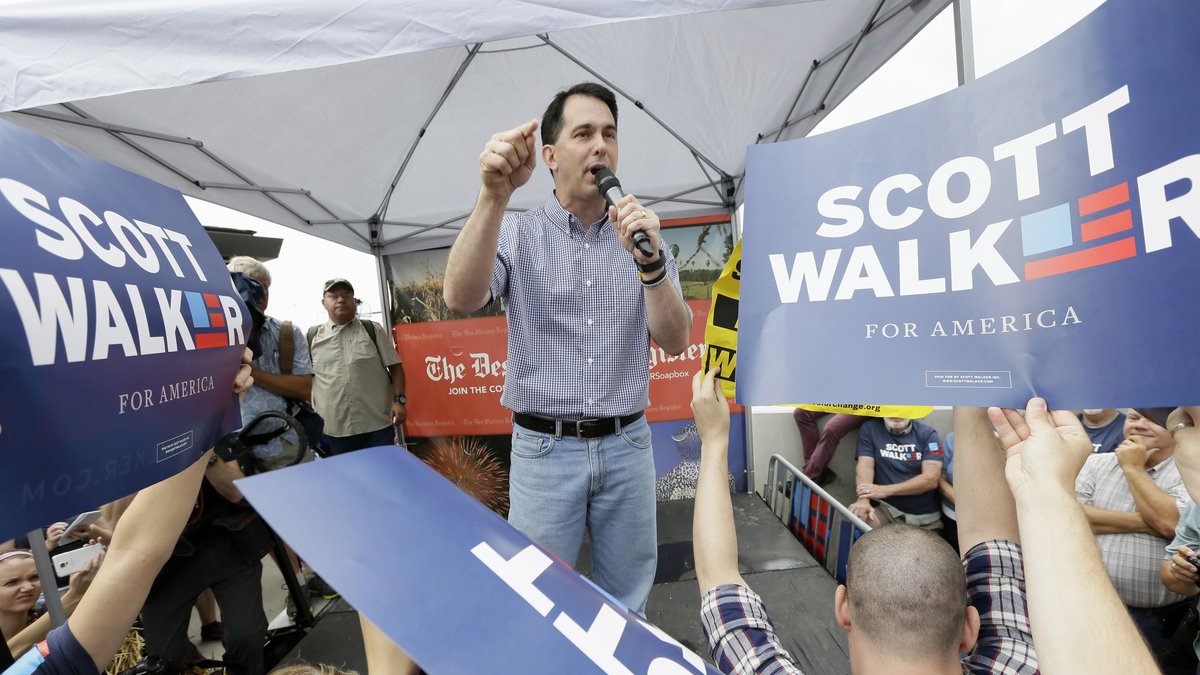 Republican presidential candidate and Wisconsin Gov. Scott Walker speaks at the Iowa State Fair, where he encountered protesters over his record in Wisconsin.

No Republican presidential hopeful this year has more riding on Iowa than Wisconsin Gov. Scott Walker.

After leading in polls in Iowa most of the year, Walker is suddenly slumping. And he might have Donald Trump to blame.

It's not necessarily that the support Walker had earlier in the summer, when he was the clear front-runner in Iowa polls, has gone to the real estate mogul. Ben Carson, Carly Fiorina and Ted Cruz have seen something of a surge since the first presidential debate.

But some voters just don't think he has lit it up quite the way he did with that fiery speech he delivered in January at a big candidate forum before he got in the race.

"Just like a bottle rocket ... meteoric rise," said Des Moines resident Dan Arthur, who called himself a conservative Republican. He's been watching the candidates, including Walker, at the State Fair this week.

After that January speech, Arthur thought he was looking at a winner. But then came summer.

"It's almost like his personality faded," Arthur added. "He blanded himself off the map. ... He has no spice."

Kim Lanc was at the fair Monday to check out Walker, too. She said she likes him but quickly added that the rise of Trump has really made it hard for Walker to break through.

"He didn't do, I don't think, very well in the debate," Lanc said of Walker. "I mean, he didn't do bad. But he just didn't do anything that was, you know, memorable, really."

But what one voter calls bland may be just the sort of thing another sees as unassuming and genuine. Denny Bell, who sells fertilizer for a living, was at the fair Monday waiting to hear Walker speak. He's undecided but said he really likes Walker.

"I think he stands up for what he believes in," Bell said. "He had a tough battle as everybody knows in Wisconsin. He kept fighting and keeps going. He's kind of a Midwest guy, and I like his Midwest values."

Walker hasn't been campaigning in the state quite as much as some of his rivals. He has held 34 events over 14 total days of campaigning, which ranks just 10th in the GOP field, according to the Des Moines Register's candidate tracker.

Trump now leads Walker in polling in Iowa. And while Walker is still in the top tier of candidates there and nationally, his support has eroded. At his speech at the Des Moines Register Soapbox at the State Fair Monday, he tried to show some of the fighter spirit that led rank-and-file conservatives to like him in the first place.

"The left doesn't want me to be your nominee, because they know that I don't just talk — I actually deliver on my promises," Walker said to cheers. "I will do that as your next president going forward."

There were lots of supporters in the crowd wearing Walker T-shirts and waving campaign signs, but there were also some union activists — many from Wisconsin — who booed and jeered as Walker spoke of his record as governor.

"We need a president who will stand up just like Ronald Reagan did," Walker said.

"You ain't standing up, you're lying," interrupted one protester as others shouted other complaints.

Walker is reluctant to talk about Trump. He'd rather talk about his own proposals and ideas. Still, in a media scrum after his speech, he did weigh in on why Trump seems to be resonating.

"I think the reason why you see not just one candidate but a couple of candidates moving in the polls, who are not elected to any position, is really a matter of a protest," Walker said. "I talk to Americans all across this country, who say I may not end up voting for this candidate, but I'm going to say in the polls that I'm for them, because I'm tired of politicians in Washington not listening to me."

The trick for Walker is to get those voters, who say nobody is listening to them, to again hear him amid an increasingly noisy campaign.