Accessibility links
Jeb Bush Is Suddenly Attacking Trump. Here's Why That Matters : It's All Politics Facing a drop in polls and on the defensive, the former Florida governor is trying to find his swagger by attacking Trump. But it's an uncomfortable position for the nonconfrontational Bush.

Jeb Bush Is Suddenly Attacking Trump. Here's Why That Matters

Jeb Bush Is Suddenly Attacking Trump. Here's Why That Matters 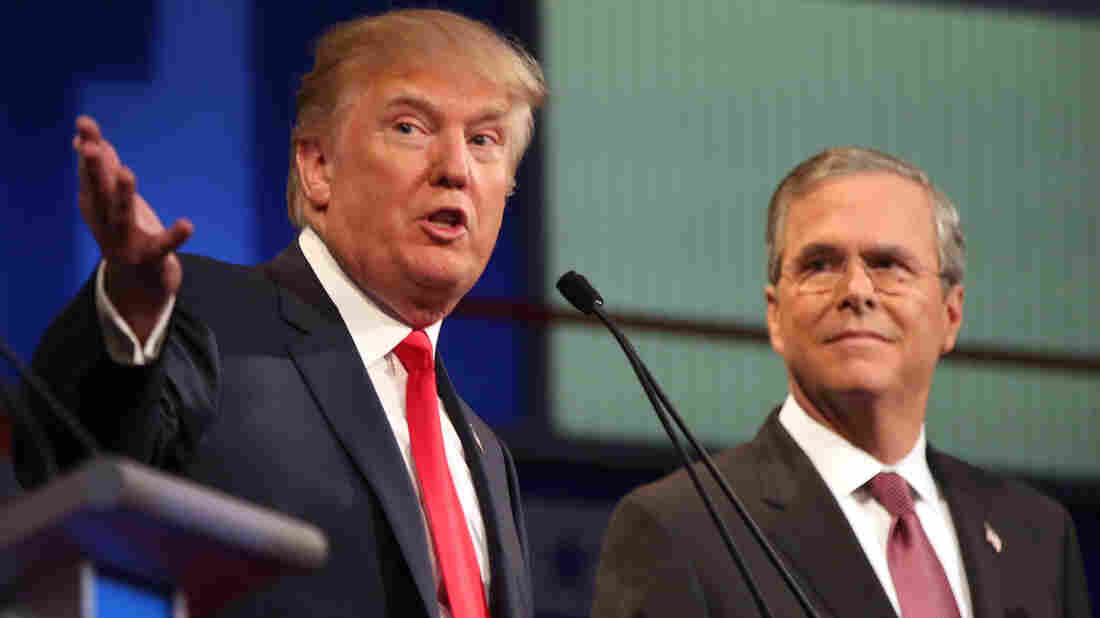 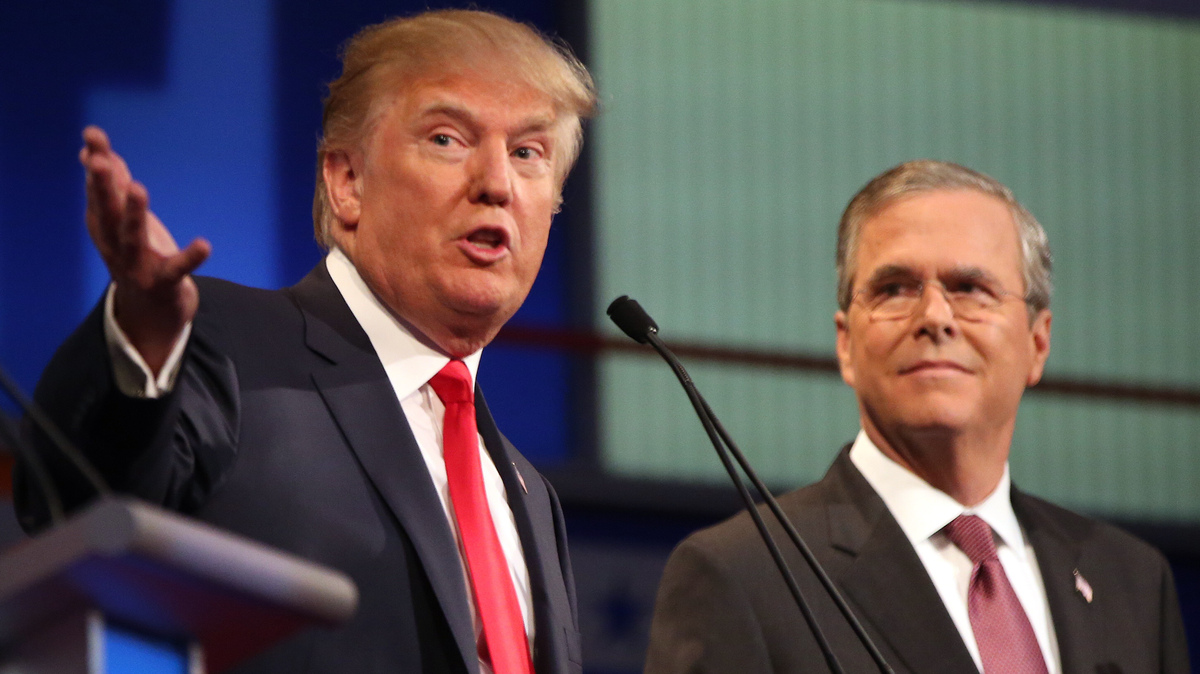 The former Florida governor has delicately danced around the billionaire businessman in the 2016 presidential primary so far. But the gloves came off this week when Bush called out Trump as a closet Democrat. He was trying to stunt Trump's rise while attempting to recover his own political mojo.

"What Jeb is desperately trying to do is find his swagger right now," GOP strategist Ford O'Connell said. "The knock against Jeb is that he's low voltage and not willing to fight. The best way to shake those perceptions it to engage against the person who is in the media on a 24/7 loop."

It's a change from Bush's approach to this point. He hasn't lobbed many direct attacks at Trump other than delicately condemning his criticism of Arizona Sen. John McCain's war service and his attacks against Fox News' Megyn Kelly.

Even in this month's first debate, Bush swatted down a story that he had allegedly called Trump a "buffoon" and a "clown," saying only that Trump's language had been "divisive." Trump called Bush "a true gentleman."

The detente ended this week. So far, most of the top-tier candidates have avoided directly attacking Trump, treating him with kid gloves so as not to anger the part of the GOP base to which Trump appeals.

In other words, the very voters they need when, they hope, Trump fades.

In split-screen New Hampshire town halls this week, Bush and Trump volleyed attacks on each other. Bush took his most pointed jabs at the current front-runner, underscoring Trump's past history as a Democrat and the liberal positions he used to hold.

"Mr. Trump doesn't have a proven conservative record," Bush said, according to the Washington Post. "He was a Democrat longer in the last decade than he was a Republican. He has given more money to Democrats than he's given to Republicans."

Bush went on to attack Trump over his hard-line immigration proposal, arguing it was not just "vitriolic" but would have a massive price tag.

"Hundreds of billions of dollars of costs to implement his plans is not a conservative plan," Bush said. "This is going to be my pitch: Let's support someone who you don't have to guess where he stands because he's consistent, because he's been governor, he's consistently had the views that he has."

Got to discuss in NH how I'm a proven conservative with a record while @realDonaldTrump isn't. Compare --> https://t.co/33y3DDzdOm

His massive inconsistencies aside, @realDonaldTrump’s immigration plan is not conservative and does not reflect our nation's values.

Over the next few days, Bush continued the hits on social media.

But Trump, never one to miss a moment to retaliate, didn't pull his punches, either. At his own town hall Wednesday, Trump blasted Bush as an unelectable "low-energy person."

"You know what's happening to Jeb's crowd just down the street? They're sleeping!" Trump said to applause.

Jeb Bush signed memo saying not to use the term "anchor babies," offensive. Now he wants to use it because I use it. Stay true to yourself!

Since then, Trump has also ramped up his attacks against Bush on Twitter.

The move to more hot rhetoric may have tripped Bush up, though. Consider his use of the phrase "anchor babies." While immigration reform is something Bush is passionate about — and has even written a book about — he's often criticized within the GOP as too liberal on the issue. Instead, a more combative Bush appeared to use the loaded phrase for the first time.

He was left struggling to defend his use of it. It may have been a signal that the attack-dog crouch he's taking is still one that isn't completely comfortable to Bush, who earlier said he wanted to campaign "joyfully."

Other candidates have embraced hitting Trump. Kentucky Sen. Rand Paul went after him forcefully in the debate, though his punch — that Trump was hedging his bets to support Hillary Clinton if she wins the presidency — didn't appear to land.

Bush, though, needs to close the floodgates. He's dropped in national polls as Trump has risen. And, in New Hampshire, where Bush once led, Trump and even newcomer Kasich have seen surges.

Cullen, a former New Hampshire GOP chairman, said the change in tone and tactics was a smart move for Bush, one that could help him in the Granite State.

"I think it's good politics for Jeb," said Fergus Cullen, a former New Hampshire Republican Party chairman. "There's 25 percent of the Republicans who are entertained by Donald Trump. But there's 60 percent of the party who say they won't vote for him under any circumstances. Those aren't Jeb Bush's people to begin with. He's trying to appeal to the other 60 percent by being the adult in the room and trying to govern."

O'Connell agreed. He pointed out that even if this new approach is one that's uncomfortable for Bush, it's necessary.

"In a lot of elections, being the studious one would have worked," he said, "but Trump has flipped the script."