Accessibility links
The Biggest Divide Between Joe Biden And Elizabeth Warren : It's All Politics The vice president may be seeking out the progressive hero's support, years after fighting one of her signature causes.

The Biggest Divide Between Joe Biden And Elizabeth Warren

The Biggest Divide Between Joe Biden And Elizabeth Warren 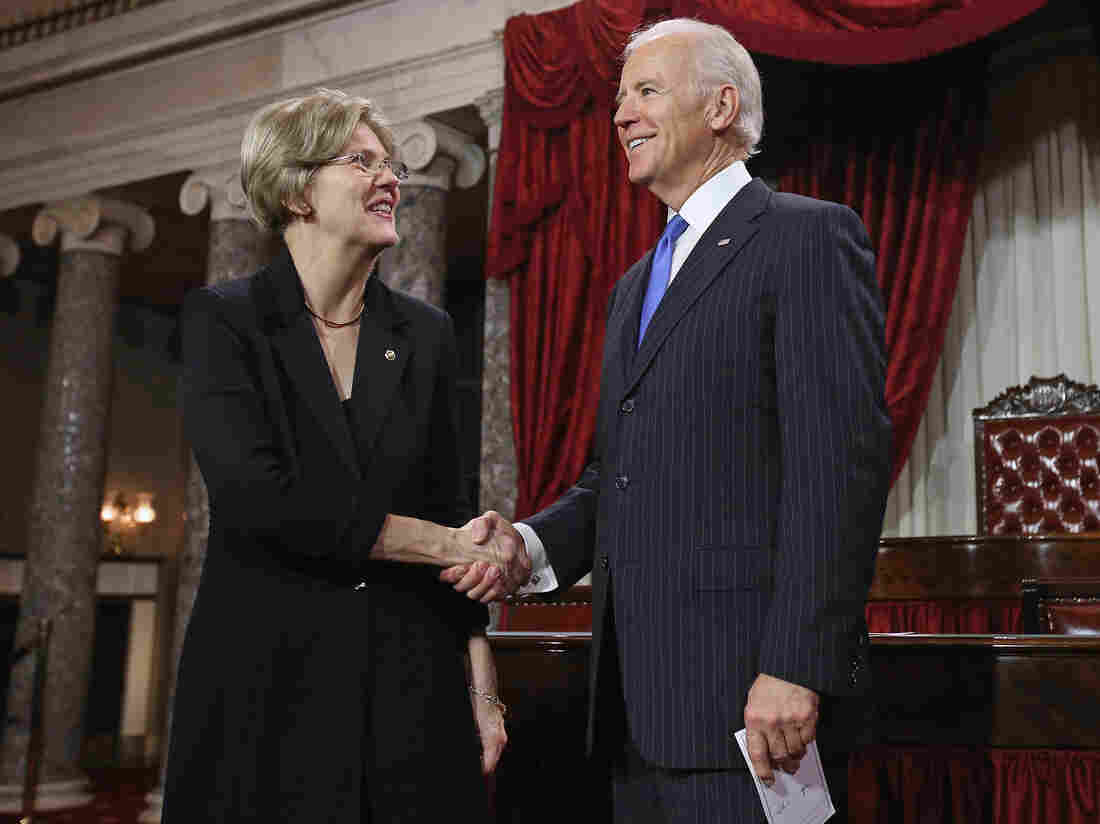 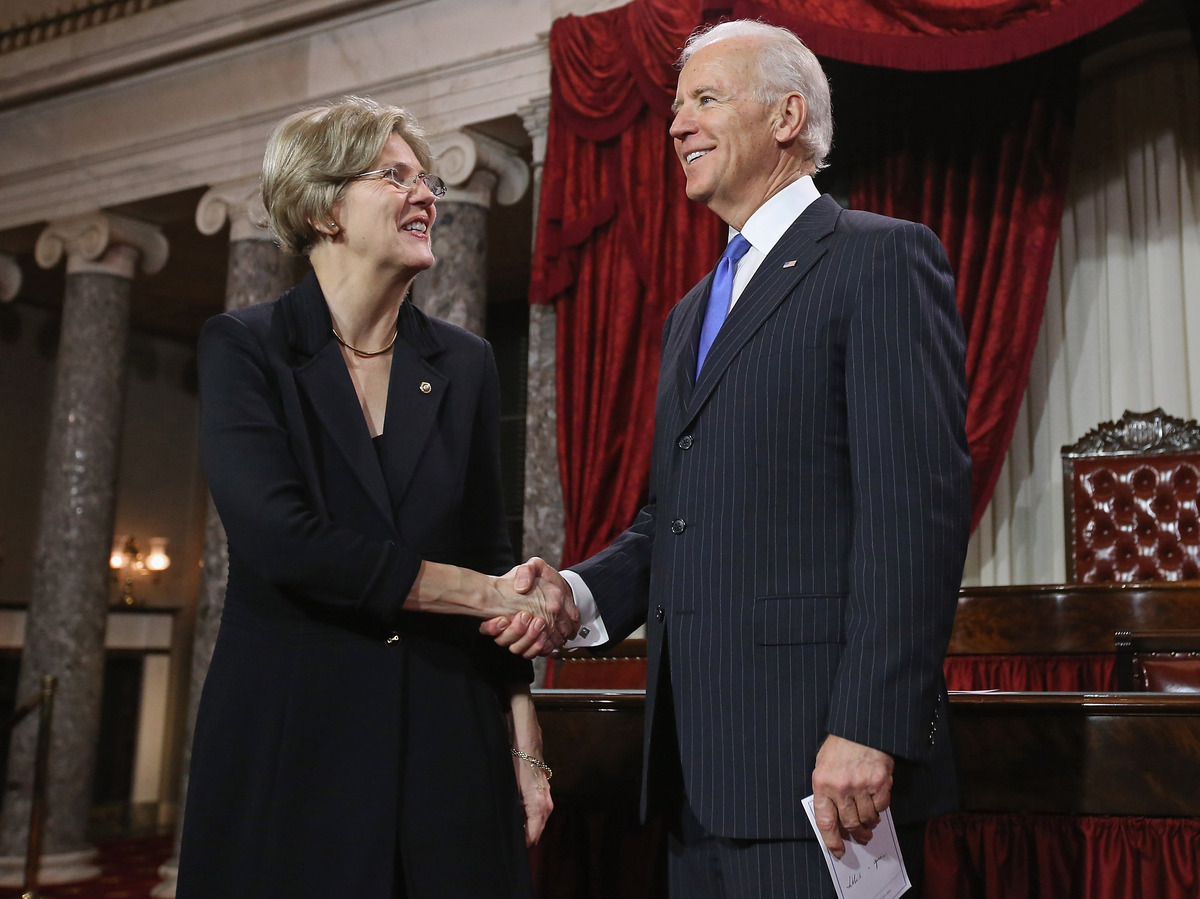 Massachusetts Democratic Sen. Elizabeth Warren and Vice President Biden at a ceremonial re-enactment of Warren's swearing-in on Jan. 3, 2013, in the Old Senate Chamber of the Capitol.

In the crowded GOP presidential field, it can pay to be loud — just ask Donald Trump. Meanwhile, on the Democratic side, even the quietest conversation by an undeclared candidate can grab headlines. Just ask Joe Biden, whose private meeting with Elizabeth Warren this weekend has Washington buzzing.

As Cokie Roberts said on NPR's Morning Edition on Monday, the meeting could have filled any number of purposes — talking about his potential candidacy or hers (though Warren has insisted she won't run), feeling out whether she would support him, or even seeking Warren as a running mate.

But this isn't just about Biden seeking support from a populist hero. Given his history of working with the credit card industry, support from Warren would be a coup for Biden in a presidential run.

Warren is, of course, best-known for her strident rhetoric against big banks. Meanwhile, Biden has close ties to the credit card industry. And that has put the two at odds in the past.

Warren called Biden out in her autobiography as one of several high-profile Democrats who championed bankruptcy legislation that helped her make her name in Washington. In 2001, with the help of Sen. Ted Kennedy, D-Mass., Warren had just succeeded in stopping a banking-industry-backed bill that would have made filing for bankruptcy more difficult.

"The Senate was evenly split between the two parties, but one of the bill's lead sponsors was Democratic powerhouse Joe Biden, and right behind him were plenty of other Democrats offering to help.

"Never mind that the country was sunk in an ugly recession and millions of families were struggling — the banking industry pressed forward and Congress obliged. ..."

That effort again failed, but the bill eventually succeeded in 2005, with Biden's vote. And that vote haunted him in the coming years, particularly as he ran for vice president while the nation edged into financial crisis. As journalist David Cay Johnston asked of Biden in a 2008 piece, "How does the 2005 bankruptcy law fulfill your Constitutional duty to 'promote the general welfare,' as it applies to those who through accident, serious illness or layoffs cannot repay their unsecured debts? How does it help resolve the current mortgage crisis?"

Another problem that arose for Biden in the 2008 race: It came to light that his son Hunter had received consulting fees from MBNA from 2001 to 2005 — at the same time Biden was supporting and voting for those bankruptcy bills.

In addition, Biden and Barack Obama parted ways on several measures aimed at either making bankruptcy easier or requiring more disclosures of credit card companies, as the New York Times also pointed out in 2008.

On top of all that, MBNA was the most generous donor — in terms of donations from its PACs and employees — to Biden's campaigns from 1989 through the 2010 race, according to the Center for Responsive Politics.

There's a reason Biden would have such close ties to MBNA and other banking companies. His home state of Delaware is also home to many credit card companies, thanks to state laws designed to lure those companies into the state — most notably, one giving companies the leeway to charge higher interest rates. So, yes, he was championing credit card companies, but he also was arguably doing what lawmakers do: boosting his state's industries.

And it's not that he always sides with banking companies. In 2011, he chided Bank of America (which owns MBNA) for imposing new debit card swipe fees while Americans were "hanging on by their fingernails" financially.

Despite that, given his links to the finance industry, it would be a very big deal for Biden (or any Democrat) to get Warren's support.

Why The Warren-Clinton Relationship Might Not Be A Deep Freeze

On the issue of bankruptcy, Warren found herself with a different ally in 2000.

"In 1998, I had met with First Lady Hillary Clinton to discuss the proposed bankruptcy legislation," Warren wrote, "and after our meeting, she had declared that she would fight on behalf of working families, against 'that awful bill.' "

"In the last days of his presidency, urged on by his wife, President Clinton stood strong with struggling families," Warren wrote. "With no public fanfare, he vetoed the [banking] industry's bill."

(Hillary Clinton's views on the bankruptcy issue would soon become less clear — as a senator, Clinton voted for a similar bill in 2001. She didn't vote on the 2005 bankruptcy bill, but she said she would have voted against it.)

These days, Warren is often presented either as a threat to Clinton or a force pulling her to the left. At the very least, the prevailing narrative is that the two stand as opposing forces in the Democratic Party.

Biden, likewise, is being framed as a potential anti-Clinton addition to the race. But just because they're both not-Clinton doesn't mean Biden and Warren will necessarily join forces.

In Washington — as with anywhere — relationships are complicated.