Accessibility links
Donald Trump's Evolution On Campaign Fundraising : It's All Politics When the billionaire developer entered the presidential race, he drew a sharp line between other candidates — needy candidates, always trading favors for money — and himself. 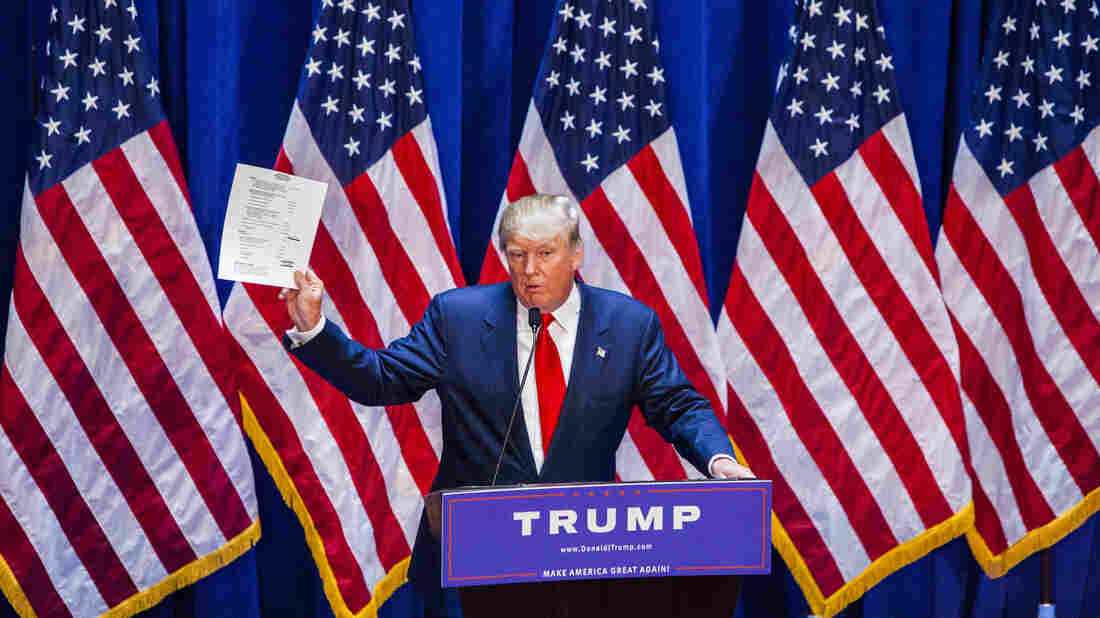 Donald Trump holds financial documents at his campaign announcement in June. He had said he didn't need donors because he could pay for his campaign himself, but he recently said he'd be open to people "investing" in his campaign. Christopher Gregory/Getty Images hide caption 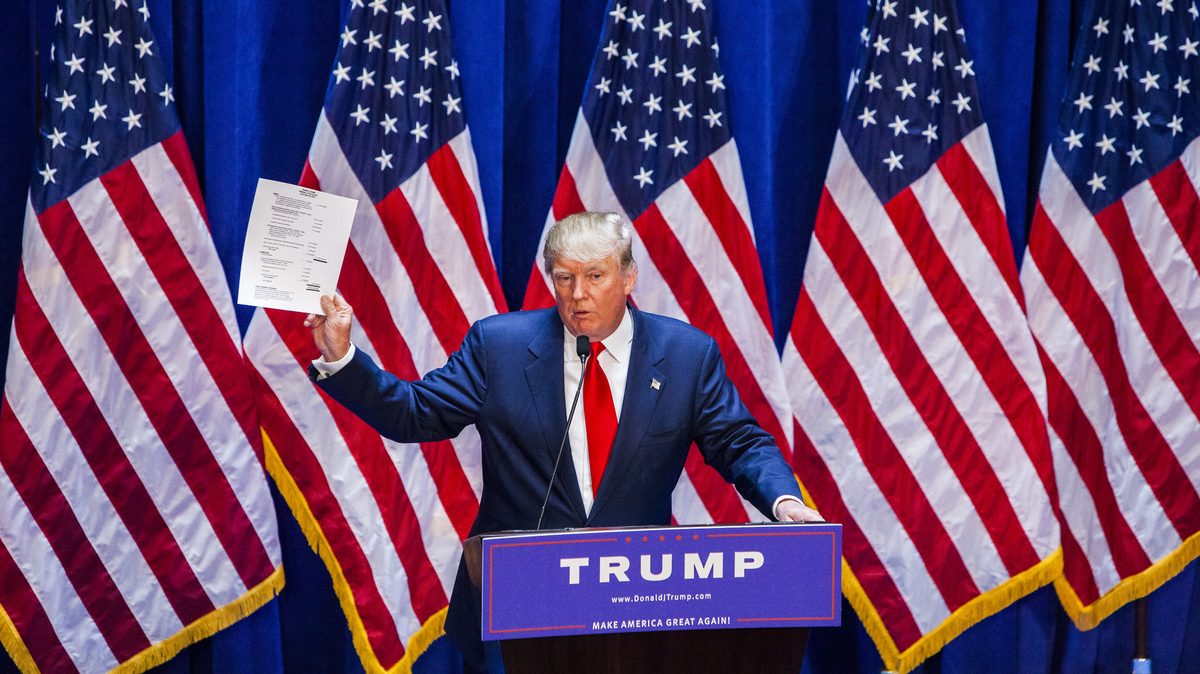 Donald Trump holds financial documents at his campaign announcement in June. He had said he didn't need donors because he could pay for his campaign himself, but he recently said he'd be open to people "investing" in his campaign.

When billionaire developer Donald Trump entered the presidential race two months ago, he drew a sharp line between other candidates — needy candidates, always trading favors for money — and himself.

But politics has a hardy euphemism that comes into play here: the word evolve. It comes up, sincerely or derisively, when a politician changes position. Right now, it appears that Trump is evolving on the very issue that set him apart: his billionaire's pledge to pay for his presidential campaign himself.

Trump puts his net worth somewhere north of $10 billion. Forbes magazine, Bloomberg News and Trump's own financial report filed with the Federal Election Commission suggest the total is less than half that much.

Trump's first campaign finance report, for the period ending June 30, recorded $1.9 million in receipts. Donors put in 5 percent, or $92,249. The remaining $1.8 million came in loans from Trump himself.

But the report also disclosed that Trump had already spent nearly $22,000 on fundraising. It contracted with Newsmax, a conservative website, to raise money by email. Newsmax has similar arrangements with some of the other Republican presidential campaigns.

That phrase is also the Trump campaign's motto. Trump wears a baseball cap embroidered with the phrase — and Trump also owns the trademark on it. He filed the application less than a week after President Obama defeated Republican Mitt Romney in 2012. Trademarking is a slow process; the phrase was finally registered this July.

This summer, Trump has derided other candidates for courting wealthy donors.

At a town meeting last week in Derry, N.H., he sarcastically listed some of his rivals:

"All of that money that's going to Hillary, and Jeb, and Scott, and Marco and all of them — the people that are putting up that money, it's like puppets."

The superPAC Make America Great Again has yet to file a financial disclosure report. But this weekend, it got a $100,000 contribution; a family friend said it came from Seryl Kushner, whose husband, Charles, is, like Trump, a developer in New York and New Jersey. The couples are longtime friends, and Trump's daughter Ivanka is married to the Kushners' son Jared.

Trump was interviewed Sunday on CBS's Face the Nation, and he allowed that he wants donors. He mentioned a woman who contributed $7.23 and added, "I would even take big contributors, as long as they don't expect anything."

He explained the no-strings rule by suggesting that donors are investors, saying, "I actually like the idea of investing in a campaign, but it has to be no strings attached. I don't want any strings attached."

Some political veterans say Trump's evolution isn't unusual. Tom Reynolds, a Republican strategist and former congressman from New York, said Trump put himself out there as a candidate, then saw he was drawing big crowds and strong poll numbers. Now, Reynolds said, "The next move he's looking at is, I don't want to or I can't fund all this myself. I'm therefore looking to fundraise to help me do that."

"The truth is, the rhetoric he's used is much more important to them than whether he raises money or not — so long as he keeps using the same rhetoric," Sheinkopf said. "If the rhetoric changes, though, and he appears to be softer, he'll likely lose a significant amount of support."

In other words, Trump is probably safe in letting his campaign evolve, but his message can evolve only at his peril.