Accessibility links
Before There Was The Donald, There Was Arnold : It's All Politics Donald Trump's foray into politics has had some scratching their heads. But not in California, where celebrity candidates like former Governator Arnold Schwarzenegger are, like, so 12 years ago. 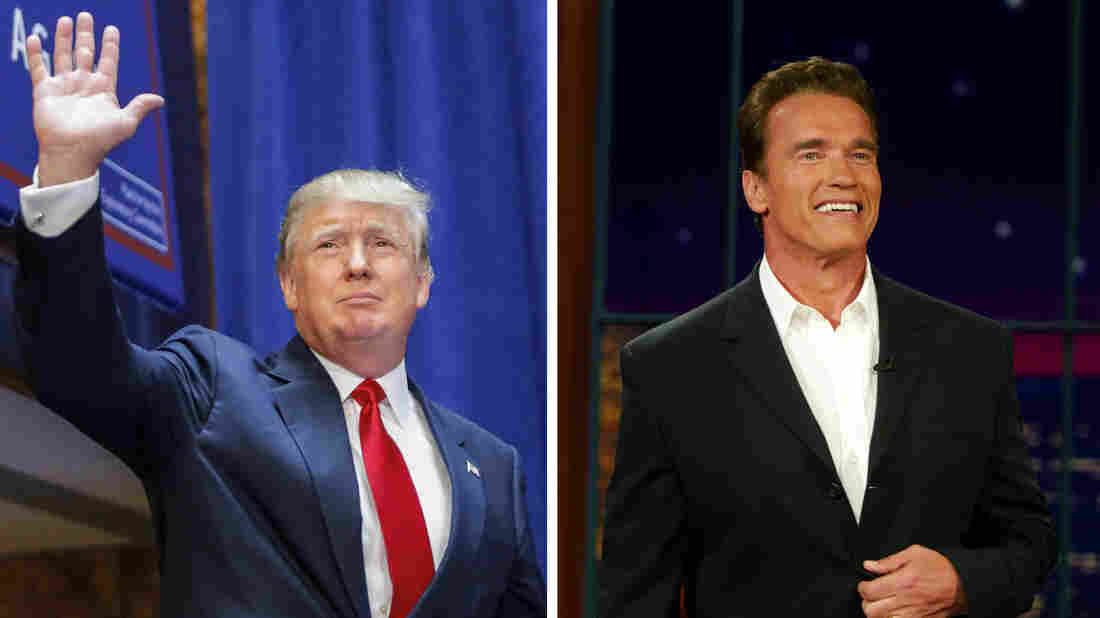 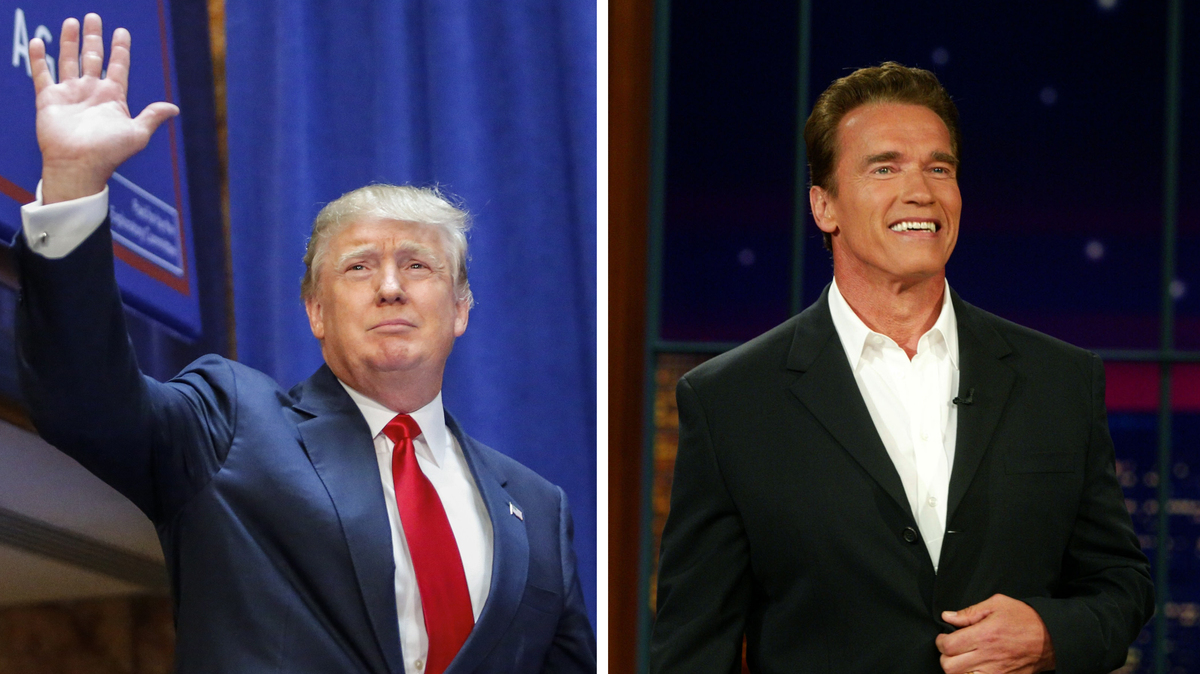 Donald Trump (left) arrives to announce his bid to run for president on June 16. Arnold Schwarzenegger (right) appeared on the Tonight Show with Jay Leno and announced he was running for governor of California on Aug. 6, 2003.

Donald Trump has used his wealth, his celebrity and his blunt manner of speaking to blast his way to the top of the polls in the GOP presidential race. It's a phenomenon that's had pundits — and some voters — scratching their heads. Except in California, where larger-than-life celebrity candidates are, like, so 12 years ago.

That's when Arnold Schwarzenegger announced he was running for governor of California. And he did it in his own inimitable way, on the Tonight Show with Jay Leno.

"It was the most difficult decision that I've made in my entire life," said Schwarzenegger, with mock sincerity, "except the one in 1978 when I decided to get a bikini wax."

It was a signal that Schwarzenegger was not going to change his flamboyant personality to become governor. A moderate Republican, Schwarzenegger criticized California lawmakers as spending addicts in thrall to special interests. And in the recent Republican debate, Donald Trump showed even less respect for the current crop of elected officials, saying "Our leaders are stupid. Our politicians are stupid."

And, like Schwarzenegger, Trump has said his personal wealth means he can't be bought by campaign contributors. He recently told CBS's Face the Nation that he'd turned down a $5 million donation from "a very important lobbyist" because there would be strings attached.

As much fun as it is to fixate on the similarities between Schwarzenegger and Trump, there's a significant difference between them, said former Republican consultant Dan Schnur, now the head of the Jesse Unruh Institute of Politics at the University of Southern California.

"Schwarzenegger used his celebrity in order to get attention for his policy agenda," says Schnur. "Trump talks about policy because he has to. But the real point of his message does seem to be his celebrity status."

Schwarzenegger, for example, vowed to reduce California's unpopular vehicle registration fee, the so-called car tax. He backed changes in the way elections are run, in the way the state bureaucracy runs, and he opposed driver's licenses for undocumented immigrants. Schnur said that things like that were the key to Schwarzenegger's being accepted as more than a side show.

"He didn't really start to move up in the polls until he expanded his message to talk about real matters of public policy," Schnur said.

But Schwarzenegger didn't let that make him boring. And Trump isn't either.

Both "are just content to be the characters that they've been all the time before they entered politics," says Raphael Sonenschein, the executive director of the Pat Brown Institute for Public Affairs at Cal State Los Angeles.

He says both Schwarzenegger and Trump convinced at least some of the voters that their kick-butt images from movies and television would easily transfer to governing.

"They do believe they have special talents that may not require a whole lot of critical analysis of their positions. That if they think it, it's probably a good idea. And if they snap their fingers, it can probably get done," says Sonenschein. And obstacles like other elected officials or other interests in society? They just say, "Well, don't worry about that. I'm sure it'll all be taken care of as soon as I arrive."

Schwarzenegger and Trump have also shared a bit of luck: running against large fields of candidates with no dominant front-runner. In Schwarzenegger's case, he ran in the recall election to replace former Gov. Gray Davis.

"There were about 103 candidates in the race," recalls Sonenschein, "and there was exactly one candidate that anybody knew. And that was Arnold Schwarzenegger."

But as the primary season goes on, Trump's long list of GOP rivals will eventually shrink. And with just a few opponents, his path to victory will become a lot tougher than Schwarzenegger's was.