Accessibility links
Donald Trump In 9 Quotes And 200 Seconds : It's All Politics Trump took his act on the road to Tennessee, where he thrilled a conservative audience with an off-the-cuff routine that bordered on stand-up comedy.

Wanted it 'so badly'

Donald Trump In 9 Quotes And 200 Seconds 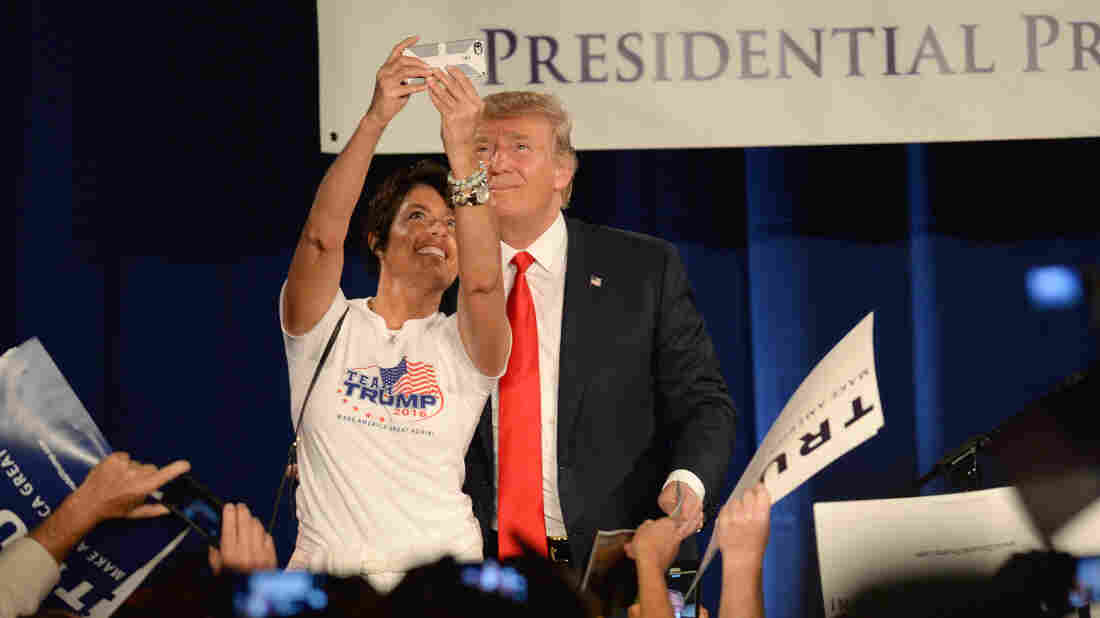 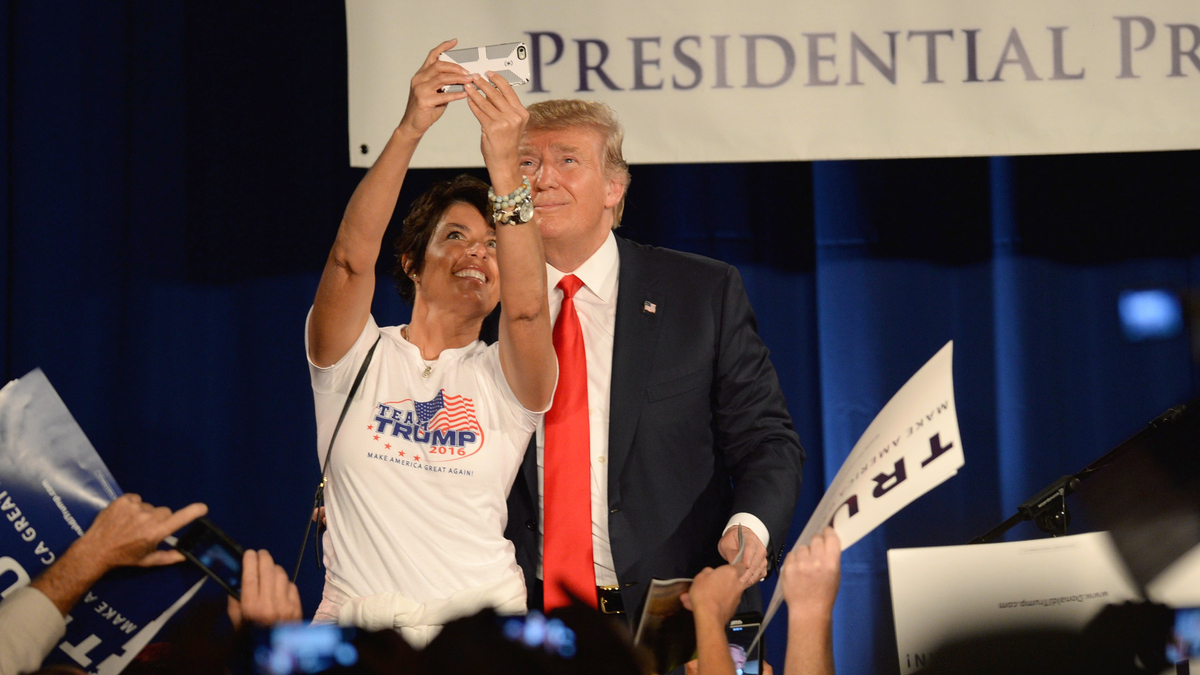 Donald Trump poses for a selfie with a woman wearing a "Team Trump" T-shirt on stage at the National Federation of Republican Assemblies Presidential Preference Convention in Nashville, Tennessee.

Donald Trump's been having a lot of fun at the expense of others lately.

On Friday night, he called Hillary Clinton aide Huma Abedin's husband, disgraced former Congressman Anthony Weiner, a "perv" and "one of the great sleazebags of our time."

He followed that up Saturday in Nashville, where, before a group that calls itself "The Republican Wing of the Republican Party," he likened the GOP debates that came before him to excrement.

"Maybe I should ask for a lot of money or I'm not showing up," Trump threatened, "because you know it's interesting — so they'll get let's say 2 million people, a million to 2 million people at the debates. You know, they've been doing them for a long time; they don't do great, especially the early Republican debate. Like, you know the expression, it draws flies, that's what it draws."

The first Republican primary debate in August got gangbusters ratings — 24 million people tuned into Fox, in large measure to see the Trump show. That was, by far, a record for a primary debate televised on cable.

Trump, speaking without notes as usual before the National Federation of Republican Assemblies, was free-wheeling. The crowd ate it up. Instead of listening to the hour-long address, here, in 3 minutes, are some quotes that stood out in Trump's speech:

1. Keeping the flies off the GOP debates:

2. Do that to me one more time: A 92-year-old woman, who looks "so beautiful," registered to vote for the first time because she hadn't seen anyone before "who really did it to her":

'Really did it to her'

3. Nashville, the birth place of Trump Tower? He recalled traveling to Nashville decades ago to try and get the property rights away from the company that owned the space that is now home to his beloved Trump Tower on Fifth Avenue in Manhattan. He called Nashville "special," professed, "I love country music," and said he made it a point to go to the Grand Ole Opry:

Wanted it 'so badly'

4. The impossible DREAM: He pitted DREAMers, people brought to the U.S. illegally when they were children, against veterans. He said DREAMers and other illegal immigrants are "treated better than our vets." (Buzzfeed reported on that time in 2013 when Trump met with DREAMer activists, who said Trump was skeptical but told them by the end of the conversation, "You convinced me.")

6. Can't trust Democrats OR Republicans: Trump took aim at Republicans, saying when they go to Washington, they become enamored with the glitz of the "incredible" and "magnificent" vaulted ceilings in the Capitol. "They go to Washington, something happens. They become weak. ... They walk into these magnificent buildings with those incredible vaulted ceilings and they go, 'Hoh, I made it darling. I made it.' " Not something conservatives have to worry about with Trump, of course.

'Just as angry with the Republicans'

7. Poll position: Trump again trolled Jeb Bush, calling him a "low-energy person" and marveling at his own ability to lead in Florida, despite the state's former governor and a current U.S. senator from there in the race. He then poked again at South Carolina Sen. Lindsey Graham, someone who's cell-phone number Trump read aloud during a live televised event this year. Trump said when he saw he was leading in South Carolina, he wrote Graham a note, just to rub it in. "Congratulations, I'm only beating you in your home state by 26 points," Trump said he wrote. "So — anyway, who cares?"

8. Trump says he doesn't care if you like him – it's not important ... : He said likability isn't going to win this election. He said it's about "competence." "I really want to be a nice person," Trump said. "I am a nice person, but I think it's actually going to be an election based on competence. We're tired of being, like, the patsy for everybody. I really do. I think it's time."