Accessibility links
20 Years After Historic Speech, Hillary Clinton Makes Appeal To Female Voters : It's All Politics Speaking in New Hampshire, Clinton tied the themes of her 1995 speech to her 2016 campaign. 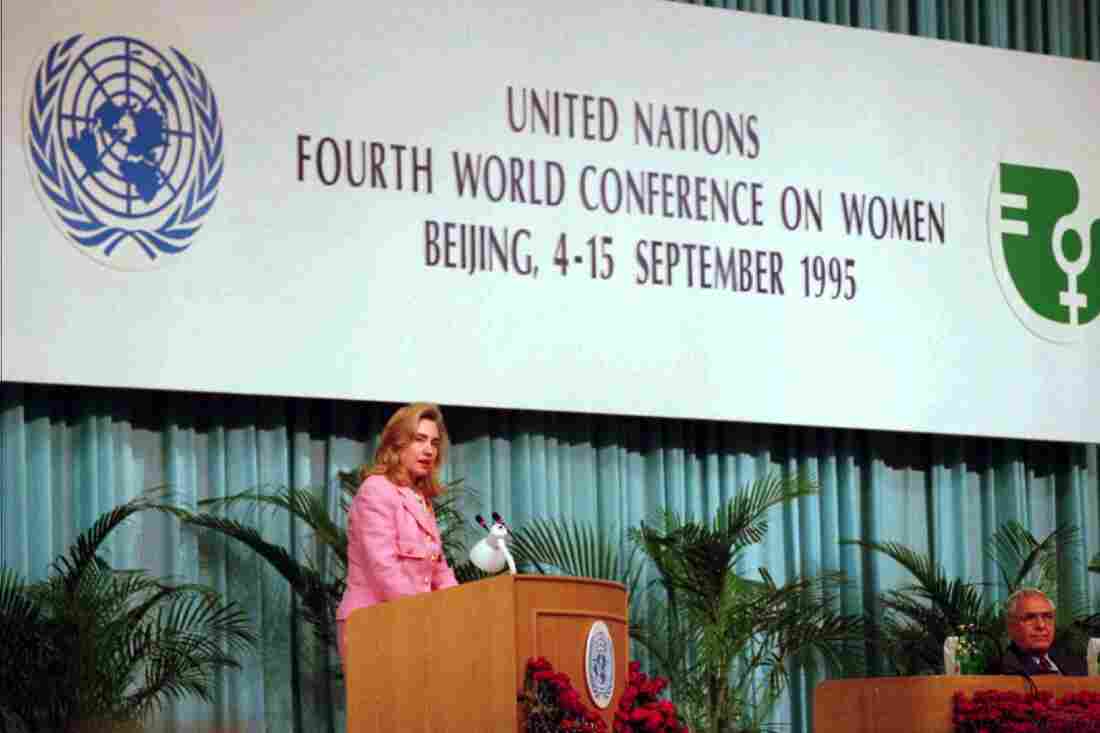 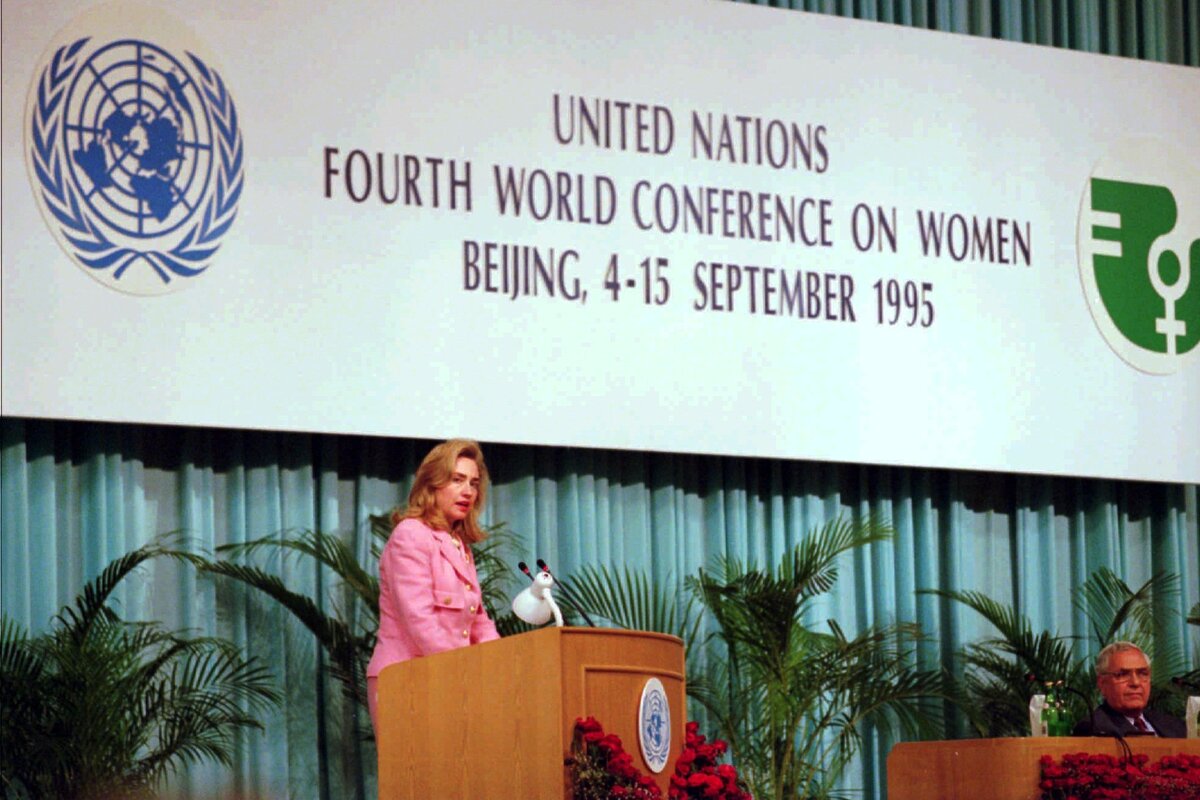 Hillary Clinton, then first lady, delivers a historic speech at a United Nations conference on women in Beijing, China, on Sept. 5, 1995.

Hillary Clinton is wrapping up what's been a difficult summer for her campaign with a memory of a standout moment in her political career.

In Portsmouth, N.H., this weekend, Clinton recalled a "special anniversary" – her speech on Sept. 5, 1995 to the United Nations World Conference on Women in Beijing, China.

"If there is one message that echoes forth from this conference, let it be that human rights are women's rights, and women's rights are human rights, once and for all," Clinton famously said 20 years ago in a speech confronting Chinese leaders over their poor record on women's rights. Clinton talked about poverty, violence, and lack of access to health care.

Marking the occasion Saturday in New Hampshire, Clinton echoed that message from 1995 — and linked it with issues she's been stressing on the campaign trail in 2015.

"What's good for women is good for America," she said, adding that equal pay, childcare, and family leave are not just women's issues, but economic ones.

"Too often these are called women's issues," Clinton said. "If you can't afford to go to work or find a safe place to leave your kids, you're not gonna have the kind of economic opportunity you deserve."

Clinton said men also have a stake in such policies, pointing out that many men are now caring for children and aging parents.

The speech allowed Clinton to showcase one of her strong suits, at a time when she needs to energize her base - which includes a significant share of female voters. Clinton's campaign continues to be dogged by questions about her private email server during her time as Secretary of State. In the past week, she's dealt with a new release of emails in response to an open records request, and the news that one of her former aides will exercise his Fifth Amendment right not to testify about the server before Congress. Hillary Clinton kicked off a campaign initiative targeted at female voters on Saturday in Portsmouth, N.H., where she received the endorsement of Sen. Jeanne Shaheen. Darren McCollester/Getty Images hide caption Hillary Clinton kicked off a campaign initiative targeted at female voters on Saturday in Portsmouth, N.H., where she received the endorsement of Sen. Jeanne Shaheen.

Clinton is also launching a "Women for Hillary" initiative this weekend. She picked up an endorsement from New Hampshire Democratic Sen. Jeanne Shaheen, the first woman in U.S. history to be elected both senator and governor.

Clinton drew cheers and applause from the crowd for lines attacking Donald Trump, who is leading Republican polls, for his statements about women.

"Mr. Trump insults and dismisses women," Clinton said, and mocked Trump's statement that he would be "far better" at addressing women's health issues than she would. "Now that's a general election debate that's going to be a lot of fun."

It's not just the general election, though, that Clinton needs to win. She's also up against an increasingly robust challenge for the Democratic nomination. Independent Senator Bernie Sanders of Vermont has been drawing large crowds all summer with his message of reducing the gap between rich and poor. His poll numbers are rising in key primary states. On the stump, he's talked about child malnutrition and called for paid family leave for new parents.

"I believe that raising incomes and supporting families is the defining economic challenge of our time," Clinton said. "And these are not new fights for me."