Accessibility links
The 'Teflon Don' And The Haunted Hill: A Contrast Of Media Narratives : It's All Politics For Trump, every instant of limelight is a chance to shine, even his apparent gaffes. But accusations against Clinton seem to attach themselves and cling to her for months — even years. 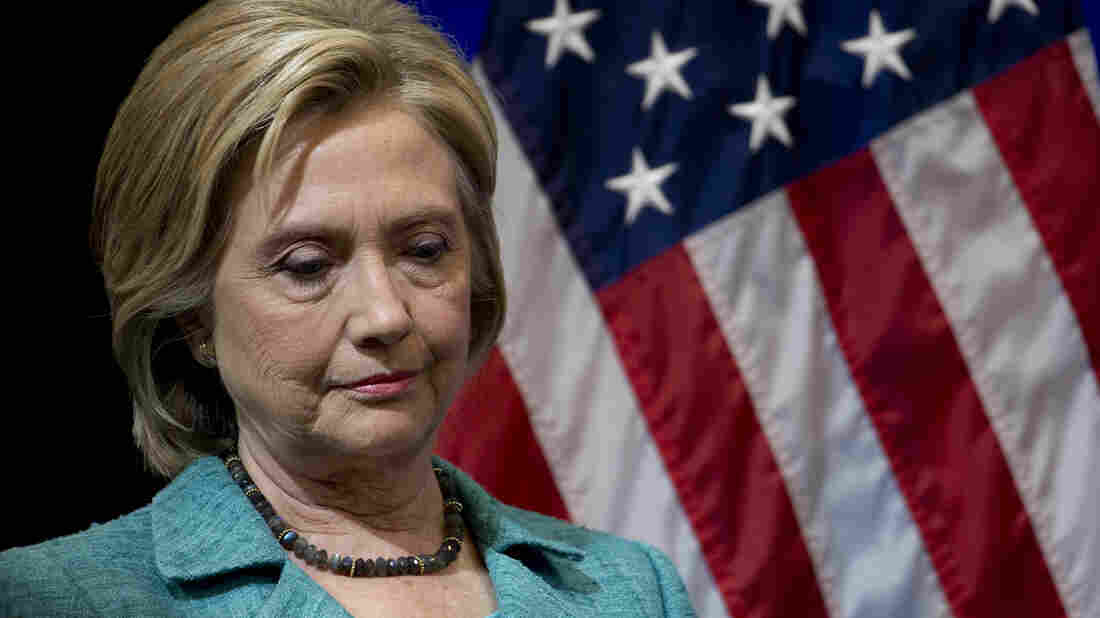 Democrat Hillary Clinton has been dealing with her ongoing email saga. It has gone on for months and has stuck. Compare that with Republican Donald Trump. All of his controversies have seemed to roll off him. Carolyn Kaster/AP hide caption 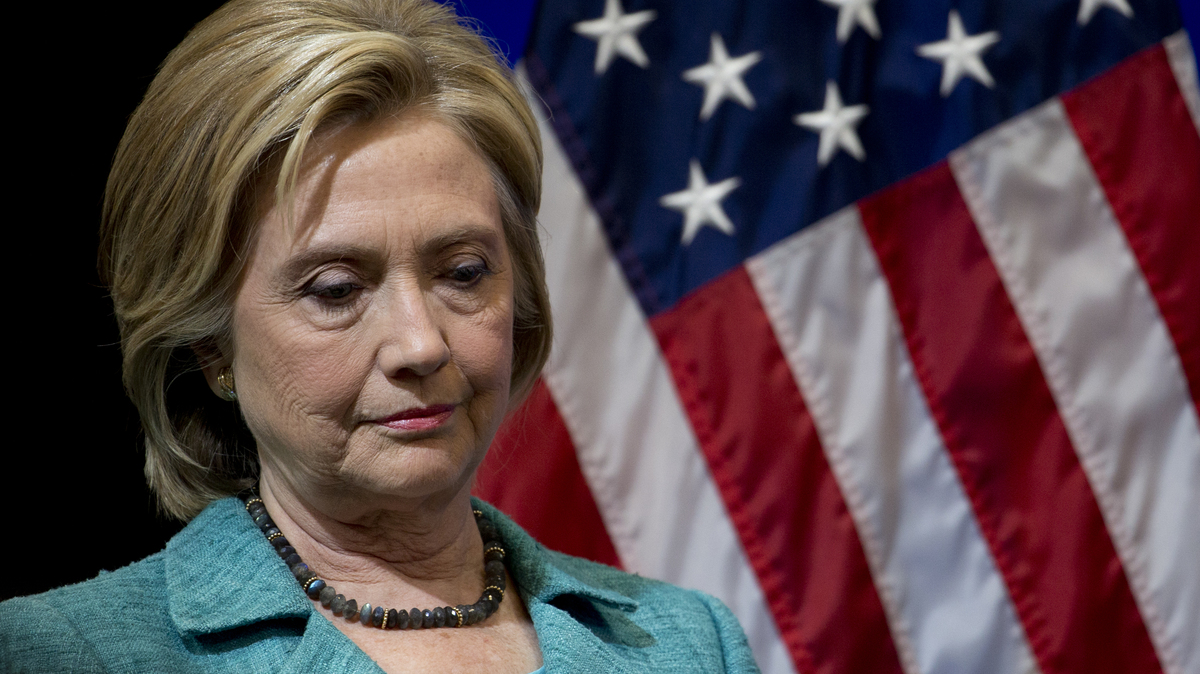 Democrat Hillary Clinton has been dealing with her ongoing email saga. It has gone on for months and has stuck. Compare that with Republican Donald Trump. All of his controversies have seemed to roll off him.

Donald Trump and Hillary Clinton currently dominate the 2016 presidential story, not only in the polls but in the news. Virtually everything either of them says is instantly seized upon to be celebrated or condemned by various media.

Surely no two candidates in the past have followed such profoundly disparate routes to the forefront of their respective parties. He rose as the bullying wheeler-dealer and TV "reality show" personality, vain even about his vanity. Her ticket says earnest do-gooder, dutiful political wife, serious senator and loyal Cabinet member.

And have any two candidates ever seemed so different in their handling of the media's hyper-attention?

For Trump, every instant of limelight is a chance to shine. Even his apparent gaffes enlarge and enhance a public persona already far larger than life. He takes on war heroes, star TV journalists and intraparty rivals — all with gusto and glee.

On Wednesday night, Rolling Stone magazine came out with Trump on the cover. In the article, Trump dismisses Republican Carly Fiorina because of her "face." "Would anyone vote for that?" Trump is reported saying. "Can you imagine that, the face of our next president?!"

Diving into every controversy from the NFL to the Middle East, he seems to know he will not get his famous hair mussed. He even invites people on stage to try, urging them to yank at his gleaming locks to prove they are his.

When Trump betrays ignorance about foreign affairs on an influential talk show, he accuses host Hugh Hewitt of asking "gotcha questions" and being unfair. He does not beg pardon. He does not give quarter.

And his numbers just keep going up.

Years ago a notorious New York mobster named John Gotti was known as the "Teflon Don" because three high-profile trials had failed to convict him. Nothing seemed to stick.

Consider the polar opposite scenario: the candidate whose vulnerabilities have swathed her in Velcro. Accusations thrown at Hillary Clinton seem to attach themselves and cling for months — even years.

Some of the slings and arrows aimed at her are minor and can be managed. She has been a target for a long time, dating back to her years as first lady, in Little Rock and Washington. There was a member of the House who devoted many hours of speeches in the 1990s to suggesting Hillary Clinton had been involved in the death of her husband's first White House counsel, Vince Foster.

But what has her supporters truly worried as this summer turns to fall is the candidate's proclivity for self-inflicted wounds. When she first revealed the existence of her personal, private email server and the extent she had used it for State Department work, she downplayed the potential damage. As recently as this summer she acted as though she did not know what it meant to "wipe the server" and thereby destroy potential evidence of wrongdoing.

This week, Clinton offered an apology of the kind that suggests one is really sorry for the fuss, not the infraction. "That was a mistake. I'm sorry about that," she told ABC News. "I do think I could have and should have done a bet­ter job an­swer­ing ques­tions earli­er."

Whether one considers this an indictable offense or merely an unforced error, it has become the first (if not the last) stumbling block in Clinton's path back to the White House.

Clinton has had trouble in the past when she stumbles and then struggles to regain her balance and momentum. Eight years ago this fall, she was cruising comfortably ahead of another pack of presidential aspirants on her way to a widely anticipated nomination in 2008. Half a dozen male contestants were far behind.

Then, just before Halloween, Hillary Clinton took a question from NBC's Tim Russert at a multi-candidate debate. It was about giving driver's licenses to people in the U.S. illegally. Clinton seemed to support the idea.

Sen. Christopher Dodd of Connecticut spoke up to object, saying such a license was "a privilege" and "goes too far." Clinton immediately backtracked. She said she had not said she would grant such licenses, only that she understood why the governor of New York wanted to do so.

It was the first highly visible misstep of Clinton's first bid for the presidency. And while alone it might not have amounted to much, it interrupted her attitude of inevitability. In the weeks that followed, she tried to explain herself without offending either side, but managed mostly to cloud the issue and give journalists something to criticize.

A month later, upstart Sen. Barack Obama of Illinois had nosed ahead of Clinton in the polls among Iowa Democrats. He went on to win the caucuses there and eventually to eclipse Clinton in the subsequent primaries.

So far, at least, there does not appear to be another Obama in the field for the 2016 Democratic nomination. But the memory of what happened in 2007, the loss of momentum at a crucial moment, still haunts the latest iteration of Ready for Hillary. Supporters will wonder whether this trip needs to become a fall, and whether this trip was really necessary.

The party nomination chase is still in its early stages. The Clintons were counted out many times in the past, all the way back to their loss in Arkansas in 1980. One is tempted to say they have climbed higher hills and been the stronger for it.

And who knows? Maybe Trump's protective coating will not last forever. Even that other Teflon Don eventually caught a charge he couldn't beat, leading to a life sentence. The Donald won't be going to the Big House, but he might not be going to the White House, either.