Accessibility links
From California, A Warning To Republicans On Anti-Immigration Rhetoric : It's All Politics In the 1990s, California passed a ballot measure to deny state services to people in the country illegally. It was overturned, but some say it's responsible for swinging the state heavily Democratic.

Listen · 4:56 4:56
From California, A Warning To Republicans On Anti-Immigration Rhetoric 4:56 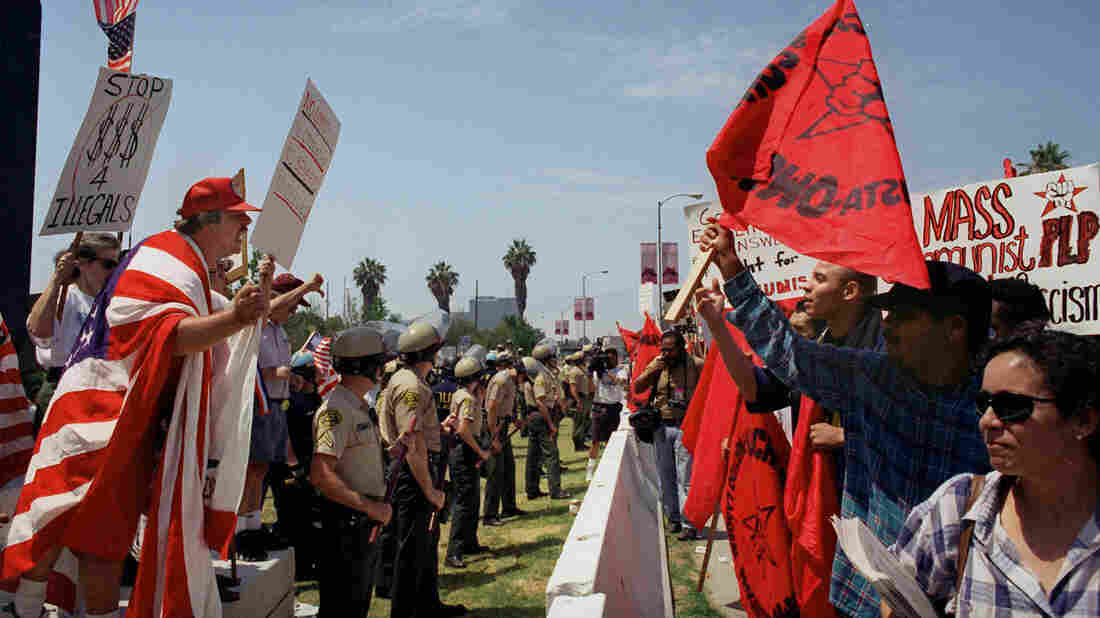 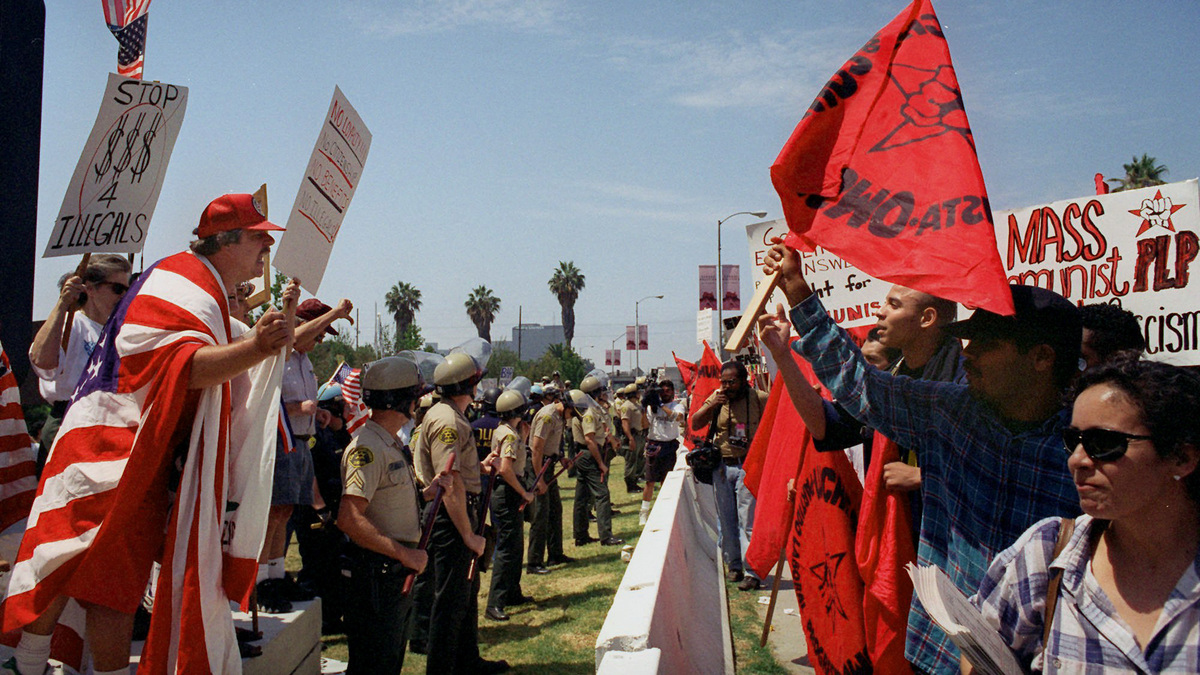 Activists for and against Proposition 187 rallied in Los Angeles in 1996, after it was thrown out by the courts. Political analysts say tough rhetoric and laws targeting illegal immigration could now have lasting political consequences for the national Republican Party.

Their talk about immigration echoes what Californians heard in the 1990s. That's when Proposition 187, a ballot measure viewed as strongly anti-immigrant, was a key to the re-election of California's Republican Gov. Pete Wilson.

Anyone who was in California in 1994 probably remembers the infamous campaign commercial for Wilson's re-election. "They keep coming," intoned the narrator over grainy black and white video of people dashing into traffic, as they cross the border from Mexico. "Two million illegal immigrants in California," he says over ominous music.

Wilson was linking himself to Proposition 187, a ballot measure to deny public services, including health care and education, to people in the country illegally. It won overwhelmingly and Wilson did, too. But 187 was thrown out by the courts.

And over the past two decades, Republican registration in California has plummeted. It's now just 28 percent.

"The moment when the Latino population is about ready to explode in California and have an impact on politics, the Republicans were pushing a very, very hostile agenda," said Damore. "The end result is, it's no longer a competitive state."

Damore is a senior analyst for Latino Decisions, a research and polling organization. He co-authored a study called the "Prop 187 Effect." One of those effects is the increase in voter registration and turnout among California Latinos.

Damore said his research also found that "folks who were not naturalized citizens, they increasingly became citizens so they could participate in the political process."

Now all California statewide offices — from governor to insurance commissioner — are held by Democrats. Democrats also have overwhelming majorities in both houses of the state Legislature and in California's congressional delegation.

Nationally, the Republican Party is aware of the California example. Its own postmortem of the 2012 presidential election, said "If Hispanics think that we do not want them here, they will close their ears to our policies." It also called for comprehensive immigration reform.

That was then. Donald Trump is now.

Mexican immigrants are "bringing drugs," Trump said when he announced he was running for president. "They're bringing crime. They're rapists. And some, I assume, are good people."

Now, Republican presidential hopefuls are increasingly taking up the issue of unauthorized immigration. For example, former Florida Gov. Jeb Bush has called for the elimination of "sanctuary cities," that is, cities that limit cooperation between local law enforcement and federal immigration authorities. Other GOP candidates — like Trump — support building a wall on the border with Mexico. Some have joined Trump in questioning the constitutional guarantee of birthright citizenship.

"Trump's entrance into race made it so that they had to discuss it whether they wanted to or not," said Republican political consultant Reed Galen.

He worked on the presidential campaigns of George W. Bush and John McCain. He thinks it's possible that the current harsh rhetoric on immigration could alienate Latino voters around the country, the way that Proposition 187 alienated them in California in the '90s.

"Latinos, who at [that] time might have been with the Republicans on any number of issues, be it the economy or social issues, thought, well, if this is something you're going to be for, then you probably don't like me."

That shifting attitude can now be seen on the national level, too, said Damore.

"George Bush in 2004 wins 39, 40 percent of the Latino vote" after supporting comprehensive immigration reform, said Damore. But just eight years later, "Mitt Romney's in the low 20s," after saying that people who come to the U.S. illegally should "self-deport."

"So there's a big swing in a relatively short amount of time there."

"As a Republican who has to go win elections, I would like more people to like our candidates than less," he said, laughing. "That's sort of a baseline."

But with Donald Trump leading in the polls, it's undeniable that the talk about illegal immigration has struck a chord with part of the Republican base, said Galen.

"Do I believe that it has the ability to derail the party?" he asks. "Absolutely. Is it a long-term concern? Absolutely."

But in the short term it's hard to get candidates to think about anything but winning the nomination.