Accessibility links
Fiorina Will Need To Stand Out, Not Just Stick Out, On Debate Stage : It's All Politics There's a lot at stake for Carly Fiorina at tonight's Republican debate. She joins 10 men on stage, including Donald Trump, who was recently quoted making negative comments about her face. 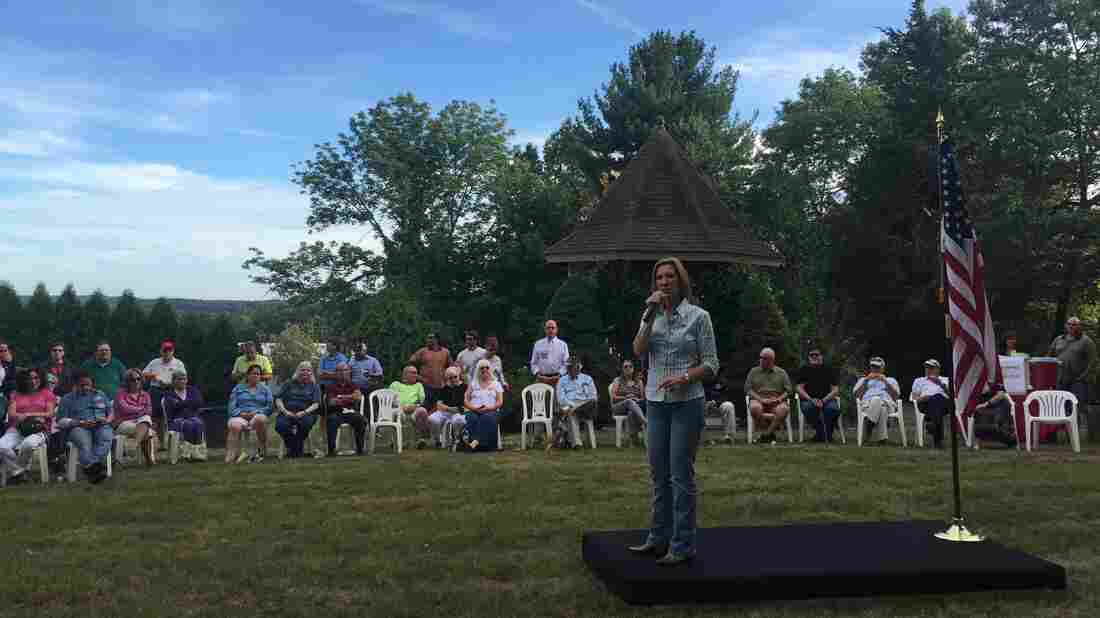 Fiorina speaks to voters in Dover, N.H., on Saturday. She has said of Wednesday's debate: "Many people don't know me yet. So it's an opportunity to introduce myself." Sarah McCammon/NPR hide caption 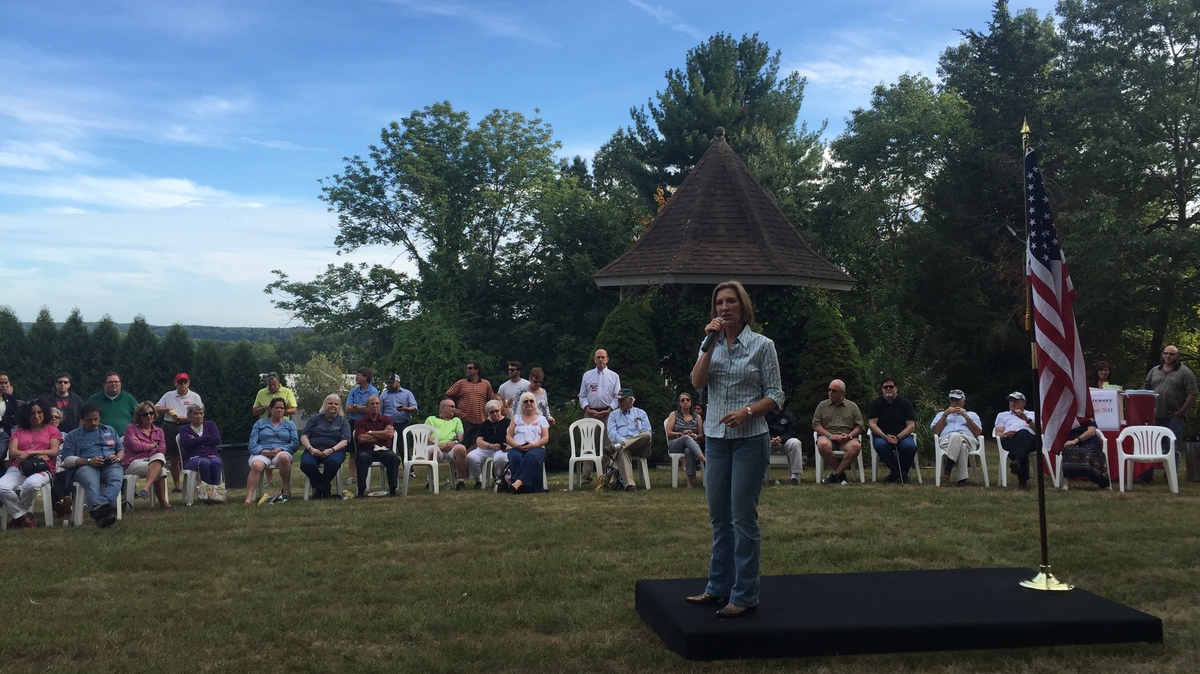 Fiorina speaks to voters in Dover, N.H., on Saturday. She has said of Wednesday's debate: "Many people don't know me yet. So it's an opportunity to introduce myself."

She has been able to give voice, I think, to the women of the country, who have for so long been frustrated.

When 11 Republican presidential hopefuls take the debate stage in California on Wednesday night, it will be Carly Fiorina's first time in the prime-time event. It's a big opportunity for an outsider candidate whose campaign has struggled to pick up steam, even as other outsiders are rising.

Fiorina will have to contend with one of them — Donald Trump — just one week after Rolling Stone quoted him as saying, "Look at that face!" and "Would anyone vote for that?"

In New Hampshire this past weekend, some voters seemed anxious to reassure Fiorina about her appearance. After a speech in Dover on Saturday, Allen Austin told her, "Donald Trump's got it all wrong," eliciting a polite murmur from Fiorina.

After a man called her "beautiful" during a question-and-answer session at a picnic in Chichester, the former Hewlett-Packard CEO said she appreciates her supporters' gallantry, but it's unnecessary.

"Honestly, does anyone think I care what Donald Trump thinks about my face?" Fiorina told the crowd.

Trump followed up his comments about Fiorina's face by saying he was talking about her "persona." He's told reporters he won't personally attack Fiorina at the debate.

It's an important chance for Fiorina to build on her standout performance in last month's forum for candidates at the bottom of the pack. Her poll numbers got a boost, earning her a spot in the main debate.

"Many people don't know me yet. So it's an opportunity to introduce myself," Fiorina told NPR.

Asked how she'd respond to any attacks from Trump, Fiorina said she'll "see what happens."

With the possible exception of Trump, media consultant John Brabender said, he expects the men on stage to be polite to Fiorina. Brabender is the top campaign strategist for former Pennsylvania Sen. Rick Santorum, who didn't make the prime-time debate.

"We use the term, 'Well, he went after that candidate; he hit him pretty hard.' Well, just that sort of phraseology makes us feel a little uncomfortable when we're talking about a woman on stage," Brabender said.

He also said being the only female candidate on stage will set Fiorina apart.
"When you have 11 men in suits and you have a woman there, by design, she's gonna stand out," Brabender said.

There will be 10 men on stage, plus Fiorina, of course — but she does need to stand out. Her candidacy hasn't caught on like the other Republican outsiders in the race — Trump, and retired neurosurgeon Ben Carson.

Fiorina isn't a total newcomer to politics; she lost a U.S. Senate race in California in 2010. She seems at ease shaking hands and signing autographs at barbecues, and making speeches to large and small crowds.

In Dover, Fiorina tried to close the deal with voters who may be considering her.

"In your heart of hearts, you all know that you can't wait to see me debate Hillary Clinton. Because you know I will bring it on," Fiorina said.

The only way to do that, she said, is to make her the Republican nominee. As the only woman running for the GOP nomination, Fiorina often campaigns as an anti-Hillary Clinton: a conservative woman with a hawkish stump speech. She criticizes Clinton's record as secretary of state and often brings up the controversy surrounding her private email server.

Fiorina said she'd use her business-world experience to shake up Washington. She proudly tells of being ousted from the top job at Hewlett-Packard in what she describes as a "boardroom brawl." She said she challenged the company's status quo, and she'd do the same as president.

For Jean Ray of Gilford, N.H., Fiorina has the "whole package" of values, experience and poise.

"She has been able to give voice, I think, to the women of the country, who have for so long been frustrated, as mothers, regarding security for our country, for our children, for our grandchildren," Ray said.

Fiorina seems to be making a serious play for female voters who disagree with Clinton's politics. In a new video produced by her superPAC, Fiorina leans in to Trump's comments about her face, saying, "This is the face of a 61-year-old woman. I am proud of every year and every wrinkle."