Accessibility links
John Kasich Is Partying Like It's 1999 : It's All Politics The candidate's message and even the way he interacts with voters are strikingly similar to his 1999 campaign, but his tastes in music have changed. 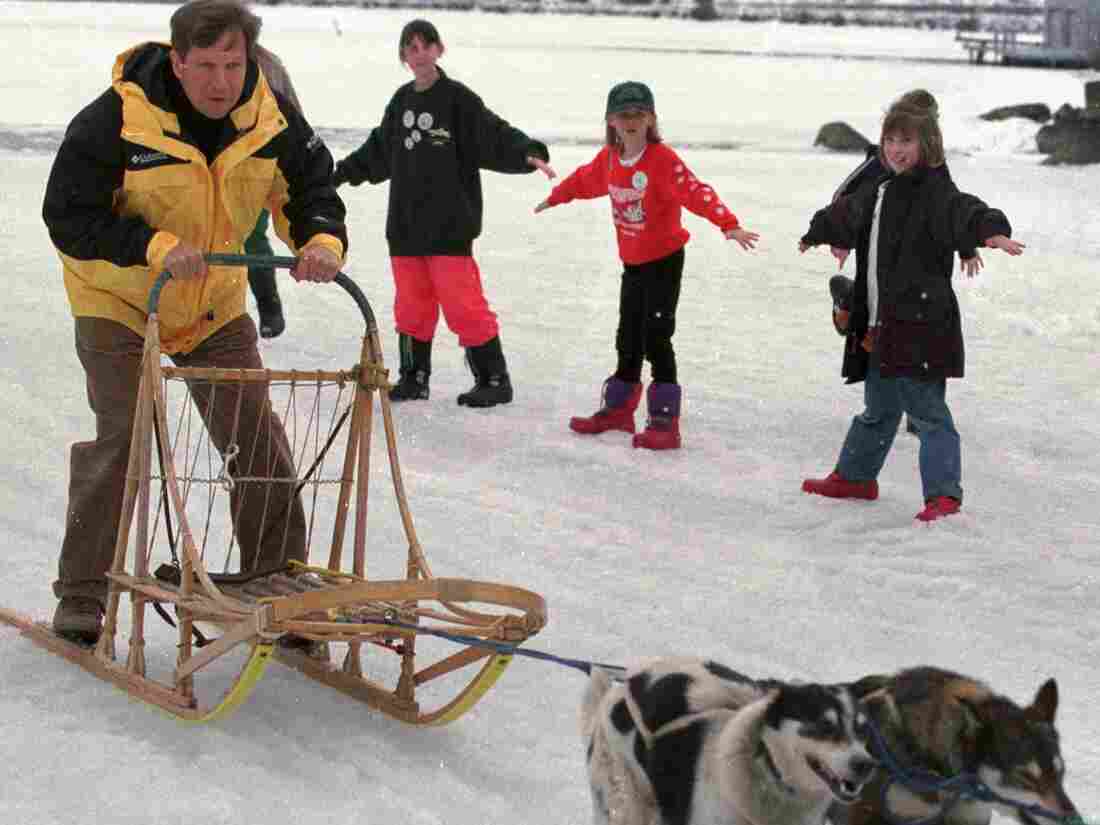 In 1999, then-Rep. John Kasich rode a dog sled after participating in the World Championship Sled Dog Derby award ceremony in Laconia, N.H. When he ran an "exploratory" campaign back then, few people knew who he was. Joel Page/AP hide caption 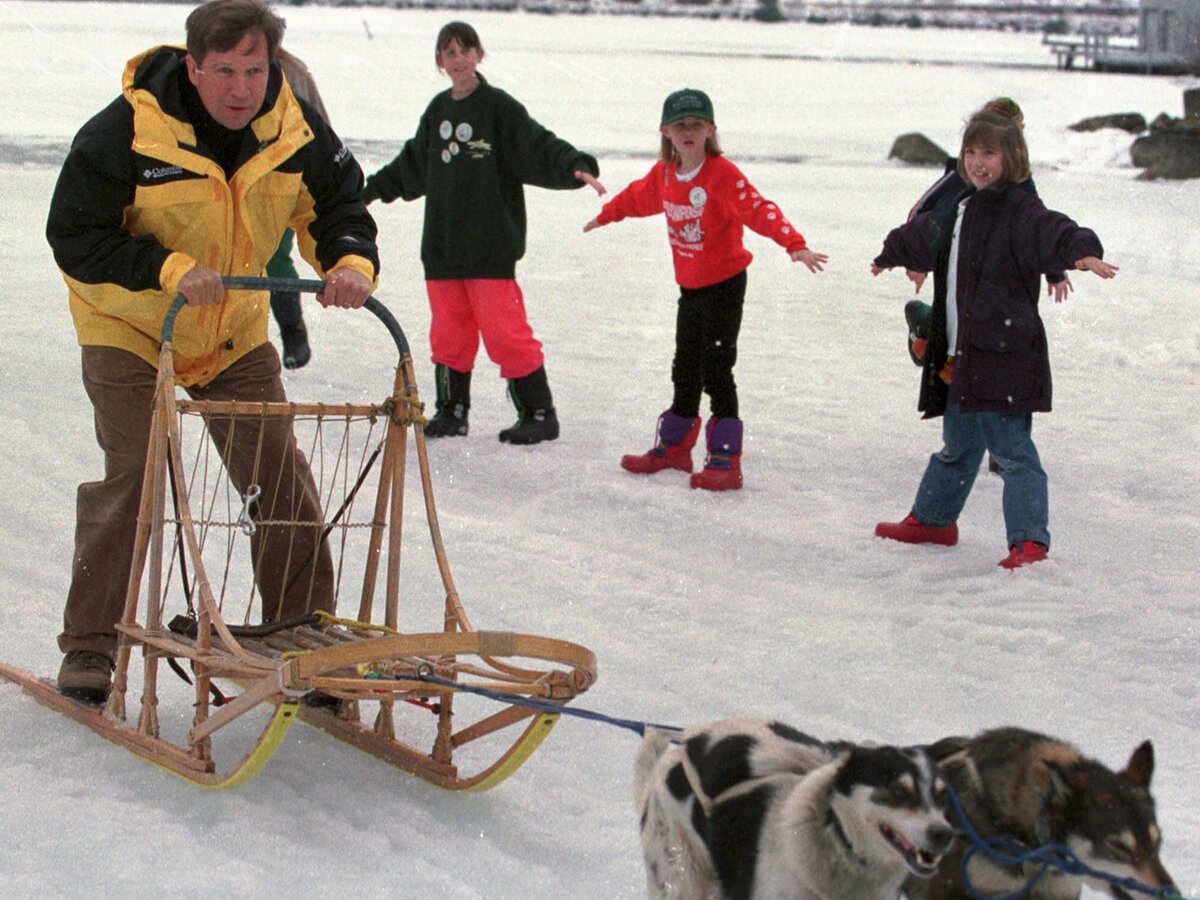 In 1999, then-Rep. John Kasich rode a dog sled after participating in the World Championship Sled Dog Derby award ceremony in Laconia, N.H. When he ran an "exploratory" campaign back then, few people knew who he was.

When talking to voters on the campaign trail, Ohio Gov. John Kasich likes to sum up the last time he ran for president in New Hampshire with a story. It starts with him talking to a potential supporter in Bow in 1999.

"We were standing at the sink and it was going great," Kasich said. "And I'm thinking, 'I've got myself a town captain here, there is no question about this.' And then after about 20 minutes, she looked at her watch, and she said: 'When do you think the candidate is going to get here?' That's when I knew it was time to go back to Ohio."

Sixteen years ago, a boyish-looking Kasich arrived in New Hampshire with an "exploratory" presidential campaign. The Ohio Republican was already a veteran of Congress at that point. And as chairman of the House Budget Committee, he had recently reached a balanced budget deal with the Clinton administration.

But even with that record, Kasich had a number of things working against him. Few people knew who he was, and he had no executive experience. And as a member of the House, Kasich was attempting to become the first sitting congressman elected president since 1880.

Still, he hit the campaign trail with enthusiasm. C-Span captured one moment in February of 1999, when Kasich and his wife, Karen, walked a snowy street in Merrimack, handing out fliers for what was then a cutting-edge tool in political campaigns: a website.

"Here, I'll just reach my hand in the door and shake your hand. Do you ever get on the Web? 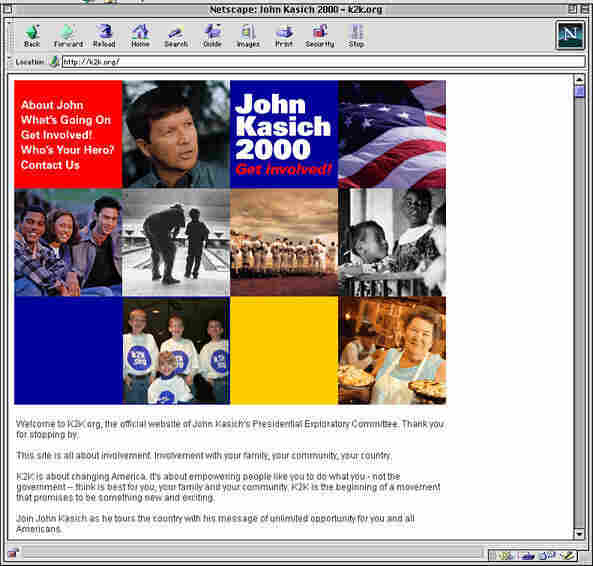 In February of 1999, Kasich and his wife, Karen, walked a snowy street in Merrimack, N.H., handing out fliers for what was then a cutting-edge tool in political campaigns: a website. Courtesy NHPR hide caption

"Well, if you ever want to, that's how you do it. Tell your dog we said hello. And thank you."

Kasich was entering the race at a time when the Republican field was dominated by the looming candidacy of George W. Bush. Bush was the two-term governor of Texas, the son of a former president, and already had a massive fundraising operation.

Referring to himself as the 'Jolt Cola' candidate in a world of Coke and Pepsi choices, Kasich hoped to emerge as the energetic alternative to this front-runner.

"He just hoped that, through sheer force of personality — which he had plenty of then, has plenty of now — that he could somehow break through," said Howard Wilkinson, who has covered Kasich for more than 30 years as a reporter based in Cincinnati. He said the campaign Kasich ran in 1999 is largely the same one he's running today.

"If you could go back in time and follow him around for a day, you'd find it'd be a very similar type of experience," Wilkinson said. "It would just be a guy with not so much gray in his hair."

The message of smaller government and personal responsibility, packaged in compassionate, and at times spiritual, language is certainly common to the Kasich campaigns of 1999 and 2015.

He even interacts with voters in strikingly similar ways, as when he chats about his taste in music. The artists, however, have changed. In '99, it was Will Smith and Pearl Jam; today it's Linkin Park and The Killers.

Kasich's campaign strategy to emerge as the energetic alternative to George Bush in New Hampshire worked — just not for him. John McCain became the "Jolt-Cola" candidate Kasich had hoped to be and went on to win the 2000 New Hampshire primary by a healthy margin. Months earlier, Kasich had already dropped out of the race. In his concession speech, Kasich endorsed the eventual president.

"George Bush's term of compassionate conservative really kinda defines what John Kasich is all about," he said at the time. "And many times when I watched the governor delivering a speech or an interview on television, I swear I could have turned the sound down and put my own voice in there. And so I feel as though I have a soul brother." 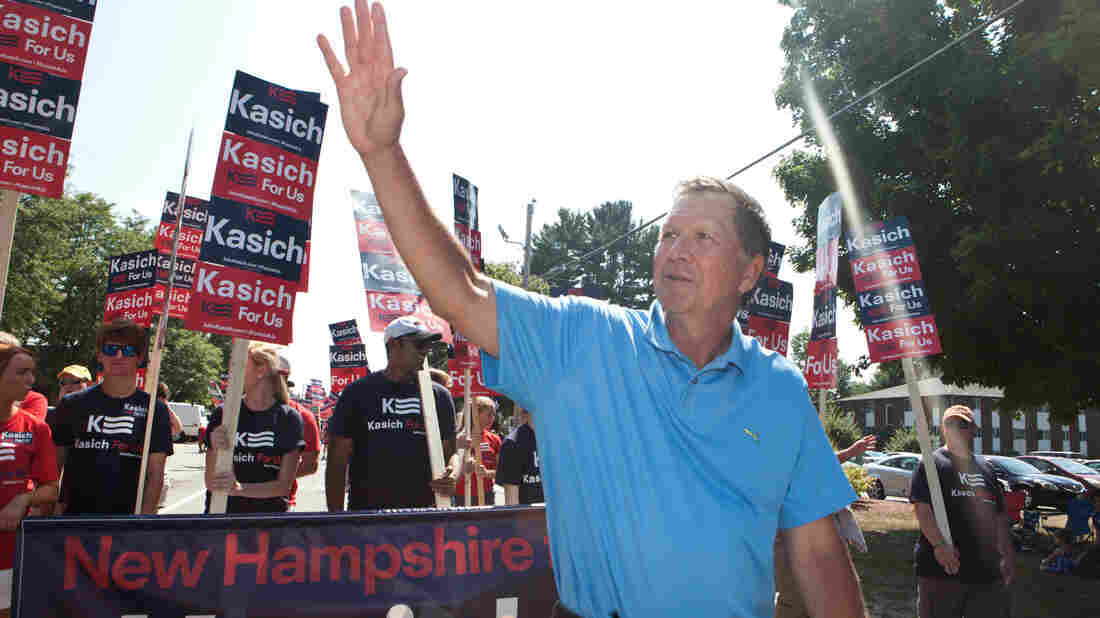 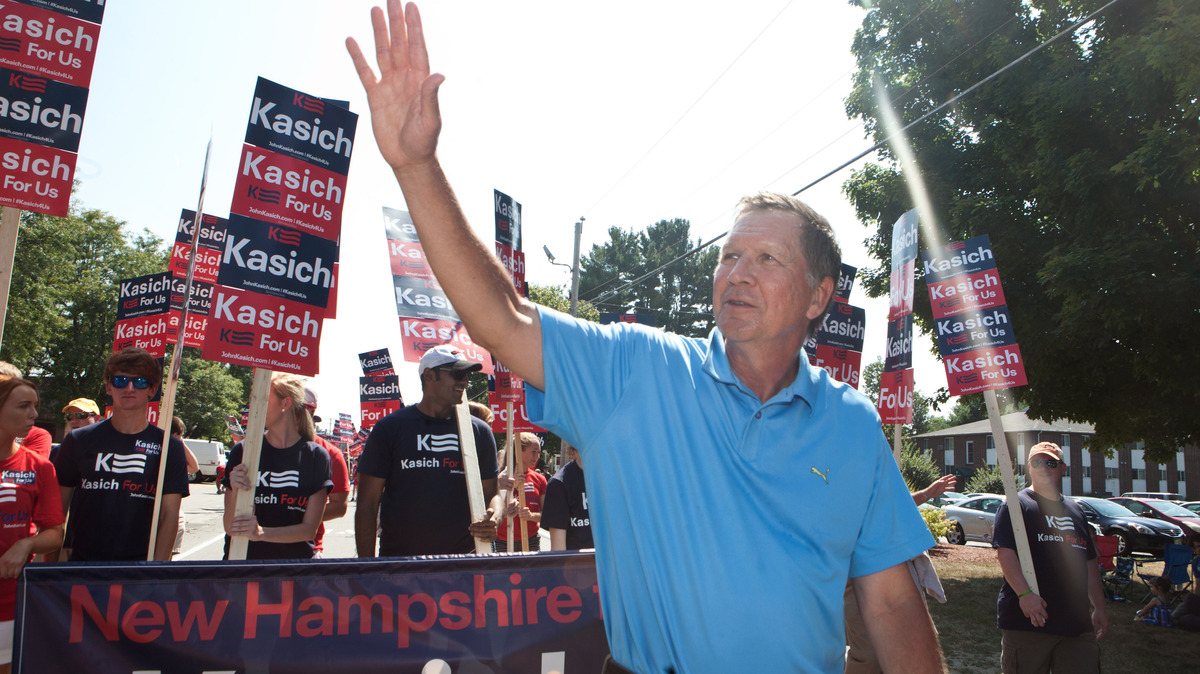 Sixteen years later, Kasich is back in New Hampshire; only now he's facing that soul brother's actual brother: Jeb Bush. And 15 other candidates.

In the interim, though, Kasich has been building his resume. He has worked as a Fox News host, as an investment banker with Lehman Brothers, and as governor of Ohio for the past five years. Asked at a recent campaign event in Henniker how he's changed over the years, Kasich responded this way:

"My faith has gotten deeper. Now why does that matter? Because it gives me perspective. It doesn't make the world so close."

Whatever perspective Kasich now holds, he finds himself grounded in a Republican Party that has changed quite a bit over the past 16 years. The rise of the Tea Party and a growing anti-establishment sentiment may put his brand of compassionate conservatism in a new, somewhat harsher, light.

But if the political landscape has shifted over the years, Kasich the candidate hasn't really, at least in the eyes of his supporters.

Bruce Berke is a Concord lobbyist who has known Kasich since the 1990s.

"When Gov. Kasich first came back to New Hampshire in 2015, in March, he said, 'Bruce I'm gonna go over with you what I plan to say tomorrow at the Politics and Eggs.' " Berke recalled. "So he went through it and he said, 'What'd you think?' And I said, 'Governor, I could have closed my eyes, and it could've been 1999 all over again.' "