Accessibility links
Scott Walker Ends Presidential Campaign With A Shot At Trump : It's All Politics The Wisconsin governor bemoaned the rise of negative attacks in the GOP race, urging his remaining rivals to unite to stop front-runner Donald Trump.

Scott Walker Ends Presidential Campaign With A Shot At Trump

Scott Walker Ends Presidential Campaign With A Shot At Trump 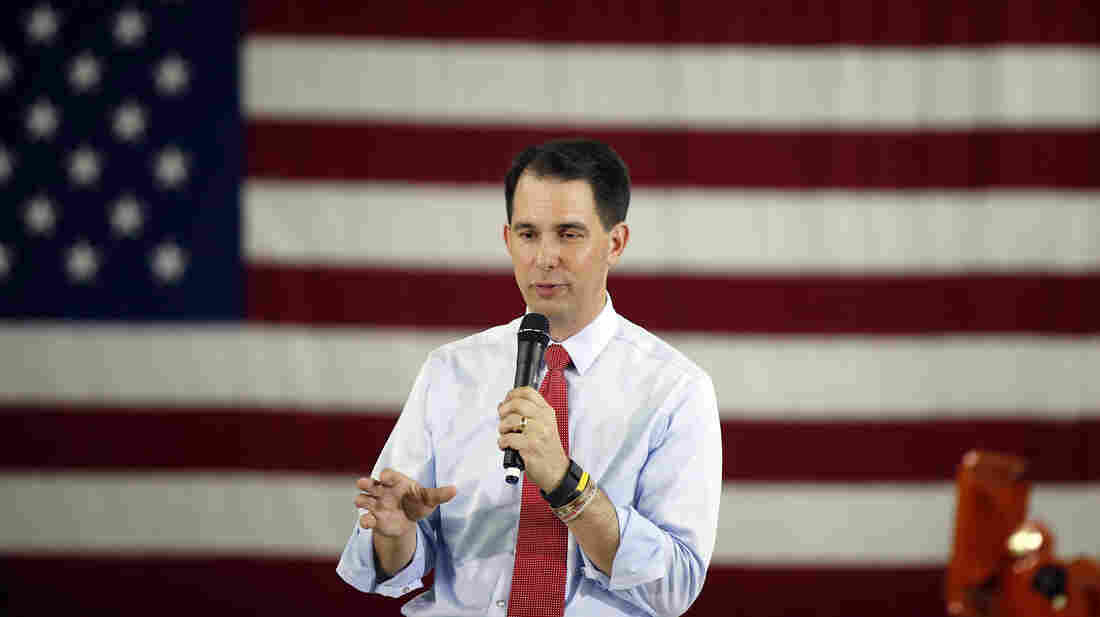 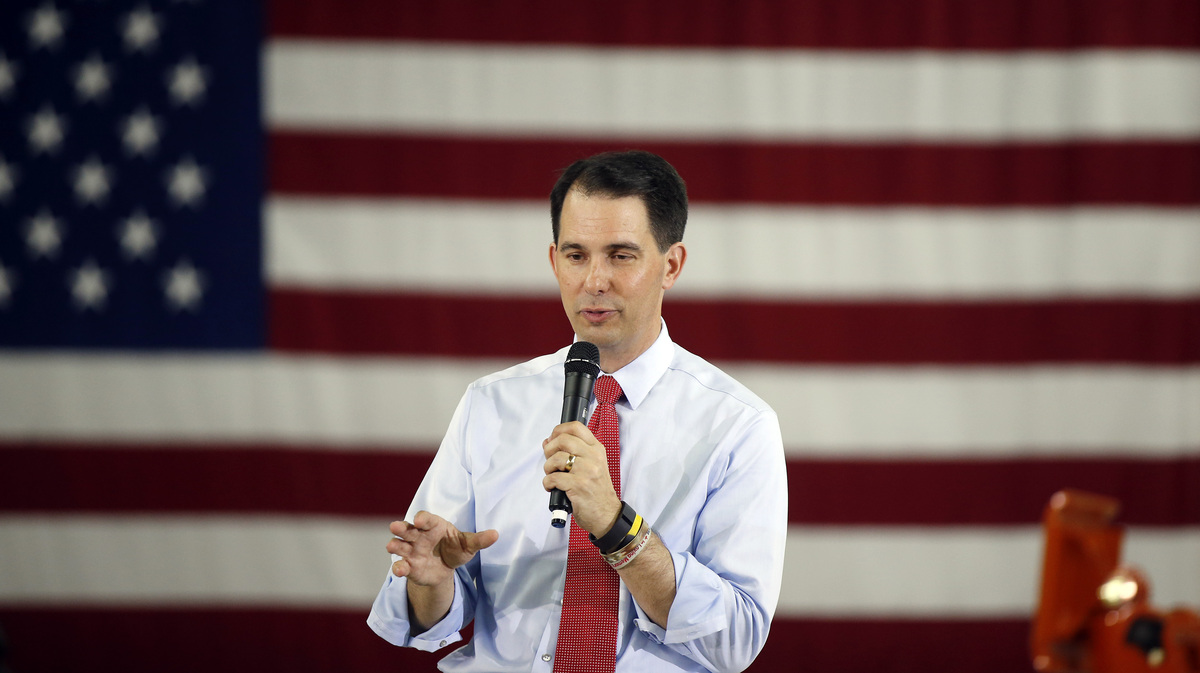 Wisconsin Gov. Scott Walker ended his campaign for president Monday, capping off a rapid rise and equally rapid fall in the GOP race.

At a brief 6 p.m. ET press conference in Madison, Wis., Walker said he was suspending his White House bid, in part, to stop the current GOP front-runner Donald Trump. 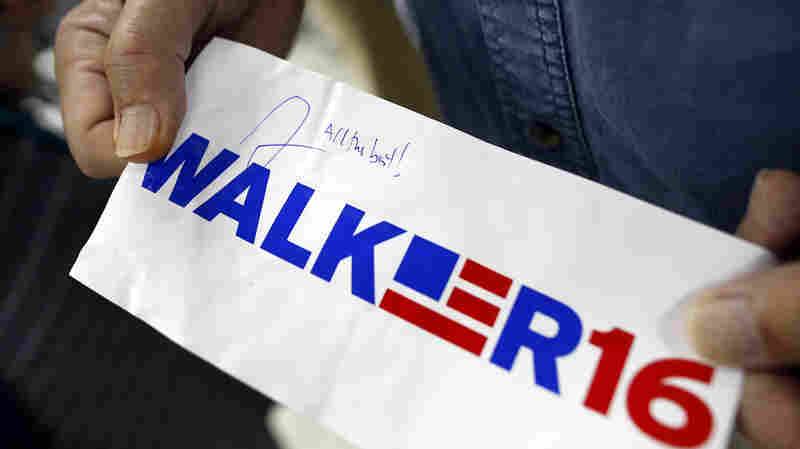 A supporter displays an autographed sticker for Walker at a town hall. Isaac Brekken/AP hide caption 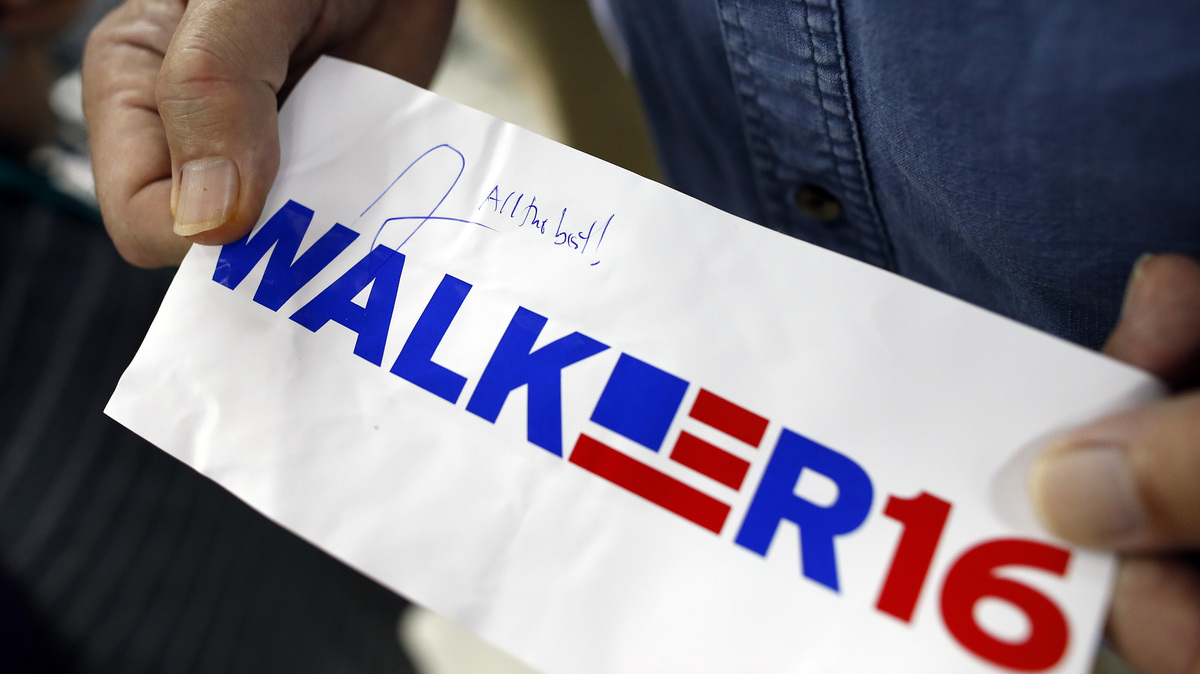 A supporter displays an autographed sticker for Walker at a town hall.

"Today I feel I am being called to lead by helping to clear the field so that a positive, conservative message can rise to the top of the field," Walker said.

Though he never referenced Trump by name, his finger-pointing was clear as he bemoaned that the optimism personified by Ronald Reagan in the Republican Party had instead "drifted into political attacks."

Walker's exit winnows the GOP field to 15, and his departure follows former Texas Gov. Rick Perry's decision earlier this month. Walker echoed Perry's withdrawal, referencing the crowded field and urging his rivals who weren't near the top to also consider their options and how a divided electorate might be benefiting Trump.

"I encourage other Republican presidential candidates to consider doing the same so the voters can focus on a limited number of candidates who can offer a positive conservative alternative to the current front-runner," he continued. "This is fundamentally important to the future of the party and, ultimately, to the future of our country."

When Walker first entered the 2016 conversation, the Midwestern governor appeared to have it all — a blue-collar appeal to Tea Party voters with his anti-union crusades; crossover bona fides after winning three elections in four years in a swing state that excited the GOP establishment; plus, he was governor of a state that bordered a key early state — Iowa.

And in Iowa, he started out the far and away front-runner. He burst onto the scene in January with a fiery speech there and, soon after, soared to the top of the polls.

But by the time he officially launched his campaign July 13, political gravity had shifted. Trump, the boisterous billionaire businessman, was on the rise, as were other political outsiders. Walker got mixed reviews on the campaign trail and had stumbles in the press that led some to question whether he was ready for prime time.

By this month, in Iowa — once considered a must-win for Walker — he had fallen to the bottom. A poll released over the weekend from CNN/ORC showed Walker not even registering 1 percent nationally.

An uneven debate performance Wednesday did nothing to soothe the nerves of nervous donors, and there were rumors a campaign shake-up was near. Instead, it seems, Walker simply didn't see a path forward for his once-promising political ambitions.

Instead, Walker signaled he hoped his exit would benefit anybody but Trump and that several other candidates could take advantage of his departure.

Already on Monday, Walker's New Hampshire co-chairman had defected to the campaign of Florida Sen. Marco Rubio, who saw his stock rise in the past week after a strong debate performance.

Another Midwestern governor, Ohio's John Kasich, could pick up support too, along with former Florida Gov. Jeb Bush and Texas Sen. Ted Cruz. The glowing statements from his onetime rivals praising Walker quickly followed, and any of them would be lucky to have his support — and more important, his donors and staff.

While Walker's own campaign had reportedly been struggling to bring in cash, his main superPAC, Unintimidated PAC, was well-heeled. One of its major donors, the Chicago Cubs-owning Ricketts family, will be up for grabs. Walker had also been an early favorite of conservative billionaire businessmen Charles and David Koch, even winning their organization's straw poll just last month.