Accessibility links
GOP Presidential Hopefuls Walk Delicate Line On Pope Francis : It's All Politics There are more Catholic Republicans than ever running for president, but not all have embraced Pope Francis' more liberal statements and theology. 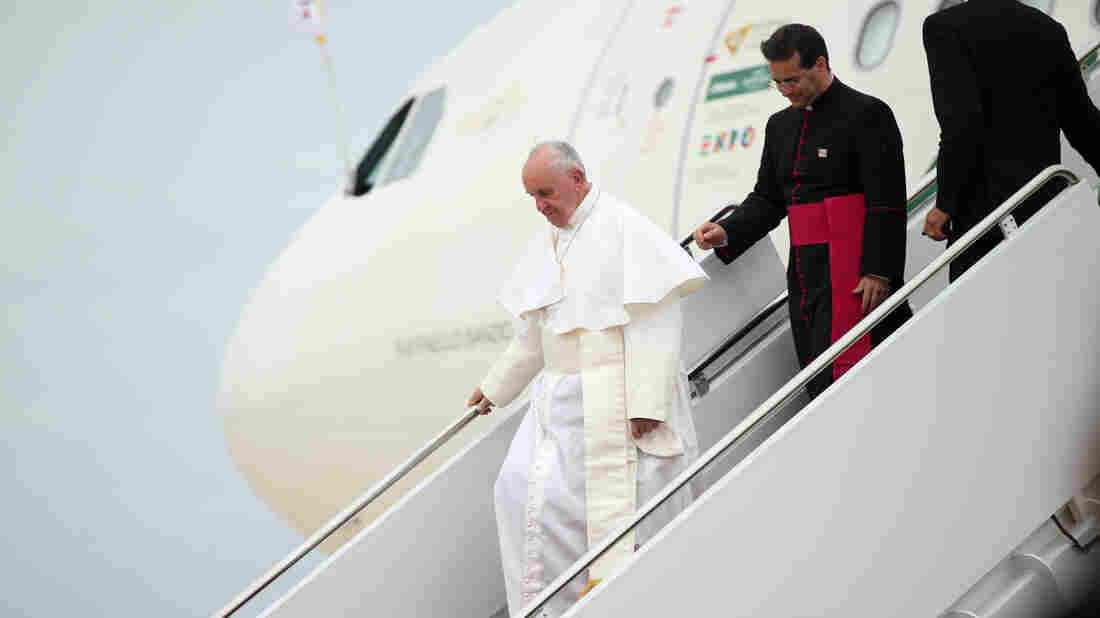 Pope Francis walks down the steps of his plane upon his arrival at Andrews Air Force Base, Md., on Tuesday. Andrew Harnik/AP hide caption 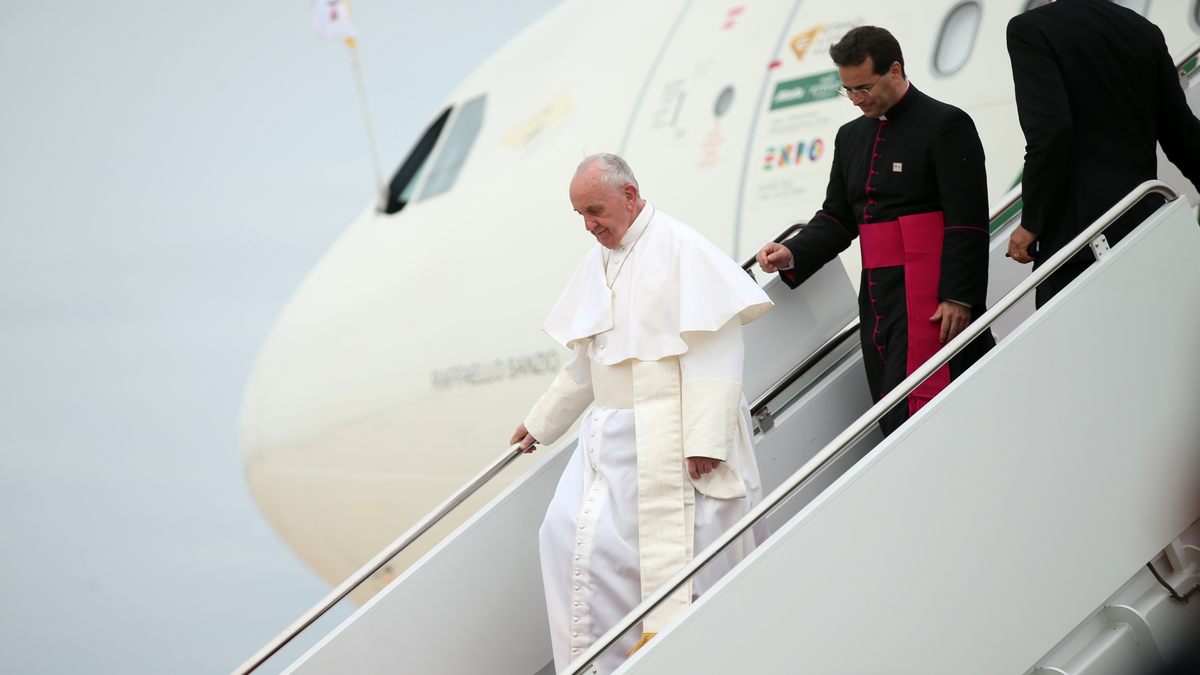 Pope Francis walks down the steps of his plane upon his arrival at Andrews Air Force Base, Md., on Tuesday.

There are more Catholics running for the GOP nomination for president than ever before, but the historic visit of Pope Francis to the United States has put them in an uncomfortable position.

Catholic popes have plenty they disagree with Democrats about. But Francis' positions on a handful of issues — like climate change, immigration, the Iran nuclear deal, Cuba policy and more — put him at odds with the Republican Party. And GOP leaders vying for the White House haven't exactly been rushing to embrace the pontiff.

"I just think the pope is wrong" on Cuba policy, Christie said on CNN's State of the Union this Sunday. "The fact is that his infallibility is on religious matters, not on political ones."

Rubio made similar comments on ABC's This Week, saying he follows Francis "200 percent" on religious issues, but that "the pope, as an individual, an important figure in the world, also has political opinions. And those, of course, we are free to disagree with."

Francis, of course, would argue that his political positions are rooted in religion — and scripture. NBC's Anne Thompson noted live on MSNBC during the pope's landing at Andrews Air Force Base on Tuesday that Francis told reporters on the plane traveling with him that for those who question his Catholicism, he can show them the creed if they want.

"Some people might say some things sounded slightly more left-ish, but that would be a mistake of interpretation," said Francis, who downplayed the political implications of his visit. "If you want me to pray the creed, I'm willing to do it."

Other Republican candidates seem to dismiss that.

Santorum, for example, also expressed skepticism earlier this year over some of Francis' stances.

Bush said earlier this year he doesn't "get economic policy from my bishops or my cardinals or my pope." But he also wrote an op-ed this week which reflected on his own conversion to Catholicism but also downplayed the political fervor surrounding the pontiff.

"The pundits would like to make him out to be a politician, but his charge is much greater than that," Bush wrote. "He is the spiritual leader to the largest group of Christians on Earth and an inspiration to all people of goodwill."

None of the 2016 hopefuls have gone as far as Rep. Paul Gosar of Arizona. Gosar, a Republican, is Catholic, but he announced he will be boycotting Francis' highly anticipated congressional address Thursday because of his position on climate change.

It's not a concern any more for most Americans that a Catholic politician would answer to the pope and Vatican — as it was before John F. Kennedy was elected president. But some of those politicians have come under fire from the church.

Previously, it's been Democrats mostly, and primarily over their support for abortion rights. The Boston archbishop denied communion to then-Sen. John Kerry, D-Mass., who was running for president. In 2008, a Scranton, Pa., bishop also said he would deny then-vice presidential candidate Joe Biden communion over his views on abortion as well.

Politics always seem to creep in. And it's hard not to view Francis' trip through a political lens. It will take on extra meaning during his address to Congress and given he's in the U.S. in the throes of a presidential campaign.

Francis has delved into political controversy more quickly than any other recent pope. As NPR's Danielle Kurtzleben reports, his views, like the Catholic faith generally, can clash with Republicans and Democrats. While Francis has shown a more liberal side on economics, the environment and immigration, he's still stood by the Catholic Church's long-held positions on social issues.

Francis' positions are really a matter of emphasis. Most recent Catholic popes have stressed the more conservative and dogmatic beliefs of the church. Francis has chosen to lean into Catholicism's social-justice teachings.

Still, the most interesting reactions will be from Republican Catholic hopefuls, who usually aren't in this position when it comes to popes.