Accessibility links
The 10 Most Political Moments In Pope Francis' Address To Congress : It's All Politics The speech had something for everyone. It had several lines that might have made members of both parties uncomfortable — but mostly Republicans.

The 10 Most Political Moments In Pope Francis' Address To Congress

The 10 Most Political Moments In Pope Francis' Address To Congress 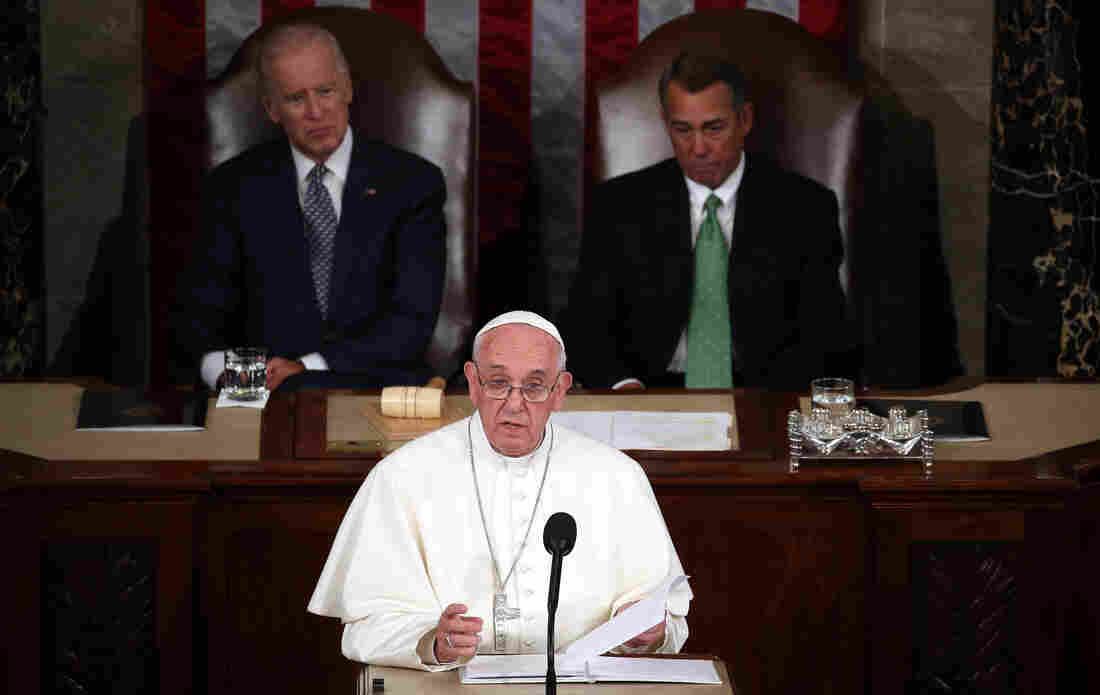 Pope Francis speaks in the House Chamber of the U.S. Capitol on Thursday. He is the first pope to address a joint meeting of Congress. Mark Wilson/Getty Images hide caption 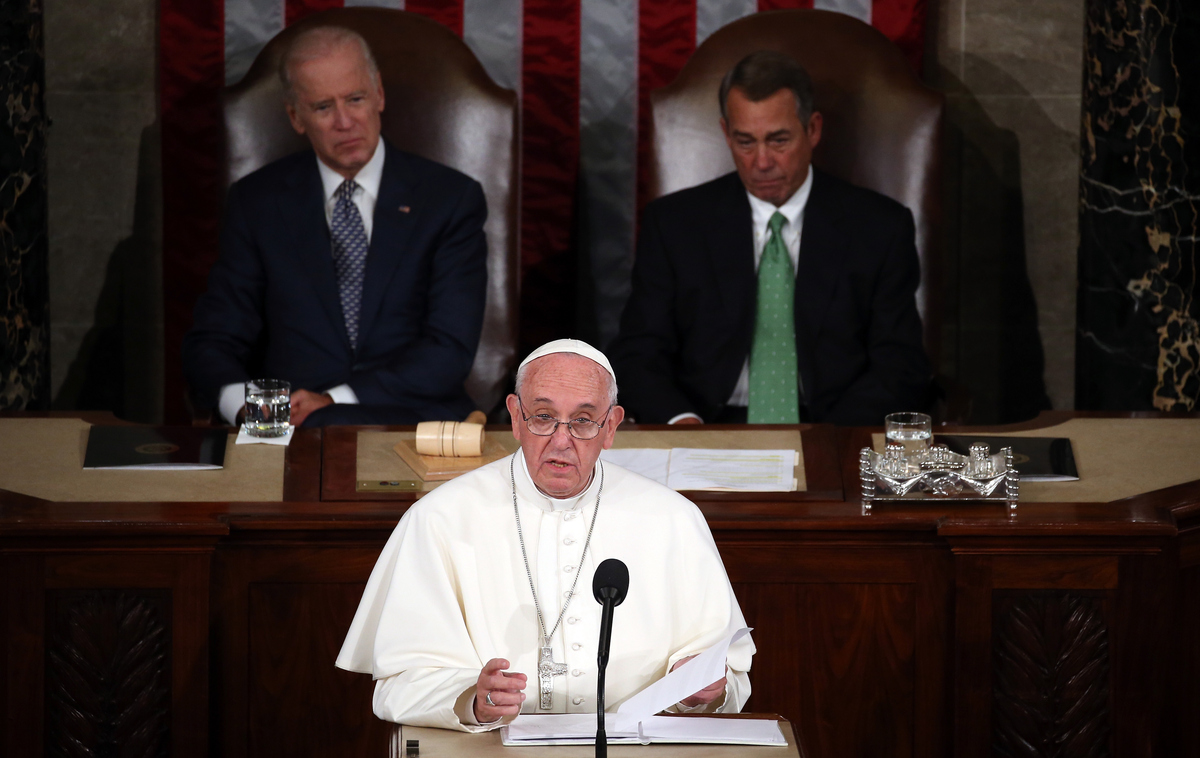 Pope Francis speaks in the House Chamber of the U.S. Capitol on Thursday. He is the first pope to address a joint meeting of Congress.

Pope Francis speaks his mind, and he did that again in his address to a joint meeting of Congress on Thursday morning. But, in the vein of the best Jesuit teachers, Francis praised America, its rich political history and its ideals before delicately delivering some things its political leaders might, well, want to consider working on.

There were political messages that challenged the orthodoxy of both American political parties, but, in this 51-minute address, there were a lot more points of emphasis Democrats are happy about — and that put some pressure on Republicans.

Here are 10 moments that stood out from his address: 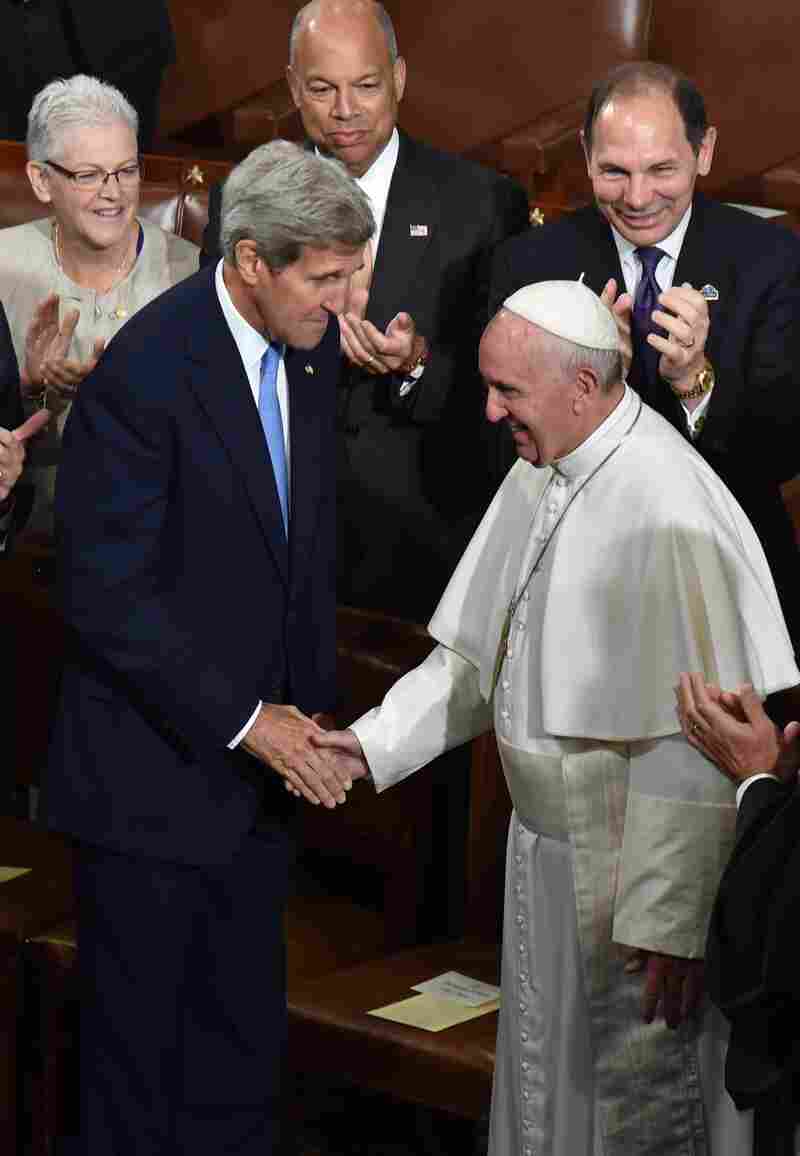 Secretary of State John Kerry's hand was one of the few he shook as he arrived to address Congress on Thursday. Paul J. Richards/AFP/Getty Images hide caption

1. Embracing John Kerry: The pope did not shake many hands on his way into the chamber, unlike during presidential State of the Union addresses when presidents seem to embrace everyone in the aisle they can find. But Francis did make a point of going over to Secretary of State John Kerry and shaking his hand. That is a major change from 2004, when church officials then called on denying Kerry communion because of his support for abortion rights when he was the Democratic nominee for president. This pope, by the way, has come out in support of the Iran nuclear deal. Kerry, as secretary of state, was a principal negotiator of the deal.

2. A call to rise above polarization: Francis warned against the "temptation" of "the simplistic reductionism which sees only good or evil; or, if you will, the righteous and sinners. The contemporary world, with its open wounds which affect so many of our brothers and sisters, demands that we confront every form of polarization which would divide it into these two camps." Later in his speech, he came back to this theme, saying, "A good political leader is one who, with the interests of all in mind, seizes the moment in a spirit of openness and pragmatism. A good political leader always opts to initiate processes rather than possessing spaces." He also noted one his heroes, American Thomas Merton, a Cistercian monk, who Francis said had "the capacity for dialogue and openness to God."

3. A call for the country to open its arms to immigrants and refugees: "I think of the march which Martin Luther King led from Selma to Montgomery 50 years ago as part of the campaign to fulfill his 'dream' of full civil and political rights for African-Americans. That dream continues to inspire us all. I am happy that America continues to be, for many, a land of 'dreams'. ... In recent centuries, millions of people came to this land to pursue their dream of building a future in freedom. We, the people of this continent, are not fearful of foreigners, because most of us were once foreigners. I say this to you as the son of immigrants, knowing that so many of you are also descended from immigrants." ...

"Our world is facing a refugee crisis of a magnitude not seen since the Second World War. This presents us with great challenges and many hard decisions. On this continent, too, thousands of persons are led to travel north in search of a better life for themselves and for their loved ones, in search of greater opportunities. Is this not what we want for our own children? ... Let us remember the Golden Rule: 'Do unto others as you would have them do unto you'. ... The yardstick we use for others will be the yardstick which time will use for us."

His reference to the Golden Rule was Francis' biggest applause line. Members of Congress didn't even let him get out the rule itself before giving him a standing ovation.

4. A reminder on abortion: Francis then pivoted and noted the conservative social issues the church believes in, particularly abortion: "The Golden Rule also reminds us of our responsibility to protect and defend human life at every stage of its development."

That received big applause from Republicans, but then Francis immediately went on to the flip side of the Catholic "pro-life" belief. 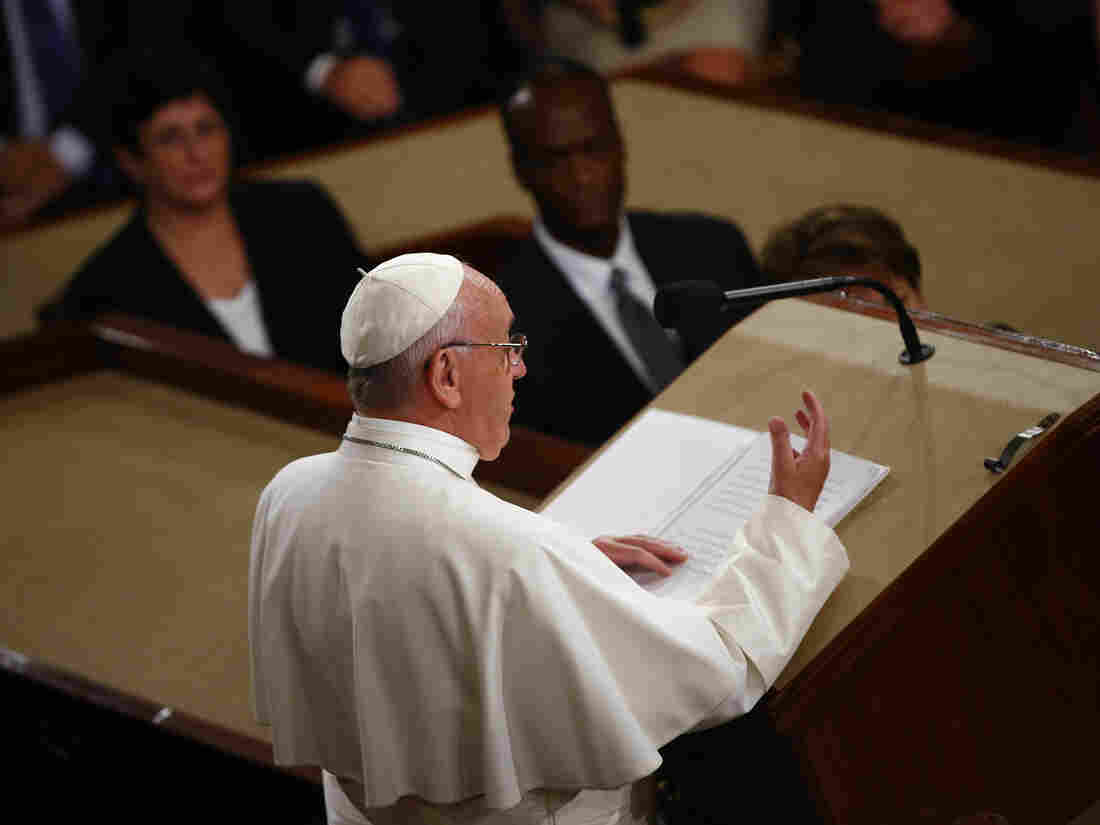 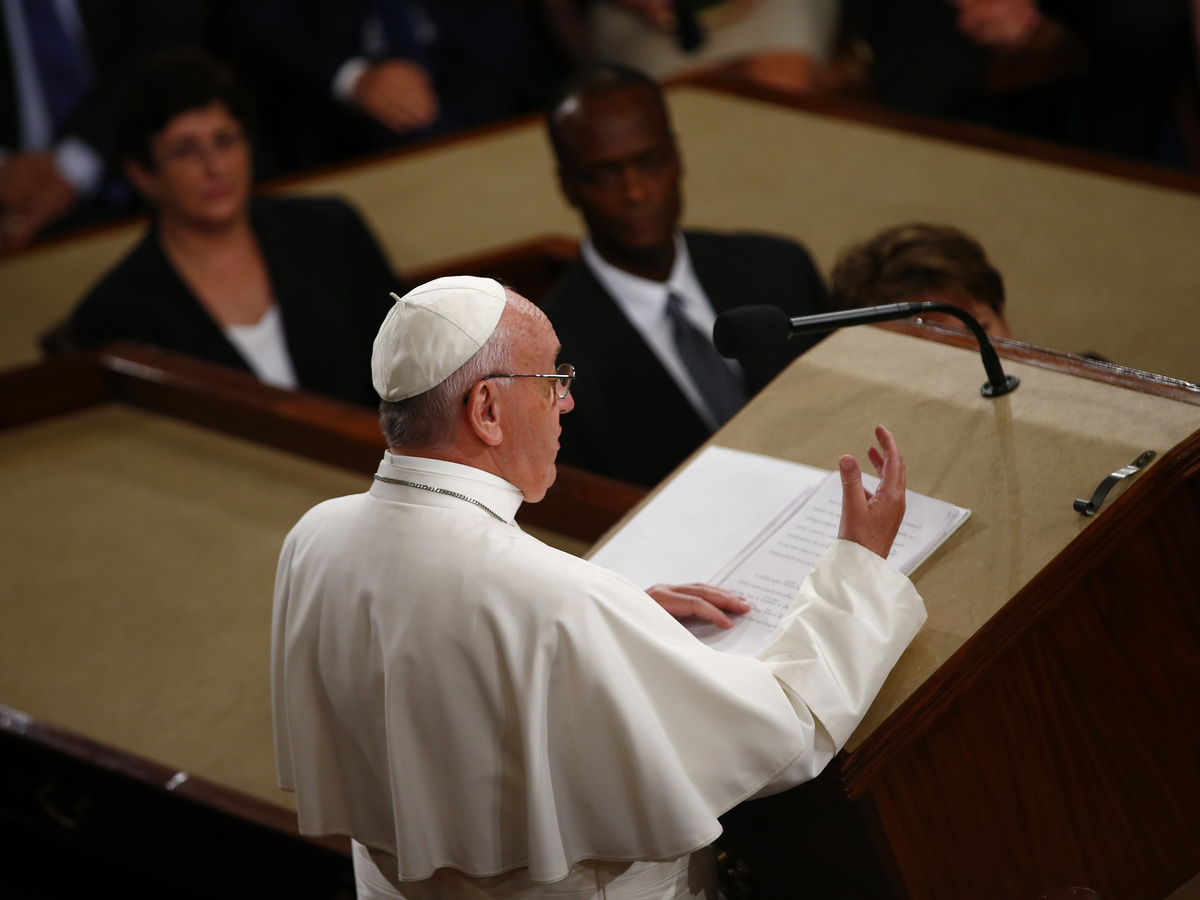 Pope Francis also strongly advocated for abolishing the death penalty and called on Congress to act on climate change.

5. Strongly advocating for abolishing the death penalty: "This conviction has led me, from the beginning of my ministry, to advocate at different levels for the global abolition of the death penalty. I am convinced that this way is the best, since every life is sacred, every human person is endowed with an inalienable dignity, and society can only benefit from the rehabilitation of those convicted of crimes. Recently my brother bishops here in the United States renewed their call for the abolition of the death penalty. Not only do I support them, but I also offer encouragement to all those who are convinced that a just and necessary punishment must never exclude the dimension of hope and the goal of rehabilitation."

6. Poverty and the necessity of 'distribution of wealth': "I would encourage you to keep in mind all those people around us who are trapped in a cycle of poverty. They, too, need to be given hope. ... It goes without saying that part of this great effort is the creation and distribution of wealth."

8. Calling on Congress to act on climate change: "This common good also includes the earth. ... I call for a courageous and responsible effort to redirect our steps, and to avert the most serious effects of the environmental deterioration caused by human activity. I am convinced that we can make a difference and I have no doubt that the United States — and this Congress — have an important role to play. Now is the time for courageous actions and strategies, aimed at implementing a culture of care and an integrated approach to combating poverty, restoring dignity to the excluded, and at the same time protecting nature."

9. Anti-war message and a call to stop arms trade: "Being at the service of dialogue and peace also means being truly determined to minimize and, in the long term, to end the many armed conflicts throughout our world. Here we have to ask ourselves: Why are deadly weapons being sold to those who plan to inflict untold suffering on individuals and society? Sadly, the answer, as we all know, is simply for money: money that is drenched in blood, often innocent blood. In the face of this shameful and culpable silence, it is our duty to confront the problem and to stop the arms trade."

10. The importance of family and marriage: "It is my wish that throughout my visit the family should be a recurrent theme. How essential the family has been to the building of this country! And how worthy it remains of our support and encouragement! Yet I cannot hide my concern for the family, which is threatened, perhaps as never before, from within and without. Fundamental relationships are being called into question, as is the very basis of marriage and the family. ... At the risk of oversimplifying, we might say that we live in a culture which pressures young people not to start a family, because they lack possibilities for the future. Yet this same culture presents others with so many options that they, too, are dissuaded from starting a family."