Accessibility links
A Day In The Life Of a 1 Percenter (1 Percent In The Polls, That Is) : It's All Politics The stagecraft — crowds, balloons, marching bands — of a presidential campaign is just a bit harder to muster when you're at 1 percent in the polls. 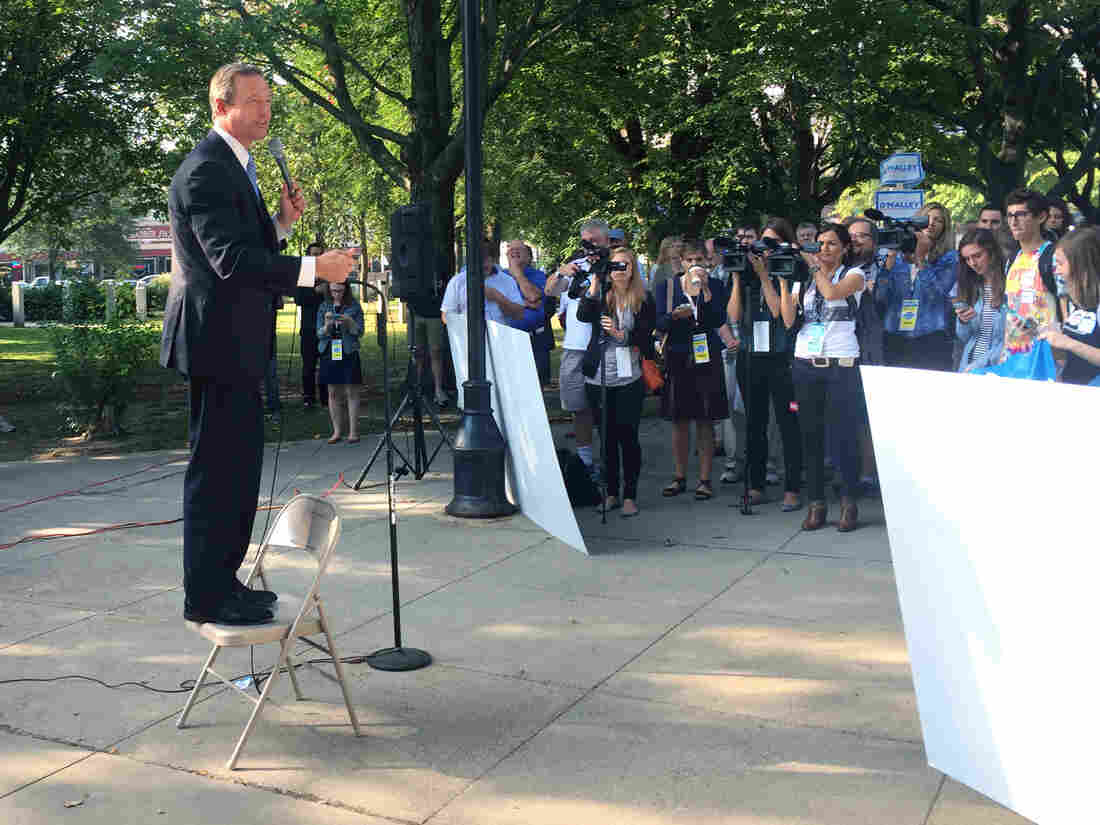 At a recent campaign rally in New Hampshire, only a few dozen people showed up to hear former Gov. Martin O'Malley. Many of them were reporters; others were bused in by the candidate's campaign. Tamara Keith/NPR hide caption 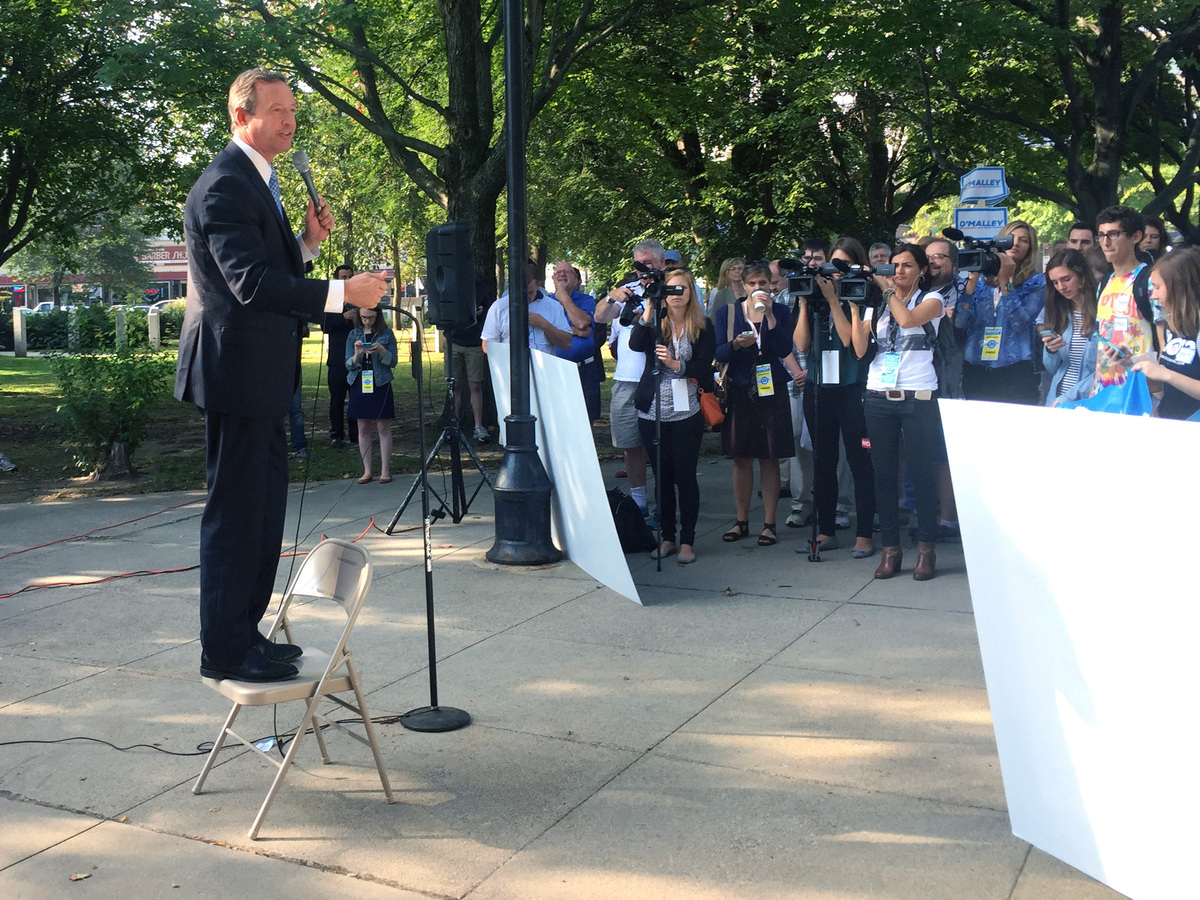 At a recent campaign rally in New Hampshire, only a few dozen people showed up to hear former Gov. Martin O'Malley. Many of them were reporters; others were bused in by the candidate's campaign.

There are advantages to leading a presidential race — you attract big crowds, big campaign cash and have more opportunity to get your message out there.

And then there's the 1 percent. We don't mean the superwealthy. We're talking about presidential candidates, like former Maryland Gov. Martin O'Malley, who are polling at just 1 percent in many polls.

O'Malley recently introduced himself to an audience of politically active Iowa Democrats, saying, "My name is Martin O'Malley. I am running for president and I need your help."

[The] O'Malley campaign paid for us to get bused here, but I prefer Bernie so I'm wearing a Bernie shirt.

And, judging by his fundraising totals and poll numbers, he does need their help.

O'Malley has the look of a man who could be president — good hair, nice suits, a square jaw. And he has a resume to match — two-term governor of Maryland, mayor of Baltimore, progressive policy papers. When asked by NPR what he's adding to the 2016 campaign, he said "new leadership."

"I am of a different generation than many of the other candidates who are offering themselves in this field," he said. "And that brings with it new perspective, fresh thinking, especially about things like our foreign policy, our national security, and the economy we seek to build."

When O'Malley's campaign held a rally outside the New Hampshire Democratic Convention, even a college doo-wop group wasn't enough to draw a large crowd. 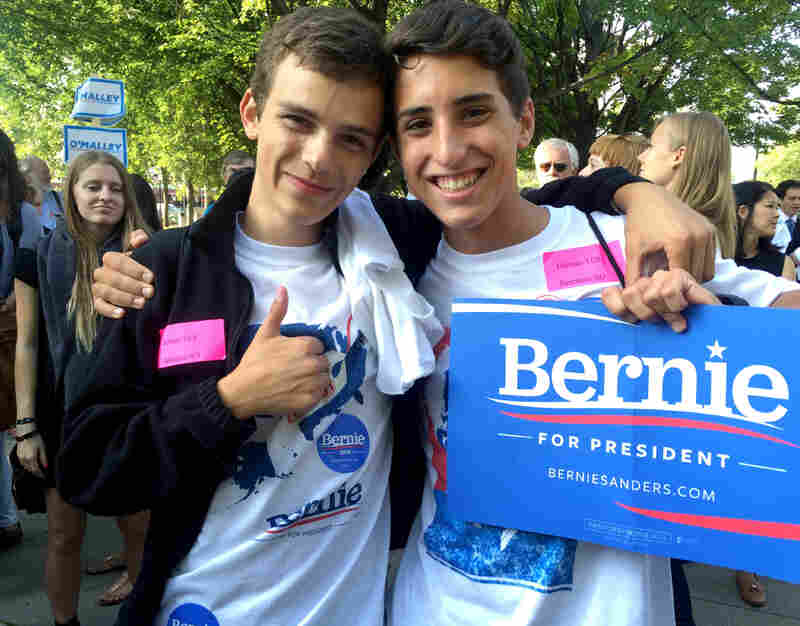 Only a few dozen people had shown up. Many of them were reporters. Others were bused in by the O'Malley campaign.

It is common for campaigns to bus supporters to conventions and buy them tickets. Ben Britt, a student at Tufts, rode the bus but isn't a supporter.

Before O'Malley showed up, a campaign staffer handed Britt and his friends O'Malley shirts to put on over their Bernie gear. And when the candidate jumped up on a folding chair to speak to the crowd, he was optimistic.

"Make no mistake about it, the inevitable front-runner in every race is always inevitable right up until the people of New Hampshire have a chance to have their say-so," he said.

In 1984, O'Malley worked on the campaign of Gary Hart, the Democratic senator from Colorado who surprised everyone by winning New Hampshire. Something that keeps O'Malley going.

"History is full of examples of candidates the rest of the nation never heard of before. Some candidates — one very near and dear to me — who was at 3 percent the first week of January and went on to win the New Hampshire primary," he said.

Of course, Hart didn't win the nomination. Lately, a big focus of O'Malley's campaign has been trying to get the Democratic National Committee to add more televised national debates to its schedule — something that could help raise his profile if he performs well. But between here and there he's trying to win people over one at a time. Outside the convention hall, a woman approached him with detailed questions about Social Security.

Asked about eliminating the cap, O'Malley answered, "Yep. On incomes above 250. I came out with a position on that about three weeks ago. And it's on our website. MartinOMalley.com."

"And what do you think about caregiver credit?" the woman asked. "That's in there as well," he said.

As he walked away, O'Malley turned to a staffer, saying, "How about that. She asked two detailed questions on two details that were in our Social Security plan. That's awesome!"

O'Malley smiled broadly. When you're at 1 percent, every little victory counts.