Accessibility links
A Modest Proposal: Donald Trump For Speaker : It's All Politics No, Trump is not a member of the House. But that doesn't matter. The Constitution does not actually require the speaker to be a member — only to be elected by a majority of those who are. 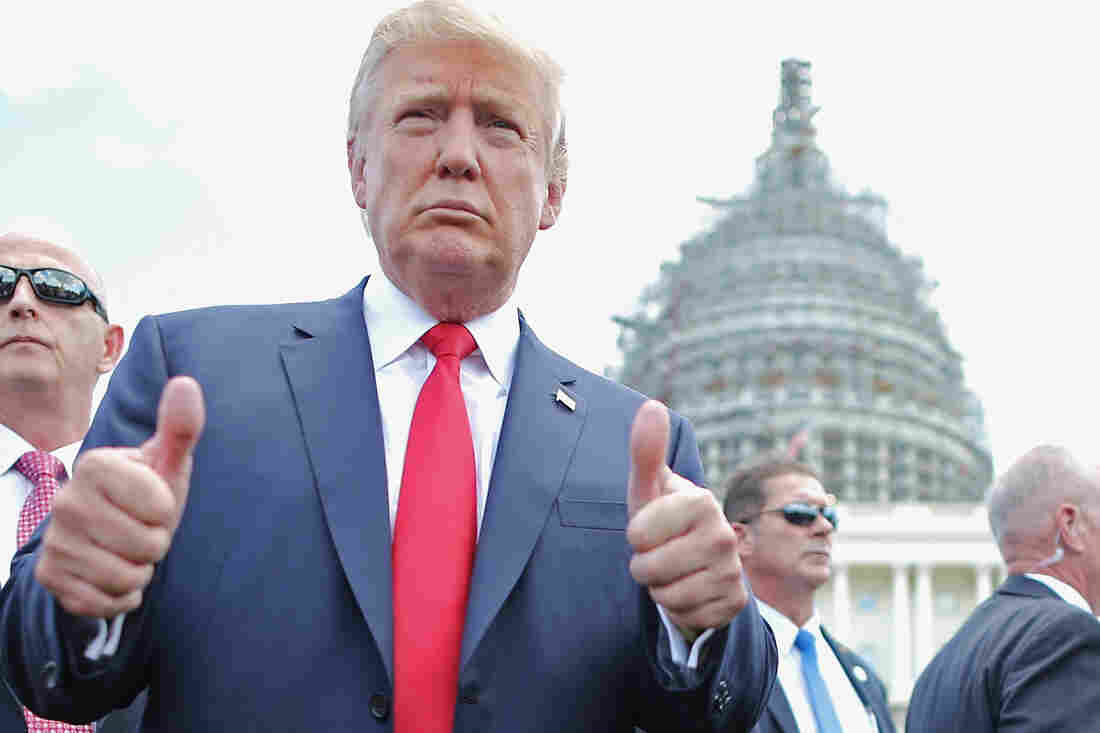 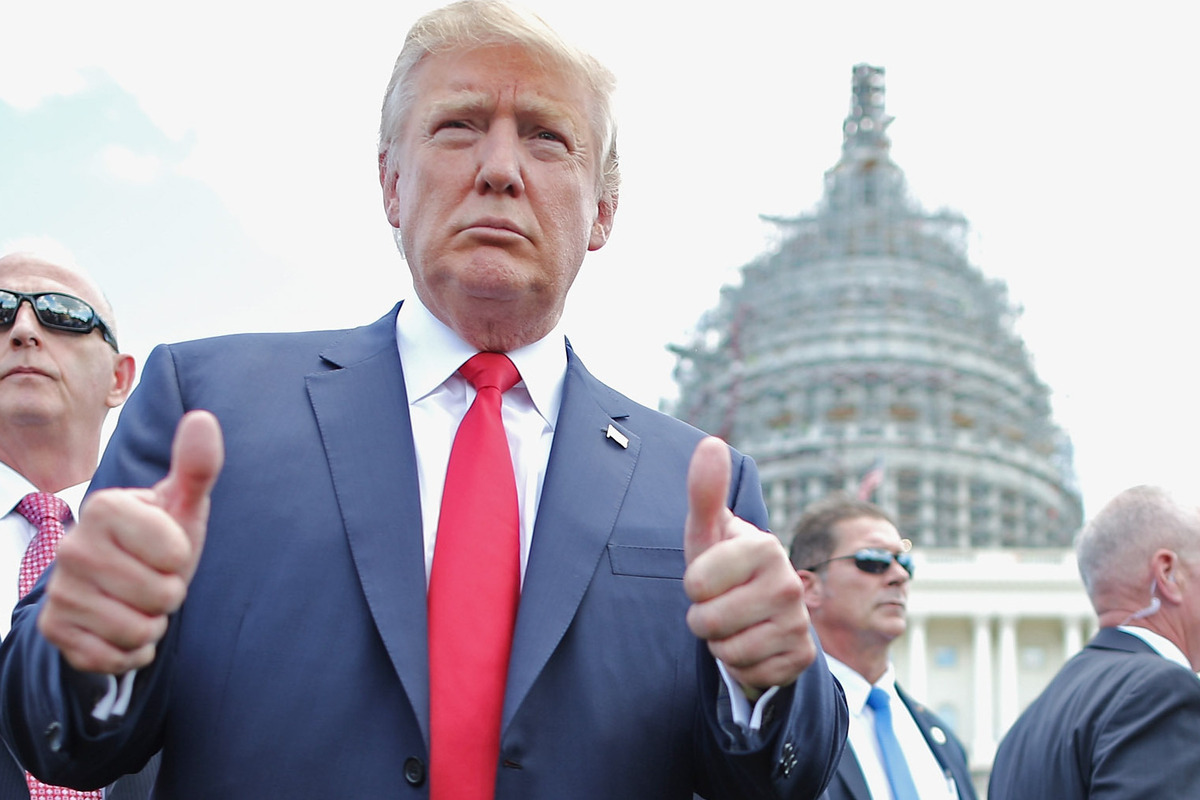 Republican presidential candidate Donald Trump appears at a Sept. 9 rally against the Iran nuclear deal on the West Lawn of the U.S. Capitol.

No, seriously. Bear with us a moment while we explain.

Donald Trump, the ultimate outsider, should be the new leader of the Republicans in the House when John Boehner steps down on Oct. 30. Trump should be elevated to the lofty perch of speaker and lead the conservative cause in its next confrontation with President Obama.

Think about it. This could be huge. Not just for the House, which would be great again, but for Trump — who would take a long step toward his announced goal of being president. Trump would pick up some on-the-job training in Washington ways, especially the intricacies of passing a budget in a shared-power system.

And we know his reputation for negotiating. He wrote a book called The Art of the Deal. He knows all about doing deals. He'll make everyone forget all about that last guy who had the job.

No, Trump is not a member of the House. But that doesn't matter. The Constitution does not actually require the speaker to be a member, only to be elected by a majority of those who are. (It's true! You can look it up: Article I, Section 2.)

Of course, it is more than a coincidence that all 53 speakers up to now have been members of the House. It turns out that lots of members of this club want to be its boss. (It's a little like the win streak that the College of Cardinals has going when it comes to electing the next pope.)

But every once in a while, at moments of crisis in the House, there have been serious flirtations with the idea of an outsider. They elected a freshman speaker for the 12th Congress, which convened in November 1811, eager to start the War of 1812. The outsider of that day was a Kentuckian named Henry Clay. He stuck around a while and definitely got to be huge.

And when Speaker Newt Gingrich was on his way out in the late 1990s you again heard talk of electing a figurehead speaker, someone who could class up the place just by being there. Retired U.S. Army Gen. Colin Powell was mentioned at the time. So was former Sen. Bob Dole, who had been the GOP nominee for president in 1996.

In the end, though, after much fumbling around and a couple of false starts, the House chose Dennis Hastert as speaker. But most people continued to regard Tom DeLay, the House majority leader, as the party's true leading man. Hastert stuck around in the speaker's chair for eight years, the longest time any Republican has had the Big Gavel. He retired in 2007 and became a lobbyist.

The truth is that it's been a while since any speaker had a lot of authority for very long. Nancy Pelosi, the first woman to lead either party in either chamber, ran a rather tight ship and pushed through a remarkable raft of Obama legislation. But her majority lasted only four years, 2007-2011. When she left, she handed the gavel to Boehner.

From his earliest months in office, Boehner was beset by a damnable dilemma. The so-called Tea Party election of 2010 had given him a majority, but it had also given him a sizable intraparty rebellion. Many of the Tea Party newcomers voted for Boehner for speaker but distrusted him. Soon enough, he was cutting deals with the Senate and with the Democrat in the White House.

Boehner saw that as doing his job, and he was still doing it this week, trying to keep the government functioning into a new fiscal year that starts Oct. 1.

But this time was different. This time, House Republicans felt ready to force a floor vote on Boehner's leadership.

Why now? House Republicans, since taking over the majority, had forced Congress to the brink: over Planned Parenthood, raising the debt ceiling, funding for Obamacare, spending levels for domestic programs, tax cuts, executive orders liberalizing immigration and, most recently, an international agreement regarding Iran's nuclear program. Several of these issues remained in the mix this month.

This time, the Freedom Caucus (formed earlier this year) and other elements of the right in the House were willing to force the showdown, not only with the White House but with their own leader as well. They came back from a five-week recess to tell Boehner they were unable to defend him back home any longer.

Boehner felt he could win that vote, and most Hill observers agreed the rebels did not have the votes to force him out or elect someone else. They would lose, Boehner would win and his battered speakership would stagger on.

Someone else can try to lead this majority in the House.