Accessibility links
Donald Trump's Tax Plan Could Be Huge(ly Expensive) : It's All Politics The real estate mogul tried to strike a populist tone in announcing his tax plan. It cuts taxes for corporations and raises them on hedge fund managers, but its cost ... sure looks huge. 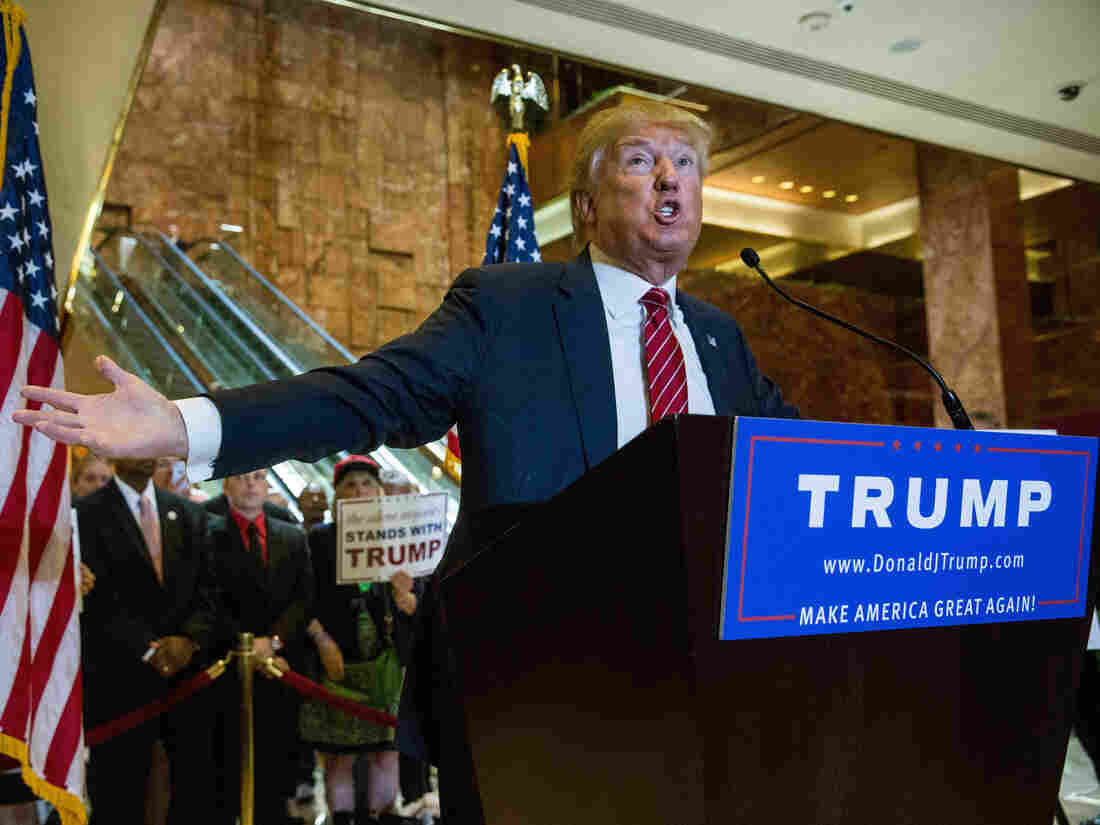 Trump presented his tax plan on Monday, explaining that it would lead to huge benefits for everyone. Andrew Burton/Getty Images hide caption 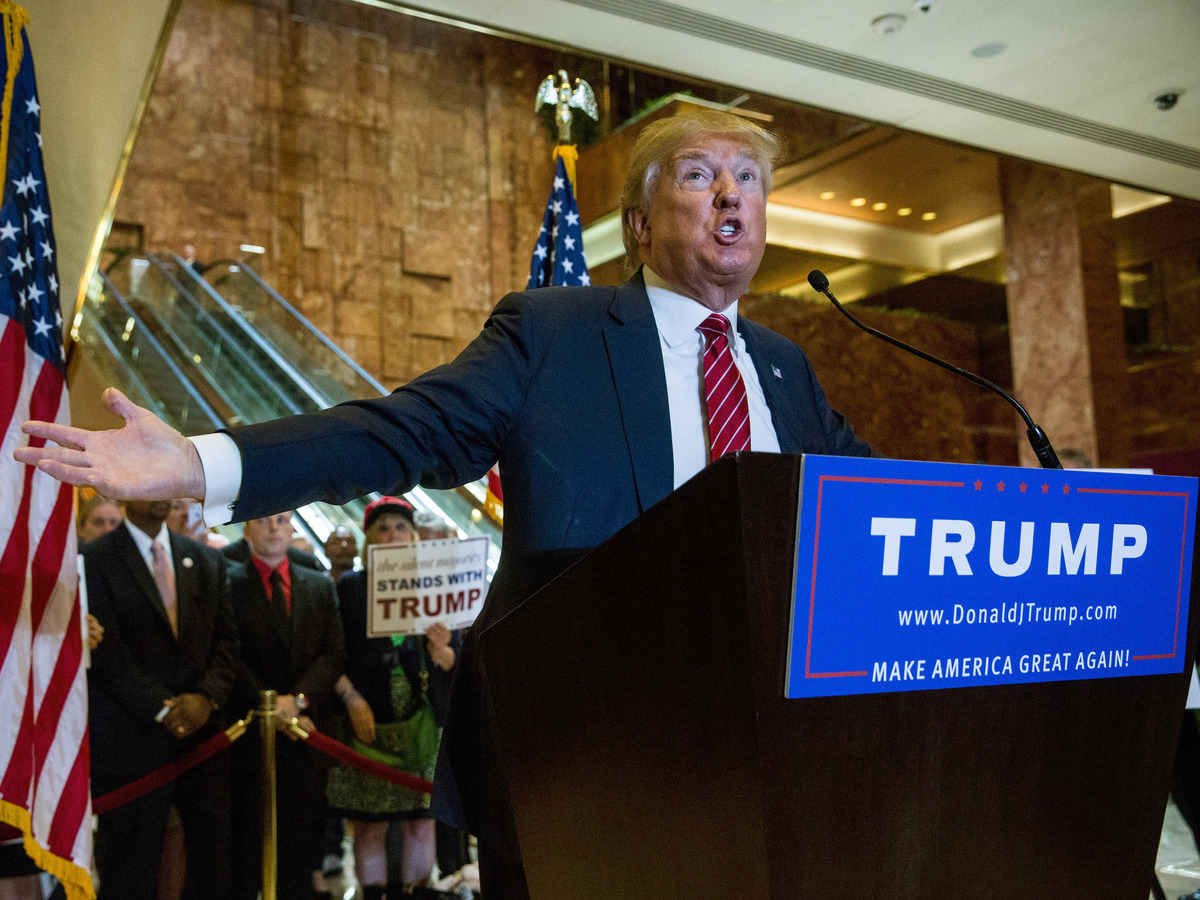 Trump presented his tax plan on Monday, explaining that it would lead to huge benefits for everyone.

Those are just four of the words Donald Trump used on Monday to describe his new tax plan. It sounds like a standard GOP tax plan, with cuts and limits on deductions. But when you look closer, it takes those ideas much further than his GOP rivals do — to the extent that it could cost the federal government trillions of dollars.

So what is he proposing? Here's what you need to know about it:

What does it do?

Here are the highlights from Trump's plan:

How does it compare with other GOP tax plans?

Trump's plan is pretty standard conservative fare conceptually: Cut the number of tax brackets, lower taxes for individuals and corporations alike, and make up for it by cutting deductions and loopholes. That all makes sense from a GOP candidate.

"There are lots of things in here that a tax-policy person would find attractive: low marginal rates are important, [and] an international competitive corporate ratesof 15 percent looks quite good," said Douglas Holtz-Eakin, former director of the Congressional Budget Office and director of the American Action Forum, a right-leaning think tank.

In that sense, Trump's plan isn't all that far philosophically from his fellow candidates' plans. Bush and Rubio have proposed tax plans that likewise slash rates and cut deductions to some degree. Meanwhile, other candidates have proposed more extreme changes. Rand Paul, R-Ky., would "blow up the tax code and start over" with, among other things, a 14.5 percent flat tax. Ben Carson is proposing a 10 percent flat tax and Mike Huckabee wants a national consumption tax.

"[Trump's] is a very conventional, very typical Republican cut-the-rates, close-the-loopholes tax proposal, in that sense not unlike what Jeb Bush proposed a couple of weeks ago," said Howard Gleckman, senior fellow at the Tax Policy Center, an organization run by the left-leaning Brookings Institution. But when it comes to the scale of the tax cuts, Trump's plan is on a much different scale than Bush's. "What's different on this one [compared with Bush's] is it's much bigger."

Trump says that his plan is revenue-neutral, but not everyone buys that.

Think of it this way: Many GOP plans aim to cut rates and broaden the base. Trump's plan would cut rates and in many ways shrink the tax base. In Gleckman's estimation, the Trump plan would add "many trillions of dollars" to the debt.

Consider that Rubio's and Bush's tax plans — both of which feature higher top marginal rates than Trump's — also would cost trillions over the next decade, by some estimates.

Of course, it's hard to ballpark how much the plan would cost; part of the problem is that the plan isn't entirely specific on exactly which loopholes would be closed or how much deductions would be restricted for the highest earners. But, Holtz-Eakin said, it would be a struggle to make up for its lost revenue.

"It's pretty aggressive," he said. "To get the top rate to 25 percent is a lot of work." Then to stack on top of that slashing the number of people paying income taxes and a lower corporate tax rate, Holtz-Eakin added, makes the plan all the more expensive.

In an interview with 60 Minutes on Sunday, Trump also seemed to say that his plan would pay for itself by growing the economy rapidly. But that also doesn't seem likely. In a paper late last year, the Brookings Institution's William Gale and Andrew Samwick found that tax cuts have a minimal effect on economic growth.

So who wins and who loses?

Wealthy Americans could stand to gain a lot. For example, the estate tax (which Trump's plan would eliminate) is overwhelmingly paid by the very richest Americans — the top 10 percent of earners paid 98 percent of it as of 2011.

And while it's true that Trump would limit deductions increasingly for higher- and higher-earning households, it doesn't look likely that those limits would make up for the lower tax rates. As the New York Times' Josh Barro pointed out on Monday, even cutting deductions entirely for the richest people doesn't look like it would make up for cutting the top tax rate by 15 points, as many high-income households already deduct 15 percent or more.

But the price tag of Trump's tax plan could go beyond even that, because then there's the possibility of even lower taxes than 25 percent for some of those high earners. That's because of Trump's plan to extend the 15 percent corporate rate to small businesses, pass-through entities, and freelancers.

Holtz-Eakin fears this could lead to enforcement problems, as some high-earning Americans to try to claim some earnings as business income, thus allowing them to take the 15 percent rate, when really they should be paying 25 percent.

Either that, or it could be incentive for some high earners to become contract workers. But either way, it potentially means even less tax revenue.

Trump's would definitely also benefit some middle-class and lower-class Americans. Right now, many lower-income Americans pay a zero or negative effective tax rate, thanks to tax credits like the EITC. This plan would boost the share of taxpayers paying nothing from 36 to 50 percent, according to the Wall Street Journal.

Trump's team says his plan won't change the EITC at all — that means those who currently qualify for it will still get it, but it wouldn't change a lot more at the bottom of the income distribution, Gleckman notes.

So what's the bottom line? What's Trump trying to do with this proposal?

Here's what Trump himself told the Wall Street Journal: "My plan will bring sanity, common sense, and simplification to our country's catastrophic tax code. ... It will create jobs and incentives of all kinds while simultaneously growing the economy."

That's a heavy lift for one tax reform plan. And while he believes his plan will do all those things, one thing missing from Trump's proposal is a clear central point.

"When I look at Jeb Bush's tax plan, I know what he's trying to say," said Holtz-Eakin, citing Bush's aims to spur economic growth and boost business activity. "With Marco Rubio, it's about growth and families. What is Donald Trump trying to say with this tax code? I don't know."

For example, as the WSJ points out, the plan combines populist touches (like the zero percent bracket) with big cuts for the rich.

It's a plan that tries to please a lot of people at once. But when it comes to tax reform, you can't make everyone happy. And in Trump's case, the plan could please people who both want to cut taxes and who aren't that worried about what the plan would cost — which is to say, it could have a hard time finding many supporters in Washington.