Accessibility links
Romney Calls GOP Tone 'Unfortunate,' Trump Foreign Policy 'Absurd' : It's All Politics The 2012 Republican standard-bearer says the GOP risks losing the race for the White House because of the candidates' rhetoric in the primary.

"I don't think that's going to be Donald Trump" 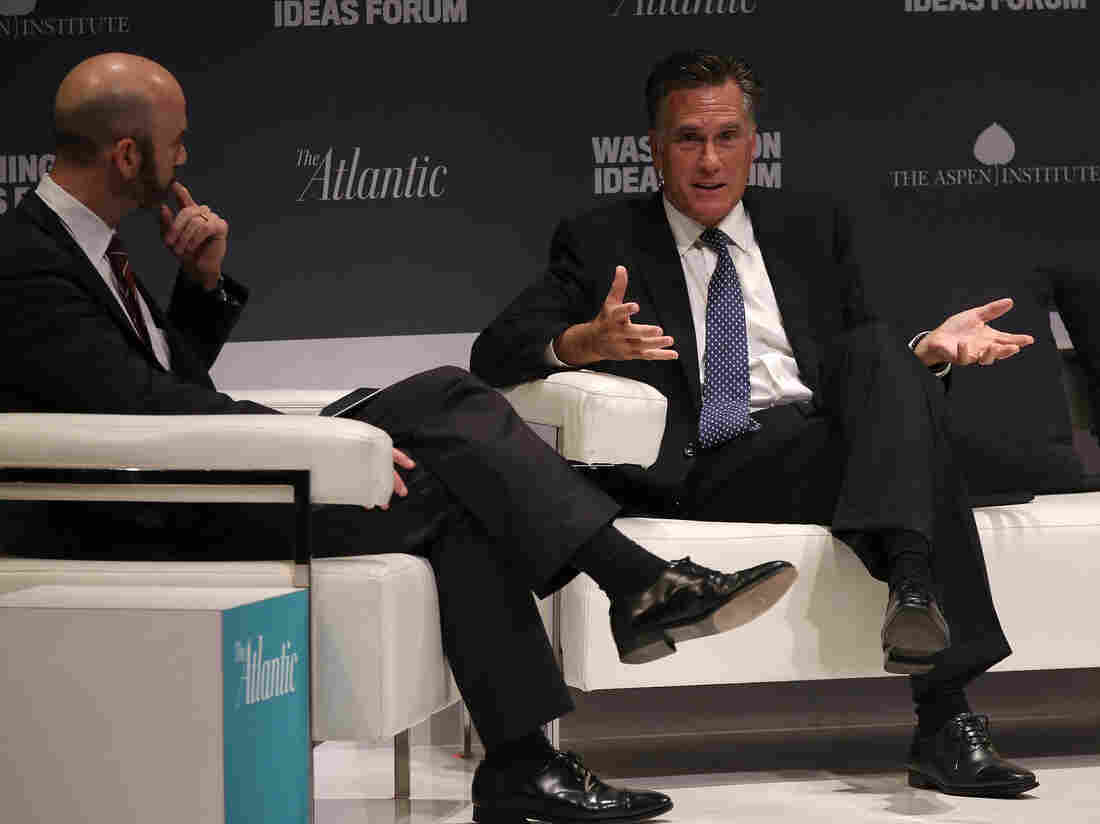 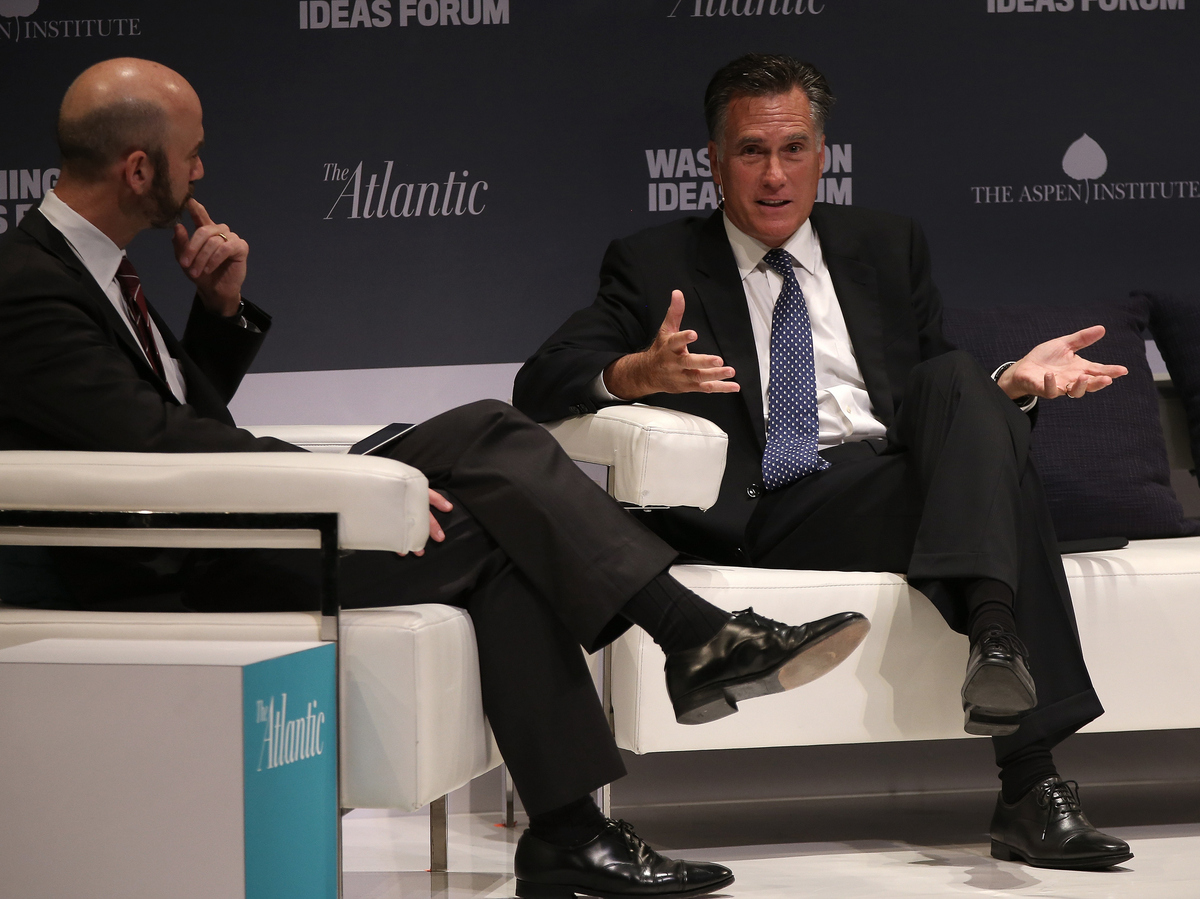 Former Republican presidential candidate Mitt Romney spoke at the Washington Ideas Forum with James Bennet of The Atlantic on Wednesday.

Mitt Romney says he is worried that the tone and rhetoric of the 2016 GOP election battle could hurt the Republican Party in the general election next year.

"I think the rhetoric on the part of some in this campaign has been unfortunate on this front," Romney said.

One of the key takeaways from Romney's loss in the 2012 presidential election was that the rough-and-tumble primary debates pulled him to the right, especially on issues like immigration, and contributed to his poor performance with Latino and other minority voters once he'd secured the GOP nomination.

Romney was interviewed onstage at the Washington Ideas Forum sponsored by Atlantic Media, where he offered some observations and a few admonitions for the current crop of candidates.

"The 11th commandment was quickly lost"

Ronald Reagan famously followed a rule that he thought should be chiseled into stone as an addendum to Moses' original 10.

"THOU SHALT NOT SPEAK ILL OF ANY FELLOW REPUBLICAN."

Asked how that's working out this year, Romney said, with a chuckle — but no joy — "That's kind of gone by the wayside."

When interviewer James Bennet of The Atlantic noted that much of the name-calling is emanating from Donald Trump, Romney noted that Trump himself has characterized some of his own comments as "probably a little childish."

Romney called that a fair characterization, adding, "For a long time a lot of the candidates said, 'I'm just gonna ignore it and not respond,' and I think they found out that did not help them."

Ultimately, Romney said, "I think it's unfortunate to have had the kind of personal attacks that we've seen in the process, I think the 11th Commandment was quickly lost in this race, and I think that hurts us in the general" election.

Romney on the rise of insurgents in the race

"It'll come down to a race between one from each"

Romney has long cited experience as a governor as great preparation for a president. He was governor of Massachusetts from 2003 to 2007. He was asked what he thinks of the current top tier in the GOP race — Donald Trump, Ben Carson, Carly Fiorina — where being an outsider is a prime calling card.

"I wouldn't disqualify someone just because they haven't served in Washington or in a statehouse," he said.

Romney then described the race in sports terms, likening it to the playoffs.

"We have sort of two brackets in our party — the insurgent bracket and the mainstream conservative bracket."

He said the insurgents are getting much of the attention now, but, "I think you're gonna see one or two people emerge — and ultimately it'll come down to a race between one from each."

Romney actually said he might put Fiorina into the mainstream conservative bracket, where he also lists Chris Christie, Marco Rubio, John Kasich and Jeb Bush — that's the order he named them as he spoke off the cuff.

Still, there's a warning. Romney said appealing to minority voters is "clearly one of the things we have to do differently as a party."

He said he believes Republicans need to do a better job demonstrating to minority voters that the party's policies will be good for the economy and good for them, giving them more opportunity.

Romney on Trump as possible nominee

"I don't think that's going to be Donald Trump"

Romney was asked if he'd endorse Trump, should be become the Republican presidential nominee."

"I will support the Republican nominee."

But in the next breath he stated, "I don't think that will be Donald Trump."

He added, "My party has historically nominated someone who's a mainstream conservative, and someone who has a foundation in foreign policy that gives people the confidence they can guide the ship of state over troubled waters."

"I thought that was both absurd and dangerous"

Romney said some of the things Trump has said about how he'd handle ISIS and Syria, for example, are "absurd and dangerous."

Is there any chance you may still get in?

Early this year, Romney flirted with another run for the White House, huddling with top advisers and talking to donors before ultimately deciding against it. It was believed that the presence of Jeb Bush as a well-established, well-funded early front-runner in the race was perhaps the main thing that prompted Romney to take a pass.

So now, with Bush proving to be far from the juggernaut of a candidate once predicted, does Romney have any second thoughts?

BENNET: Is there any chance you may still get in?

ROMNEY: No. I made that decision. No.