Accessibility links
5 Things You Should Know About Jason Chaffetz : It's All Politics The Utah congressman who is challenging House GOP Majority Leader Kevin McCarthy is praised for sticking to his core principles and derided for going too hard after Planned Parenthood.

5 Things You Should Know About Jason Chaffetz

5 Things You Should Know About Jason Chaffetz 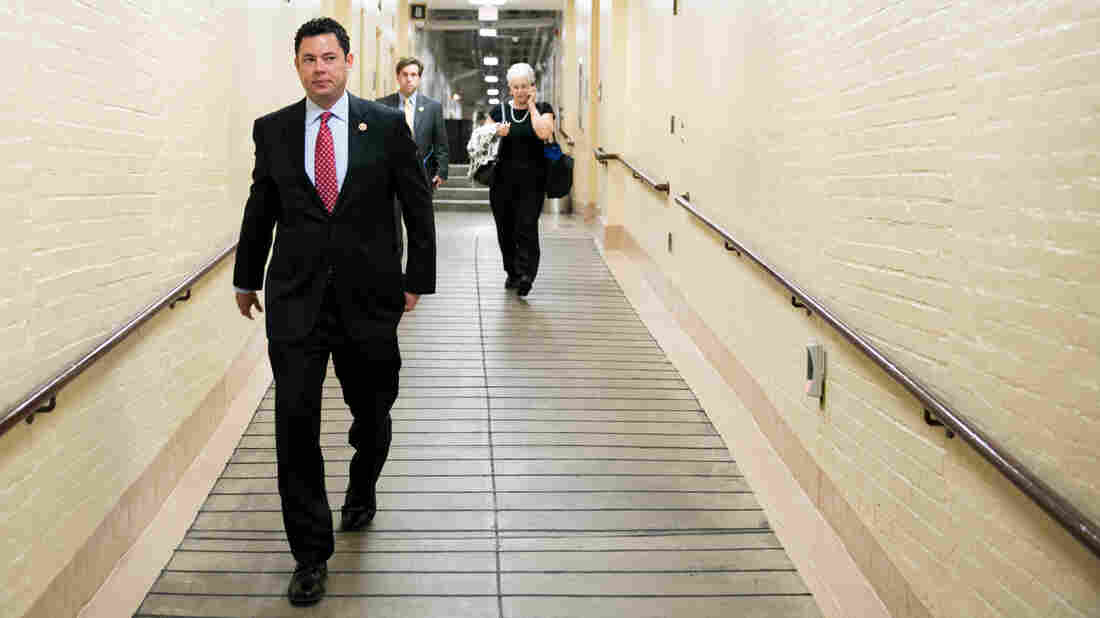 Rep. Jason Chaffetz, who is running to be speaker of the House, has some foes in Washington for going after Planned Parenthood and the Secret Service. But his constituents say they appreciate that he stands up for conservative values. Drew Angerer/Getty Images hide caption 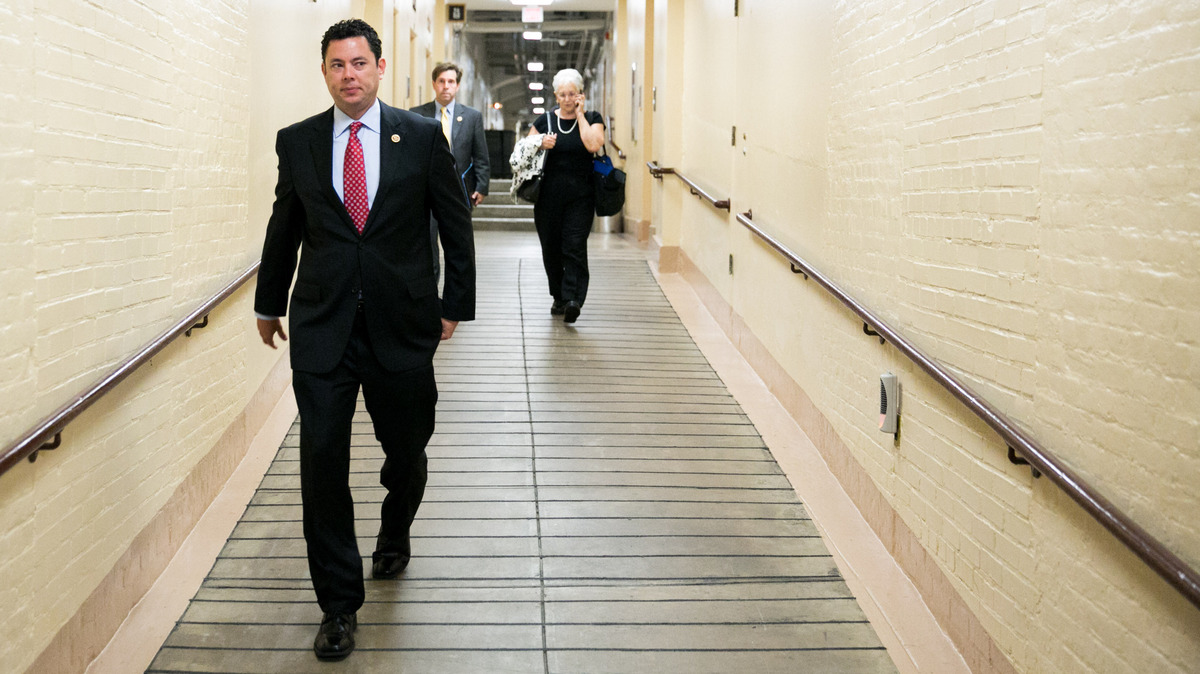 Rep. Jason Chaffetz, who is running to be speaker of the House, has some foes in Washington for going after Planned Parenthood and the Secret Service. But his constituents say they appreciate that he stands up for conservative values.

As chairman of the House Oversight and Government Reform Committee, Rep. Jason Chaffetz, R-Utah, has pushed investigations into the Secret Service following security lapses at the White House, and he aggressively challenged Planned Parenthood. He's now shaking up Capitol Hill even more as a challenger to Rep. Kevin McCarthy, R-Calif., the current House majority leader, in the race for speaker. 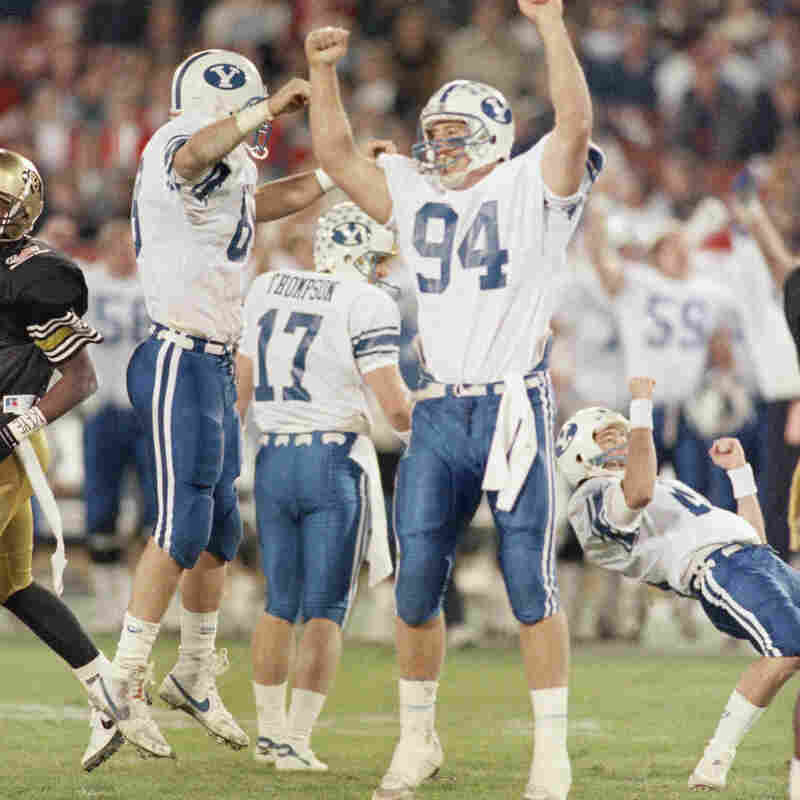 Chaffetz (right) in 1988, then a kicker for BYU, falls to the ground after kicking the winning field goal against Colorado in the Freedom Bowl. Reed Saxon/AP hide caption

Chaffetz is a relative unknown outside Washington, but in his district, which stretches from the southern suburbs of Salt Lake City down through most of southeastern Utah, constituents see him as someone who holds fast to his conservative principles and is quick to challenge the status quo.

"I think it's good that he's willing to stick his nose in stuff to make things different," said Wayne Holdsworth of Utah County, who did not vote for Chaffetz.

Another constituent, Larry Winn, voted for Chaffetz and said, "If he believes in something, he'll go after it like the Secret Service thing we're talking about, Planned Parenthood. He goes after what he's passionate about and I admire that."

Here are five things you should know:

1. He was a placekicker at Brigham Young University

A lot of Chaffetz's passions were formed during his time at Brigham Young University in Provo, where he played on the football team.

Chaffetz was recruited by then-BYU football coach LaVell Edwards in 1985 to be a placekicker. As the Salt Lake Tribune reports, "the young athlete relished pulling off his helmet after a successful boot and fanning his curly locks for the cameras."

2. He used to be Jewish and a Democrat

When he arrived at BYU, Chaffetz was a Jewish Democrat. He even campaigned in 1988 for then-Massachusetts Gov. Mike Dukakis in his presidential bid. Chaffetz has family ties to Dukakis. But by the time Chaffetz graduated from college in 1989, he had converted to the Mormon faith and the Republican Party. He credits Ronald Reagan for much of the shift in his ideology.

3. He wouldn't feed the delegates in Utah

In Utah, delegates are in charge of selecting political candidates in the state, and Republican State Sen. Howard Stephenson said he admired Chaffetz's refusal to spend money on delegates when he campaigned for Utah's 3rd Congressional District in 2007. Stephenson said a lot of campaign money is spent on feeding delegates but Chaffetz refused to buy them anything.

"Not even celery sticks. He said it's not about feeding delegates. It's about meeting with them and if they're not willing to meet with me in their homes or in their local library then I just won't be able to reach them."

And Chaffetz did reach the delegates. In 2008 he ousted incumbent 3rd District Republican Chris Cannon, who failed to get the party's nomination in the primary. Announcing that run in 2007, Chaffetz described himself as a "frustrated conservative" who was "hungry and excited."

4. He always believed in limited government

"He has core principles about limited government, individual responsibility, individual rights and freedom and he believes in those things so deeply," said Stephenson, who met Chaffetz when Chaffetz was chief of staff for former Republican Utah Gov. Jon Huntsman.

Shirley Johnson, who was an assistant to football coach Edwards at BYU, said she's not surprised at how far Chaffetz has gone in his career, but rather at how fast.

"He was real bright and clever and he's articulate. He was more of a loner. Most of them palled around with each other. He just had his own agendas and his own thoughts and he had confidence in himself," said Johnson.

5. He sparred with Planned Parenthood and the Secret Service

Stephenson believes Chaffetz is making a difference in Washington, holding the federal government accountable. "Rather than following the wind and just being a wind vane, he stayed his course."

But staying the course means Chaffetz has gained some foes along the way.

Chaffetz was recently criticized for going too far during a committee hearing with Planned Parenthood head Cecile Richards, repeatedly interrupting and talking over her. He was also criticized for showing a misleading chart during the hearing. The chart, which had no Y axis labeled, appears to show that the overall number of abortions performed is far higher than the number of cancer screenings, when it is in fact far lower according to the organization's statistics.

In March, Chaffetz grilled the director of the Secret Service after a series of security gaffes and misconduct scandals. "This is what's so infuriating," he exclaimed, asking about an 11-minute delay before the agency called the police for a suspicious bag. "You're the director of the Secret Service. It's almost three weeks after the incident and you don't know why it takes 11 minutes to pick up the phone and say, 'Hey, Metro[politan] Police Department, we've got a problem down here; we need your help.' "

Chaffetz applied for a job with the Secret Service in 2003 and was not selected. After the March hearing, his application was leaked to a news website, and a recent report from the Department of Homeland Security's inspector general found that 45 employees at the agency had accessed "sensitive personal information" about Chaffetz around the time of the hearing.