Accessibility links
Meet The Obama-Era Kids Who Are About To Be First-Time Voters : It's All Politics We asked young voters to share their earliest political memories, and we heard about praying for George W. Bush, family members losing jobs and fears of terrorism.

Young people loved President Obama in 2008 — they turned out to support him more than any other recent Democratic presidential nominee. 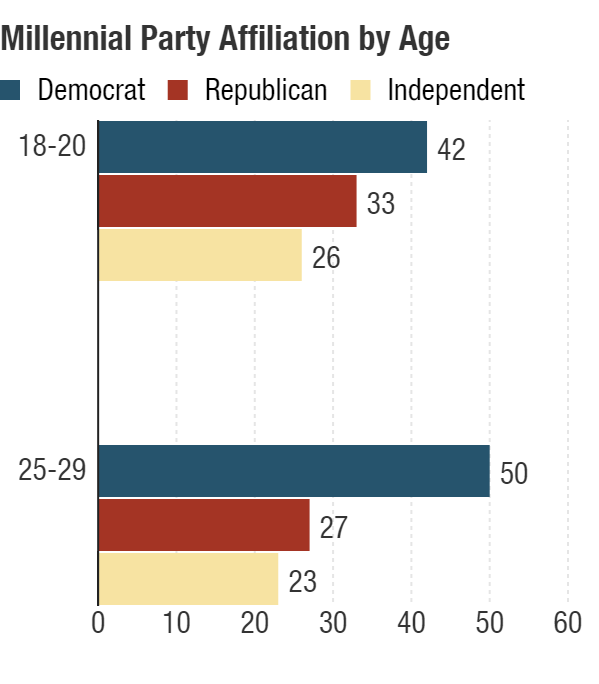 Older millennials, ages 25-29, many of whom were first-time voters in 2008, seem to lean more left than younger millennials, who will cast their first vote in 2016. (Percentages are rounded and may add up to more than 100.) Harvard Institute of Politics hide caption

But now, there's a new crop of young voters — the kids who came of age during the Obama presidency. They're are all grown up, and getting their first chance to vote for president.

They grew up in a different era — after Sept. 11 attacks and in the middle of the recession.

There's some indication that younger millennial voters are not as left-leaning as their big brothers and sisters. However, more still identify as Democrat than Republican, and a lot can change before they cast their first vote for president in 2016.

We asked first-time voters to share their earliest political memories, and we heard about praying for George W. Bush, family members losing jobs, fears of terrorism and the Daily Show. Here's what they had to say:

What Was Your Earliest Political Memory?

We met first-time voters at the University of New Hampshire and at Harvard's Institute of Politics National Campaign conference, which brought in college students from across the country.